i ramble about my favorite wikipedia articles

If you can’t tell from the title, I love scrolling through Wikipedia. Yes, the website that your middle school English teacher probably rained hellfire on about how you should never ever use Wikipedia as an academic source. But can you use Wikipedia as a source of entertainment? If you’re me, a former Quiz Bowl competitor⁠01 not that you <em>need</em> quiz bowl experience to enjoy wikipedia who goes bonkers over useless trivia, then yes, you can. I go nuts over this site.

I should probably use Wikipedia as a source of academic knowledge that might help me with my courses and future career, but reading about completely useless trivia is so much more fun. If you’ve known me long enough, there’s probably been a time where I randomly dropped a piece of trivia onto you. My roommates can attest to this.

For example, did you know that Martin Scorsese⁠02 btw i've never seen a martin scorsese film , who is “regarded as one of the greatest and most influential directors in film history” according to Wikipedia, was the voice actor for that pufferfish guy in Shark Tale?⁠03 do kids these days even know what </span><i>shark tale</i> is? am i already growing old? Did you ask for this information in the first place? Probably not! But now you know! 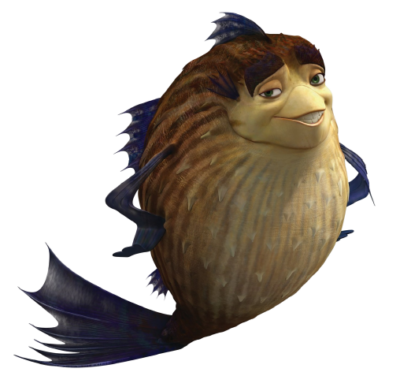 they even gave him martin scorsese’s eyebrows. they gave a fish eyebrows

On top of that, I even found a site called The Wiki Game. The objective is that you start from one article, and you have to navigate to another article within two minutes using the hyperlinks on the page.

For example, if you have to go from Tank to Soybean, you can go:

The goal is to go from one article to the other with as little clicks as possible, as fast as possible. The more paths you find, the more points you earn. When I found out about this game, I ended up playing it for three whole hours, which is why I try not to play the Wiki Game on busier school days.

It’s been awkward explaining The Wiki Game to people. “You know when you read an article about automatic transmission and you click on a bunch of links and somehow end up on the article for Cincinnati, Ohio?” Imagine if that was a game.”

I’m a sucker for the retro cyberpunk-y sci-fi aesthetic. There was this film in 1985 called Max Headroom: 20 Minutes into the Future that was produced in Britain, and it was about a news reporter whose memories are used to generate an A.I. version to replace him after he gets into an accident.⁠04 one of his last memories is getting knocked out by running into a low-clearance sign labelled 'Max. Headroom 2.3m,' hence the name On the other hand, The Max Headroom Show was more like your typical TV show back then—music videos, a talk show segment, and a special guest—except that a “computer-generated” host ran the show instead of a human being. 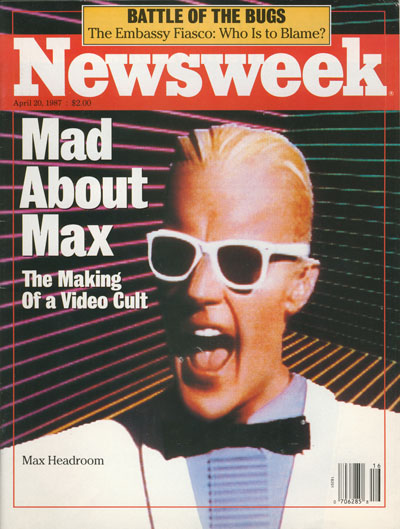 The reason why I read this article every so often is because the history behind Max Headroom is just as interesting to me as its premise. Max was supposed to be this satirical take on the male, white American television host and newscaster, but he became a huge cultural sensation in America to the point that he appeared on a Coca-Cola ad. He got a reference in Back to the Future Part II. Whether or not the Americans got the satirical joke, they seemed to be obsessed with him for a little while. 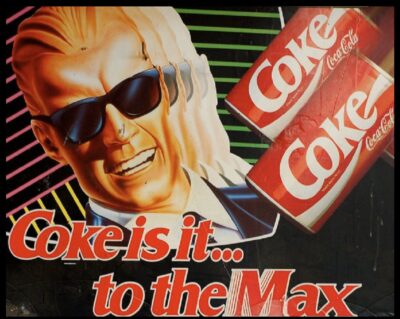 At some point, the hype died down. This interview by The Verge caught my attention, specifically a quote by Max’s actor Matt Frewer:

It was this bizarre, short, sharp shock over the course of four or five years, where the show seemed to be the biggest thing on the planet: I was on the cover of Newsweek, and then it disappeared.

Fun fact: I actually found out about Max Headroom not through the show itself, but through one of the most infamous examples of television signal hijacking, where someone in a Max Headroom costume interrupted two television stations in Chicago back in 1987. I’m not going to link the video here though because it’s actually kind of creepy.

Hacks at the Massachusetts Institute of Technology

Whoa, something in this post that’s actually related to MIT! Since hacks get covered by the blogs pretty often, this section is going to be relatively short.

The article sums up why I love the concept of hacks so much:

Although many traditional college pranks have involved maximizing embarrassment or inconvenience for a victim or target, often with a personal or political point to make versus harassment, such antics are usually disparaged by MIT hackers as “unimaginative” or “boring”.

Often the target of a hack is an abstract concept (e.g. bureaucracy or “political correctness“, or entropy), and the prank may or may not be aimed at any specific individual. Even when an individual is targeted (e.g. the “disappearing office”] of newly arrived MIT President Charles Vest), the jest is good-natured, often eliciting admiration rather than anger from the “victim”.

It’s not just the joke, but that there’s a warm-heartedness and a deep-rooted curiosity of “can we do this” that I think makes these hacks very “MIT.” Even if these hacks do tease someone, like Harvard getting their butt kicked by Yale, they’re rarely malicious and instead rely on creativity and humor. That’s fitting for MIT, I think: breaking convention and thinking outside the box.

Like this Halloween, some hackers put a wizard hat and a wizard cape on the Alchemist. I was having a crappy Monday until my friends mentioned that there was something going on with the Alchemist. I went over after my 8.01⁠05 physics – classical mechanics lecture and remember becoming, like, filled with euphoria. This is the first large MIT hack I’ve seen! It has a freaking wizard hat! 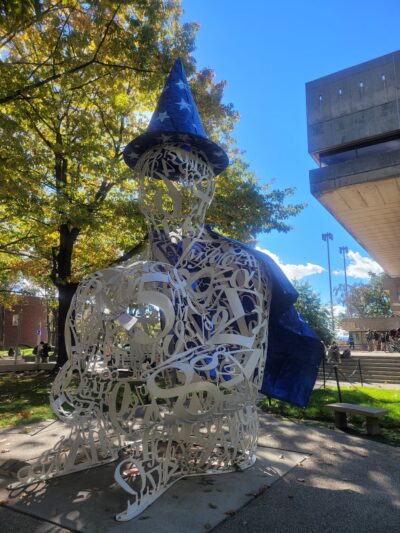 if you look closely, it even has a beard!

Hacks are fun. They’re a celebration of curiosity, the alluring possibility that an idea can become a real thing no matter how ridiculous it might seem. 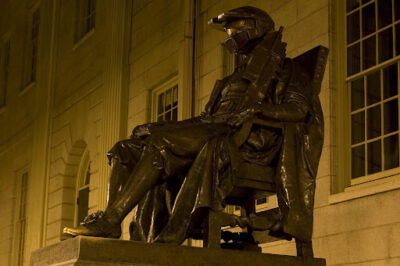 These messages were created to warn people in the far future not to dig up nuclear waste repositories. Sandia National Laboratories, one of the National Nuclear Security Administration laboratories in the U.S., said that these repository sites should have warning messages with varying levels of complexity:

This place is a message… and part of a system of messages… pay attention to it!

Sending this message was important to us. We considered ourselves to be a powerful culture.

This place is not a place of honor… no highly esteemed deed is commemorated here… nothing valued is here.

What is here was dangerous and repulsive to us. This message is a warning about danger.

The danger is still present, in your time, as it was in ours.

The danger is to the body, and it can kill.

The form of the danger is an emanation of energy.

The danger is unleashed only if you substantially disturb this place physically. This place is best shunned and left uninhabited.

I can’t exactly place why I return to this article every couple of months, except that there’s something both sad and beautiful about…everything in this, I guess. It’s a way of mankind’s reckoning with the destruction it can cause. 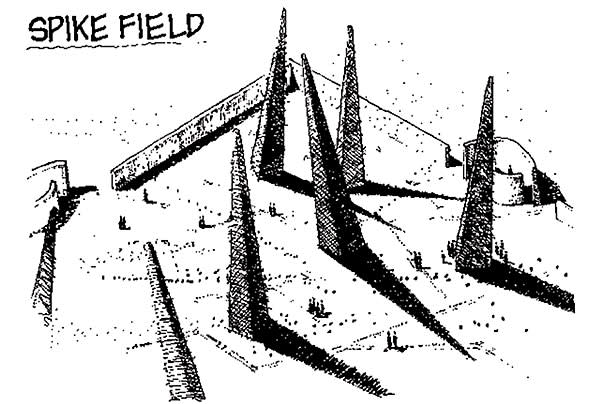 This project didn’t stop at written messages. People suggested intimidating architecture like spike fields and artificially created landscapes of rubble to scare visitors away. Someone even went as far as to propose “atomic priesthood,” a panel of experts who would keep knowledge about where different nuclear waste repositories are located, as well as communicate their dangers through rituals and myths.

It’s hard to think about the possibility that I could contribute to something that people will warn future inhabitants about down the line. We made this, and we used it to destroy each other. Don’t be like us. Save yourselves.

If the worst case scenario happens, maybe someone with a sense of humor will make a witty take on the matter and turn it into a cultural sensation. Maybe a few people in the audience will remember it. 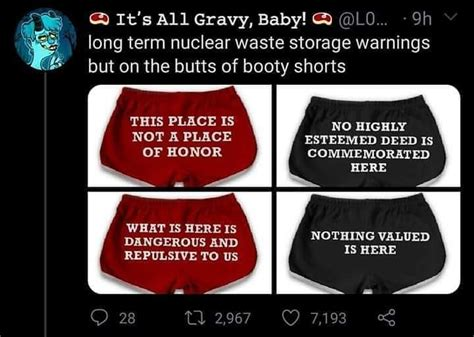