Anyways, Monday 1/4/10 marks the beginning of IAP 2010. For those unfamiliar with IAP (Independent Activities Period), it’s basically the whole month of January during which …MIT students do whatever they find worthwhile – whether it’d be a mini-internship, starting/continuing an UROP, learning to snowboard, making pottery, or (gasp!) taking a class (many people do. ‚ò∫)

From what I’ve heard, some of the most popular offerings that fill up very quickly include the beverage-related activities (such as A Taste of Scotland: Single Malt Scotch Whisky Tasting Seminar, In Vino Veritas, and Thirsty Ear Beer Connoisseur Class (all with legal age and ID’s as prerequisites of course). Also with competitive enrollment is the IAP beginner glassblowing class, which uses a lottery system; students will learn the basics of making beautiful projects like this: 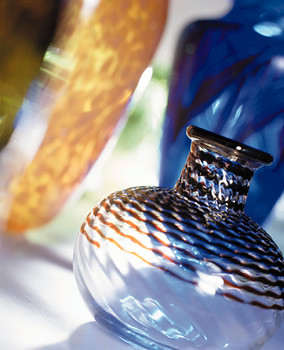 (Credit: The MIT Glass Lab-http://web.mit.edu/glasslab/sales_labsales.html)
Luckily, my suite-mate Evie got in this class -can’t wait to see what she makes!

& Finally, a search for “IAP” on the blogs homepage will pull up some more personal experiences worth reading.
—
Here’s a preview of my first IAP – which I’ll surely blog about in the coming weeks.

• P.E. ice-skating @ 10 AM on MTWR – I’ve been ice skating before, but am no where near comfortable on ice. Here’s a chance to change that. You might wonder why I should subject myself to something @ 10 AM four days a week, why, it must be because I have a math class at 12 PM and would not like to rush in between; plus I just found out p-sets for that class are due at 11:45 AM…good call on my part. Pat pat. Without further ado, the aforementioned obligation that will try to monopolize my IAP…

• 18.02A– This is a continuation of 18.02A in the fall semester, during which we finish learning multivariable calculus. After completing half of the course in December, students choose to complete the second half during either the spring semester or IAP (which I believe is the choice of many since IAP grading is still pass-no record). But IAP 18.02A consists of daily lectures and recitations twice a week, four difficult p-sets, an one-hour exam, and a two-hour final. It will be a pain in the rear, but surmounting the math GIRs during IAP means room for other classes during the spring!

• Java/Python/C++?? – So there’s a bunch of IAP offerings on programming. The options include Postscript, Python, C, C++, Haskell, and Java. I have not heard of half of the aforementioned languages, but gathering from Chris’s latest post, 630 MIT students are course 6! I have got to taste some of this, the computer science part that is. So if I find time, I will try to attend one of these programming series.

• Paint my room bamboo – personal goal; wonder how this will go.

• Take/practice for the Swim Test! – shhh… <size=”1″>I still haven’t taken the swim test (100 yards consecutively any stroke you prefer) that we were supposed to have taken during orientation or by September 24th … or by Oct. 30th as the last email from MITPE commanded…Maybe it’ll get done during IAP?

Feel free to discuss your new goals for 2010 – now that apps are, for the most part, history!