More details about the transition to Halloween than you ever wanted to know.

This is Anna Ho, reporting live from her transition to being 21 years old.

(Sidenote: a fun consequence of having a Halloween birthday is that whenever you go to the doctor’s office and state your birth date, the nurse/doctor/receptionist says WOW!!! YOU’RE A HALLOWEEN BABY?? SO’S MY (sister/brother/cousin/friend/aunt/nephew/arch nemesis/husband/estranged son-in-law/daughter/stepson). Everyone seems to know one Halloween baby.)

Wake up, open computer. Facebook notifications up the wazoo.

I went out to lunch at a Japanese restaurant with Cam ’13. Om nom nom: 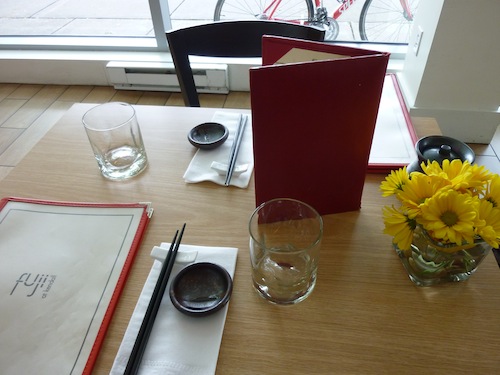 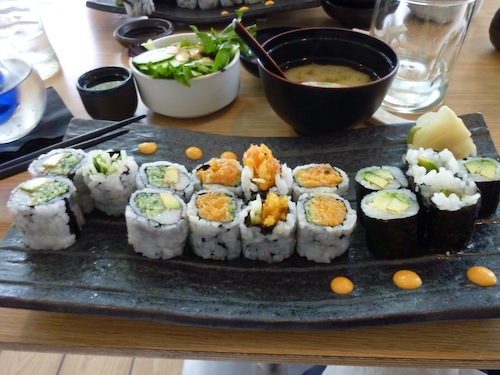 The staff got wind that it was my birthday, so this arrived after the check: 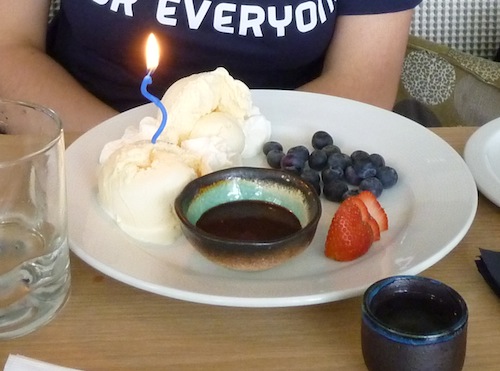 After lunch, I had Pistol PE class. Mike Conti (the instructor, and author of this) gave us a talk on gun safety.

After Pistol, I booked it over to Harvard Square, where Davie ’12 and I went to an exhibit about using toys to communicate basic science concepts. The exhibit took up one room, and we were the only people there — I liked that, because it felt like I had my own set of toys that I could play with at my leisure.

Can anyone PLEASE explain to me how this works? 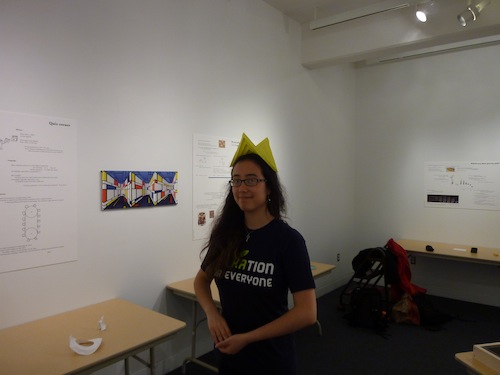 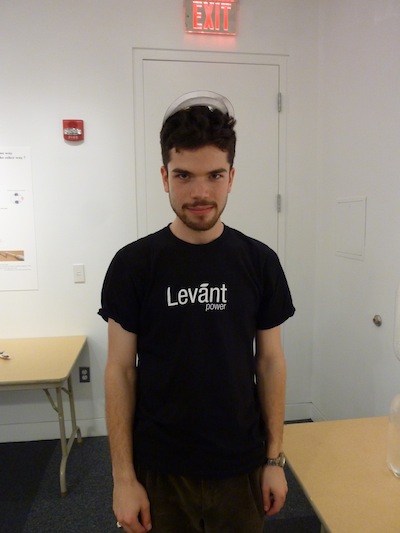 At around 11:50pm, Sarah ’17 knocked on my door to give me “a tour of French House” (because I need one after living here for three years). She took me to the Maisonette, then back to my room, then to the kitchen, where people were waiting in the dark… 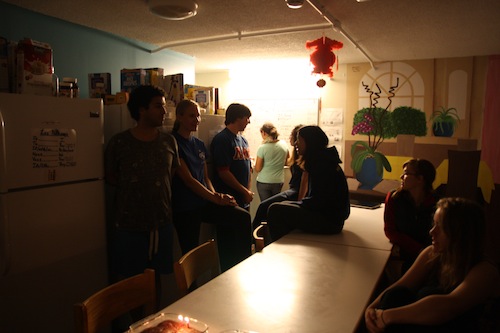 As I rounded the corner, someone hopped out and stuck a hat on my head. French House sang Joyeux Anniversaire, and dark chocolate lava cake was enjoyed by all. 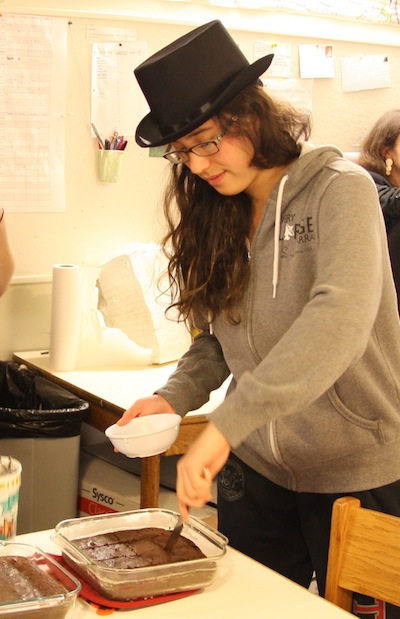 Afterwards, Sophie ’14 led me to her room, where the other 2014s were waiting with a bottle of wine. We toasted, and I had a small (LEGAL!) drink.

Thank you for all the birthday wishes, everyone! <3

Pre-exam breakfast of champions: a piece of toast, a bowl of chocolate frozen yoghurt, and a banana.

21M.235 (Monteverdi to Mozart) class. We discussed the score of a Bach French suite (No. 5 in G) then listened to the piece. A suite is a collection of dances — to listen to, though, not to actually dance to. The No. 5 in G has an allemande, a courante, a sarabande, a gavotte, and a gigue. (Gigue is now one of my favorite French words.) Between each movement, there is a switch in character, and the G major triad is outlined by the first note of each movement. Also, Bach “is nothing but contrapuntal.”

Then, we moved onto a Scarlatti keyboard piece (K. 264 — the K number is important because, in my music prof’s words, “I can’t tell you how many Sonatas in E there are”). For our purposes, this piece represents a shift from the Baroque concept of a keyboard piece (represented by the suite) to a single-movement work. This is the beginning of what we call the “sonata” form of the late 18th century. Scarlatti’s piece was intended for courtly entertainment; in contrast, Bach’s piece was intended for keyboard pedagogy.

Finally, we listened to the Sonata in F Major (“Prussian” 1) by Bach’s son Carl Philipp Emanuel (CPE Bach). The so-called “Prussian” sonatas were all written for Frederick the Great, who CPE worked for. We listened to a clavichord recording of the piece; at the end, the clavichordist (clavichordist?) played a lovely cadenza. Fun fact: CPE’s treatise on keyboard playing was one of the first books devored by a young Hayden, while he taught himself to be a composer.

12:35pm – A bench at the intersection of Building 1 and the infinite corridor.

I bought a box of salmon/avocado sushi, a bottle of “mighty mango” Naked juice smoothie, and made camp at one of the busiest places on MIT campus. I’m LaTeXing the Quantum II professor’s handwritten course notes, as part of my quantum rehab program. I like working when there are strangers frantically speedwalking past me; it’s both energing and non-distracting, because I don’t know any of these people.

Just kidding. My friend Sam ’14 appeared, looking for a place to crank out 20 minutes’ worth of a pset. I offered him the spot next to me, so now I have company :)

I lied about being surrounded by strangers. My friend Davie ’12 just appeared, also en route to finding a place to pset. While giving me a very energetic hug, his bike helmet clattered to the ground. He actually picked me up during the hug, which is no mean feat; I hope his back is okay.

“In relativity, we’re going to use the principle of maximal aging. And this goes back to what we were talking about, about different kinds of time. So we’re sitting here in 6-120, which we’ll call a lab frame, or Frame S. And we can measure the time it takes for an object to go from spacetime coordinates A to B. That’s the time that we would measure using this clock, watching something roll across the floor. Like if a mouse came out. There used to be a rat that lived here and came waddling out a couple of times a few years ago. I think he’s dead now.

Now if the rat were relativistic, and had a wristwatch on its neck, it would measure a different time. It would measure its wristwatch time. So remember, this is an absolutely cornerstone idea of relativity: there is something called wristwatch time, proper time, observer time, that is attached to whatever object you’re watching move around. And that clock is always at rest with respect to that object. And so our statement of the principle of least time is that this trajectory occurs…such that the wristwatch time from A to B is minimized.”

“Metrics in general relativity are called g. I have a friend whose license plate is GMuNu*…that metric refers to flat spacetime.” *g^(μν)

5:26pm – The floor of the French House maisonette

My sister and her friend and Asra ’17 are studying for an 18.701 (Algebra I*) test, with the help of Adam ’15. I just got home, after an 45 min-ish Skype chat with an astronomy professor at BU. I had some questions about the astro grad school application process, and he was very helpful. I also passed along my boyfriend’s message that he gave an excellent talk at the recent DPS conference.

*Not the kind of Algebra I you’re thinking of.

This evening, I made a Trader Joe’s trip and bought the following: a baguette, brie, a bottle of sparkling pink lemonade, and two boxes of strawberries. “For a midnight birthday celebration?!” you ask. No. I made the Trader Joe’s run because I’m going to spend the next 4-5 hours trying to finish all of my fellowship applications, and I want to make a party out of it.

I went to put my laundry in the dryer, checked my mail, and found a very sweet birthday card from my grandma. I LOVE YOU GRANDMA! :D

Cheers, screams, bangs, smoke. The Red Sox just won the World Series, and we have a spectacular view of Fenway Park out the window across the river.

I have some very punctual friends. :)