My Freshman Journey with Internships by Cami M. '23

or: i get rejected a million times in a row

I wanted to write a comprehensive post on my experience with being a freshman applying to internships.

I also want to preface this post by saying it is extremely rare for freshmen to get internships. Often times, companies want more experienced students, like upperclassmen, rather than hiring frosh. And in the case that the program is freshman and/or sophomore exclusive, the internship tends to be more competitive and difficult to get.

Prior to coming to MIT, I had one internship before, but the application process was rather untraditional. We applied through our high school and our teachers would nominate select students to participate. I didn’t really have that much experience in writing cover letters or a resume; in fact, I didn’t even know where to start. My resume was honestly kind of a mess in the beginning of the school year and, in hindsight, I should have gone to CAPD in the beginning of the year.

At this point in time, I wasn’t even sure what field of internship I was looking for, seeing as I was undecided on a major, I just knew I wanted one.

Every September, MIT hosts the fall career fair. This is a pretty big deal at MIT, where all students are even given the day off of classes to go. I had prepared the night before by cleaning up my resume, albeit not very well. The next morning, I printed out ten or so resumes to bring to the fair with me.

Overall, the fair was a pretty overwhelming experience. I got a lot of “Sorry, we’re not looking for freshmen” or “We prefer people with prior experience.” Essentially, the career fair was a slight bust due to my lack of experience and near empty resume.

I spent the night emailing the companies I had visited, thanking them for their time, and I got a couple friendly responses, but nothing really that promising. I remember being excited by a chemical engineering company that had replied to me that wanted a follow up in the spring.

Overall, I had no idea what I was doing. Essentially, I was throwing my resume in the faces of big-named employer who wanted nothing to do with a snot-nosed frosh which is, well, pretty understandable.

It was also around this time that I just started to give up in my internship search and come to the conclusion I should probably just UROP instead.

Around late-December and early-Januaryish, I received an email dormspammed⁠01 To message out to every dorm on campus. advertising a new computer science internship opportunity.

At this point, I had narrowed my interest to wanting an internship in computer science, management, or media. I decided to check it out and I realized it was perfectly up my ally, as it was designed to be more of a mentorship program rather than a pure internship, so it was good for those with very little experience.

I also was currently taking an intro to CS course and was working a UROP, so I knew I had things to add to my resume and some beginner experience.

Revitalized by all of these things, I decided to take on the internship journey once again. I scheduled multiple appointments with the CAPD offices, doing resume and cover letter reviews. These also gave me huge confidence boosts, as my reviewer told me I had a lot of potential and my experiences were really good. With every edit and meeting, I felt better and better about my chances about getting an internship.

Simultaneously, I was crafting an excel document to keep track of my internships. 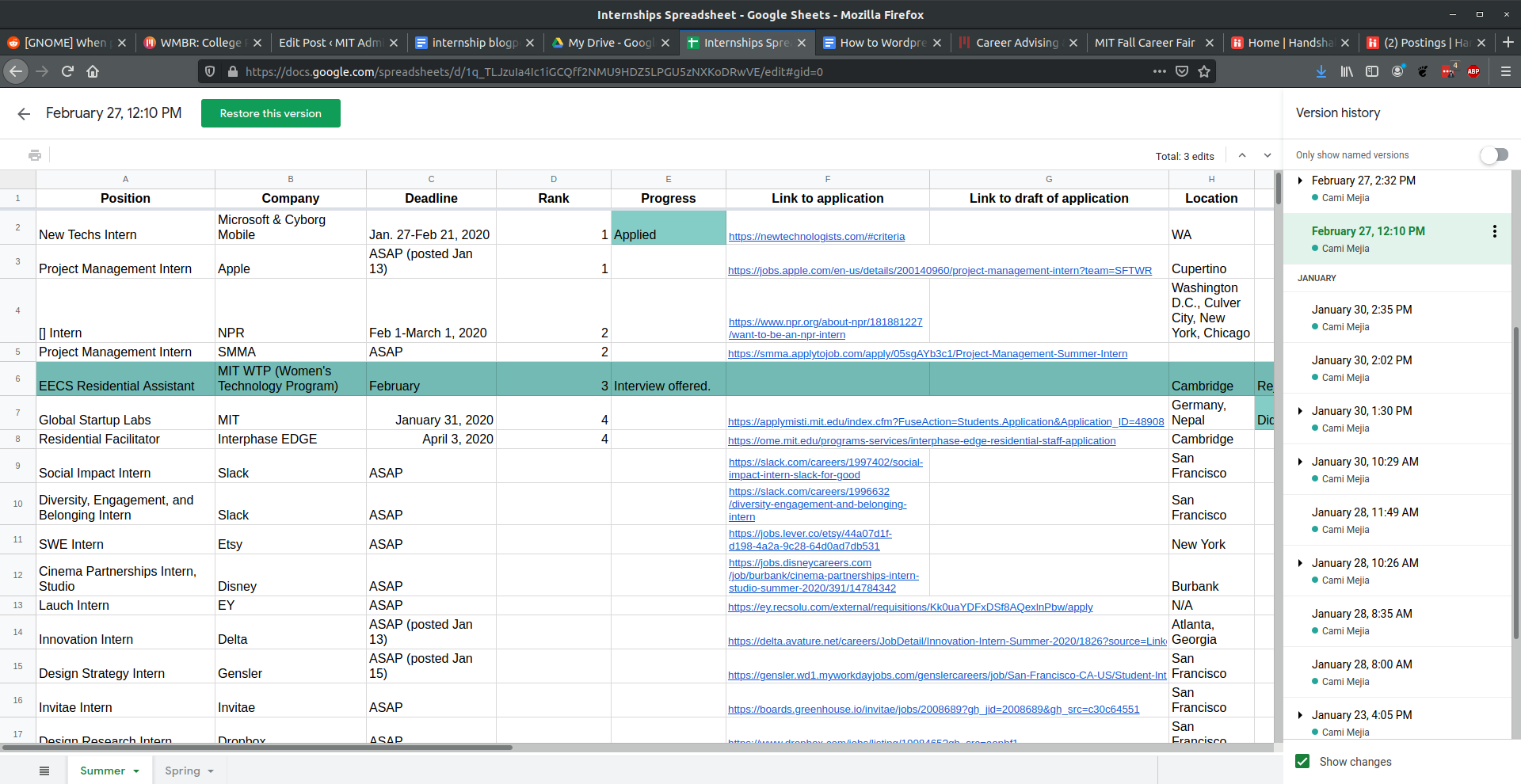 This is an old version of what I had, but essentially I split it up and ranked the internships, as well as color coded them to keep track of where I was applying, rejected, and accepted. Overall, this organization worked really well for me, and I’m probably going to continue to use this spreadsheet for the future.

Spring semester started in February, halting my internship progress. I felt good about the places I applied to, having two companies that I really, really wanted. But I tried to remain neutral.

In March, I made it to the second round of the intro CS internship mentioned earlier, which almost made me pee myself with excitement. I really wanted this internship, but seeing as it was a CS internship, I wasn’t really sure if I was qualified for it, so making it to second round showed that my efforts hadn’t gone to waste. I returned once again to the CAPD offices for help, since this second round now called for five short essays. I had about a week to complete these essays, so I dedicated the majority of my time to the essays.

Obviously then, the shitshow that is COVID happened and we were sent home.

Internships were being canceled left and right. My hopes were quickly drained. An internship I had applied to announced that they were canceling their internship program for the summer. I wanted to cry.

I was holding out hope for that intro CS internship. I got waitlisted. I stared at my ceiling every night that week before they announced waitlist decisions, hoping that some higher power would fulfill my wishes to give me the internship I wanted.

The following week, I was rejected. I felt pretty defeated, but ultimately was proud of myself for making it that far in a relatively competitive program. I pretty much gave up on looking for an internship and started researching different summer UROPs on urop.guide.

Then, in the middle of a Discord call with Aiden and Raymond, I received this email: 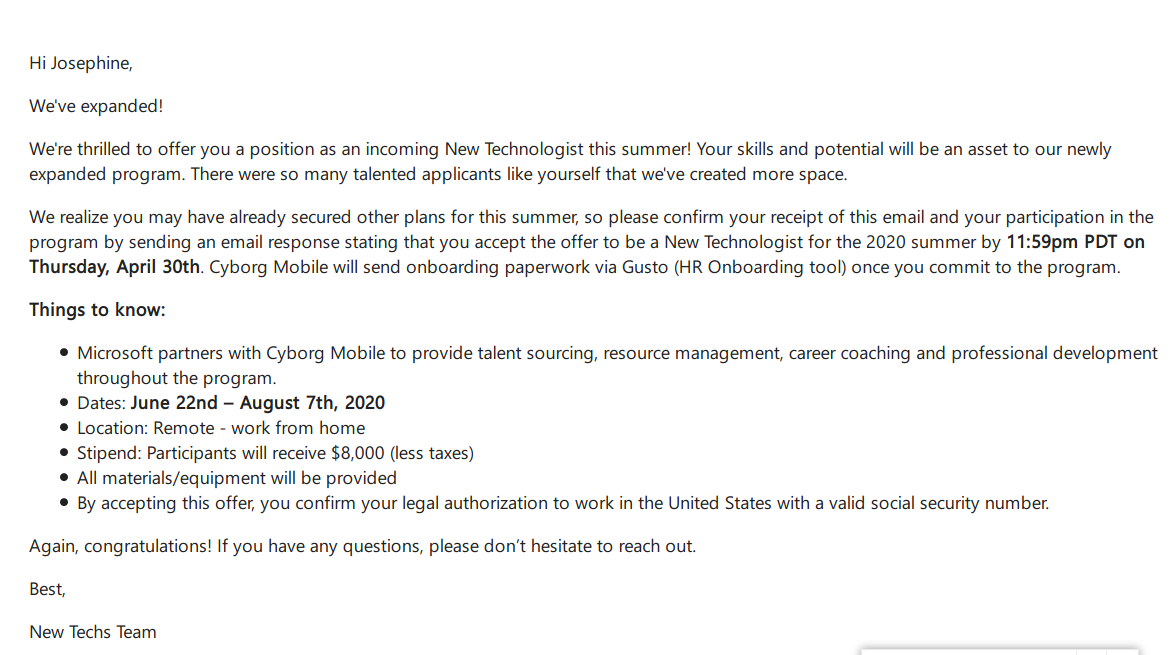 So, turns out because the program was made remote or something, the program ended up expanding. To put it in perspective: Over 1700 students applied to this internship and 75 were accepted. They then expanded the program to accept more like…90-100? I’m actually unsure.

I just yelled “Oh my god I got an internship” in the call and read the email out loud. Aiden and Raymond congratulated me, with a comment from Raymond that was something like “Sucks it’s remote, though” which, yes, true. But I was just happy to get one in the first place.

I ran from my desktop to my bedroom with tears in my eyes, my hands shaking as I went to go call my mom and tell her the news. She congratulated me, saying I got it because I was “unbelievably quirky” (an inside joke).

I set up my direct deposit, filled out some background checks, signed some forms. I joined a LinkedIn group and was pleased to see familiar names in the group chat, as some other MIT students had gotten the internship as well.

Now, I’m just eagerly waiting for June. I’m super excited to be working with Microsoft and Cyborg Mobile to learn app development, as it’s something I’m really interested in, along with webdev. I wanted to blog about my experience since I think it was a pretty big part of my freshman year that I haven’t really talked about as much, but probably should mention.