I flew back home on the eighteenth with hopes of having a productive break. I made plans to paint, work out, write, study, and a whole other slew of things. Unfortunately, my break didn’t exactly go according to plan.

On December 20th, I went to Raymond’s birthday party with Emma. Five of the eight people in crabmeats are from southern California so we made sure we would see each other over break.

On the 23rd I met up with a couple of good friends from high school — Ethan, Harsheta, and Xerxes. We chatted and caught up, telling each other about our shenanigans at our respective colleges.

For the 24th and 25th, I spent time at the house. I saw my cousin, a senior at USC, and we caught up. She said she’d be visiting Boston later in January and would love to meet up with me. I told her about my internship worries and woes, boy troubles, and so on. As someone who grew up without siblings, my cousins were the closest things I had to a brother and a sister. It was really nice to be able to just sit down and talk about my college experience to someone who had been through it already.

On the 26th, I drove into LA for the first time! I had been before, but I’d never drove there myself. I drove to Santa Monica to see Emma and we spent the day together at the Promenade. She showed me all her old hangout spots she frequented throughout high school. Later, we met up with Raymond and some of his friends from back home for sushi. Worst mistake of my life. We had 50+ orders of sushi, which is roughly about 400+ pieces of sushi split among 5 people. I never want to see another piece of sushi again in my life.

For the days since then, I’ve been in a bit of a rut. 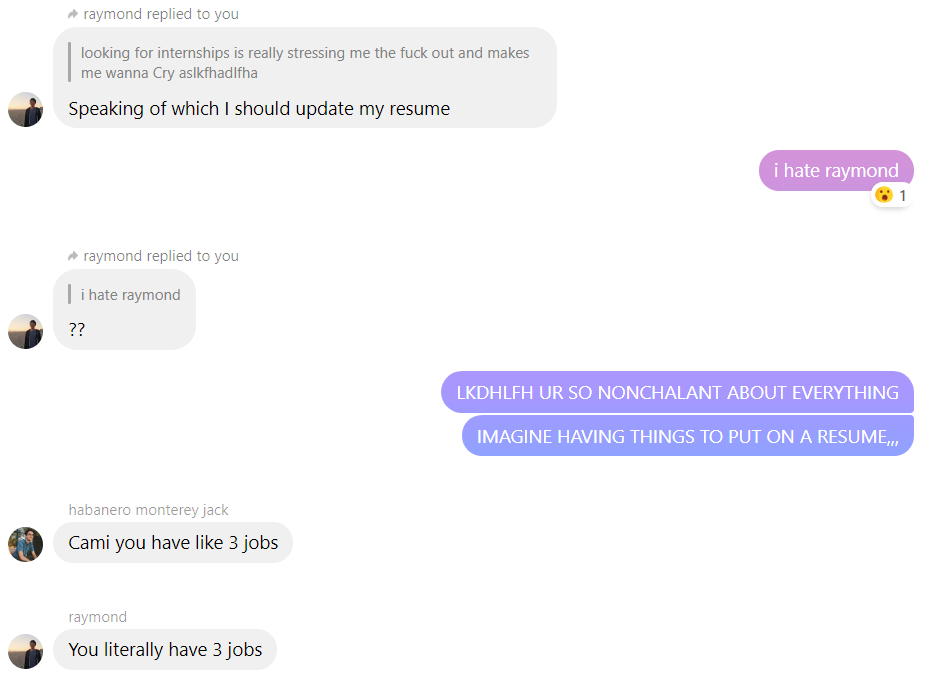 I’ve been freaking out a lot about internships. Being a comparative media studies and computer science major with…no computer science experience? has been a little bit disheartening, to say the very least. I look around at my friends like Aiden and Raymond who already have a lot of accomplishments under their belt, whether that be from their past robotics competitions or their own CS projects. But when I look at the things I’ve done, it’s a bit of an empty canvas.

They’re not wrong — I do work three jobs. But they have little to no relevance to the fields I want to enter. In the past couple of days, I’ve looked for more media based internships, since that’s a field I have some (see: very little) experience in.

I’ve also been continuing my major crisis, realizing I want to find some way to combine my interest in media, computer science, biology, chemistry, finance, and design into one cohesive degree but most likely can’t.

The past couple of days have been a series of whispering quiet pleas to my empty room, begging for some magical being up above to give me an internship that I’ll love and enjoy, staring at the FireRoad app as I try and fit all of my interests into a schedule with dying, and searching endlessly for an ounce of motivation to do the things I actually need to do.

I thought writing this blogpost would be a good start, since I don’t want to break my streak of at least a blogpost a week.

[Speaking of blogging, I really wanted to thank anyone who’s made it this far in the post and to the people who consistently read every single one of my blogposts. I remember at an EC party I went to, these two girls from BC walked up to me and hysterically told me that they read my blogs and it was one of the most memorable and craziest moments of my life. I am extremely touched by anyone who takes the time to read these posts, especially since I use this platform as a journal of sorts to keep track of my time here at MIT. I do receive every e-mail you send me, and if I don’t reply, I’m sorry! Sometimes I forget to reply. But I do read them. I even have a couple of the really sweet messages saved. My friends are also really thankful, too. Sometimes the blogs go a bit to their heads. They like being mentioned and like trying to squeeze their way in. I’ve told them they can write guestposts but they’re too lazy to write. Anyway, detour ending now.]

After this I’m hopefully going to get some of these things done:

I’m hoping my internship woes quiet soon. They flare up every so often, but I’m usually able to ease them by talking to crabmeats. But, since crabmeats aren’t here right now, it’s been a bit harder to get rid of my insecurities.

I also have the Miss Massachusetts Teen Pageant⁠01 I'm a contestant in the pageant! I joined it on sort of a whim because I wanted just a fun experience and I'm kind of excited. coming up on January 11 and 12 so I’ve been prepping for that! I bought my dress and am planning to go on a huge shopping spree on Newbury when I get back.

I’ve been balancing all these worries, from internships to pageant preparation to teaching myself Python, without actually doing anything and it’s been kind of exhausting. I’ve been in a strange state of perpetual stress, despite being on winter vacation. But then my friend sent me a tweet from none other than the ever iconic Eugene Lee Yang⁠02 One of my idols. I wrote multiple essays about him when I was told to write about a role model. He's a member of the YouTube group The Try Guys. He's one of the reasons I found the courage to pursue media studies in college. Seeing his art fills my heart with so much joy and inspiration. I love him a lot. :

Yesterday, I slept at 4:30AM and rolled out of bed at 5:30PM. I felt like shit about myself, feeling like I wasted yet another day being unproductive and useless. But reading this tweet honestly made me feel so much better. I realize I’ve been doing nothing wrong this entire break, because there is no wrong way to spend your break. A break is a break for a reason. And if you’re looking for some sign telling you to drop your worries and your stresses because it’s vacation, here is that sign!

Happy break y’all. Spend it wisely, and take a break!!!