When I was a child I was a nerd.

(I know this comes as a big shock to many of you. But it’s true)

Being a nerd, I did nerd things. I read a lot of Star Wars books. I wore a fanny pack in the front with extra glasses cleaner and wax for my braces. While other kids did their fifth grade science reports on, say, baking powder volcanos, I did mine on The Physics of Baseball.

Also, I went to nerd camp.

In 1998, when I was about to enter the 6th grade, my mom got a flier for something called the Talent Development Institute, or TDI. TDI was supposed to be a camp for “talented and gifted children.” Other than being REAL GOOD at reading, I didn’t know what my talents or gifts might be, but I went anyway because hey, camp.

“Talent Development” turned out to mean “do a lot of really cool creative things with other geeky children.” That first year, I dissected birds, took my first creative writing class, and learned how to make a turtle to move around a computer screen using the MicroWorlds programming environment, the basis of which was developed here at MIT.

I spent two more years at the camp, taking more programming classes (including my first HTML class), river biology experiments, improv, and lots of other stuff.

Then, when I entered my final year as a camper, the director approached me and said: hey, why don’t you come back next year and teach a class?

Wait, I thought. You mean I get to come back to camp, and you’ll pay me to do so?

My first summer teaching at TDI was summer of 2001. I taught movie-making to 7th-9th graders using iMovie. Later, I added music production with Garageband. I also ran the “Active Games” evening activity – lots of capture the flag and shakes and minnows – and helped out the overnight supervisors in the dorms.

So I started teaching at TDI 10 years ago. And, with the exception of last year (when an important family obligation intervened), I’ve been there ever since.

Last night I returned from TDI 2011. Hence my radio silence on the blogs (and Facebook) for the last week or so.

TDI was, as it has always been, an incredibly rewarding experience. This year was different, however. It was rewarding in a new, scary, good sort of way.

See, when I started attending TDI, nearly all of the staff were experienced, local middle school teachers who helped out for this one week. But because TDI has been going on for so long, and because the community is so strong, more and more alumni began teaching as I did. And now, nearly the entire staff are not only TDI alumni, but – more importantly – former students of mine.

This turns out to be a pretty trippy experience. There are serene, professional instructional staff at the camp now who I first taught as drippy-nosed, hyperactive ten year olds. And all but the very oldest campers were not yet born when I first attended TDI.

This is all a bit scary. But it’s also very rewarding. This year, I turned over control of movie making and music production – which had become two of the most popular classes at TDI – to four of my former students to run. I taught class in Digital Literacy and took on more overnight duties. So my former kids had the opportunity to grow and challenge themselves, and I had the opportunity to think about new, interesting things I’d like to teach and do.

It’s also been incredibly rewarding to see these kids grow up into real people. Many of my former students who are now staff are about to enter college. One of them was first introduced to music production in my class as a 6th grader, and he plans to attend conservatory for classical guitar next year. I can’t even begin to tell you how proud that makes me feel.

Beyond all of this old-age reflection I’ve been undergoing, there’s also just the good, clean fun of being at camp. Here are some vignettes from the week that was:

Kriff & Julia are undoubtably two of the most adorable campers to ever step foot on TDI’s campus. Kriff is 11 and Julia is 10.

Here’s Kriff, on my shoulders: 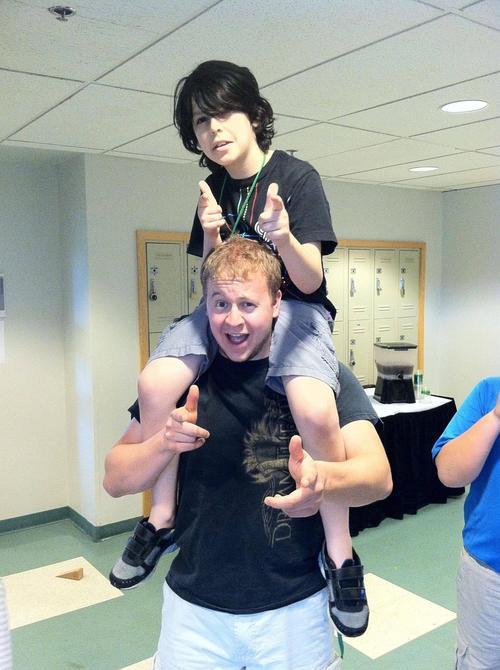 Before this picture was taken, Kriff – who stands at about my waist – was right in front of me, looking up and talking earnestly. As I listened and nodded, I spread my arms apart above his head, as if I were going to crush his skull between my hands.

At that moment, Kriff flung his arms around me in a hug. And I said, “aww, Kriff…I can’t crush your skull like a paper bag now!!” And he looked up at me, grinned, and piped up “why? Because I melted your resolve with my warm embrace?”

So I threw him up on my shoulders and told my buddy Max to take a picture, to which Kriff yelled “hey, I’mma do the Fonz. Ayyyyyyyyy”

What didn’t go so well for Kriff, however, was the dark chocolate tasting exploratory session:

Here’s Julia, with my longtime friend (we were fellow campers at the inaugural TDI in 1998) Emily and I: 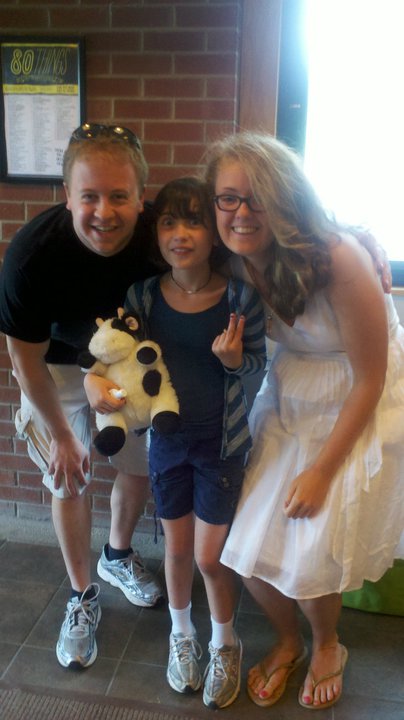 Julia was absolutely hilarious. She always had a pair of pink superballs with her and would throw and chase them. She made her website (in my digital literacy class) all about a pair of talking velociraptors, complete with dialogue.

For my friend Emily’s class “Artist Block Party” – basically a “make whatever you want during arts & crafts” deal – Julia made a bunch of little puffball people. Not content with having made these people, she then made “Extreme Puffball Adventure Park”, a sort of Six Flags for them all to play on:

Many of you may know Reveille, the iconic wake-up bugle call that serves as an alarm clock for campers everywhere. I used to make one of the campers who played the trumpet play it every morning, but he didn’t bring his trumpet this year. So instead, every morning at 7:00 AM, I went with something a little bit different:

One thing that probably needs explaining is that I am the King of nerd camp. Years and years ago I nicknamed the unruliest among them “gremlins”, and ever since, I have been nigh-worshipped as “The Gremlin Lord.” It’s applied Machiavelli: I am both loved and feared, as you can see (for a split second, around :43) in this trailer from the movie making class, “TDI: The Movie Trailer”:

Keenan, Grady, and Jamison are all former students of mine who are now staff, and Jamison taught the Improv class this year, which inspired the concluding pun. 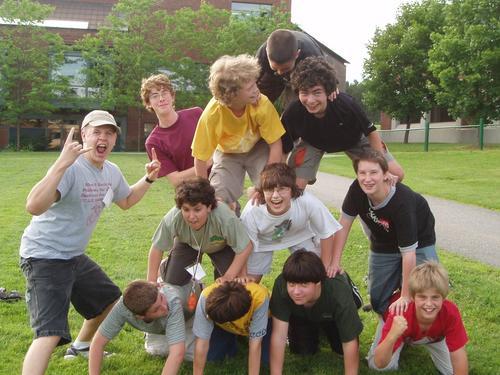 As I was going through pictures for this post I found this photo from 2007, when I orchestrated a human pyramid from a bunch of the campers. Grady – the kid in the white shirt in the center of the pyramid, now a teacher and attending UVM in the fall – had commented on it saying something to the effect of “TDI will be my family forever.” I feel the same way. I’ve been involved with TDI more than half of my life. And I never feel as good, as relaxed, and as at peace with myself and the world as when I am back there.

So here are my takeaways from TDI, for all of you out there:

Always remember the example you set for others, especially those younger than you, because one day they will fill your shoes.

What matters most in life is family, broadly defined: those whom you have grown with, whom you support and who support you in return, because they are the people who will always fill a particular place in your heart that nothing else quite can.

And finally: never, ever be ashamed to be excited by the things you love, even if they are things from your childhood like nerd camp. Because they are totally worth your excitement and enjoyment now as much as they ever were.