This past Saturday was CSC’s (Chinese Students Club) Lunar New Year banquet. For $10 ($8 for members), attendees got to sit at round tables, eat exorbitant amounts of Chinese food, and watch a variety of different performers wow and dazzle them on stage. This year was the first time that I had gone (they host one every year), so I didn’t really know what to expect, but I was excited because the headliner was Shin Lim, a Boston-based magician who had previously appeared on Penn and Teller’s show Fool Us. More on this later.

Anyway, it just so happened that the banquet coincided with the arrival of the eastern seaboard’s very own polar vortex, so the trek over to Walker Memorial where the event was to be held was fraught with chattering teeth and stinging faces. According to weather apps, the real-feel temperature with wind chill factored in at the time was -22 degrees Fahrenheit. For perspective, I saw a chart on the internet that claimed just 30 minutes in -22 degree weather would be sufficient for frostbite. Thankfully, we were indoors for most of the trek across campus. Hooray for living in Maseeh!

Katherine ’17, Cathy ’17 and I managed to snag an unreserved table in the back with a fairly direct view of the stage. The tables were nicely set with gold spray-painted centerpieces and flowers, in addition to the programs for the night. 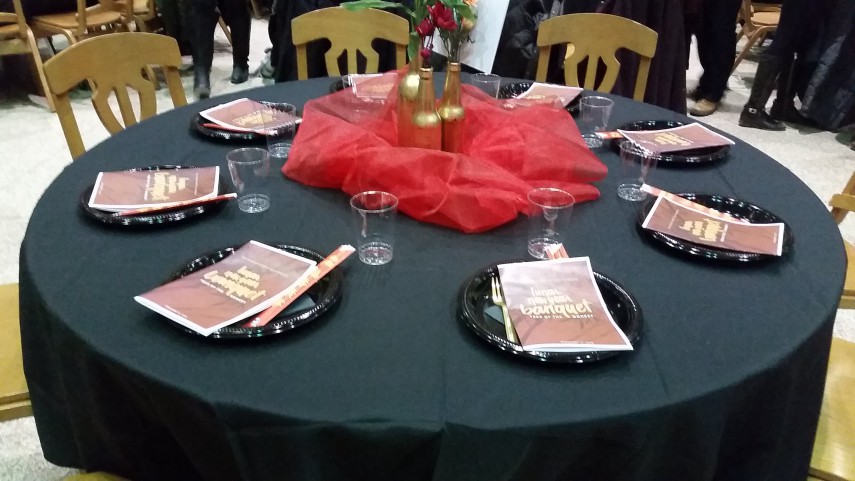 Food was catered from Jo Jo Taipei. Yum. Sorry for the blurry photos. 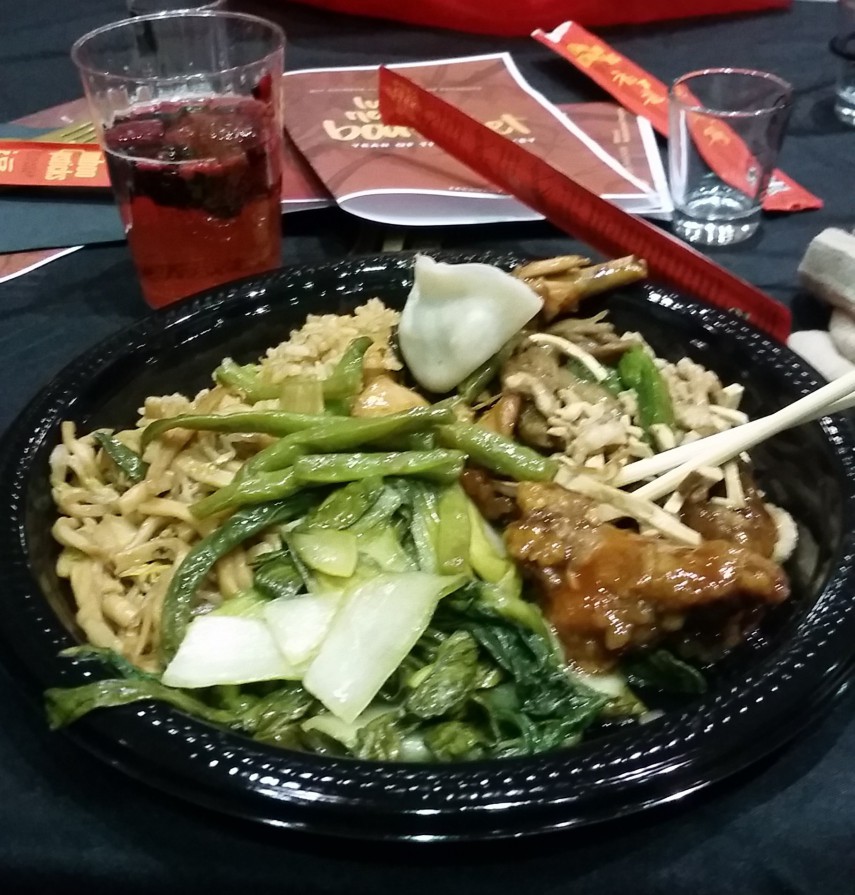 The acts for the night included performances by:

I tried to take some photos of the event with my phone, but there was pretty dim lighting and also my phone doesn’t focus appropriately the way I tell it to. Here are my meager efforts. Try to use your imagination to fill in the blurrier pixels. 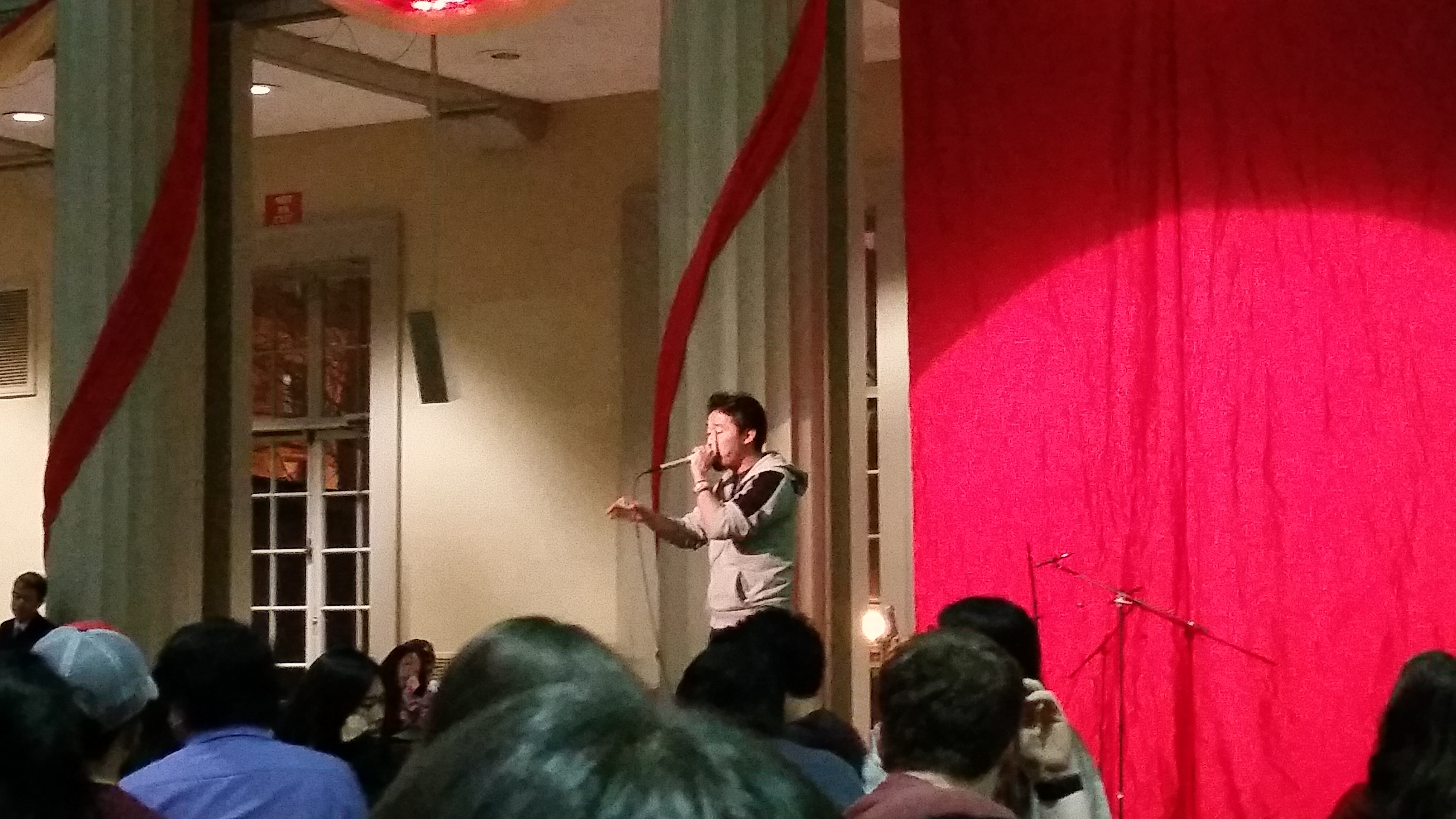 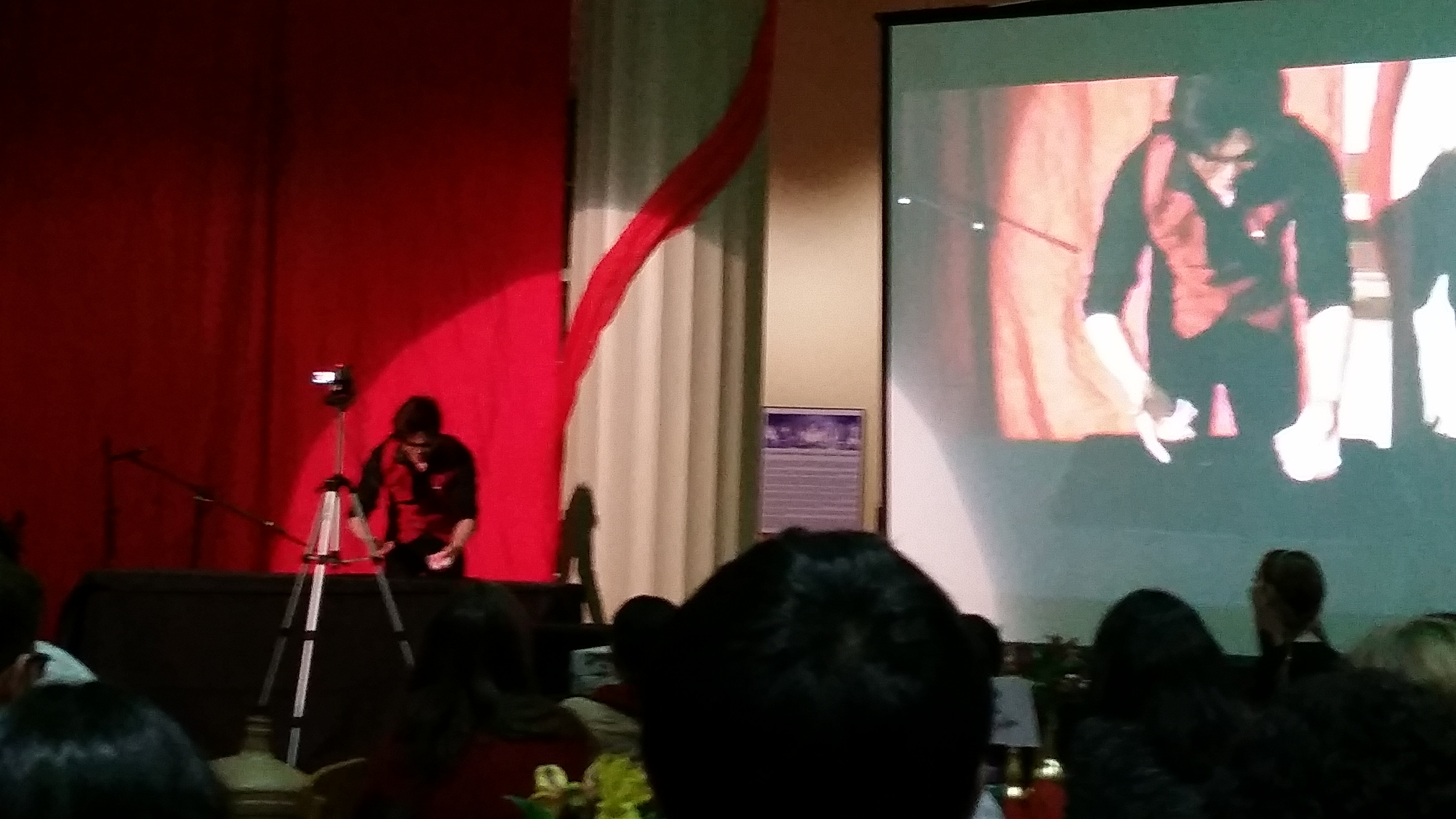 If you are interested in seeing some pretty mind-boggling magic, look up Shin Lim on YouTube and check out some of his videos. If you don’t know, Penn & Teller are two fairly famous and reputable magicians, so they created a show where magicians perform for them and if the duo cannot figure out how the magic is done, then the magician wins and has “fooled” Penn & Teller. Shing Lim successfully fooled them. I actually watched the YouTube clip at least 5 times before this weekend and it was still amazing live. The night was significantly improved by the fact that a couple of the tables at the event kept flipping out, cheering loudly, and standing up in disbelief and awe. It was highly amusing to watch them react to and interact with the performers. By the end of the night I was stuffed with food and extremely happy that I had decided to celebrate the Lunar New Year with CSC.

Just as the Lunar New Year marks the beginning of a new year, this Tuesday will mark the beginning of the third week of the spring semester. Classes are in full swing, though I’m just getting acclimated to how much time needs to be allocated to different psets and readings. 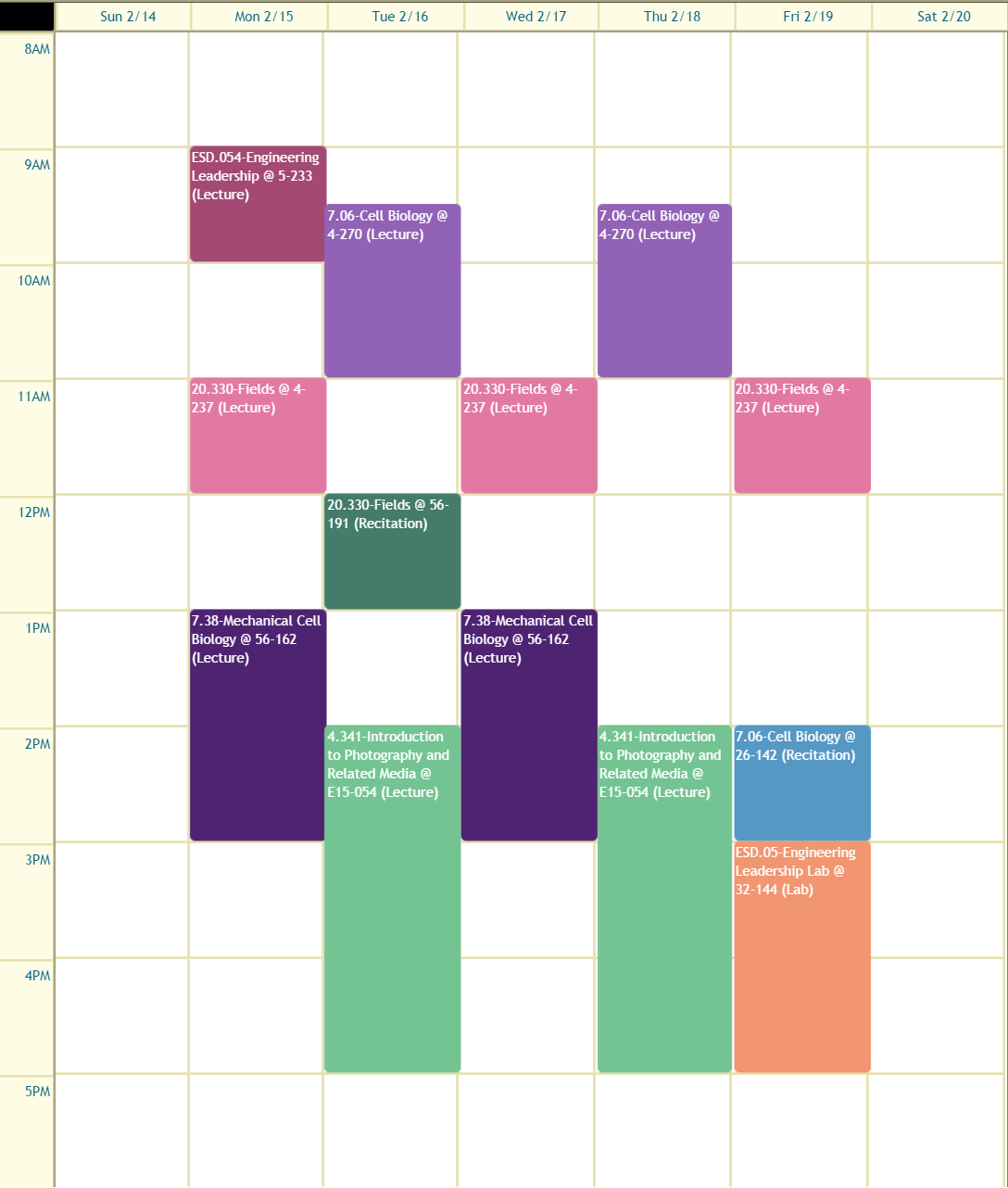 I’m fairly optimistic about this semester, based off of what I have experienced thus far. Here is a brief breakdown of the classes I’m taking:

20.330 [Fields, Forces, and Flow in Biological Systems]: I have to be honest. This is the course that I am most apprehensive about this semester in terms of difficulty of subject matter. So far we’ve covered a few interesting papers that have recently been published via which we’ve examined different applications and modeling approaches for diffusion of molecules. Later on in the term, we will also be discussing fluid flow in biological systems, as well as applications of electromagnetic fields. There seems to be a resurgence of differential equations in this class, which will certainly keep me on my mathematical toes.

7.06 [Cell Biology]: I ended up dropping this class in the fall, but it’s offered in both semesters (albeit with two different professors) so I’m taking it now. I actually took the first exam in the fall, so I’m fairly familiar with the content being covered now. We’ll see how it goes once we start going into the uncharted territory of cellular function. The class focuses on the topic of cell biology through the lens of experimentation, so the course requires us to become familiar with and comfortable applying different experimental methods. The first day of class, Professor Cheeseman brought in a tank of fluorescent fish, which I thought was a great way to start the semester off. All professors should bring in live animals to the first day of class.

7.38 [Mechanical Cell Biology]: This restricted elective is also taught by Professor Cheeseman, as well as another one of the 7.06 Cell Biology professors from the fall, Professor Martin. Unlike other classes, this one is a smaller class of around fifteen students (about half of which are graduate students) and though there is some lecture on Mondays, every Wednesday is dedicated to the discussion of two research papers that the professors have picked out on different biological phenomena related to forces in biology. Students present one paper, sort of like a journal club, and the other large project for the semester is that we will each be writing a mini-review on a current topic of research. We’ll get to go through a mock process, including having to write a cover letter to an imaginary editor pitching our ideas and getting peer-reviewed. Considering how many reviews I have read over the years and how helpful they are, I’m looking forward to learning more about the process and trying my hand at writing one as well.

4.341 [Introduction to Photography]: I am switching my concentration to CMS, which means this class is going towards fulfilling one of the four CMS courses that I will need to graduate. The class was actually surprisingly hard to get into, as are many CMS and HASS-A courses: apparently around 50 students registered, and there were only 15 slots to fill. Thankfully, as a junior with a CMS concentration, I managed to stay in the class and I am particularly eager to learn more about photography. We’ll not only get to use DSLRs and Photoshop, but we’ll also be learning our way around a darkroom and cameras that use film, plus additional methods of creating images with light. Three hours twice a week can be a little tiring, but it’s definitely worth it. Though we haven’t really started taking any images yet, we’ve spent some time discussing the medium of light and some basic terms for DSLR usage, as well as learning about different artists, like Vivian Maier who was a nanny/photographer extraordinaire.

The fact that my schedule is rather “holey” is not something that I am thrilled about. Hour long gaps are surprisingly short, since it takes time for you to settle down at a table and get all of your materials out and set-up. It makes finding time for UROPing difficult also, but I am continuing my UROP in the Griffith Lab from last semester, so I will find a way to make it work! Otherwise, I plan to just spend my free hours in the Hayden Library studying and getting as much work done as possible before I head back to my room. Turns out that even though I’m terribly inefficient working at my desk in Maseeh, there is something about the school’s library that focuses me and allows me to get more things done with far less distraction.