How non-seniors can occupy their time before and during graduation

Because my summer plans are about as fluid as one of those squishy water toys (anyone else remember these weird things?), I’ve been looking into a lot of part-time jobs. I’ll need something else to occupy time, earn a bit of money, and begin exploring some random careers.

I’m currently planning on taking a [email protected] class, Creating Digital Learning Materials for Biology, which hopefully will be a blend of my interests in science and media. But, in waiting for the summer session to start, I’ve found two short-term (and vaguely connected) jobs to fill these few weeks: helping out with Tech Reunions and stage managing a musical commissioned by the Class of 1954.

Tech Reunions are exactly what they sound like—MIT alumni gathering on campus to see old friends, reminisce about the good old days, see how the institute has changed, and go to snazzy events together.

The Alumni Association searches for current MIT students to help staff events and run registration—it’s only a couple of days and alums (especially the older folks) oftentimes like to talk to current students about what life at MIT is like nowadays.

For example, today I met the person who painted the sign over the door to the coffeehouse, back in the day when this space on the 3rd floor of the student center still served coffee. Apparently this particular alum was a manager of the coffeehouse at one point, but his successor wanted to rename the space “the java hut.” Needless to say, this didn’t sit well with this particular student so he painted the doorway in the middle of the night. He was happy to find out that his legacy, of sorts, lives on because students nowadays still refer to the empty room as the coffeehouse because of his efforts. 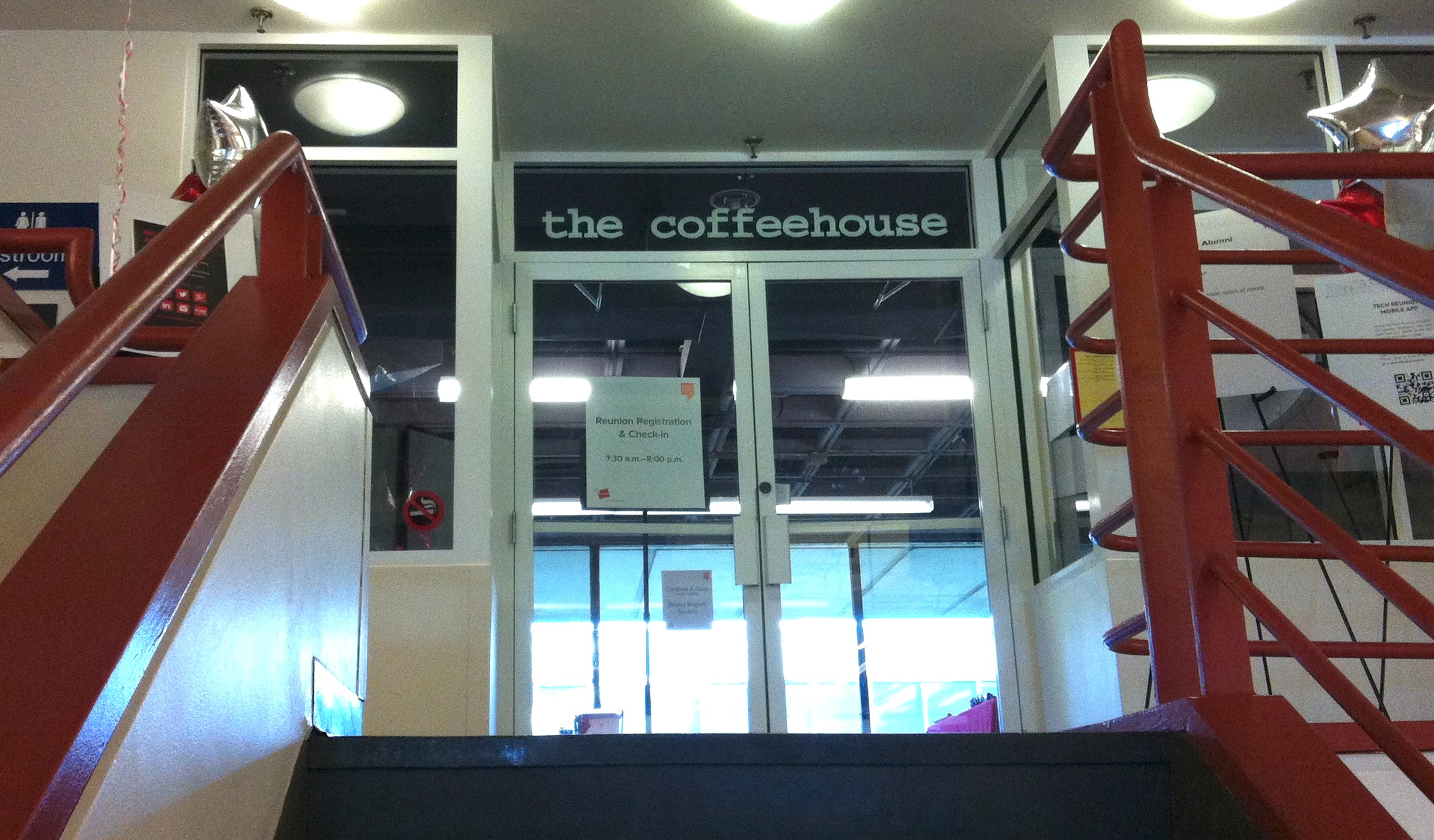 Here are a couple more pictures of the registration room and the souvenir corner, where I was stationed. Over the course of a single day, I met alums ranging from the class of 1944 to 2009, and handed out gifts from fleece blankets (’59) to huge brass rat paperweights (’89, for their 25th reunion) to caps (’64, for their 50th reunion where they get the iconic red jackets). 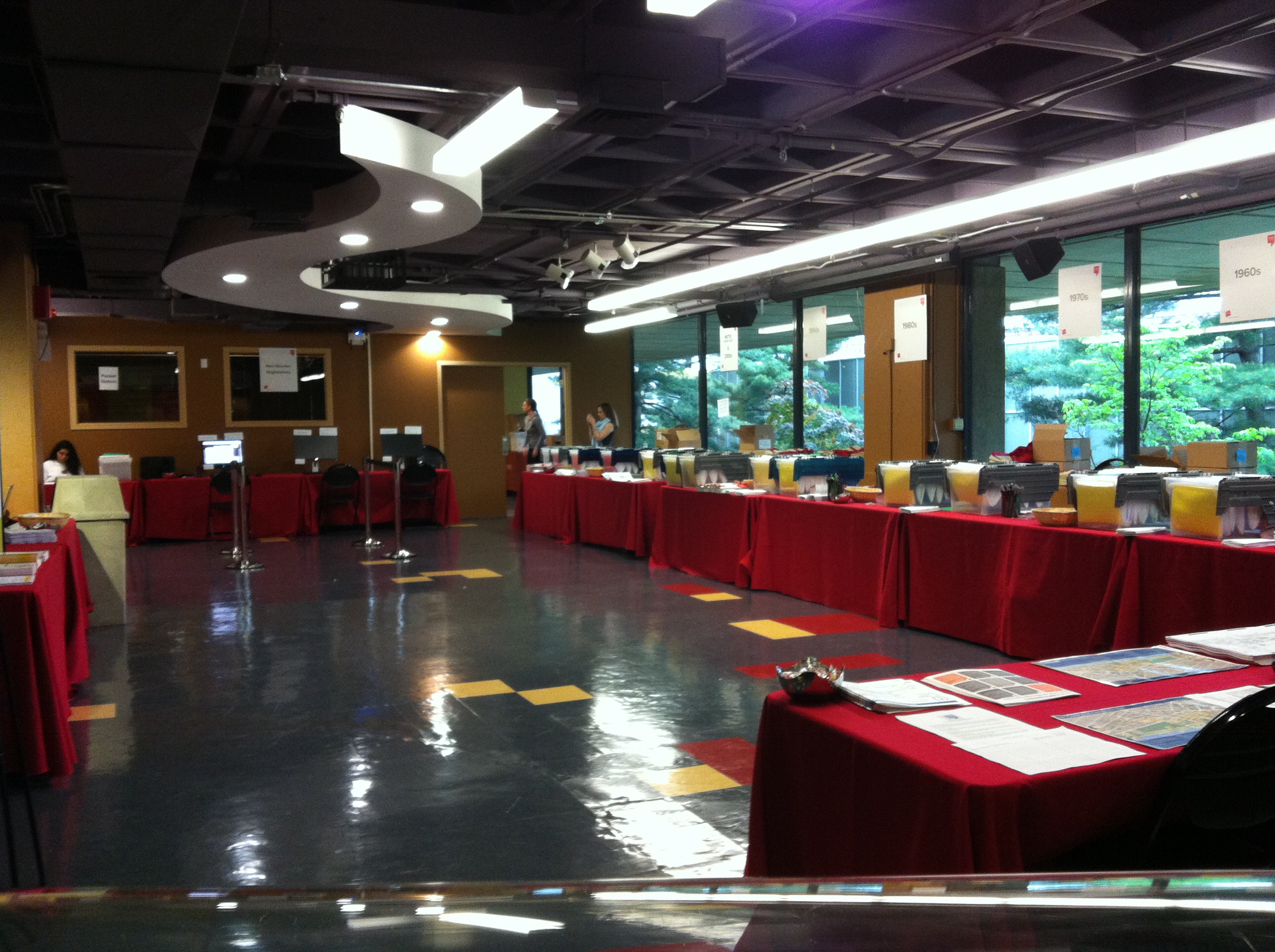 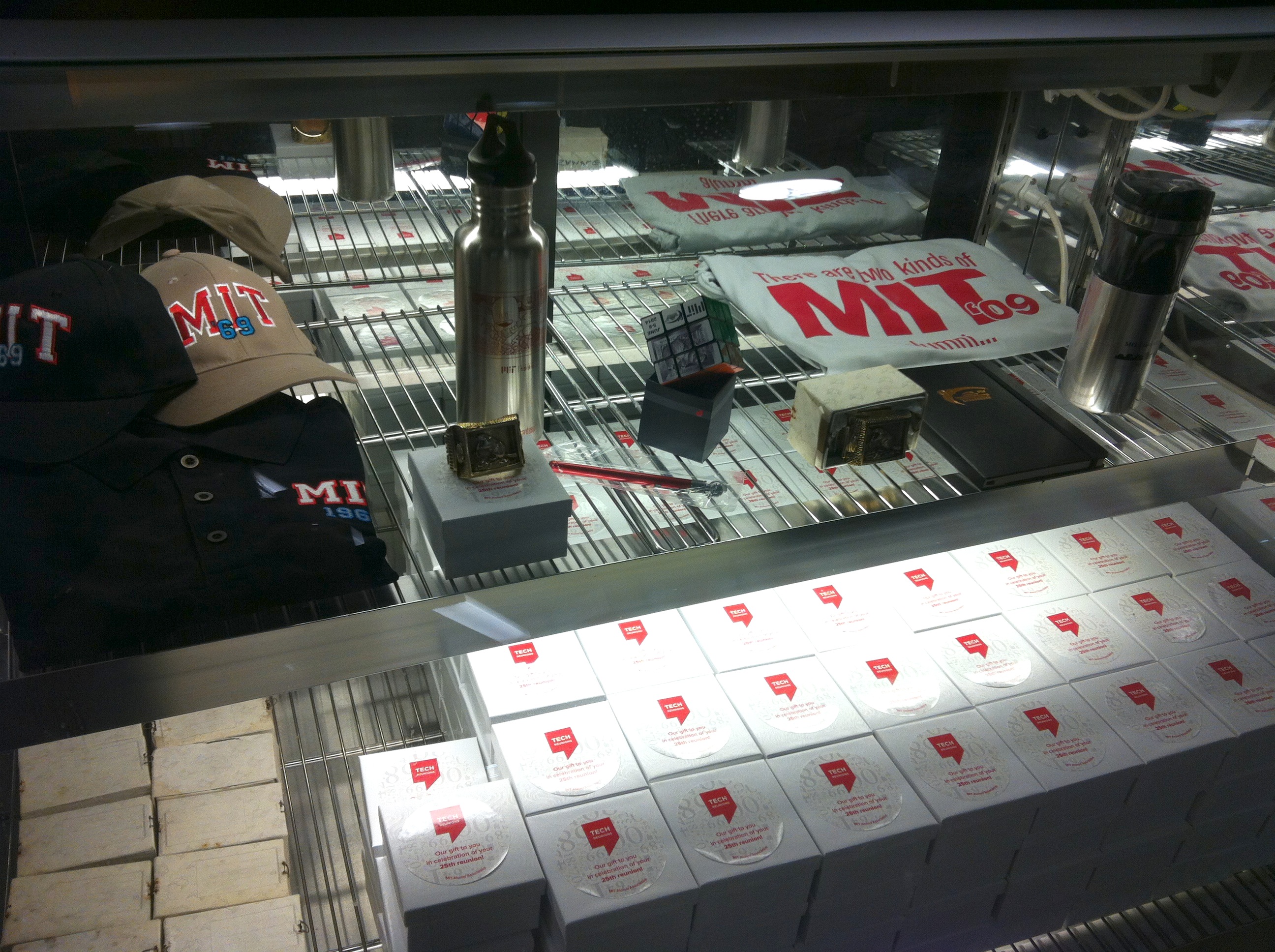 One of my favorite gifts to give out is a tire gauge (’99), which is apparently referencing the fact that Click and Clack of Car Talk (an NPR radio show about cars) spoke at their commencement. Most people are puzzled or apathetic toward this souvenir, but there was one guy who exclaimed some variation of “AWESOME!” with a fist pump upon receiving his. We complimented him on his enthusiasm and he gave an extra cheer for good measure.

After busy days of checking people in, giving them their freebies, wishing them a fun weekend, building towers out of business cards (pictured below), and watching my friend Rachel R. ’16 swat fat flies with ninja-like precision (total death count = 48), I headed straight to evening rehearsals for We’ll Get It Right. 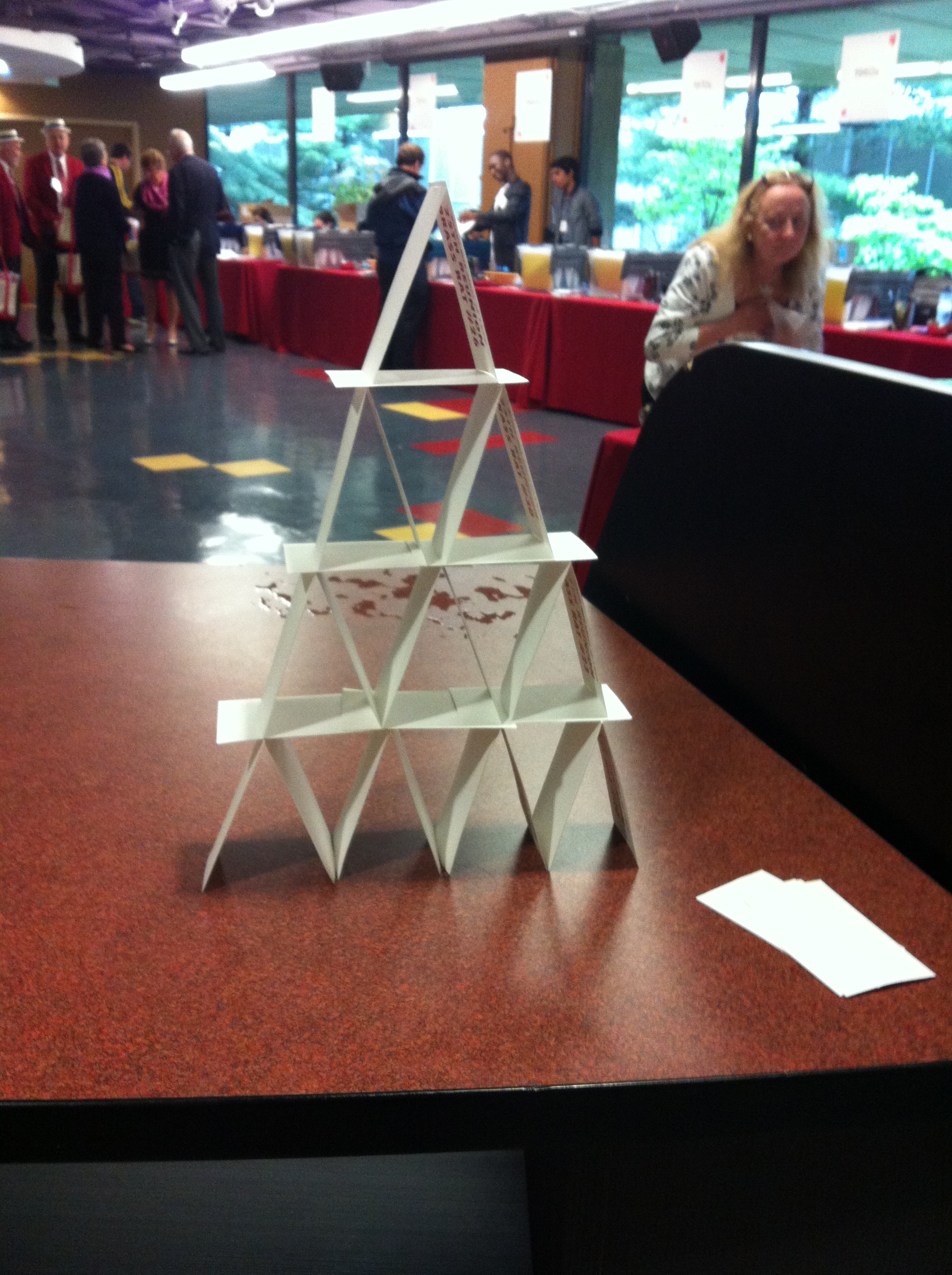 We’ll Get It Right is a musical about the Harvard vs. MIT rivalry that two representatives of the Class of 1954 commissioned for their 50th reunion. It was written, orchestrated, and directed by incredibly talented MIT Music and Theater Arts Faculty. (If you’re curious about the plot, here’s a more detailed synopsis and cast list).

I got involved in the process a couple weeks ago thanks to the technical Theater Arts faculty in Rinaldi, whom I’ve worked with several times on Dramashop student productions here.

After a short email exchange, an in-person meeting with the director, and some double-checking of schedules, I signed on as a stage manager for this quirky show. And it has been quite an experience putting together a full-length musical in only two weeks. It’s definitely the closest I’ve ever come to professional theater (and may ever come… but we’ll see what the future holds) because:

1) I got paid real life money. (Wut. I’ve been involved in theater since sophomore year of high school. All voluntary, all just experimenting and learning and not knowing what I’m doing. In fact, I usually end up losing money because getting reimbursed for small things is usually more hassle than it’s worth)
2) The actors are FANTASTIC (i.e. they’re basically professional i.e. I am so impressed with the quality of Musical Theater and Vocal Performance students/graduates from The Boston Conservatory as well as the willingness of some MIT students with only choral backgrounds who really embraced acting)
3) Orchestrations were being created and revised as we were rehearsing (it was a very crunched timeline and the orchestra was adapting so quickly to new scores and hundreds of single-note corrections which I, a fairly musically inept person, can’t even begin to comprehend much less keep track of on a day-to-day basis).

I don’t really have a better way of describing my experience other than including some pictures from my perspective as a stage manager (pardon the quality, phone pictures in a dark backstage area are not the best idea… oh well). There are props tables and mashed potato ice cream (movie theatre magic!) and blurry cast photos, oh my! 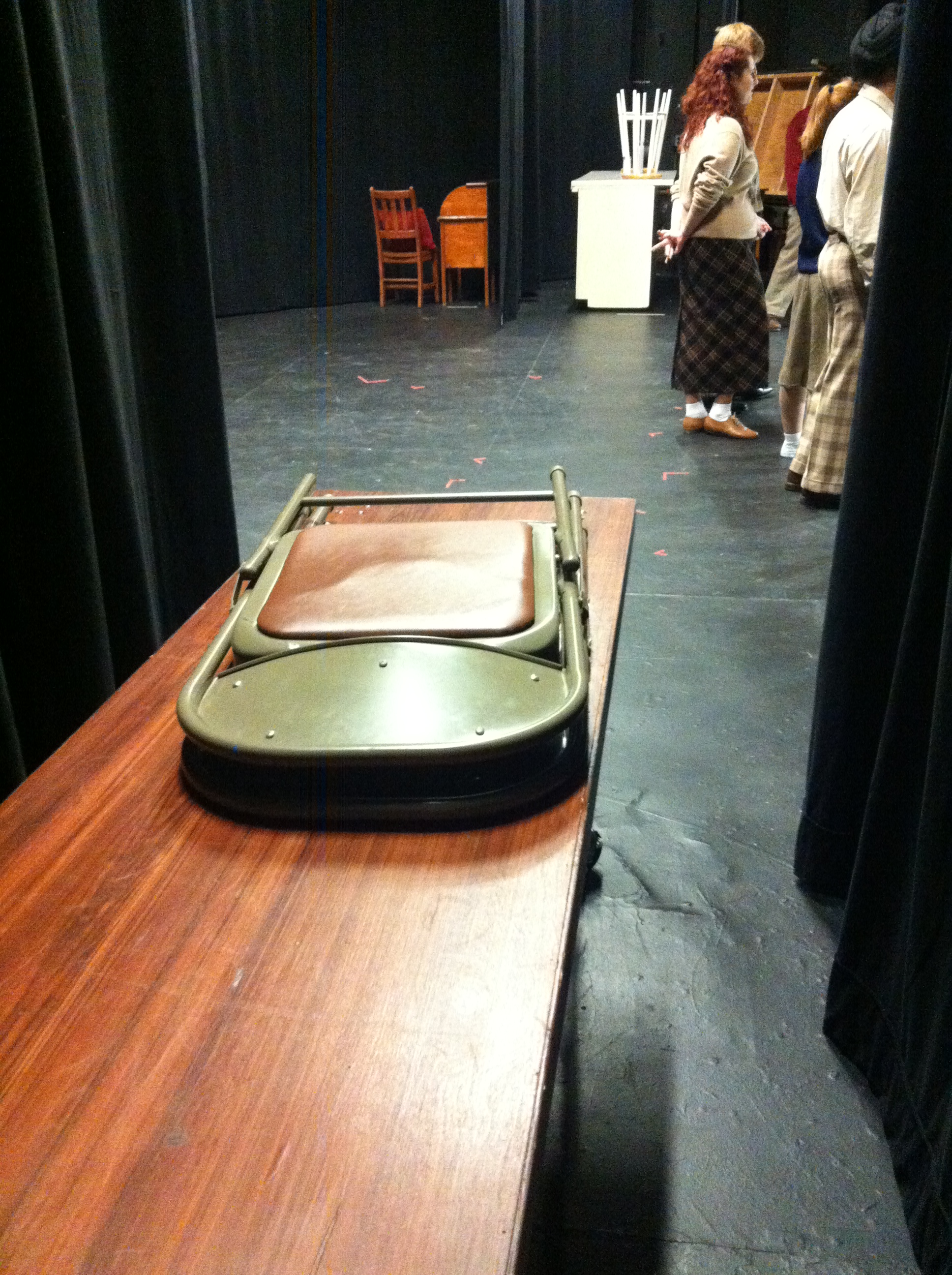 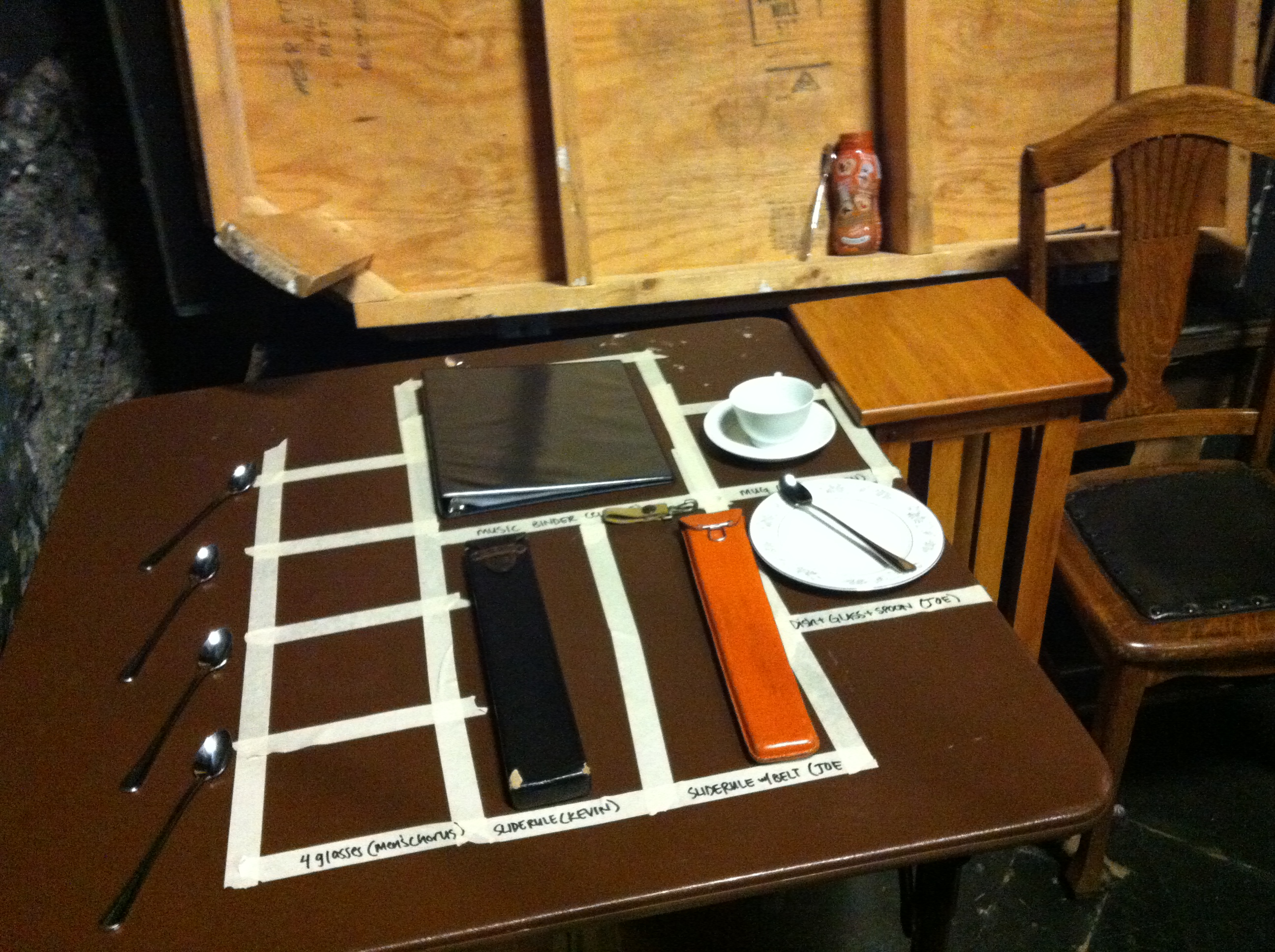 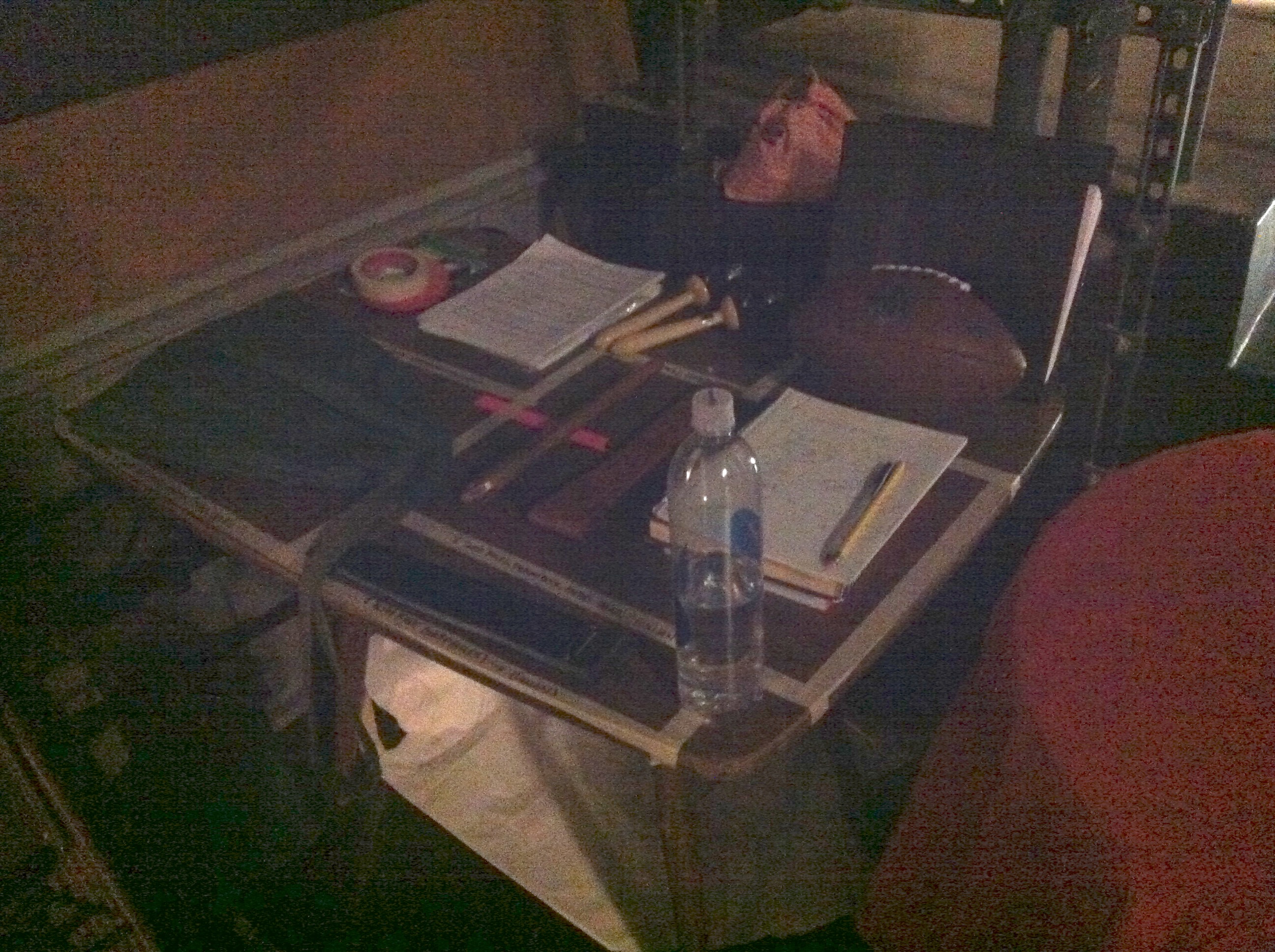 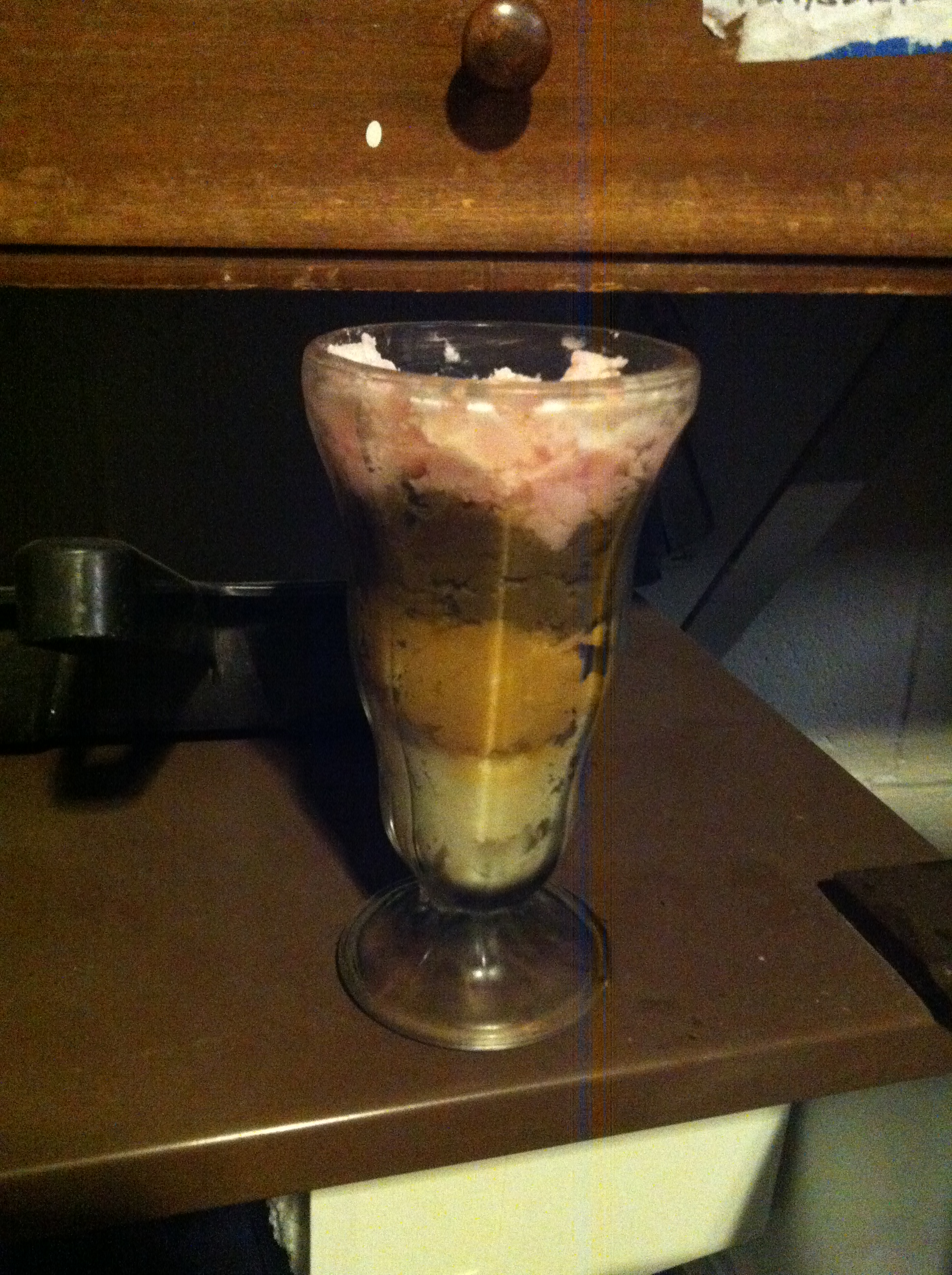 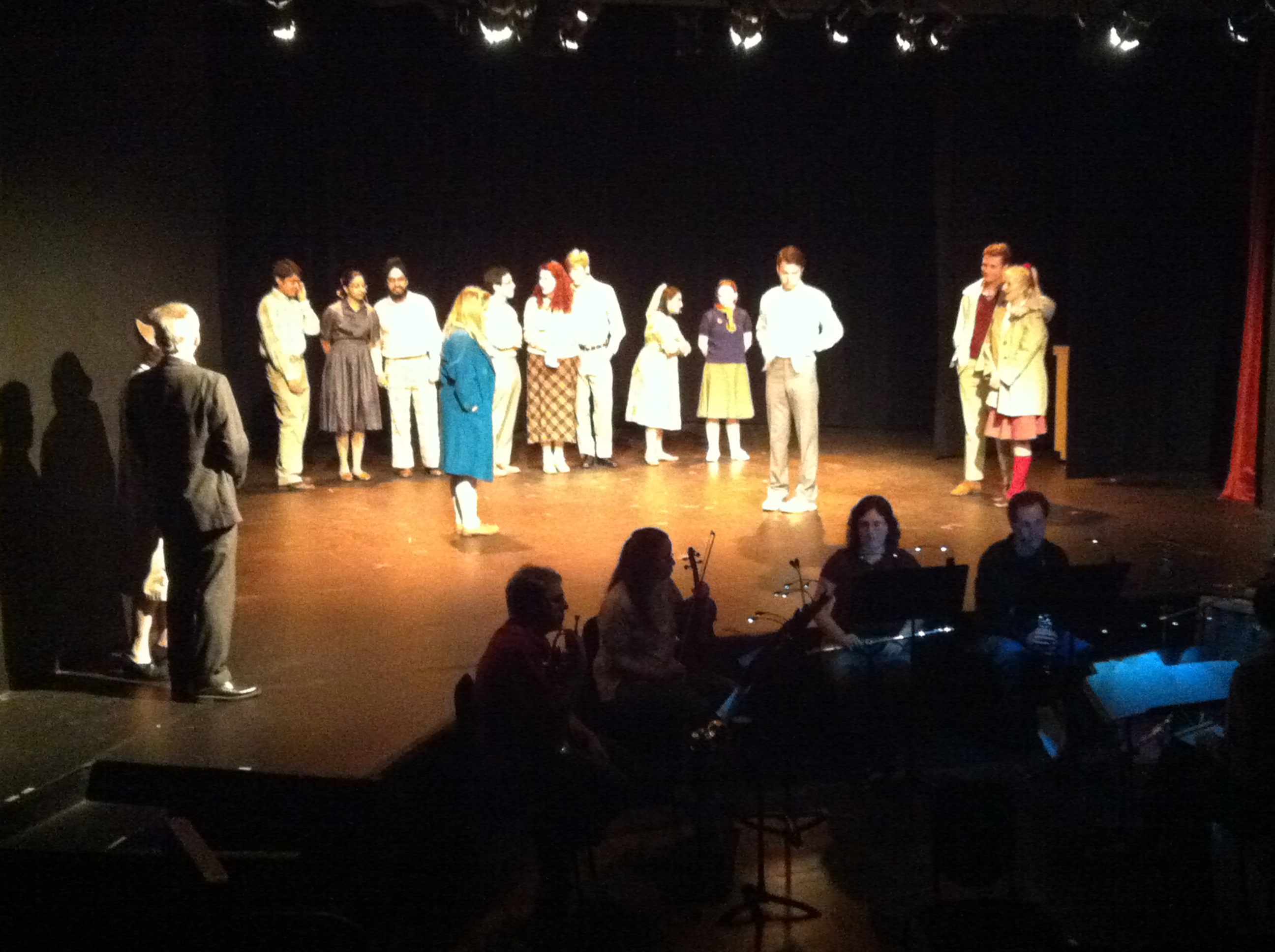 Aaand update with some better production stills, thanks to Jonathan Sachs: 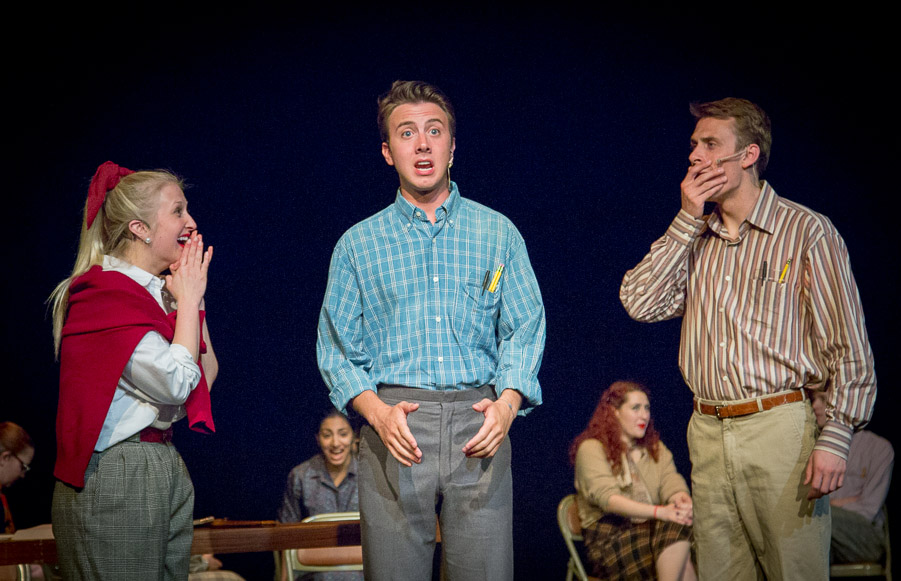 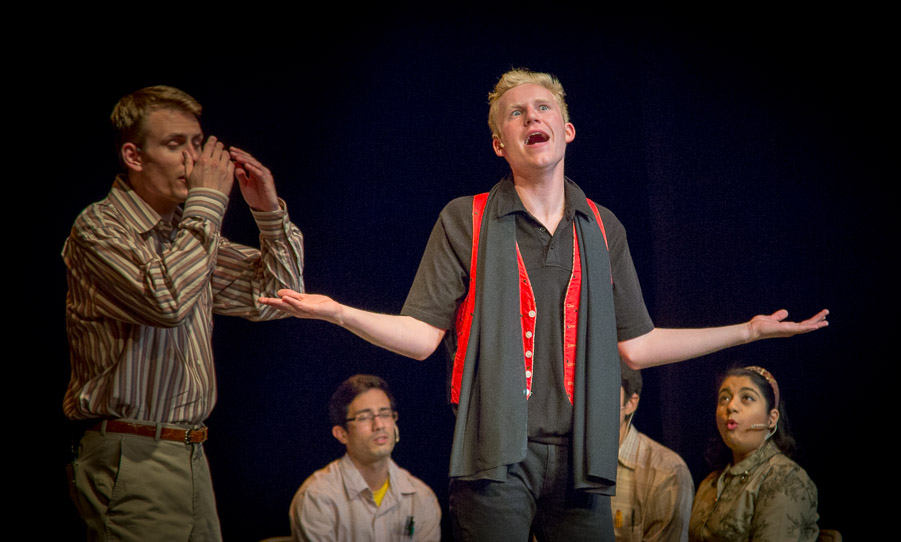 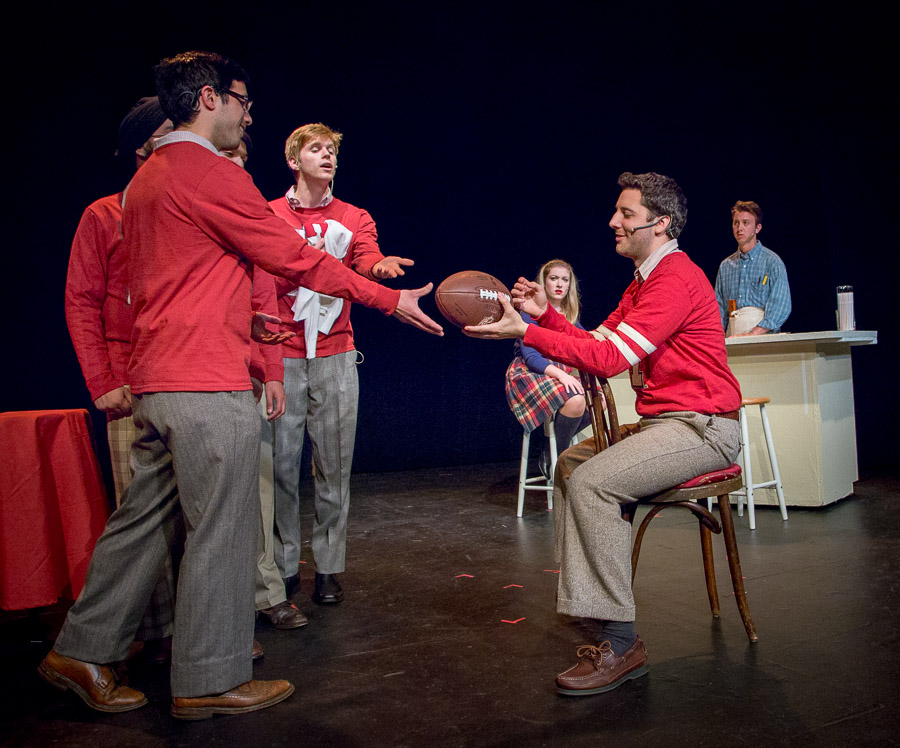 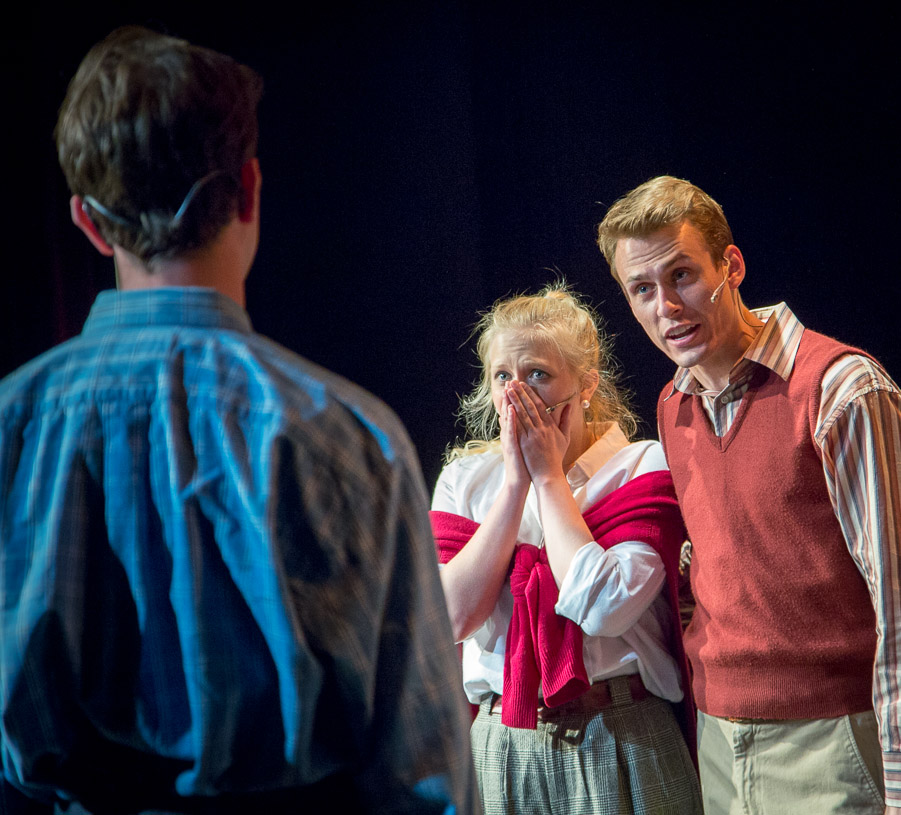 I’m so grateful that this summer has given me the opportunity to really immerse myself in theatre again (if only for a little while), as I tend to shy away from it as an extracurricular during the busy semester.

[Oh, also, here’s my public farewell to members of the class of 2014. Some of them have impacted my life in innumerable ways, and I’ll miss their presence on campus dearly. Much love, and I know all of you will be incredibly successful no matter what challenges you tackle <3]