When I was little, I went on what I proudly called “adventures”. I explored a jungle (my living room) with a cape (a fitted sheet), and ran “secret spy missions” with my sister (we put our ears to our parents’ bedroom door and tried to hear what they were saying). In second grade, I started “The Digging Club”: I led two friends to a patch of grass on the playground every day, and convinced them that if we kept digging, we would find treasure.

I haven’t eavesdropped on my parents in recent memory. Now, instead of using fitted sheets as capes, I buy fabric from the department store. And, last summer, I channeled my enthusiasm for imaginary jungles to enthusiasm for a very real internship – far away from home and everything familiar to me. Until then, my summers had been taken up by academic summer programs like CTY and SSP; I was ready to step away from textbooks and take my first steps into the world of “we don’t know why this happens yet” and “I wonder what would happen if…” – the world of scientific research.

I was no research rockstar. I hadn’t done any research, period. But I got an internship in the Cognitive Science and Applications department of Sandia National Labs. How? Talking. I hardly ever shut up about neuroscience; I read books by Oliver Sacks (who’s my hero and should be yours, too) then visited my Robotics mentor to share what I learned.

One day, right before a Robotics session, my mentor said “so, Anna, I know that you’re interested in neuroscience…” It turned out that he had a niece doing neuroscience research, who was looking for an assistant that summer. Life lesson: be openly enthusiastic about what gets you excited. People will notice.

So, I had my internship adventure…in theory. As I ran around the house celebrating, my mom asked me where I was planning to live. After all, Sandia is in Albuquerque, New Mexico – five thousand miles away from home.

Um. The street? A sleeping bag in the lab? I would be happy sleeping on a park bench.

My mom was not convinced. This wasn’t summer camp; there was no “student housing”, no one making sure I ate meals…I would be on my own, in a totally unfamiliar city, surrounded by complete strangers. She wasn’t keen. My internship hung in the balance.

It continued to hang, until two weeks (TWO!) before I was due to start work, when my mentor’s niece’s colleague offered to rent me a bedroom. Everything was set…again, in theory. I had no idea what I would find when I got off the plane.

It was scary. The morning I left home for Albuquerque was the same morning I left home for college: at the end of the summer, I would fly straight from Albuquerque to Boston with no intermediate return home. The day, I woke up to an empty house (my family had left for France), and sat in bed for a good ten minutes before getting up. This was it. I looked around my room – at the Manchester United poster on the wall, the stuffed animals at the foot of my bed, the Tweety Bird bedsheets – 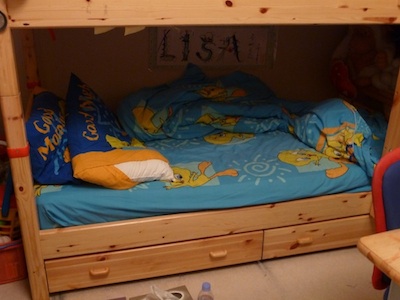 You know you wish you had these bedsheets.

– and was struck by the thought that I had no such mental image of what lay beyond this day.

I jumped up, threw on the clothing I had laid out the night before, and did my final packing with “Go The Distance” (from Hercules) on full volume. This was me for the summer (the hat being the most important part of the ensemble): 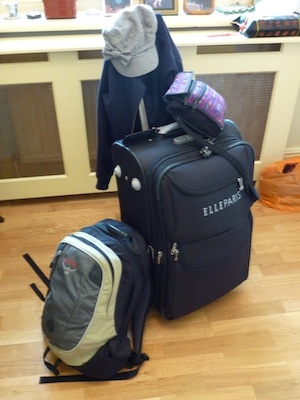 I slung my backpack over my shoulder, looked back a last time, then stepped out into the hall, shut the door, and pressed the button on the elevator. I sat on a low brick wall outside, waiting for the taxi, my imagination running wild with dreams of making a huge discovery at the lab and becoming super-famous on my first day there.

I didn’t. But I had an extraordinary, wild set of adventures that even my imagination could never have invented. More on those later.

At the end of the summer, I returned to MIT for pre-orientation and orientation and sorority recruitment (sorority recruitment: another manifestation of my “try everything!” attitude). One recruitment activity was to spend a few minutes talking to a stranger, then introduce her to the group using one adjective. My partner introduced me as “adventure-seeking.”  I had never thought to describe myself that way, but it felt right.