"Your calendar looks like a clown threw up on it!" -my friend Jordan

Here is what Google Calendar has to say about my first two months at MIT. 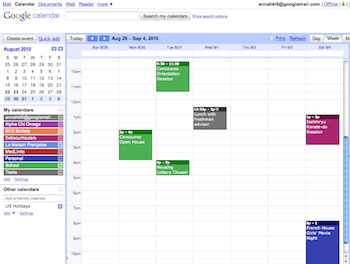 Nothing really going on yet. 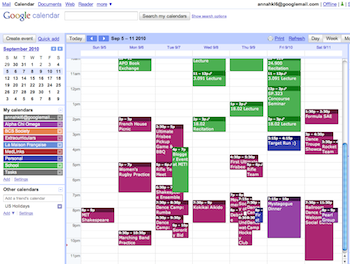 Week 3 onwards: School and beyond! Images not for the faint-hearted. 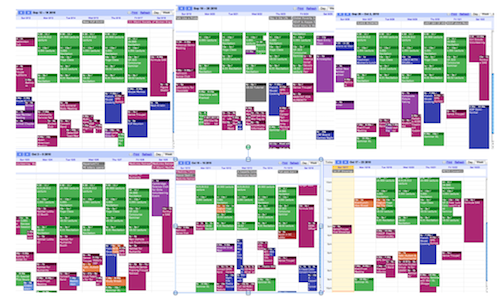 Spiraling out of control.

Now is probably an appropriate time to address the issues that Cam brought up in his post about being busy.

The toughest part has been finding a balance between activities I did in High School, and new ones. The fact that MIT has over 450 student groups, ranging from a Rubik’s Cube Club (no big surprise there) to Underwater Hockey (what?!) didn’t help with the decision-making process. In High School, I did a lot with FIRST Robotics, Community Service, and music, and I definitely didn’t want to stop doing any of those things once I got here. At the same time, it seemed like a shame to not try anything new.

So, I had to adopt some kind of strategy. It’s fairly simple. It’s called the “try everything” strategy. Pass/No Record is a great time to do this – to adopt the “I want to be busy, but not solely with academics” attitude. The Activities Fair was a blur: I signed my name on so many mailing lists that I honestly forgot what I had signed up for until I received e-mails saying “thank you for joining!”

When the dust finally began to settle, the first thing I did was sit down with my calendar and plug everything in, to figure out where decisions would have to be made, given the axiom “Anna is physically incapable of being in more than one place at one time”, or “Anna does not own a Time Turner*”. I ended up with evenings that looked like this –

– which were clear violations of the axiom. So, decisions had to be made. I felt that I could only make those decisions through experience, and so ended up running from building to buliding (I got to know MIT really well), from meeting to meeting, trying to figure out what I enjoyed the most – what I cared the most about. As time went on, I shaved bits and pieces off my schedule, continually sifting, until I was left with something that worked logistically, and still left me with a few hours in the day to get work done. I found that the best test of whether I really enjoyed something – and didn’t just feel that I “should” do it – was how I felt on days (like yesterday) when I was particularly exhausted. If I felt like I was dragging myself there, then it was probably something to put lower on my priority list. On the other hand, I found plenty of activities that I was excited about going to, no matter what my current state of mind: activities that cheered me up on a bad day. I also tried to stay away from activities that were too time-consuming – sports, for example – because I wanted to use this semester to do a large variety of things, rather than commit to one super-intensive activity right off the bat.

I’ve eaten dinner with professors, and attended a talk about the Large Hadron Collider by a scientist who works there. On Fridays, I spend an hour in the T-Club Lounge, learning a Jazz/Contemporary dance piece choreographed by an MIT student (Hannah ’13!), and am currently in the process of organizing events for Brain Tumor Awareness Week with MIT BrainTrust. I’m learning how to reserve a room, how to publicize, and basically how to run an event from start to finish, from older students who have been through the process a zillion times before, and I can’t imagine that I would have been able to do this if I’d been more reserved about hitting the ground running here as far as extracurriculars go. On Thursdays, my four-person team cooks dinner for the 27 people in French House. Before this semester, the extent of my cooking skills was Instant Noodles, or an omelette if I was feeling adventurous, and my dance experience was limited to some ballet between the ages of four and nine.

Next weekend, I’m going to a Students for the Exploration and Development of Space up in Illinois.

I’ve randomly attended some Brain and Cog Sci talks (one about autism, another about cooperation).

It’s impossible to be bored here. Absolutely impossible. You would have to try really, really hard to end up with “nothing to do”. At any given instant, there are mind-blowing things going on all over the Institvte, and I intend to take full advantage of that.

Unfortunately, this means that prioritizing is necessary; there are a zillion things I would have loved to take part in this semester that I was simply not physically capable of doing. But there are only so many hours in the day. In the end, decisions have to be made, and I think that the healthiest attitude (and the one that keeps super indecisive people like me from just giving up entirely) is that it’s up to us whether our decision is the “right” one. Often, I have trouble making decisions because I’m worried that I’ll make the “wrong” one and I’ll miss out on some life-changing opportunity. I think, however, that a decision is only the “wrong” one if I don’t take full advantage of it.

I think. That attitude is what keeps me going, anyway.

And the hope that one day I can get my hands on a time turner*.

*If you don’t know what this is, go read some Harry Potter. Or click here.