On Greek history, and this strange end-of-semester sprint  by Amber V. '24

tl;dr nerding out over a final essay

I’ve just taken the luxury of lavishing two full days on an essay about Alexander the Great. It could have taken far less time, but it was really fun to dive into; and I’m a frosh on PNR,⁠01 pass/no record, ie I can afford to take the time away from studying for my physics final. so why not?

The essay was for 21H.130, History of Ancient Greece, which is my CI-H⁠02 CI-H/CI-M classes have a focus on writing and speaking, and we've got to take one each year. class. I’ve really enjoyed it. I never got to take Greek and Roman history in high school, though I think I prefer taking it now, when I’m more aware of the world. Ancient Greece is the fodder for many a modern narrative, so it was really interesting to learn not only about the modes of thought and political structures then, but also see how they’ve been used since: how industrial Britain and Germany cast Mycenae⁠03 a pre-Homeric civilization in Greece, before city-states, which was discovered by a German guy in the 1800s. as the original colonizer, how both some communists and some US Marines take inspiration from Sparta.⁠04 Spartan warriors in the ancient Greek world were seen as super badass, having trained in military schools since age seven. Their society had no currency, just barter. Plus, it’s great for writing. There are so many obscure facts and little stories I can make allusions to.

We got the essay prompt before Thanksgiving: who, or what, killed Alexander the Great? Pfft, I said, a mosquito, everyone knows that. They wrote it in this picture book I read in third grade.

Turns out that ain’t the case. The man got sick after or before drinking with his buddy Medius (depends on which historian you ask), and then his fever worsened. Paralysis set in. Alexander died; the royal astronomers recorded it in their star chart, then remarked that clouds covered the sky. And all our lasting historians mention rumors that the man was poisoned.

I was eager to start writing, though it took a minute to get to.

I spent Thanksgiving break catching up on internship work, and starting a new novel. Then the first week back hit me like a train — I had a non-MIT writing project I turned in on Monday, a final project for advisory on Tuesday, short story revisions for my writing class to do Wednesday, and on Thursday I had to reckon with the psets I’d been ignoring all week. One of the problems was to prove E = mc2. We got hints, it was an awesome problem, but that pset took forever.

And, come Saturday, this essay.

I don’t know if it’s zoom, or seminar classes, or non-STEM classes at MIT, but it feels like I could fly through this class doing 15% of the required work. I do the weekly readings, keep up in the textbook, so that unread chapters didn’t pile up. Even so, I keep thinking that I can do this now, sure. I’m a freshman, off-campus, with no work-life balance. But if I took this class a year from now, alongside harder classes and more pressing responsibilities, would I have the self-discipline to still put in the work?

I hope so. I really do. I’m taking classes like this to learn, of course, and I don’t want to cheat myself.

Anyway, on Saturday, I woke up late and read the textbook. I went running. I forced myself to take a seat in the mid-afternoon, when it’s only three and yet evening is approaching. I read the sources my prof had sent us, and I was just thinking, “Who cares how this emperor died? It’s not like we’ll ever know.” 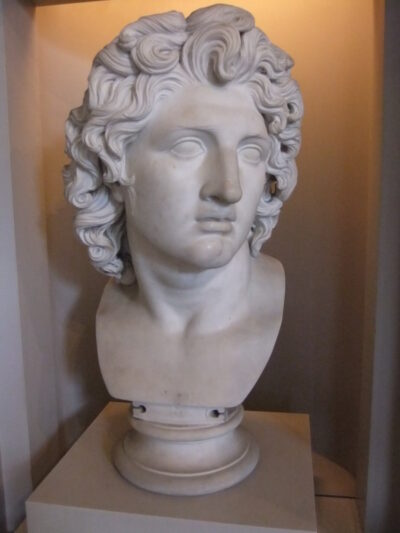 We do not know if this is what he really looked like.

We won’t, of course. But as the night wore on, as I took in the different symptoms for proposed diseases, all of them an imperfect match… I began getting really involved. I paced the room after full dark, trying to reconcile the parts of my mind: one was sure there had been no poisoning, that the mere thought of it was historians being dramatic. And the other part of me thought of this emperor, who’d marched his soldiers eastward until they mutinied and demanded to go home, who’d then brought them through a desert just to prove he could, who a lot of people hated, just happening to die by mosquito bite?

I spent all of Sunday crafting an essay about how Alexander was most likely poisoned.

And it’s funny, because it’s not really important, it’s not like knowing this will matter to me for the rest of my life. But on that day, and that night, I was reading all these things about Alexander, and Hephaestion, his lover, who I think may have been poisoned too. I was just having a good time — Greek history is excellent fodder for queer theory.⁠05 for example, extramarital homosexual relationships were considered normal in ancient Greek times, but not in the eras that many works were translated. So some textbooks will translate a word to mean 'friends,' or 'most intimate friends,' while other textbooks use words like 'lover.' I felt awash in the conflicting symptoms and fragments of evidence, rumors thrown back and forth for centuries, and I smoothed it into something possible, maybe even plausible. And there was a part of me that really wanted to know who killed Alexander the Great.

Sometime past midnight, my sentences stopped making sense, so I called it a day. Out the window, a delivery truck was parked outside the bakery across the street. A boy unloaded crates from it. His breath must have fogged in the cold.

I thought of my bookshelf at home, with this five-hundred-page book of raunchy Greek myths, and how I could read it with a bit more context. I thought of Madeleine Miller’s Song of Achilles, which is about Achilles and Patroclus, I think, from the Iliad. I wanted in that moment to read Miller, and the Iliad, and all of Plutarch’s witty histories. There’s just so much, you see, and I could read it and drink it up and know it deeply.

I dunno. I was just happy to be excited about all this. Often I don’t have time to care this much, and I forget how good it feels.

In this fit of glory, I hopped onto tiktok. I usually binge it for a bit and then delete it from my phone for weeks on end, and usually ‘binge’ means an hour or so, but this time, ah, I looked up a bit later and could see the paleness in the sky that precedes dawn. My first technical all-nighter of the semester, and not because I stayed up late with friends, or hammered out a pset, or even read a book, alas. I went to bed, and around 7 the sun rose, directly on my face. Rather than stand up to close the blinds, I moved to the floor and slept til eleven.

Today feels somewhat unreal, probably because I did my sleep cycle dirty. I finished the essay and just have to polish it.

These last few days are strange. I feel like I’m crashing, even though finals aren’t over. They haven’t even begun. I’ve taken to running for an hour and then being totally immobile for the rest of the day, which leaves my body confused. This crashing might not be the good kind, the kind that leaves you eager to jump back into everything.

But maybe it can be. Maybe I’ll give myself time to read all those pretentious Greek books, because they’ll make me happy. Spend a little time, learn Greece a bit more deeply, because it is worth learning. Then rush into IAP to work on so very many cool exciting things.

And anyway we’re almost here. One week, two, and then we’re cut loose.