In this past semester, the definition of “home” changed a lot for me. Today, I hung out with some friends from high school. We all noticed that we mellowed a lot over the course of college.

“I like this Cami,” my friend had said earlier tonight. “You seem happier.”

I am. Words cannot describe how much happier I’ve been since I’ve come to college. I learned so much about myself, the world around me, and others throughout those past four months.

Coming home for the first time after this whirlwind of a semester has left me somewhat stupefied, like a rollercoaster suddenly breaking down in the middle of the loopty loop or like my legs just seized up during my sprint. I’ve spent this past semester doing so much and learning so much…only to return to a house that does not feel like a home. Perhaps it’s a bit of an overexaggeration, but it seems that this is a commonly shared feeling among a lot of the students here at MIT, and maybe even just students in general. 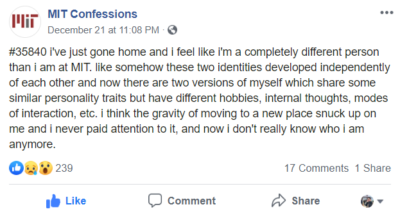 This was a confession posted recently on the page that really resonated with me. I felt it a little bit when I went home during Thanksgiving, but it truly hit me like a truck the moment I came back to California for winter break.

It’s strange to think that I’ve come so far, that a personality could change so much in the time that I’ve been here at MIT. And change, of course, isn’t bad. I think I’ve made a lot of steps in the right direction and I’m really proud of where I am.

And I’ve tried to type this sentence out again and again but the words can’t come out right and I don’t know how else to describe it so please bear with me.

And being back home makes me feel like I have to quiet all of that again.

I spent a lot of my high school life trying to act tough — a don’t fuck with me or I fuck with you kind of attitude. Don’t trust anyone ’cause they’ll just backstab you mentality. Everyone is fake and they’re against you.

But, in reality, I’m incredibly soft. I gush about my friends constantly, have the utmost admiration for everything they are and everything they will be. I’m amazed at nearly every single person at MIT, but there are moments where I go back into that weird, defensive shell. I’ll make offhanded comments about people because I don’t trust them, not because they did something, but because I think they’ll do something.

It’s strange having to reprogram all of that, and in these past four months, I think I’ve made progress in terms of learning to trust people and see the good in people and just allow myself to be as affectionate and as soft as I’ve always wanted to be. But I’m afraid that being back home will ruin all that for me, that I’ll revert into the person that I was rather than the person I am now and the person I want to be.

I was talking to the 24s and some of them voiced some concerns that there wouldn’t be a place for them at MIT. And while I know it’s virtually impossible that MIT is the right fit for everyone, there was something so undeniable at MIT, something that just screamed home.

It wasn’t immediate, no, not at all. And it doesn’t have to be. For some people it takes minutes, others it takes days, maybe even weeks. I still remember the moment it hit me. I was sitting at my desk in my room and Emma, Aidan, and Raymond were sat on my floor, eating Anna’s they had bought earlier in the night. And we were talking about how we haven’t seen each other in so long and that it was absolutely insane that we still kept in contact even after CPW. We talked and talked and talked and I think Mariia might have come in at one point and she felt kind of awkward cause she didn’t really know these people and hell, I didn’t really know her. But there was something very good about this moment. This moment seemed to tell me that these are the people that will keep me safe and help me grow and that there will be more people like this here. And I knew I was where I belonged and I knew I could say and do and be whatever I wanted.

Since I’ve been back, I’ve been telling my mom I want to go “home” to which she responds “But you are.” And I shake my head and smile a bit warily because I know she probably won’t take this well, but I simply repeat again “No, I want to go home.”

And she knows what I mean.

I love my childhood home. I’ve grown up in the same house for the past seventeen years, how could I not? There are an incredible amount of memories in this house stored in every floorboard, in every magnet on the fridge, in every stupid little souvenir. Hell, my bookshelf is full of items that aren’t even usable anymore like broken flashlights and cracked Easter egg shells, but I still keep them anyway because I like the memories tied to them.

It isn’t that the house doesn’t feel like home anymore, it’s that California doesn’t feel like home. I feel like, for the time being, I’ve exhausted all that California can offer me right now. I don’t know how to explain this without making a stupid video game metaphor so I’m going to make the stupid video game metaphor. California feels like the first world of many on this long, long journey. I’ve completed every main quest, done as many sidequests as I feel like doing, and now, I really just want to go to Cambridge, the next level. There, there’s a whole new world waiting for me that I just can’t wait to explore.

Perhaps one day California will feel like home again. Maybe in the future it’ll release some DLC and then I’ll have new things to learn and gain from it. Don’t get me wrong, it’s nice to visit. I love seeing my high school friends again and my teachers and eating some actual good fucking food. But at the same time, MIT has stolen my heart for these next four to five years and I will continue to quest on with my trusty squadron of seven great knights and together we will tackle whatever adventures MIT throws at us. 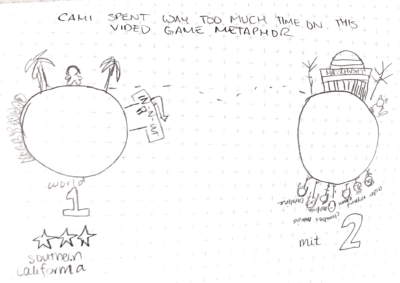 Metaphors aside, MIT has very quickly redefined what home is to me in such a short amount of time. When I think of home, I no longer envision sandy beaches and traffic jams and private school uniforms. Instead, I see late nights in Loop lounge, Stud5 study sessions, Random basement shenanigans, and my seven best friends standing by my side.

MIT is home. And I know I said it before, but I think it really, really is now.