being a prospective CS major with little programming experience 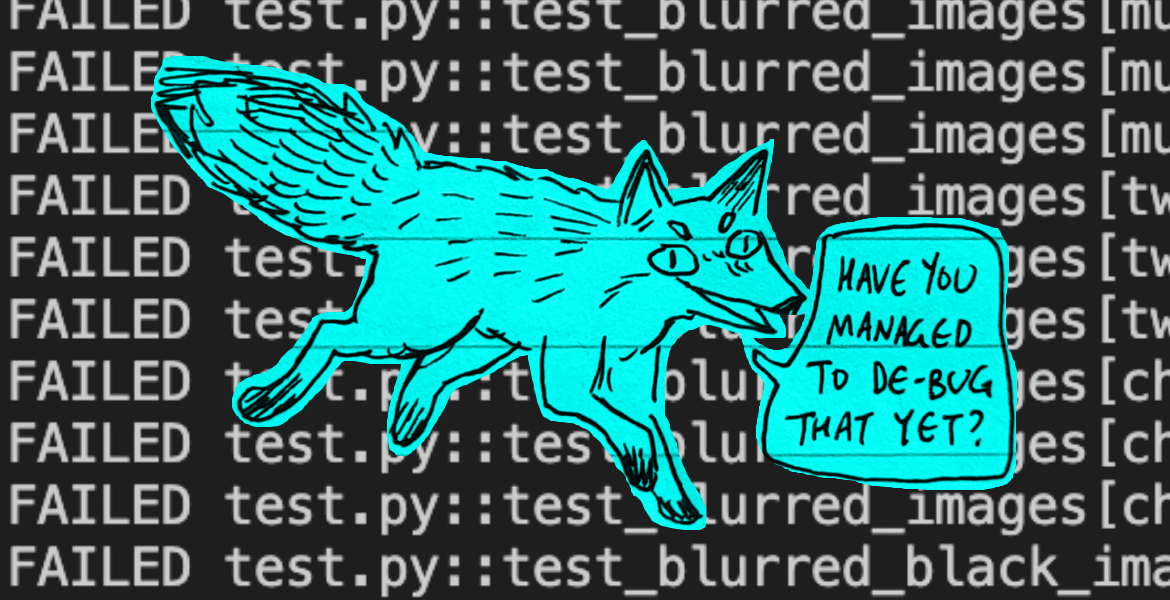 the fox will make sense later

I want to major in computer science. I have plenty of experience in other fields like biomedical engineering and robotics because I was also interested in those things. At one point, I realized that I’d much rather prefer working with software over organic material or hardware, but by that time I had already finished high school. CS can be hard for beginners, more so at MIT, so I’m at an area where I feel like a lot of my STEM background amounted to nothing, since it holds little relevance to my prospective major.

I’ve wanted to go into computer science since seventh grade, after I watched like one episode of  Mr. Robot.⁠01 I also had a brief phase where I wanted to go into cybersecurity but I went on this trip to the NSA and the tour guide I had was really uptight and that kind of killed the vibe Neuroscience and psychology were also up there in my interests but I didn’t want to work with organic beings (alive or dead), so I opted for an interest in artificial intelligence instead. I went to a coding camp over the summer that I really liked, where I made this rudimentary text-based adventure game and also played a ton of Team Fortress 2.

As much I hate talking like this is absolute, there was just something about coding that clicked with me. IDK how to describe it, other than that you can put it in a Venn Diagram with my other favorite activities—drawing and playing Minecraft—and label the overlap in the center: “activities where you create things.” I don’t know. There’s just something about it.

Meanwhile, I was exploring a different field, which was biomedical engineering. I don’t know how this happened, but I think it started from Science Olympiad tryouts in seventh grade.

The teachers had us take these tests to see who they should put on the team, and one of the tests was themed Anatomy & Physiology. There was this guy I had a crush on who was also trying out, so obviously I had to master everything I could in Anatomy & Physiology. I ended up liking it and specialized in the Anatomy & Physiology event from seventh to eleventh grade before I finally “retired” from it in my senior year of high school.

Additionally, the high school I went to had proportionately much more resources for biology and chemistry among the sciences. I have multiple speculations why it’s like this:

AP Computer Science was offered as an elective. Every class except freshmen submitted a ranked list of electives to submit into a lottery system, where an algorithm would pick one of the choices for their schedule. It refused to give me AP Computer Science for all three years.

I didn’t care that much. I liked to study biology and I could somewhat tolerate chemistry, so I’ve drifted from my initial interest in artificial intelligence and computer science into biomedical engineering. I spent my summers getting involved in programs geared towards students who were interested in pre-med, bio, biochem, or BME.

And I enjoyed these programs! There were two in particular:

Despite the positive experiences, I came to the difficult conclusion that I couldn’t see myself going down the BME path in the future. As much as I like learning the content, I don’t think I’ll fit into the field, mainly for the reason that I stated earlier in this post: I’d much rather work with artificial things than organic things. 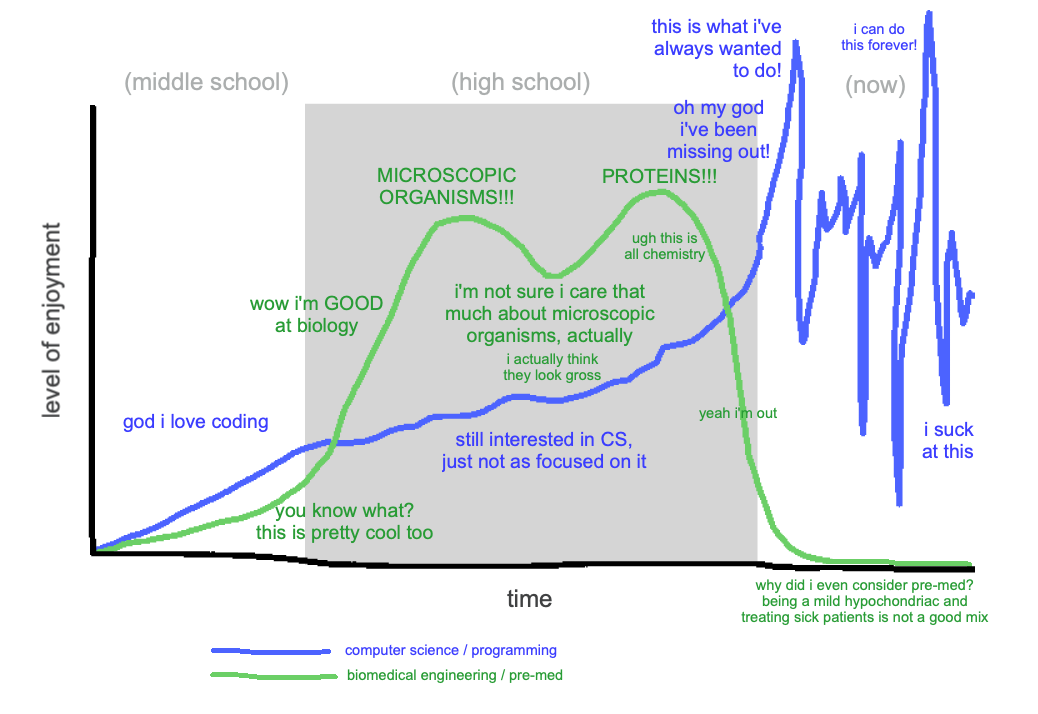 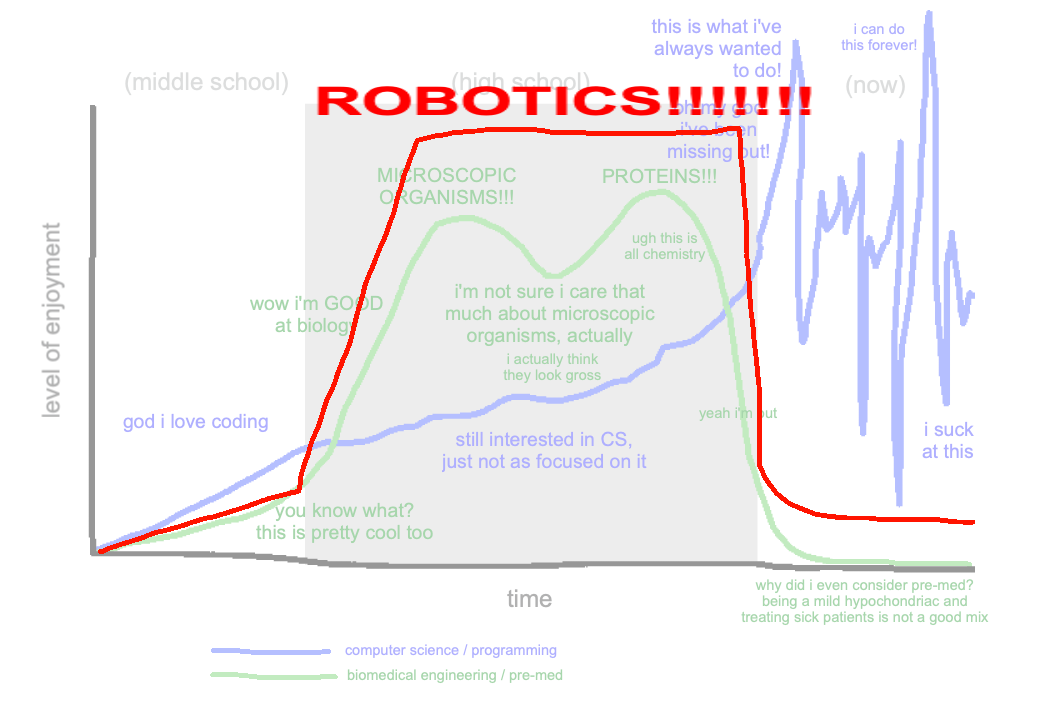 computer science, my old friend. i haven’t seen you in ages

I’m back to my original interest which sparked my decision to pursue STEM in the first place: CS. By this time, high school was pretty much over, so I didn’t know where to start with formally learning CS. When I got accepted to MIT, I thought, “Okay, cool! I’ll just learn CS there.” College is that place where you start learning about the things you’ve always wanted to learn.

Except that when I took 6.0001⁠02 Intro to Computer Science and Programming in Python in the fall semester, there were so many people in my vicinity who already had extensive experience in programming.⁠03 Although this could be because I live in Next House Not just that, but they’ve medaled in whole coding olympiads or have made software that work on their own. The people who had a good amount of experience in programming say that 6.0001 wasn’t bad, the people who had slightly less experience say that it’s a hard but do-able class. I struggled and barely passed the class by one point. A rocky start for someone who wants to be a CS major.

I’m taking 6.009⁠04 Fundamentals of Programming this semester. It’s hard to describe my thoughts on it because it’s driving me nuts but…not necessarily in a bad way? Okay, it drives me nuts in that everybody I seem to meet says something along the lines of, “oof yeah this lab was pretty difficult but it’s definitely do-able” while everything I’ve tried can’t even get me past the first step in a lab.

But it also drives me nuts in that I’m getting obsessed with Python. I have these urges where I want to, like, code more because it puts me in the ‘zone’ in the same way that drawing or playing Minecraft puts me in the ‘zone,’ but all of that initial excitement disappears after I stare at the lab for eight hours at a time without making any progress.

If I’m at my limit, I’ll say in indignation, “I hate this class. I can’t deal with this class.” That’s a huge lie. I love the class so much and its content is everything I’ve always wanted to learn about. I hate that I’m not good enough to make the most out of it. If I really hated 6.009 then I wouldn’t care this much about getting better. I rarely get this passionate and emotional over classes in general.

So there’s this mess of conflicting emotions that I’m stuck between. Programming makes me happy and it’s something I can finally see myself doing for years down the line, but I can’t even go past the basic steps in the class. People commend perseverance in the process of learning, but five days isn’t enough to get me over the first part of the current lab. Getting help is one of the best policies in a course, but I’m too inexperienced to even understand the TAs or my classmates. When I went up to my recitation leader to ask him how to become a better programmer, he called the latter situation a product of the “curse of knowledge”:

The curse of knowledge is a cognitive bias that occurs when an individual, who is communicating with other individuals, assumes they have the background knowledge to understand. – Wikipedia

He told me to practice Python in my free time, which I’ve started to do through CodingBat and also looking up basic Python projects for beginners. I programmed a simple game of ‘Rock, Paper, Scissors’ this past Friday. But my unfinished lab remains the same.

The best way I can compare my feelings about 6.009 is like Captain Ahab being obsessed over hunting down Moby Dick and everyone else thinking that he’s gone insane. But he dies in the end to the titular whale, so I think that comparison sucks. So I replaced him with Elle Woods from Legally Blonde instead, who also pursued the seemingly insurmountable obstacle between her background (a sorority girl who hasn’t done anything related to law) and her goals (getting into Harvard Law School). Except Elle Woods actually survives her story. She could’ve also killed Moby Dick without herself dying if she was given the chance.

Why didn’t I just stick with programming from the beginning? is what’s been bothering me for the past couple of weeks. If I kept programming from seventh grade, I’d probably have a much easier time than I’m having now. It’s just as valuable to discover that some things aren’t right for you, but the time it took to make those discoveries replaced the time I could’ve had to gain experience in programming. It’s a pain, but I can’t change the past.

I’m going to meet my professor this upcoming Monday to chat with him about what I can do to get the most I can out of 6.009. Besides, I’ve had experiences in high school where there was a class that I really wanted to do well in, but even external help wasn’t helpful enough, so I went to the teacher and got the insight I needed to do well in the class. I don’t get this obsessed over classes I don’t care as much about. Maybe this struggle is a good sign of things to come.

There’s also plenty of examples of MIT students who graduated with a major in CS without having any programming experience before coming to MIT. According to what I’ve heard, the learning curve is steep, but it isn’t a barrier.