Putz and Tetazoo are friends!! by Audrey C. '24

field notes from a faraway land

The Putz-Tetazoo exchange program is a longstanding tradition where a resident of Tetazoo⁠01 third floor of the east parallel of the dorm East Campus and a resident of Putz⁠02 second floor of the west parallel of East Campus swap rooms for a week. Putz and Tetazoo have quite the relationship, one that involves many a prank and snark. During their stays, each resident is to immerse themselves in the habits and cultures of their host hall and send back daily field notes. Here are mine from the past week, edited slightly for clarity. I promise that the frequent snide remarks are all in good fun!

Greetings from the west parallel! I have yet to find a souvenir store in the faraway lands of Putz, but I will send a postcard home once I do.

I cannot fathom a daily trek of only one flight of stairs ok maybe that’s a lie, i used to live on stickmen (which is on the first floor). On three separate occasions, I found myself at the outskirts of an even furtheraway land called Floor Pi after climbing an additional flight. I am but a creature of habit.
However, everything good comes with great cost — not only do I feel my quads deteriorating, my journey from the northernmost exit to building 66 has been greatly extended. I am not sure if my thin blood can withstand this level of sustained exposure to the ever bittering elements, but I shall adapt.
My first venture outside of my lodging was to microwave dinner. Ever since the retirement (?) of Tetazoo’s beloved Big Mike, I have grown accustomed to having to irradiate my food for >2 minutes (only to get lukecold results) in our more junior microwave. Putz’s microwave may be small, but oh is she mighty. A mere half minute was sufficient to heat my noodles to a steaming satisfaction!
I have a confession to make. After trying the Putz microwave, it crossed my thoughts that perhaps Putz is a technologically advanced society in comparison to Tetazoo. I quickly abandoned this thought when I learned that Putzens do not filter their water, but rather drink it straight from the tap!! Absolute heathens. Putz not only puts the ‘best’ in asbestos, but also the ‘hard’ in hard water.
My shock did not end there. Perhaps most detrimental to my quality of life, Putz lacks an air fryer — oh I’m sorry, a working air fryer. “My disappointment is immeasurable and my day is ruined.” How else am I supposed to heat up my frozen fries?? Once one starts air frying fries, they can never go back to something as primitive as a toaster oven.
On a seemingly innocuous trip to the latrines, I witnessed blasphemy that nearly knocked the wind out of me: 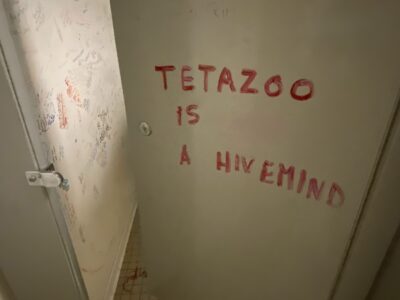 If there’s anything that living in a society has taught me, it’s that misinformation is horrifyingly dangerous. Tetazoo IS NOT a hivemind. Tetazoo HAS NEVER BEEN and WILL NEVER BECOME a hivemind.
After my blood pressure eased back to normal, I sat in a hall meeting in Walounge Wolo. In Putzspeak (or more broadly West Parallelian), Wolo is short for Wood⁠03 one of the three sections of the West Parallel, the two others being Munroe and Hayden Lounge. I have come to associate hallwide meetings with giant plushies, sitting implements lacking back support, and the aroma of feet. Unfortunately Putzen meetings lack all that reminds me of home. While waiting to speak only after one gains possession of a volleyball struck me as strange, it did seem to keep the meeting efficient.
Instead of calling stabsies,⁠04 on tetazoo, one would call stabsies to save their seat to JOKINGLY imply that anyone who dare steal that seat may get stabbed. for legal purposes, this is extreme hyperbole. Putzens yell “seat check.” To say Putzens are pacifists would not be fully accurate, but I am rather impressed that they can suppress the overwhelming anger incited by stolen seats. Later I was informed by Putzen yearlings that “seat check” is rather old fashioned vernacular.
It is late my friends, and I must sleep. Putzens and Tetazoa alike can agree that mandatory 9am labs are an affront to our collective existence. I look forward to integrating myself into the Putzen social community when the sun rises over the west parallel.
Yours truly,
Aannah⁠05 My exchange partner was named Hannah, so she became Haudrey and I became Aannah

I’ve noticed a strange lack of drain covers; see Fig 1 and Fig 2. Do Putzens have a cultural fascination with dark holes with no end in sight? Am I supposed to scream in these voids?
fig 1 my lodging's sink.
fig 2: the shower most proximate to my lodging)
I’ve always known that in lieu of cats, Putz’s creature companion of choice is the humble roach. I have yet to find out what redeeming qualities roaches possess, as they’re nowhere as pettable nor fluffy as cats. I was minding my own business in Basha (the lounge that’s not Wolo) when I heard a concerning whirr and equally concerning exclamations of … delight? Digging into my limited repertoire of roach facts, I remembered that roaches can fly. This led me to the conclusion that this whirring entity (see fig 3) must be an exclusively Putzen roach species. 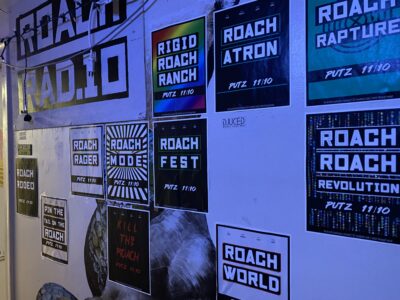 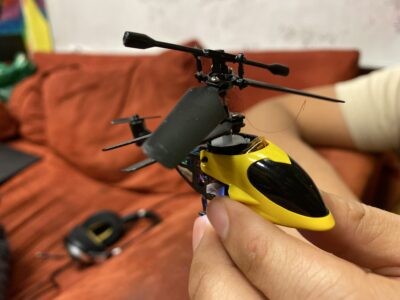 I shall retreat into slumber early tonight. Until the morning Green Building Construction Shift, sleep tight my friends.
Yours truly,
Aaannah

I was once again greeted by Green Building Construction Noise on this otherwise fine morning. After coming to my senses, I poured myself a cup of “almond milk” that my exchange partner specifically instructed me to drink. Are almonds an evolutionary cousin to the cow or goat native to the Putzen highlands? I was initially hesitant to try, as milk from the common cow gives me explosive diarrhea. Remembering that I had recently obtained Lactaid, I ventured a sip of almond milk. A little flat compared to normal milk; perhaps being raised on Putzen hard water disrupts almondian endocrine function. 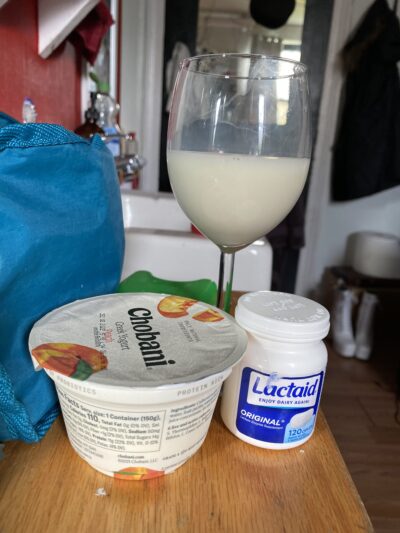 For my second course of Putzen fine dining,⁠07 I'm only counting food I received/made on Putz as Putzen fine dining courses; I ate a lot more that day than just the stuff noted here! I did a lot of meal prepping beforehand because I knew that cooking without most of my usual condiments/spices/equipment would be inconvenient. I attempted to fry an egg in the Putz kitchen. What would be a trivial task back home turned out to be a massive undertaking on Putz. I don’t even know where to begin with these stove knobs —they are literally gas explosions waiting to happen?? By the time I figured out how to turn the stove fully off, what should’ve been a free spirited, runny yolk had congealed into chalky disappointment. ;-; 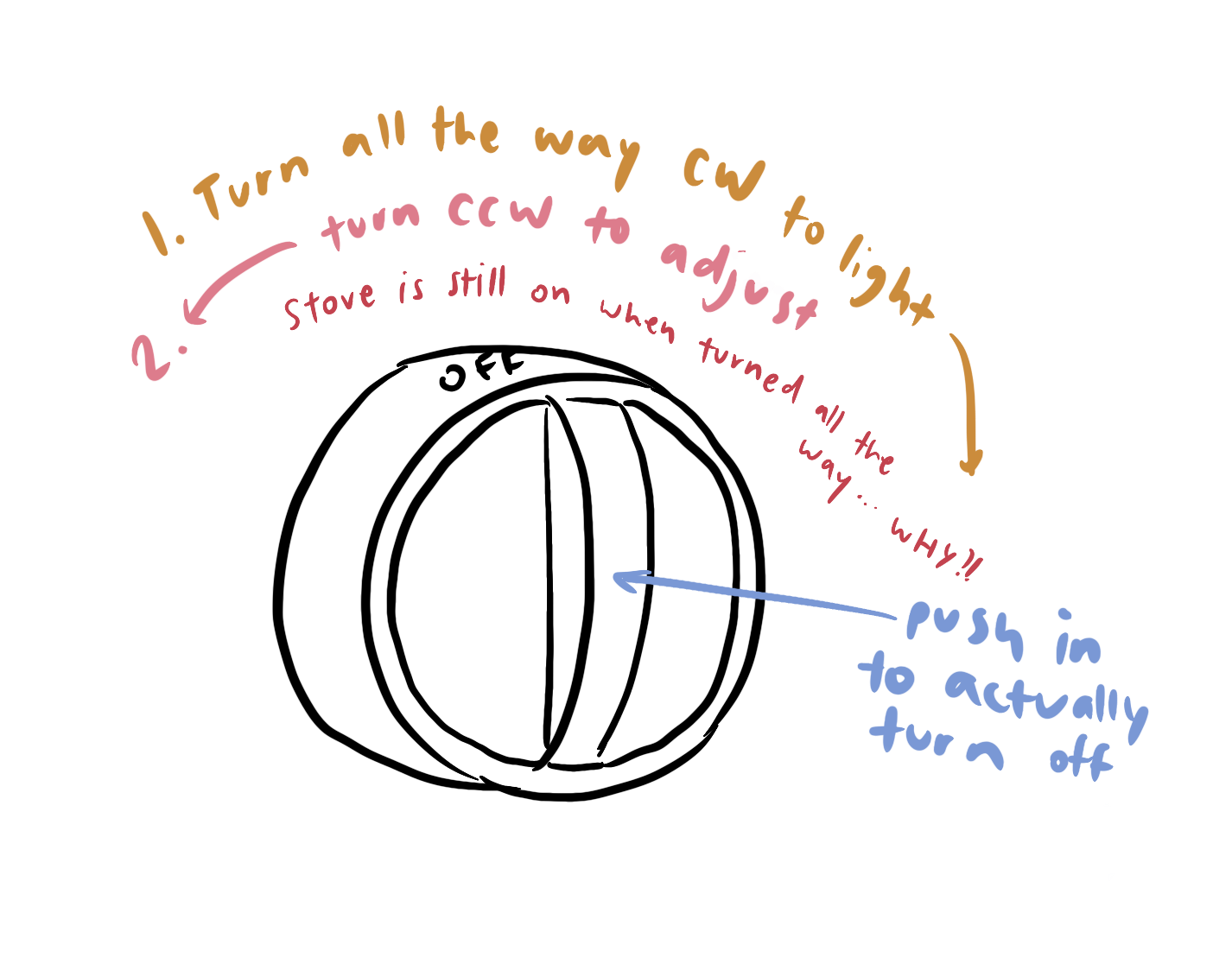 fig 6: how to use Putz’s weird ass stove, for future reference 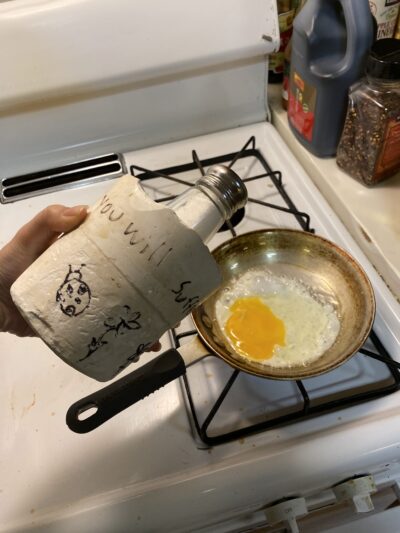 fig 7: an attempt at ergonomics? (full text reads “you will suffer.”)

As an insult to injury, that pan was not nonstick. In fact it was very very sticky, despite me using hella oil. 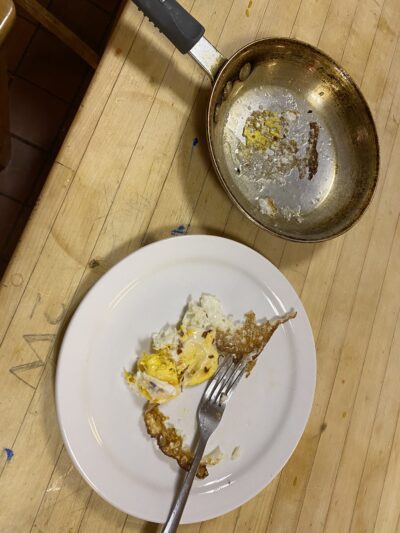 I guess the chaos of my egg was necessary to balance out the sterility of the Putz kitchen table. Burn marks would give it some much needed character.
My last challenge was scrubbing egg residue from the very not nonstick pan. This would not be not a problem for Scrub Daddy, which now exists in abundance on Tetazoo but is absent from Putz. Putz’s limp blue sponges were pathetic. 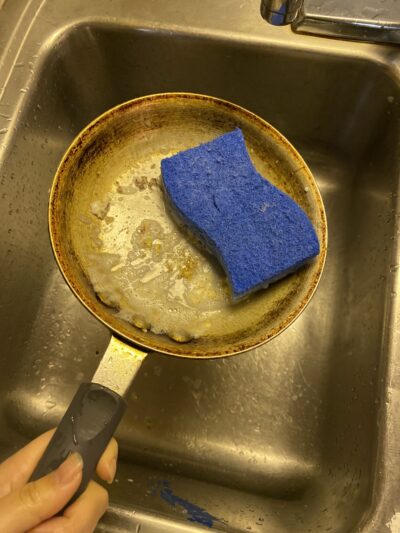 My third course of Putzen fine dining came from Hall Feed, which Wolf ’24 accurately dubbed “misdirection […] for ‘hall meeting'” in his field notes one week prior. I was lured into joining the crew that marched down the hall starting from the Munroe end, emitting ‘haaaaaaaaaaaaaalllllllll [upon entry into Hayden] feeeeeeeeeeeeeeeeeeed’ in one prolonged breath. Instead of obtaining an air raid siren,⁠08 It is Tetazoo tradition to walk down the hallways with a handcranked air raid siren on the night of someone's birthday Putzens have elected to become an air raid siren. Intriguing. I was offered several variations of Oreos, a sweet treat that I enjoy immensely. Apparently this was one of the better feeds, with beans on bread and ketchup on spaghetti having been showcased in previous Hall Feeds’ menus.
Yours truly,
Aaaannah

Greetings from the east parallel! I have returned to my homeland safely.

My apologies for not sending day 4‘s report in a timely fashion. I was out for most of the day (like outside out for 5 hours straight)⁠09 for a fire show rehearsal! and kabonked after returning to my lodging.
During the half hour when I was actually conscious on Putz yesterday, I had a notable exchange with a resident.
“Wait, you live here right?”
“Yup”
“Ohhh you must live far down that end right? [gesticulating wildly towards Wood] I just never really see you around; I think I’ve only seen you here like two or three times.”
True, I have been living on Putz for three days prior to this conversation and probably ran into said resident two or three times. It didn’t occur to me that this resident thought I was a native Putzen (that is, a ghosty one), instead of the exchange transplant.

“Nah I live here. [gesticulating wildly towards my lodging, whose actual resident is quite the notable one… as in the dorm president]”

“OHHHH SO YOU’RE LYING YOU ACTUALLY DON’T LIVE HERE [gesticulating accusingly towards me]”
Rats. It was only then when I realized my grave mistake. I could’ve rebranded myself as Aaaaannah, the Putzen who lives somewhere in deep Wood.⁠10 i know what this sounds like :p, but the 'deep' part of a hall section refers to the part closer to the end of a parallel, whereas 'shallow' part refers to the part closer to the middle
But once I returned to Tetazoo, I realized that I have deeply missed my homeland in all of its catful, roachless(ish) glory. I have also missed the sheer amount of stuff that occupies every corner of Tetazoo, as the sterility of Putz was beginning to wear upon my filth loving soul:
During the hall meeting on Day 1, there was the question of whether lounges should be cleaned both before and after a hypothetical party. My mind immediately jumped to memories of scooping out trash from Walounge⁠11 one of the Tetazoo's lounge, short for Walcott Lounge. Walcott is a section of the East Parallel by the armful and shopvaccing layers of mystery substances from the carpet — of course you need to clean lounges before a party! But then I realized the fundamental difference between Wolo and Walounge—Wolo was inherently devoid of the filth that is so integral to Walounge’s state of being.
“You don’t need to clean a lounge that’s already clean,” I ventured into the conversation.
“THAT’S SUCH A TETAZOAN STATE OF MIND! THIS IS NOT YOUR PLACE TO SPEAK!” Alas, my contribution was quickly shot down.
Nevertheless, thank you Putz for treating me well. 10/10 lodging, 9/10 living community (that 1 point went towards lacking an air fryer), 7/10 almond milk, -1/10 stovetops.
Yours truly,
Aaaaannah