they say don't meet your heroes, but some exceed your expectations

Earlier today, FIRST — an international youth organization dedicated to science education and best known for its eponymous robotics competition — announced that its cofounder, MIT Professor Woodie Flowers, had died after medical complications. He was 75, and one of the finest men I have ever known.

For many of our readers, I suspect Woodie needs no introduction: to the tens of thousands of FIRST participants around the world, and to the decades of MIT students he taught in Mechanical Engineering, he was an inspiration, not only intellectually but personally, ethically, and emotionally. As a cofounder of FIRST, he was known for bringing not only the curriculum of his iconic MIT engineering course 2.007 to the world through the FRC competition, but more importantly his ethos of “gracious professionalism” that was always held as the most fundamental principle, far more important than who won or lost. He was the absolute moral core of the entire FIRST community, and commanded that respect and authority solely by living the same values he hoped to see in the world.

Woodie was one of the most gentle, thoughtful, kind, peaceable people I have ever encountered: an attentive listener, a thoughtful respondent, quick to laugh, impossible to anger, and radically human-centered in everything he did. I had admired him while a FIRST student in high school; when I got to know him well while working at MIT, he surprised me by being exactly the kind of person he had always seemed to be from afar, just moreso. They say never meet your heroes, but I am here to tell you that Woodie is one of the single-digit number of heroes I have had who not only survived first-contact, but actually got better the longer and better you knew them.

Over the decade I’ve known him, I never saw Woodie without his signature Chuck Taylors (sometimes gold sparkled, beneath a tuxedo, for special occasions), ponytail (tied back, for safety’s sake), and a twinkle in his eye. We’re both morning people, if I found myself walking up the 77 steps at 7AM, he was often there, in Lobby 7, outside Bosworth’s, drinking a coffee and reading the newspaper, comfortable in the quiet understated grandeur of that great domed hall. He liked it in Lobby 7; sometimes, when prospective students who had done FIRST came to visit campus, he would clamber spritely up one of the seven-foot plinths and sit atop them, Chucks kicking like a contented child, while he talked about the importance of centering humans in all technological endeavors. The only time I ever saw him speak ill of anyone or anything was anything — competitions, inventions, popular media — that endorsed or enabled violence.⁠01 Woodie famously forbid having <em>FIRST</em> competitions be based around robots 'fighting', as the popular <em>Battlebots </em>series had done. As he later told interviewers, this opposition was rooted in a car crash he had barely survived as a young man in rural Louisiana that left him with a hard-coded aversion to any kind of violence. Not in a naive way, but out of a deep, sincere, moral commitment to peace. 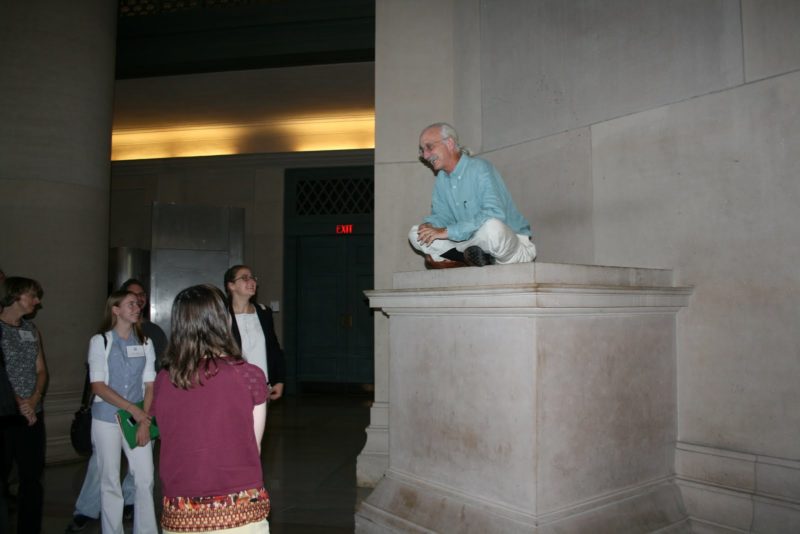 After I posted this, Sarah Heimlich, one of the students from this story, sent in a photo of Woodie atop the plinths.

Like many other members of the FIRST and MIT community, I am shocked and heartbroken by Woodie’s passing, which came much, much too suddenly and soon. He was not a young man, but he was the most youthful man of his age I have ever encountered; as my friend (and MIT alumna) Ann-Marie Thomas tweeted, she and Woodie had been planning a zero-G flight just within the last few months. The last time I communicated with him (beyond a quick wave in Lobby 7) was in May, when I asked if he would be available to speak to some FIRST Dean’s List Award winners who were visiting campus. He responded in typical Woodie fashion:

Woodie, I love you, and I already miss you more than I can say. The world still needed you so much; maybe now more than ever. Thank you for being one of the most important role models in my life. I will never live up to the example you set, but I promise to do my best to try.

If you have memories of Woodie or want to talk about what he meant to you that you want to share, please comment below. The ChiefDelphi thread remembering him is here. I’ll update this post if and when I learn more about memorials, obituaries, etc.

In the meantime, mindful that not everyone reading this post will have had exposure to Woodie before, I’m posting some video clips about him below, so that you might get a sense of what made us all love him.

A short video profile of 2.007, the course that later became FIRST Robotics, with archival footage going back to the 1970s.

Woodie talking about ethical behavior with teams as this season began.

For the completionists, a two-hour long interview with Woodie for the “Infinite History” project back in 2016.