The science is a lie. The exclamation points are not.

Have you ever heard the joke: What’s green and has wheels?

A logical person might stroke his beard and say, “Hm. Well let’s see, that could be one of many things. I’m thinking maybe an alligator with rollerblades? Or maybe a green van? That’s green and has wheels, right?”

A practical person, however, would recognize the tell-tale signs of a bad joke and wait for the inevitable punch line.

In which case I’d happily comply and say, “Grass. I lied about the wheels. Ha!”

It’s the epitome of the anti-joke: unexpected and irrational enough to elicit the obligatory chuckle of awkwardness, but still, to everyone’s chagrin, logically sound in a roundabout kind of way.

The Festival of Bad Ad Hoc Hypotheses (or BAH!Fest for short) that was held Sunday night in Kresge auditorium was essentially one enormous anti-joke. The premise? Have seven educated individuals present seven well-argued, but astronomically absurd evolutionary theories in front of a panel of distinguished judges. To the victor go the spoils. And by spoils, they mean a 3-D printed rendering of Charles Darwin looking doubtful and saying, “I guess so?”

I had seen fliers for the event plastered all over campus, the colorful paper and clever acronym drawing me in. As an added bonus, I found out that the event would be put on by the writer of the Saturday Morning Breakfast Cereal web comic, Zach Weinersmith. How could I resist the intersection of my two loves, biology and comically improbable possibilities?

Can I just take a moment here to marvel at the beauty of the message boards on campus? Honestly. There’s just something magical about the intense disarray of clashing colors and screaming words that fascinates me. Every day, there are new events, new club meetings, and new advertisements to peruse. Most people just stream by, either chatting with friends or staring at their feet, absorbed in their own thoughts. But the message boards are home to a wealth of information, so take advantage of them. If you ever see a girl standing in front of a message board for an irrationally long time, it’s probably me. 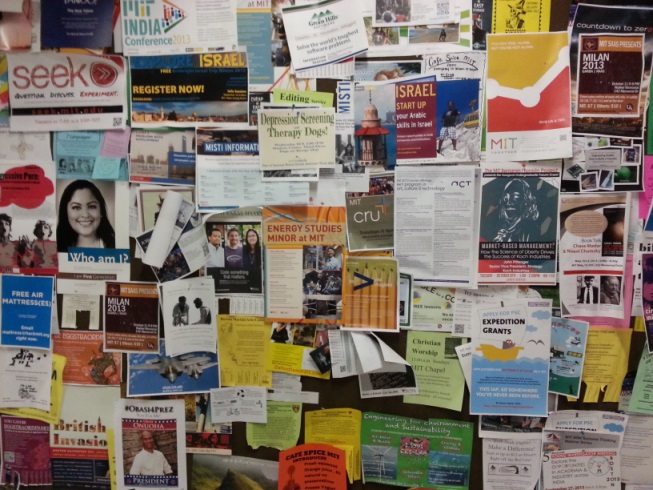 Bask in the entropy of informational dissemination

Thankfully, my roommate and I had pre-ordered tickets online; the event sold out. We entered Kresge without any expectations and boy, were those expectations exceeded.

Zach Weinersmith and the host Ben Lillie were wizards. Real life wizards, minus the flowing beards and silly robes. But probably a lot funnier than most wizards. So actually, scratch that, they weren’t wizards at all. Just really funny guys. They warded off the 25 minute technical difficulty with ease, introducing the premise of the event once again and warming up the audience with a semi-enthusiastic “MIT greater than Caltech!” courtesy of an online bet and a sold out show. The crowd laughed and clapped like it was adaptively beneficial to be the loudest ones there.

Here’s a picture of Zach Weinersmith presenting the very hypothesis that started it all. (Sorry for the forest of heads and poor quality. I was trying to be sneaky with my photography) 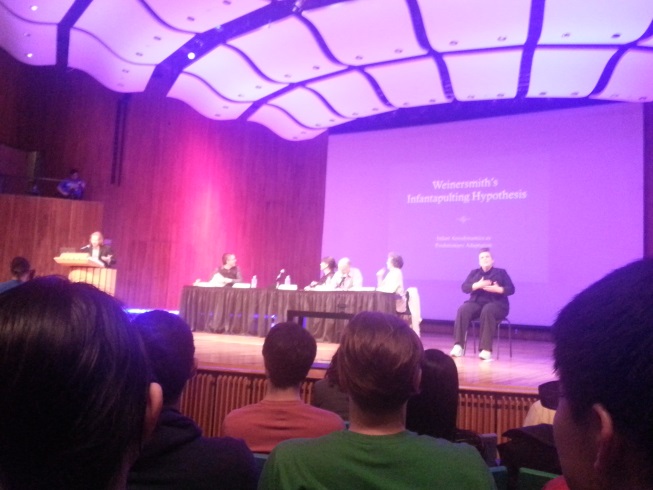 Yes. You read that correctly:

Infantapulting – (verb) the act of catapulting an infant from village to village in order to increase the diversity of its gene pool.

I won’t go into the details of his hypothesis, but I will say that they involved baby aerodynamics, laminar flow, and our attraction to people with smooth skin.

Every presenter wielded graphs, citations, and visual aids with aplomb in their attempts to woo the judges. My personal favorite was a hypothesis that claimed, rather successfully if you ask me, that animals evolved to taste like chicken in order to trick humans into domesticating and breeding them. They covered all their bases and even included reasons for why frogs taste like chicken, but polar bears do not. (Hint: Polar bears eat people. People do not eat polar bears.)

I wish I could write down every logical conclusion and hilarious joke from the BAH!Fest, but really, my reconstructions would be nothing compared to the experience of sitting in a room filled with scientists and fellow geeky brethren while being bombarded with pseudo-science. You’ll just have to go yourself one day and tell me all about it.

Ultimately, after the judges’ deliberation and a decibel measurement of the crowd’s enthusiasm, 3-D doubtful Darwin left Kresge in the arms of the presenter who had explored the evolutionary advantages of a screaming baby. It was all very deep stuff.

I didn’t leave empty handed either though. My roommate and I, due to a little something called sneaking-out-before-the-event-is-technically-over, ended up first in line to get our posters signed! 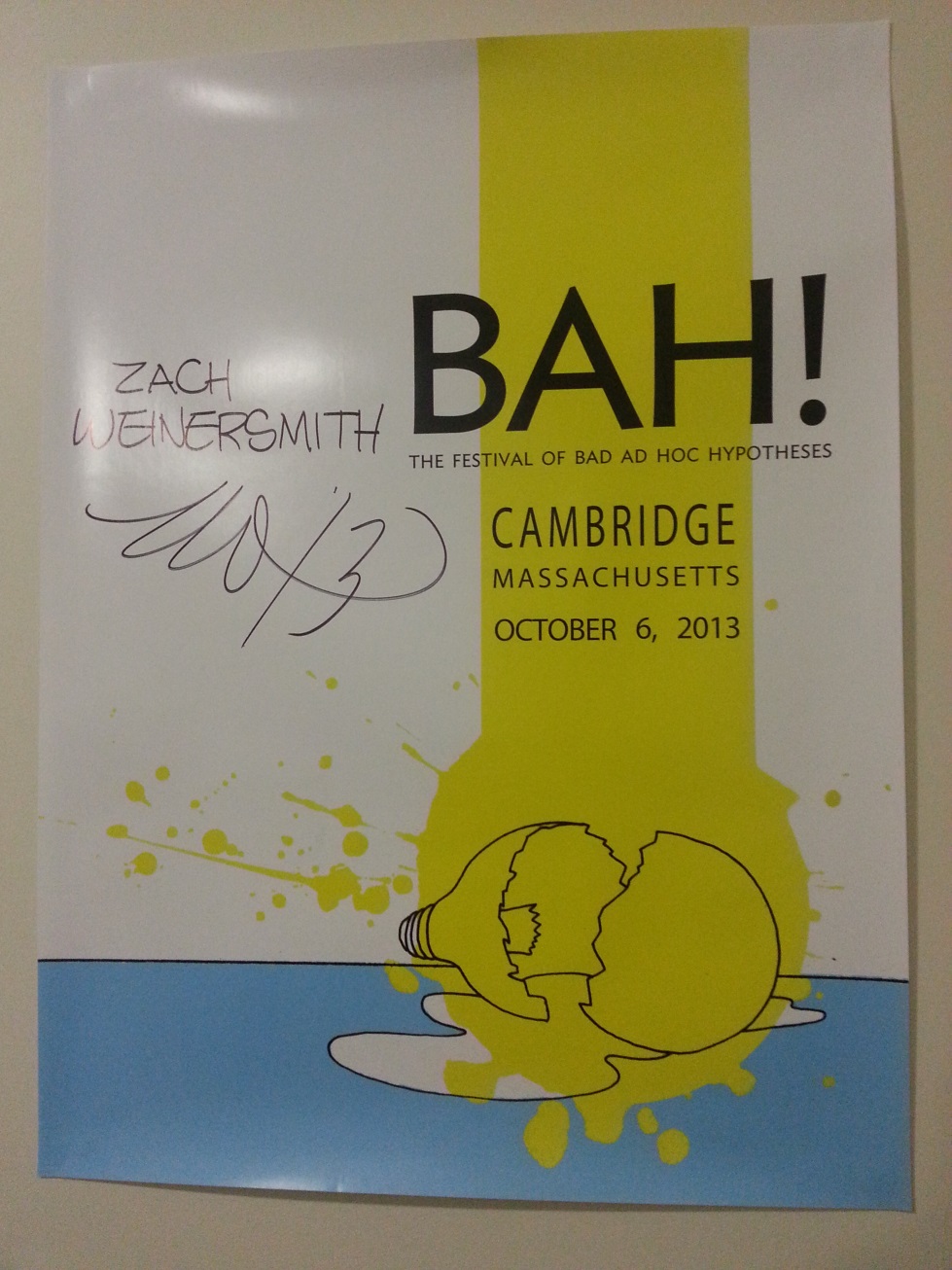 With our loot tucked safely under our arms, we scampered back to Maseeh and the more rationally sound world of vectors, DNA translation, and the ideal gas law.

I’m staring at the signed poster on my wall right now and it looks pretty lonely. I know there will be many more fun-filled events in my future and, maybe someday, my wall will look just as awesome as the colorful message boards of MIT.