we ran! a competition! virtually!

I feel like I’ve been involved in science bowl forever. In 8th grade, my middle school science teacher started a team at my school, and I loved it. Science bowl, for those of you who haven’t heard of it, is a competition where two teams try to answer science trivia before the other team can, buzzing in⁠01 speaking of buzzing in, RIP to Alex Trebek, who died 1 week ago :(  as soon as they know the answer. The rules are a bit more complicated than that, and are best explained by watching an example match.

But I moved to Nevada after middle school and lost touch with science bowl. Fast forward to the end of sophomore year: I remembered science bowl existed and realized I had nerdy friends who would totally enjoy science bowl. I rounded up a handful of my friends who liked biology, chemistry, earth and space science, and physics (I was more of a math person at that point), dragged in my physics teacher as a coach, and we practiced by slapping tables (since we didn’t own a buzzer system). We won our state competition in my junior year, our first year competing, and we were hooked. Studying textbooks in our spare time, making spreadsheets to analyze all our question-answering behavior, and more. Above all, my science bowl team was fun for the simple fact that every practice felt like it was just hanging out, rather than a “practice”. (Science Bowl to this day continues at my high school, and probably is my biggest lasting impact there. This also was the subject of one of my MIT essays…)⁠02 I actually opened up that essay for the first time in years to see what I wrote, and <span class="md-pair-s "><em>wow</em></span> I still love science bowl just as much

The summer before my freshman year at MIT, I scrolled through the club listing page and found a group that organized the Northeast Regional Middle School Science Bowl, an official competition that middle schools could compete in to qualify for Nationals. I emailed the president, Kathleen S. ‘19, to see how I could get involved. A week into my first year at MIT, I walked by my wing’s main lounge and found someone wearing a science bowl t-shirt, soon realizing that Kathleen actually lived on the same floor that I did in Next. And so began my involvement in organizing science bowl competitions, helping to recruit new schools, organize volunteers, and now serving as coordinator myself.

Last year was my first year as coordinator, and in the spirit of trying new things, we ran an invitational competition for high school students. We also were able to organize our regional in the spring just before the corona-exodus, which left us with a big question: how do we run science bowl virtually?

For the virtual 2020 finals, National Science Bowl decided that it would use a format where teams answered questions in their own rooms, rather than against a live opponent. To prevent lag from being an issue, gone were the buzzers; instead, students raised their hands to answer a question. I helped volunteer for that competition, and the format seemed to work out remarkably well, given all of the issues of a virtual world. But with this new format, gone were the “head-to-head” and “speed” aspects of the competition that I personally loved about science bowl.

In August, Science Bowl told regional coordinators that we’d use that same structure for our spring competition. With this announcement, our club, filled with science bowl alumni, wanted to figure out some way to recreate the joy of in-person science bowl in a pandemic world. Our solution? Run our high school invitational (virtually), and create a way to run head-to-head matches.

There’s a lot of work involved in managing 80 volunteers and 40 teams with almost 200 students: creating rules for matches figuring out buzzer systems, managing communication with them, training volunteers, and creating Zoom links. How do you even manage that all?

For me, that answer is delegation. I served as chair of ESP (we run Splash, which ran this past weekend!) last year, and one of the biggest lessons I learned was that directing something isn’t about doing everything yourself — it’s about making sure everything gets done. That shift in mentality is honestly what has kept me sane in being a leader without feeling like I need to dedicate every waking moment to a club.

How did our club do this? Truth be told, I don’t know all the details, even as the “coordinator”. That’s because a different member of our organizing team, Joshua P. ‘22, ran it all. He recruited question-writers, ran weekly check-ins to see how they were going, and helped develop question-writing guidelines for each science bowl category to improve the quality and consistency of our questions. Other members, in turn, took charge of different areas of the question review process, such as double-checking our questions for consistency (Mihir S. ‘22) or writing code to generate questions in nicely-formatted packets (Andrew G. ‘22).

Similar delegation happened throughout our competition: running our volunteer training, keeping track of our money, reviewing emails, updating our website, figuring out buzzer logistics, and more, all with similar stories of delegation. Some things I still did myself, like creating spreadsheets to generate personalized emails to every team and volunteer with their Zoom links for the day. But running all aspects of science bowl by myself would be an impossible task, and I’m incredibly thankful for the people that help me run it: Alborz B., Andrew G. ‘22, Anka H. ‘24, Joshua P. ‘22, Katherine L. ’24, Lynette C. ‘24, Mihir S. ‘22, Shriya R. ’24, and Sujay K. ‘21.⁠03 if any of you are reading of this you all are wonderful and i appreciate you all so many. 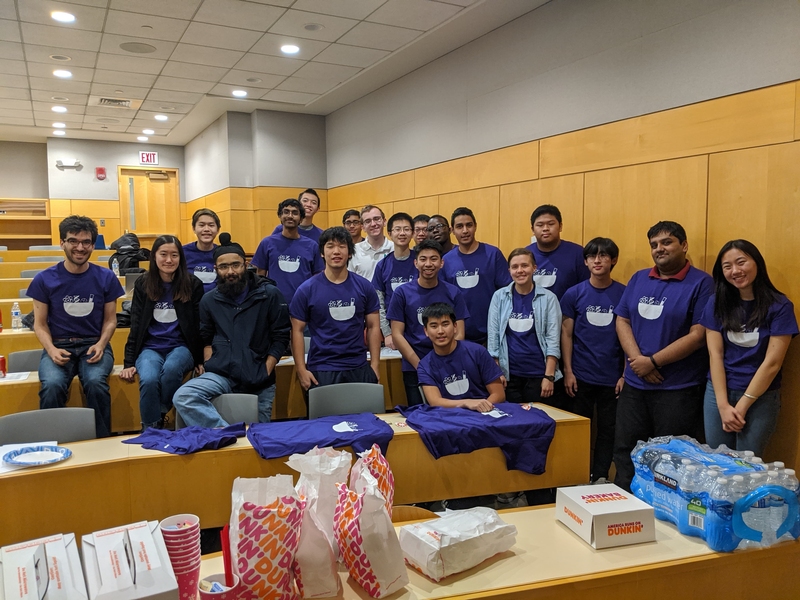 some of the volunteers and officers who make science bowl happen! to be clear, this picture is from last year’s invitational in november, not taken during pandemic times. wear a mask and stay safe everyone! and yes, our shirts have bowls of science on them

Last Saturday, it all came together. I woke up at 8 AM (who ever wakes up before 10?), took a long shower, and made my bed so that high school students in the opening ceremony couldn’t judge me for not making it. The day went smoother than I could have expected — the rules seemed to work well, no online systems broke, and everyone received the correct links to their Zoom rooms. Of course, some things went wrong, too — some delays, a few vague rules, small typos in questions. But we ran a science bowl invitational last Saturday, and I couldn’t be happier that it happened :)