Way back in September, I had the difficult, difficult task of writing my blogger bio. It includes the following paragraph:

the silly: you may see me zooming around campus on my white razor a6 scooter, attempting to escape the zoom rooms which fill my life now. i love the color orange (yes, i know my avatar does not have an orange shirt i am sad) and have an entirely orange getup that i wear occasionally. i have been described as a golden retriever bounding between everything from scrabble to whiteboard care to dotted lines on blackboards (i can make circles in both directions) to memory to mental math and will very happily teach you about any of them. i came into mit wanting to be a 14-2 (mathematical economics) and 2 (mechanical engineering) double major so that i could have a M.E.M.E. degree. i have enough sayings that you can make a soundboard of me and no one would notice for weeks; these include things like “big iff [if and only if] true” and “i can only count to 3” and “i haven’t seen you in years” and “[insert some thing or event]? in this economy??”.

I have two updates on this today.

For the past 3 years, my primary form of transportation was a scooter. Not the super-cool and high-tech electric scooters that have been growing in popularity. Plain old kick scooters. The transportation devices that made second-grade me think he was the coolest.⁠01 he was.

I didn’t always use a scooter to get around; my freshman year, I just walked everywhere. No easy way of getting around at all. For the most part, this was fine! MIT is a pretty walkable campus — the walk between Next House (my home, and the furthest west dorm), and the Economics department (where I had many classes, and one of the furthest east buildings), is 21 minutes per Google Maps. But sometimes 40 minutes of walking feels like too much.⁠02 Of course, there’s other ways of getting around campus, namely the <a href="https://web.mit.edu/facilities/transportation/shuttles/tech_shuttle.html">Tech Shuttle</a>; </span><span class="md-plain">however, I don’t like holding myself to the schedule of buses and needing to time it just right</span><span class="md-plain">

In ESP’s office, we have a few scooters lying about. They were donated by ESP members when they graduated, and are absurdly useful for getting around campus (outside only, no scooting in the halls allowed!). I used them very much at some of our events throughout my freshman year, and enjoyed them very much.

That summer, with some of ESP’s members graduating and becoming cruft,⁠03 cruft = old person. it also means useless junk. it also means the act of collecting useless junk. i was googling about the word cruft and, quoting from <a href="https://searchsoftwarequality.techtarget.com/definition/cruft">here:</a> “Urban legend in Cambridge, Massachusetts holds that the term “cruft” was coined by MIT students as a derisive comment on the electronics-filled windows of Cruft Hall at Harvard University. Cruft was part of the old physics building at Harvard, where it served as the department’s radar laboratory during WWII, which led to the existence of many kinds of wonderful but quite obsolete technological gadgets remaining on display.” i have <em>never</em> heard this explanation in four years of mit, and i am sure that almost no one currently here has heard it either. unclear how true it is  one sent out this email: 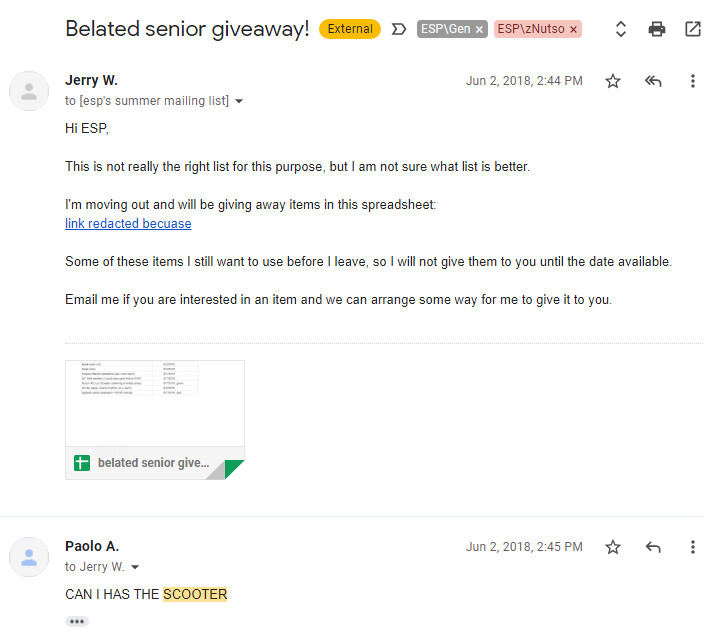 yes, i did respond in 1 minute

Hi ESP,
This is not really the right list for this purpose, but I am not sure what list is better.
I’m moving out and will be giving away items in this spreadsheet:
[link redacted]
Some of these items I still want to use before I leave, so I will not give them to you until the date available.
Email me if you are interested in an item and we can arrange some way for me to give it to you.

To make a not-that-long story short, I got Jerry’s Razor A5 Scooter, in its slightly janky form. This scooter is slightly cooler than the Razor scooters that might be part of your early childhood memories. Not only do they have a flippin’ cool kickstand, but their larger wheels (8” in diameter) make rolling over cracks and bumps in the sidewalk much smoother. However, the bearings in the steering column were a bit wonky, making it hard to turn. I used that scooter faithfully for my entire sophomore year, scooting at least 2 miles every day (from Next to Econ and back), putting hundreds of miles on it over several months.

Towards the end of sophomore spring, the wonkiness turned into actual danger for me. The bearing became so loose that the front wheel would sometimes turn independently of the handle. Also, the screws on the steering column started to become stripped, meaning that I couldn’t even take apart the scooter to (try to) fix it. So at the start of my junior fall, I upgraded to a new A6 scooter. 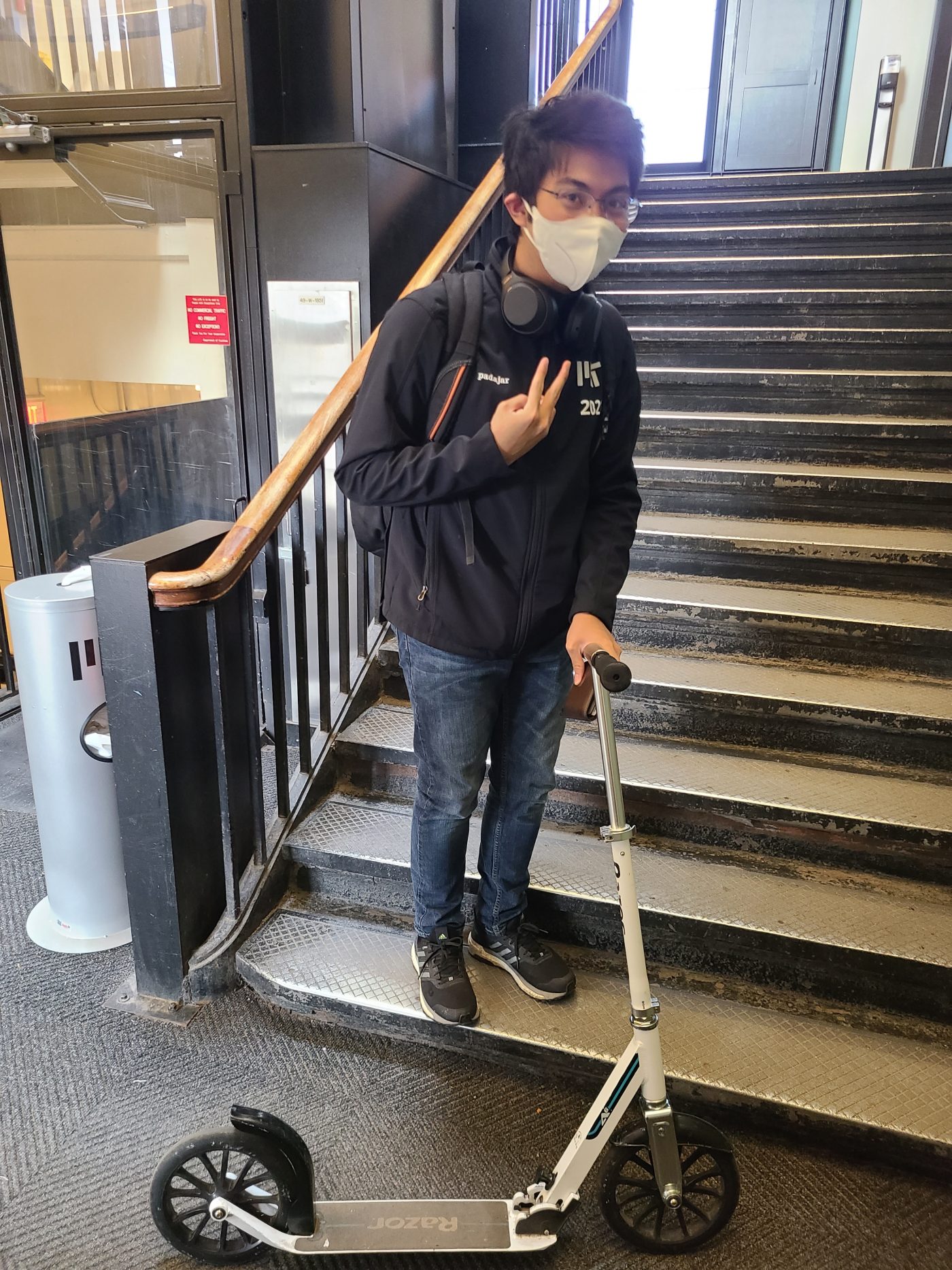 what a cool kid amirite. (this is the only photo I can find with me and my scooter. pc meghana v. ’22)

The A6 model has a few upgrades — anti-rattle technology, somewhat bigger, a refreshed paint design. Last year I used it for all of my daily commutes to the economics department. This year, it’s seen much more use as my grocery transportation device; imagine a canvas bag hanging on each side of the handle, and me scooting (very slowly) back home :)

Scooters have their advantages over bikes. They’re much easier to store; I can just bring it inside classrooms, without needing to lock it up. They’re much lighter, easier to maintain, and can fold down really small. The biggest benefit of a bike is that they are much more professional than scooters and that travel faster than scooters. (But scooters are faster than you think! I usually travel about two to three times walking speed.)

A few weeks ago, I decided to stay in Cambridge for the foreseeable future. And so I started thinking about upgrading my transportation; after all, I probably shouldn’t be the grad student who scooters everywhere. With people graduating and leaving the area, I figured that there must be someone approximately my height who was selling their bike. I procrastinated on thesis work by scrolling through Craigslist and Facebook Marketplace to see what was for sale. And then, I found the one. 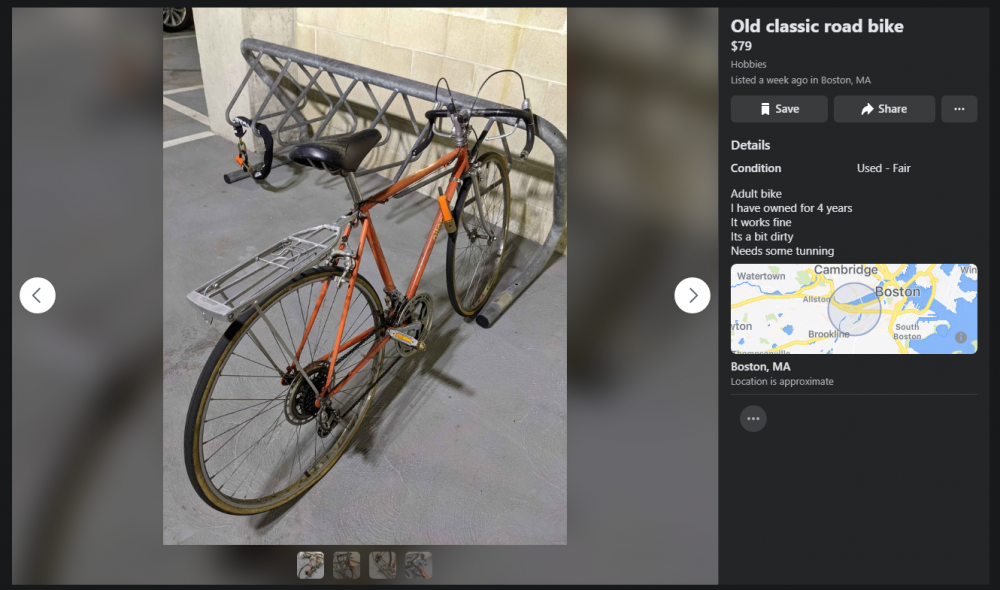 I wasn’t intending to get an orange bike. I was just looking for something in decent condition for not exceedingly high prices. But I am a sucker for the color orange. And have been for many, many years.

yes, that is me in preschool. bright orange backpack. it started early
middle school, bright orange continues
midnight ihop trip, freshman year at mit. the all-orange getup as described in my blogger bio
me dressing up as a pumpkin for halloween, mit junior year

I met up with the seller, who had used the bike for commuting for the past few years. It wasn’t in the best shape, in part because it wasn’t used much during quarantine. But it fit me, seemed very sturdy and dependable, and I decided to buy it. I walked it back to a bike shop near campus to figure out what needed replacement, (it turns out, >$100⁠04 also, many more dollars spent for a sturdy lock (see below), headlights/taillights, a bell, and fenders (not pictured) in new tires, new chain, replacing the rear bearing), and voila! A bike for commuting around Cambridge! 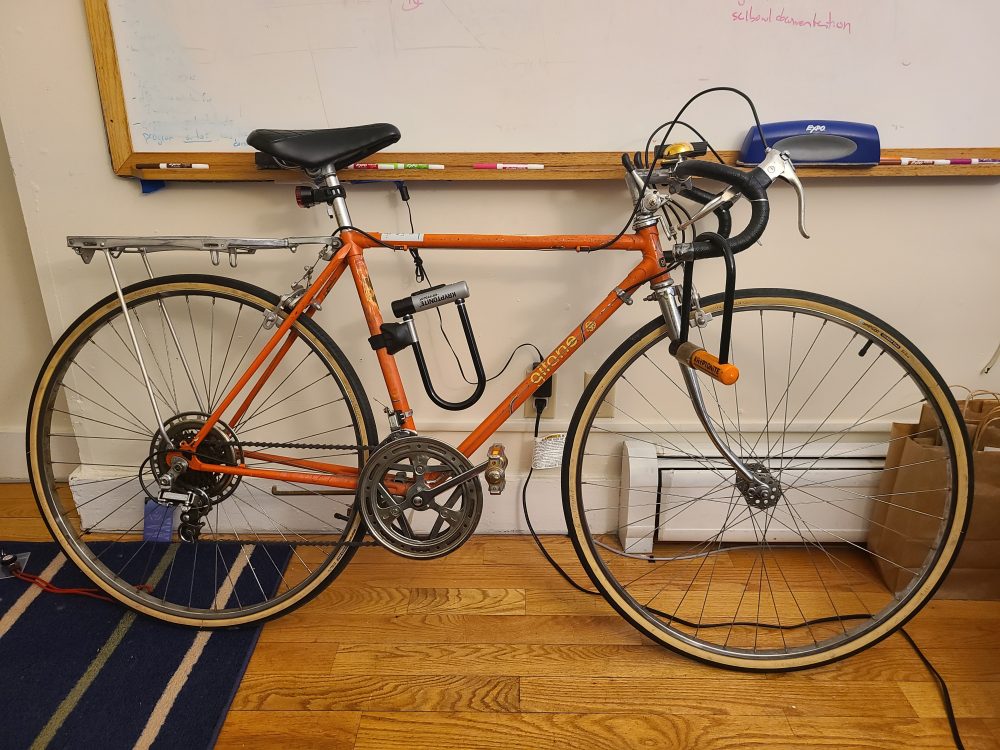 !!! i have a bike!!! (the perspective here is very odd i promise the wheels are the same size)

I do not claim to be an expert in bikes after my 2 weeks of having a bike. (Hopefully, I’ll learn a lot over the course of owning this bike…) A few notes about bicycles at MIT that are potentially useful to incoming students:

My days of scootering aren’t totally behind me, though; I still I’ll use my A6 for getting around to places nearby without needing to take out my bike. But for now, here is on to new adventures, this time on an exciting orange bike :)