This is why/how I'm doing it, in case you were curious

I’m going to start this out with a quick disclaimer: no, a double major isn’t for everyone and please don’t feel like you’re an inferior student/person/wizard/etc. for only pursuing a single major. Do what makes you happiest :D

For me, a double major is how I’ve decided to navigate MIT and attempt to reconcile my diverse interests in both biological sciences and storytelling/media. (For those curious about this ongoing struggle, I drew a comic about it pre-summer). I love learning about biology, but have been left wanting for different electives among a sea of MIT biology classes on the microscopic, the thermodynamics of drug absorption, or understanding the progression of disease in humans. I also want to explore how media shapes our culture and how we have been shaping media, from TV shows and video games to social media and the concept of spam/internet trolls. I want to learn how to write more fluidly, how to create things, how to navigate the seemingly unfathomable internet and hone my voice and opinions into intellectual swords to cut through bigoted arguments and bathe in the (metaphorical) blood of my enemies — well, you get the point.

Anyway, that’s how I decided on pursuing both 7A and CMS. 7A is a slightly more flexible version of the Course 7 curriculum, and is designed to allow students to pursue classes in other majors and broaden their studies. Much like other ‘flexible’ majors, such as 2A or 8-flex, students who declare 7A can potentially open up more multidisciplinary career paths by taking a bunch of different courses or majoring/minoring in another subject. And because I like biology, but don’t necessarily want to work in a research lab or go to graduate school solely for biology, I decided to take advantage of MIT’s unique Comparative Media Studies department and enroll in as many awesome courses as possible before I graduate.

As for how to officially register for a double major, this is how I went about it.

1) Fill out the change of major form by putting in your student information (which the MIT Admissions blogs really doesn’t need to know) and finishing the “changing a single major” section as shown (or however is appropriate/relevant for you):

2) Click around on the new major’s website, focusing on the “people” or “staff” pages, until you find the Undergraduate Academic Administrator. They are now your best friend. Well, not exactly, but being nice to them will be integral to the smoothness of your major changing process.

3) After finding the Academic Administrator, send them a nice email. Something along the lines of:

My name is Ceri R., and I’m a rising junior currently majoring in Course 20. Based on the classes that I’ve taken so far, though, I’ve found the CMS department to be much more enjoyable/hospitable/etc. and decided to officially change majors.

According to the change of major form, I should meet with you to talk about this change and probably start arranging for a new advisor. Is there any time this week or next that is convenient for you?

Thanks for your help, and I hope to hear from you soon!

(I may or may not have sent basically this exact email.)

4) Meet with the Academic Administrator! Be excited! Also, be prepared to discuss information like what classes you’ve already taken in this major, a general plan to finish it by graduation, and questions about how this new department structures advising and other administrative things. Before switching majors, you should have given this process some thought, so let your curiosity/enthusiasm show a little bit!

5) Turn in your change of major form to the Student Services Center (11-120) and obsessively occasionally check WebSIS, MIT’s online registration/student information platform, to make sure it went through. Some departments will pass the form on through the MIT administration for you, so double check with the Academic Advisor (this might be a good question to ask them at your meeting from Step 4).

Note: I learned (after obsessively checking WebSIS) that even though this form states that “change of major takes effect immediately” in the summer, it is very likely that the change won’t appear on your personal student webpage until Registration Day (aka the day before classes). This was learned after submitting the form twice, once in July and once in August, and finally going into S^3 walk-in hours in a panic the Friday before classes started. It all ended up okay though. Whew.

6) Now that you’ve officially declared a primary major, you have to add on a secondary major using the double major form (which is probably more than twice as complicated as the single major form). For these forms, you have to fill out a detailed roadmap of when you completed or will complete all the course requirements for BOTH of your majors. I highly recommend using CourseRoad, which (although sometimes inaccurate with little class details or prerequisites) will be a super handy tool when planning any MIT undergraduate career. You don’t have to include things like GIR classes or classes that fulfill your HASS requirement and are not direct requirements for either major. Mine looked like this (minus some redacted information): 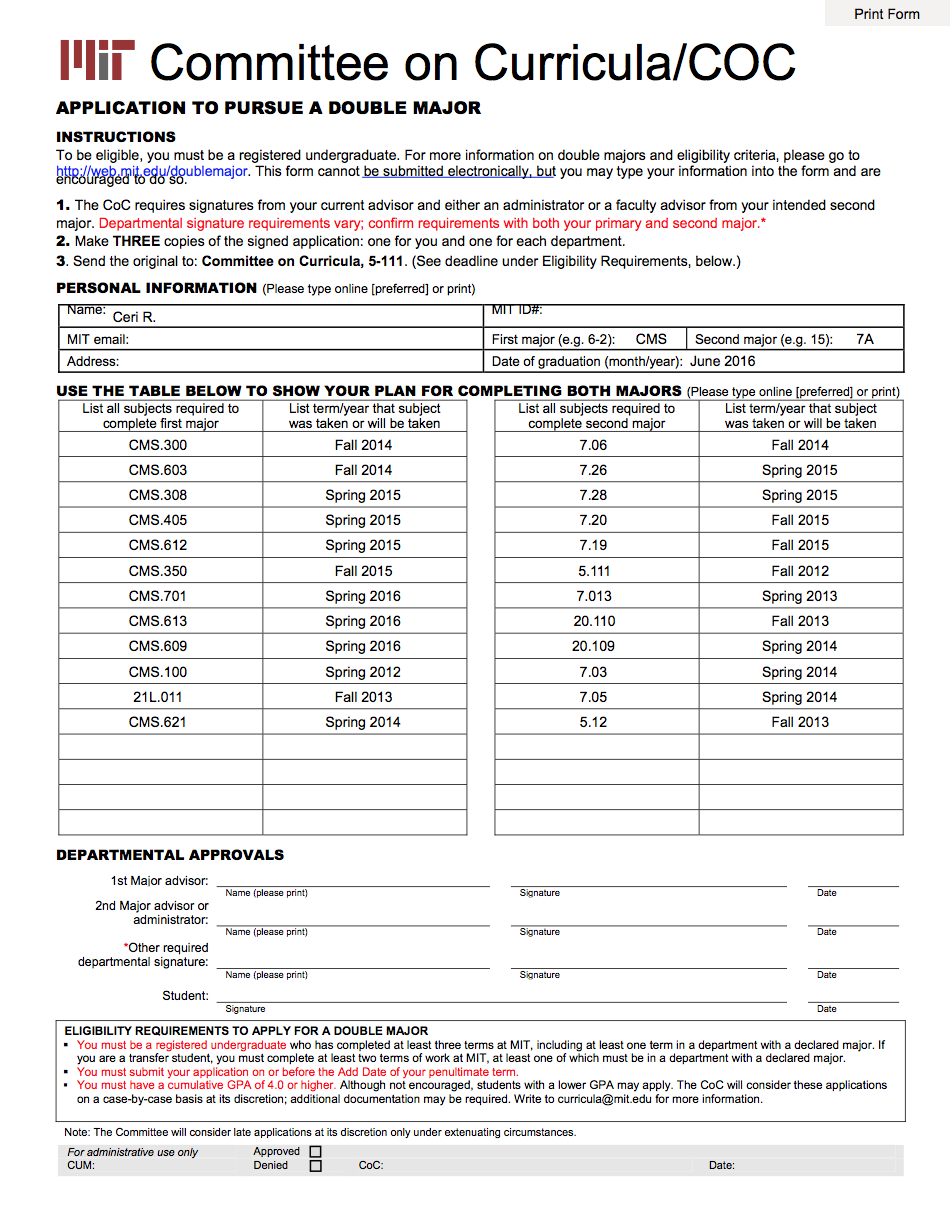 7) Get ALL THE SIGNATURES!

My name is Ceri R., and I’m a rising junior. Sophomore year I was majoring in Course 20, but recently switched to CMS as my primary major. However, I’m still interested in pursuing Biology by double majoring in 7A, as I already have many of the required classes completed and want to keep Biology open as a future option.

I’ve already filled out the double major form with what I think is a good plan for my next two years, but could I meet sometime next week with you to talk about adding 7A?

Thank you so much for your help, and I hope to hear from you soon!

7b) Meet with the Academic Administrator of your second department, and check with them that you have all the major requirements listed on your application form. Be excited (so much excitement!) and ask for their autograph signature.

7c) Then, meet with your advisor and (possibly) the Academic Administrator of your primary major. Explain how you’ve thought very carefully about pursuing a double major (which you have), and that you have a plan. Check with them that you have all the major requirements listed on your application form. More autographs! More fun!

Note: You can switch the order of steps a+b and c. This is just the order I met with them, given that it was right before the semester started and tons of meetings with advisors/administrators/etc. were being scheduled by all sorts of students.

8) Make a couple copies of this form (in case anything happens in the approval process and so you and both departments have a reference and proof that everyone signed it), and then turn in one to the Committee on Curricula (5-111). Double check that you have other necessary components, like a cumulative GPA of over 4.0.

9) Wait anxiously for them to approve your double major application. Prepare for the worst case scenario, where you may have forgotten information or they disapprove of your planning skills when it comes to future classes. (This is my current step.)

Bonus: Breathe a sigh of relief because this process is over/almost over, then realize that classes are almost starting and that you already feel behind.

Essentially, this process is comprised of a bunch of administrative hoops that you, an ambitious MIT student, must jump through in order to prove your worth. Or, in other words, it’s MIT’s way of ensuring that you want to double major because you care about both subjects and have the grades/work ethic/etc. to boot.

While it should take thought to decide to double major, know that this decision (like many regarding major declarations here) can be impermanent if you later change your mind and decide to focus in again on a single major. One of MIT’s great qualities is the freedom it gives all students to alter their courses of study, to play around in different majors and minors and HASS concentrations to figure out which strange combination of knowledge makes them the happiest and prepares them best for the next step in life. Sometimes people don’t even pursue the field explicitly stated on their degree.

Thankfully, for me, this terrifying next step in life is still around 2 years away. I still have plenty of growing and changing to do before (and, of course, after) then. But I’m definitely optimistic about this combination of majors, and think my remaining time at MIT will be much happier after having found a sufficient combination of my two passions.