I’ve always thought about doing crew and Taekwondo (TKD) in college. So at CPW, I visited the crew and TKD info booths, and during Orientation, put myself on their mailing lists. But seeing how i’m still evading the Swim Test…crew isn’t happening anytime soon. Luckily, the other half of the grand plan is moving fast on track. 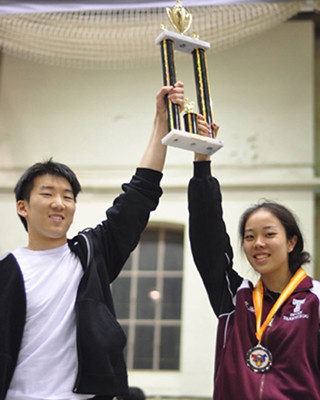 To catch up: 1st quarter at MIT, I took P.E. Taekwondo and loved it. Master Chuang (head Instructor of Sport TKD) brought so much energy to each class, it was hard not to be excited. After the class ended, I took a mini-break – only to return just in time for the ECTC Princeton tournament. MIT took second after Cornell. Princeton was like an Initiation for me: the skilled and unwavering competitors from all the schools withstanding rounds and rounds of forms and sparring convinced me to commit.

For the next four months, MIT Sports Taekwondo would train religiously, systematically, wholeheartedly. They say it isn’t about winning; but when the goal is so clear – “ECTC Division I Champions (again!) over perpetual rival Cornell” – stakes rise, and so does the pressure. After the early MIT and Princeton tournaments, MIT was 236 points behind the Big Red – with two tournaments left to go. To keep the grand Championship Cup in picture, we needed to win West Point resoundingly.

The opportunity came on March 7. At 4 AM (yes, that is A.M.)– 2 busses pulled up at 77 Mass. Ave., picking up 48 people. 40-or-so of which would wait in line for McDonald’s at 7 AM somewhere in the middle of New York state; I was part of the left-over ones who could not eat or drink anything before weigh-in at the tournament in order to make a certain weight class … so I razed through the PlayPlace. 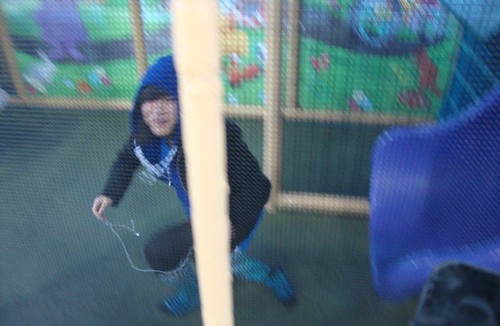 After 5 or so hours, we got to West Point. Besides MIT and Cornell in Division I, West Point also hosted SUNY Albany, Columbia, Harvard, Princeton, Tufts, and several more schools competing in Divisions II and III. In a typical tournament, Forms comes first. This is when all the competitors are divided by their belt levels, with each group lined up sitting around its own ring. Then, competitors go up on the mat to perform the World Taekwondo Federation form for their level in front of three judges. Personally, forms are hard to perfect, but nerves are even harder to conquer. It’s like playing in a piano recital – except people do notice when you mess up. That said, MIT snatched an impressive total of 17 –SEVENTEEN! – medals in Forms at West Point – 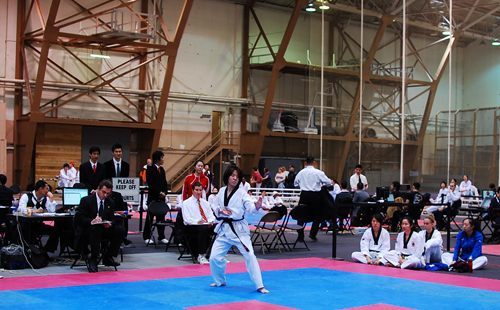 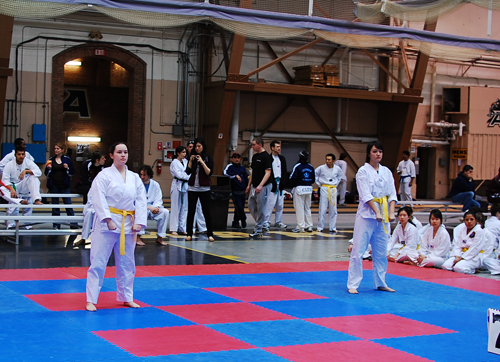 Once Forms finished, the real fighting began – aka Sparring.

Jason Uh ’10 in red (1st Dan Black Belt); his team A1 reached the quarterfinals in a tough bracket. 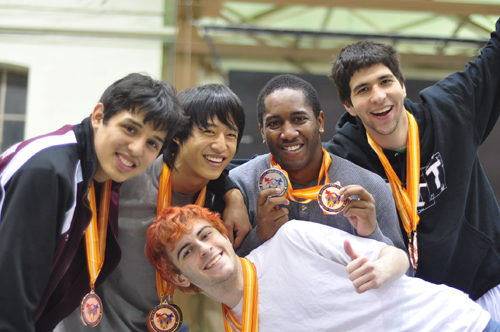 It always befuddles me to think about what makes someone “good” in Taekwondo. Should you kick hard? Often? Or just right? Obviously the answer is “Just Right”. But by now, I’ve learned that “just right” is pretty much only right when the judge scores a point for it. And with no baskets, holes, or lines to guide a judge in scoring, sparring is more or less subjective. Judges aside, how should you even begin improving in sparring? I try to memorize all the strategies and combination moves, but once on the real battlefield, I’m just running on instinct and praying to god that I can pull out something I recall learning. In this way, TKD is not really much different from say, basketball – where only practice and experience guide you to respond well in each individual circumstance.

At the end of the day, MIT won West Point – and in the most respectful way possible, it felt awesome to eat away Cornell’s point advantage. But we are still behind with one tournament to go (UPenn). So on most Monday, Wednesday, and Friday evenings – you will find me @ Dupont gym, kicking and learning from an incredibly tight-knit and hungry community that is MIT Sport TKD:

Congratulations MIT 2014!! Get all the juice out of CPW: begin finding out what you want to do, whether and how MIT can foster your pursuits; feel if MIT can become the place that’s “just right”.

To the seniors who are not/not yet MIT 2014: Walking around the rings at West Point, I saw so many “Almosts” – straightforward loss by 1-point, tie-breaker loss by 1-point, sudden-death-in-over-time loss by 1 point…Those single, critical points could easily be converted towards MIT’s point total – but they weren’t. We can sit around and wonder what could be done differently, but as the flashing final score lingers, there’s nothing left to do but smile, shake hands, and look forward to the next match. Memory of the previous battle may be painful, frustrating, or in the best-case-scenario, encouraging; but all these sensations ultimately build up the next stage for you to shine on. For everything that delivers an outcome – there’s a sense of finality. But if there’s anything to learn from Taekwondo, it’s that you can’t stand still and wait to be kicked. :]

21 responses to “Story of a Lifestyle”