Taking 3 math classes this semester by Jenny B. '25

as someone who isn't a fan of math 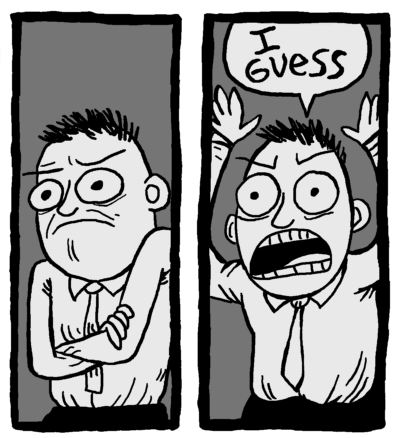 when people tell me that math is important in learning computer science (drawing by k.c. green)

I don’t hate math, but I’ve never particularly loved it either. Math always felt more like a necessity than something I could ever establish an interest in.

The weird thing is that I really like topics that are based in math, or at least involve a good amount of logic and reasoning. It’s satisfying to see things line up with a clear line of logic, y’know? But on the other hand, my feelings towards math itself is a lot rockier, swinging between begrudging acceptance and helpless despair until it averages out into a feeling of “meh.”

Despite this, I’ve decided to dedicate my undergraduate studies towards artificial intelligence, which means that I’m signing myself up for a ton of math. It’s understandable, since math is what you need to understand old systems and build new ones. If you think about it, math is how you get your WALL-E’s, your HAL-9000’s, and your Terminators.

I decided to knock out all three 6-4 math requirements this semester, breaking the record for the most number of math classes I’ve ever taken at once.

Elementary discrete mathematics for science and engineering, with a focus on mathematical tools and proof techniques useful in computer science. (Fall 2022 Course Catalog)

Formerly called 6.042,⁠01 Course 6 (EECS Department) got reworked in the past months, changing the numbers that Course 6 classes go by. which I call it by instead of the new number.

042’s been the hardest class I’m taking so far. I’ve never done proofs before, so even if I understand what a certain proof technique is and how it works, I’ve found it difficult to figure out how to use that technique to get to an answer. It’s been pretty stressful, not gonna lie.

Yet, I really like what I’m learning! I’m not great at it, but it’s interesting! The process of getting to an answer is grueling, but figuring out how to get to it is really satisfying. Additionally, I like the two professors teaching this term, so I’ve been making an effort to pay attention enough in lecture so I have a question to ask them after class.

I’m griping less about this class than I normally would is because I consistently meet up with my former roomie Nora, so psetting for this class doubles as a kind-of social activity and significantly less painful than psetting by myself, which was the mistake I consistently made last year.

I’m also making an effort to camp out in office hours more. I’m 500% more productive in OHs for some reason.

I don’t have a lot of feelings about this class, except that the professor brings his dog sometimes and she’s really cute. This is my first time learning linear algebra so the psets take a while for me to plow through because I have to get used to the sheer amount of matrices. I do like seeing how the funny little matrices change, like I’m some sort of matrix wizard.

Like 042, I feel like I would have a much harder time in this class if I didn’t pset with Nora and Stephen, a fellow 6-4 major I’ve met this year.

An introduction to probability theory, the modeling and analysis of probabilistic systems, and elements of statistical inference.

Back in elementary school, probability was always that one leftover subject crammed into the back of the math textbook that the teacher would have to rush through because they spent most of the year going over the arithmetic stuff. I didn’t really come in with the expectation to like 041.

The content’s really hard for me, but I’ve gained some appreciation towards probability that I wouldn’t have gained without taking the class. At the core of probability is uncertainty, and the field of probability came out of people finding ways to navigate uncertainty and making sense of it. There’s something beautiful about that, and it keeps me motivated to not give up on the assignments no matter how difficult they can be.

I share 041 with Stephen, so psetting for that class is so much better than doing it alone. I know I said almost the same thing three times, but psetting with friends I work well with has single-handedly saved my butt so many times in the past month.

I don’t know how to end this post, so I’ll leave three takeaways: