please take away my balls

My brain’s been on overdrive from the moment I stepped foot onto MIT, hopping from one event to the next, pset to pset, club to club.

Every summer, I’m usually a ball of anxious energy just waiting to be released. Potential so tightly strung that one little mishap could release it unto the world into one big energetic THWAP. And so I make myself busy over the summer — painting, drawing, gaming. Anything to keep the little string from getting wound up.

But now I find myself almost fully unwound. My string is everywhere, splayed out in front of me like…like…well, I was gonna say like guts in a murder scene, but maybe that’s a tad bit too graphic? Because, frankly, I like being busy. I like the full Google calendar. I like checking off tasks in my bullet journal. I like my string unwound.

Yet one of the downsides is that I’ve now gotten myself into the predicament of one of my favorite advertisement slogans: WAY too much stuff??? And NOT ENOUGH SPACE??? IT’S OVERWHELMING!!!

Unfortunately, I don’t have Space Bags to help me clean up this mess.

Yes. Who would’ve thought that an excitable, little frosh would have done this to herself?

I entered MIT with a job, a web-based research intern for Massachusetts Science and Engineering Fair. I essentially design social media posts and do some ~research~ like things for MSEF and it’s very therapeutic. One ball. This is fine.

Then, in some wave of magical powers, I got this job. I still remember opening this dandy little e-mail from Petey, and I excitedly turned to my friend in DPD saying “Oh my God, I’m a blogger.” Two balls. I’m glad I’m a bit busier.

Poker club.⁠01 Fun fact: I won AirPods at the poker club poker night. It was super duper fun seeing as I literally just learned how to play poker that day. Shout out to poker club. Does this even count as a fourth ball? It’s so fun.

But then I had old projects from home I was still continuing. Fifth ball.

And another organization. Sixth.

And a UROP. Seventh.

I look at my bullet journal and it’s a swarm of color and a messy array of checkboxes in between urgent reminders to please for god’s sake do your psets you dirty gremlin child. 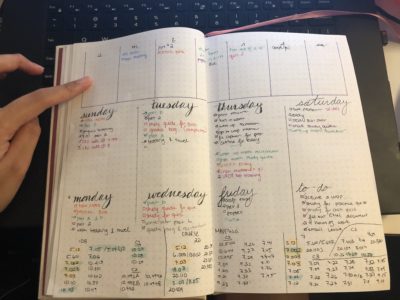 My sunday-saturday schedule ft. me having a major crisis [literally…that’s a future blogpost]

Of course, my friends urged me to drop things because I was taking on far too much than I could handle and it became a game of “So what do you love the least?”, like asking to pick a favorite pet or fruit. It was just too difficult.

Then came the dread of realizing that I had to drop a ball. Drop the ball. Give up. Concede. Admit defeat. Look someone in the eye and basically tell them “I don’t have enough time for you, sorry! Adios!” and be on my merry way.⁠02 No, it's not actually like this at all. This is my anxiety and self-consciousness speaking.

To me, dropping the ball was failure, stating that I wasn’t good enough to complete what I said I could. It was going back on my word.

It took me…..longer than I’d like to admit to push through the mess of responsibilities and ordeals I’d gotten myself into. I spent nights just staring at my to-do list wondering if I’d always feel this busy, and if I really did like it.

Because I do. Even with all the balls I’m juggling, I’m enjoying everything I’m putting my time into. I’ve been given so many opportunities never offered to me before.

But at the same time, I realized that in the midst of my busyness, I had began to sacrifice the Cami things that made me happy. I stopped listening to single releases from my favorite artists the day they came out and instead found myself finding them 2 to 3 weeks later. I stopped watching David Dobrik vlogs the day they came out. I skipped out on fun midnight trips to iHop or spontaneous Random roofdeck shenanigans. I was missing out.

And while FOMO is an entirely other blogpost altogether, I found myself lost in my work and losing touch with the quirks and hobbies that made myself me. My permanent state was a state of stress, jumping from one task to another and yet it still didn’t feel like enough. Not enough work hours, not enough studying, not enough communication. No matter what I did, I wasn’t enough. I began neglecting my health, staying up late when I knew I needed to sleep and waking up far too early. I’ve been coughing for the past three weeks and haven’t looked into it even though it is definitely not normal to cough that much. I wasn’t giving myself enough attention, and it was taking a toll.

So I did what I had to. I dropped a ball. I wrote up a text, panicked about it for 10 minutes while showing it to my three friends asking them to read over it and make sure it sounds nice and kind, and sent it. One ball dropped.

It’s not much, but it’s a start. I’ve capped myself at where I am. No more time commitments, no more spreading myself too thin. I’m slowly learning to manage my time and know when to stop working. At one o’clock, no matter the class or organization, it’s time to go to bed. I’ve started prioritizing going to the gym, sleeping more, being with my friends.

I think I’m slowly starting to learn how to quiet the small voice in my head that says “You’re not doing enough” and instead telling myself that I’m doing my best.

Obviously the process isn’t as simple as just whispering some things to the little person inside of your head and magically you’re cured, but I think I’m getting to a point where I’m content with the amount of effort I’m doing.

In a quick moment of psychoanalysis, I know I’m definitely not the only frosh (or person) falling victim to this routine busyness. I drowned myself in work, whether it be my jobs, my academics, or my clubs, to try and stave off that imposter syndrome I’ve been feeling for the past couple of weeks. I thought that maybe if I threw myself into every activity out there, then I’m making good use of my time at MIT and it would prove that I’m meant to be here. That I can make a positive impact on the community no matter how hard I’m struggling.

But, of course, in my efforts to “prove” something, I let that nearly ruin my college experience with too many responsibilities.

I guess what I’m trying to say is that if you’re looking for a sign to drop a ball, here’s your sign. It’s okay to drop a task. It’s okay to feel overwhelmed. It’s okay to call it a night and just head to bed instead of finishing one more question.

Now I will leave off with some of my favorite quotes from my friends about juggling freshman responsibilities.

My balls…I have so many balls. I have volleyball–I have a concussion still I can’t even PLAY volleyball.

Emma, sobbing at like..12:30 AM during a calm, peaceful pset night

Raymond, after realizing he has 3 psets due on M/T and he spent his Saturday night doing Nothing.

I’m calm anxiety. Like, my whole life is falling apart right in front of my eyes and I kinda just sit back and go ‘Well, f*ck.’

Aiden, when we were describing what kind of anxious energy we each give off⁠03 For the record: I'm angry anxious energy. When I'm anxious I just swear and groan a lot. Caroline is just pure anxiety and indecisiveness. Tag yourself.

You know what triaging is? Sometimes you just don’t want to invest too much time and resources into someone that probably won’t make it, so you have to assign degrees of importance. Drop the ball. Stop taking on so many balls.

Aidan, probably the only sensible one in my entire friend group.

Cami, after realizing she doesn’t want to put in any more effort into her HASS essay.