Last spring, I took CMS.614, Network Cultures, taught by Petey. It’s one of my favorite classes I’ve ever taken at MIT (even though I had to drop it 3/4ths of the way through the semester). One of the assignments for that class was to  “Make An Agent.”

For this project, you must make, and write about, a sociotechnical artifact — whether this is a bot, a tool, or a visualization of some dataset.

We had the choice to make either some social bot, tool, or dataset + visualization for the project. I opted for a dataset + viz.

The semester prior (Fall 2021), I had dormspammed⁠01 To send an email out to all of the dorm mailing lists on campus a survey asking people their favorite and least favorite places to shit on campus.

The survey the bathroom’s location and gender, and also asked submitters to rate the following attributes on a scale of 1-5:

I also asked if there were a full mirror in the bathroom and any comments they may have.

I kept the survey open for about three days and I received about 81 responses.

I manually added each submission’s latitudes and longitudes and added it into the data so I could easily put them into the interactive map.

Once I gathered those results, I separated them into “favorites” and “least favorites” and downloaded them into their respective .csv files and created a script to parse out the data into a JSON format. (The script was aptly called “poop_parser.py”.)

Originally, the website was built using the Google Maps API, but Google recently started charging to use their API so I switched to a free alternative, OpenStreetMap, using react-leaflet, a Javascript React library for interactive maps.

Then, I took each entry in the list, grouped them by common location, and averaged the results and entered them into the map to create my poop map!

You can find my Poop Map here, hosted on Netlify. I didn’t bother buying a custom domain for it since, well, it’s not that serious. 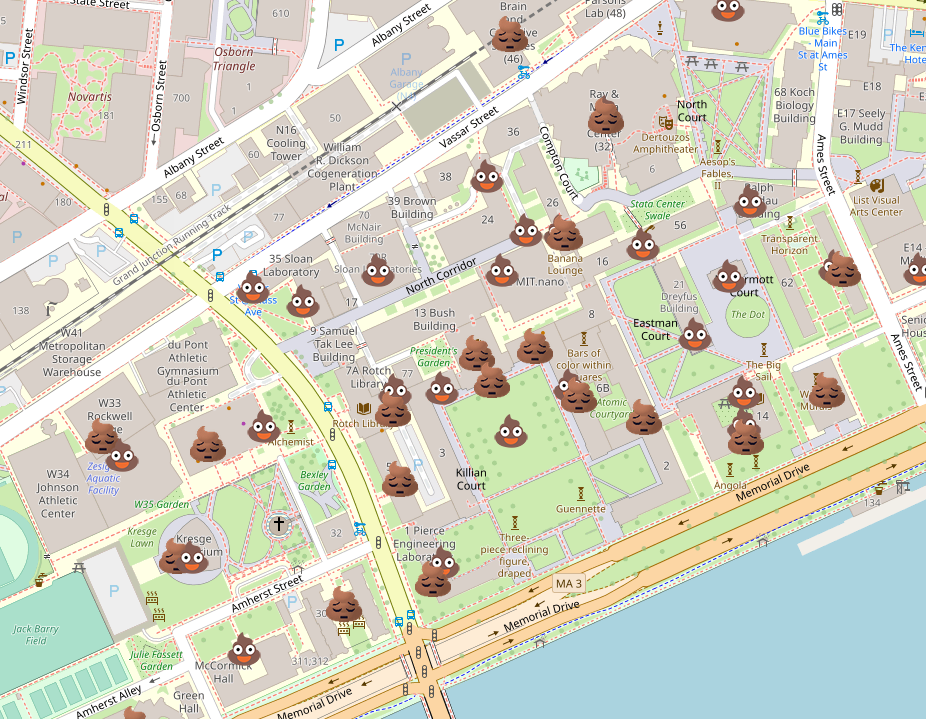 Through this map, you can click on the little poops to see people’s responses. Happy poops indicate people’s favorites and sad poops are people’s least favorites. At the top of each poop entry is the averaged ratings and if you scroll you can find the individual ones.

This was kind of just a fun throwaway project I did to learn React and Typescript better, so it’s definitely not the most sophisticated. If I were to continue with this project, I’d probably look into a database of some kind (maybe I can finally learn Firebase) so people can submit updates to their favorite bathrooms. This would be done through some Touchstone verification (ensuring they’re an MIT student) to prevent spam. I would also probably add some way to filter bathrooms based on gender or rating and things like that. If you’re interested in looking at the code, you can find the GitHub repo here.