Published exactly 4 weeks after the first day of classes. My bad.

Like Allan, I’m obsessed with taking notes. I’m also obsessed with handwriting. In sixth grade, Megan P. sat next to me in science class and had THE MOST BEAUTIFUL HANDWRITING I HAD EVER SEEN. Each letter was very tall and narrow, and she curled the ends of her letters so that each word looked flowery and beautiful. So, I painstakingly copied her handwriting. At some point, my letters morphed into their current form – my penmanship now bear little resemblance to Megan’s. And I can write much more quickly (she was slow.)

Having handwriting that you enjoy looking at is a huge plus. When studying for exams, it’s NOT agony to flip through my old class notebooks. I’ve also found that it’s a lot more fun when there are comments written in the margins and funny quotes from the professor. So, in my lecture notes, there is a mixture of 1) abbreviated content (normal notes), 2) direct quotes, and 3) my own comments. (3) can range from questions that pop into my head that I want to ask the professor after class, to an observation that the professor is wearing funny clothes, to the fact that the kid in front of me is taking notes rapidly in LaTeX and it’s making me feel bad about myself. So that I don’t confuse (3) with (1), I write // in front of (3) — those of you familiar with Java programming might understand why.

On the first day of classes, I had Intro to Biology lecture (lecturer: Eric Lander) and Relativity lecture (lecturer: Peter Fisher). Both professors elected to spend the bulk of lecture outlining the class and providing motivation for learning the material (Peter Fisher actually outlined all of the MIT Physics undergraduate academic program). This makes my life as a window into the MITverse easier, because then I can let my Day 1 Lecture Notes stand in place of a blog post describing those two classes. For some reason, it took me 28 days to take my notebook to a scanner, though; sorry about that. 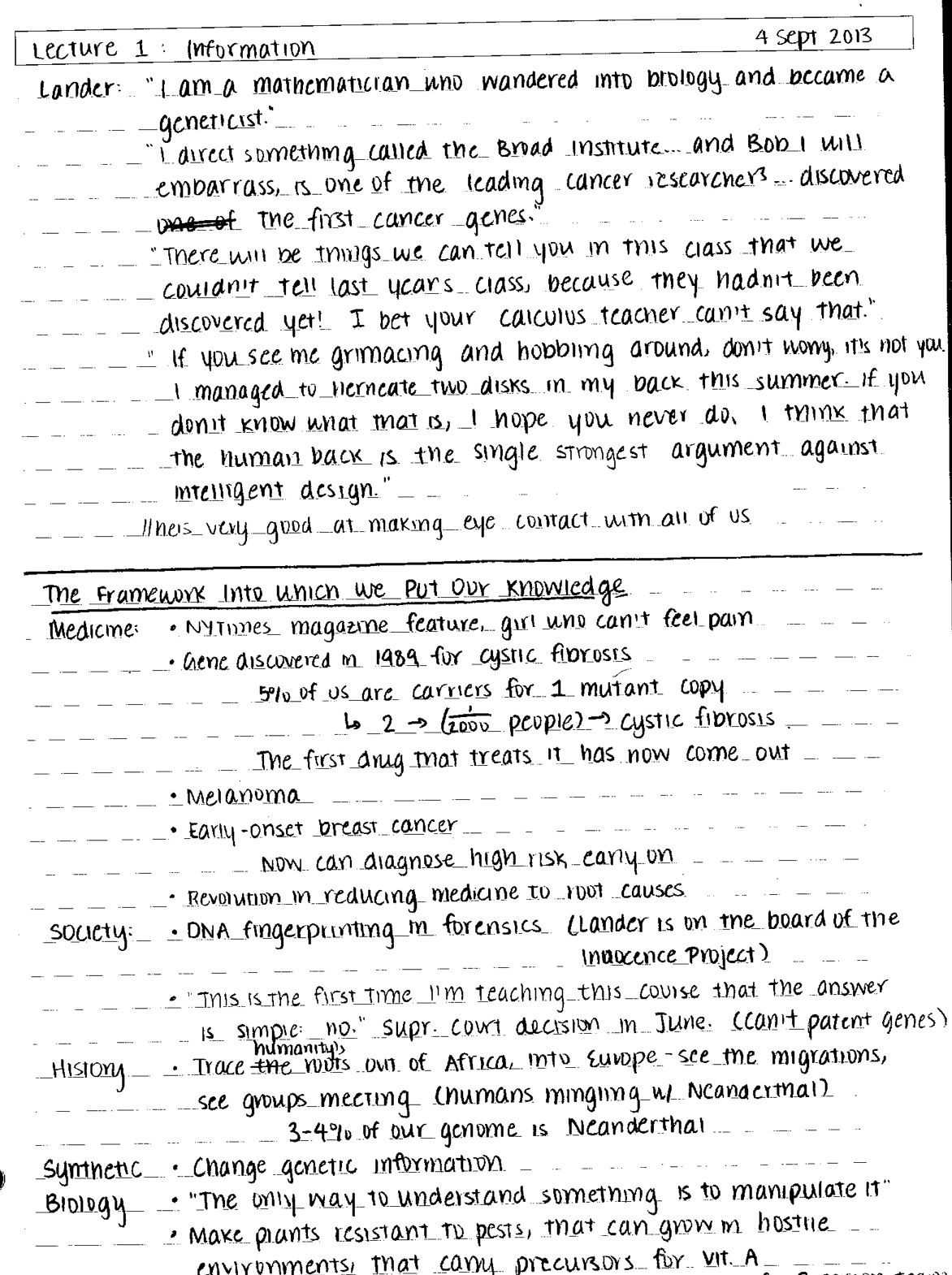 // When Lander says that he is a mathematician, he means that he took 2 years to get a Ph.D. in pure theoretical mathematics (from Oxford, on a Rhodes scholarship) and has never in his entire life taken an Intro to Biology class. He also means that he was on the American Mathematics Olympiad team in 1974, in its inaugural year of participation. His team placed second. More on his life story here

//”Bob” is Bob Weinberg, the other 7.012 lecturer (he was in the audience for the first lecture.) 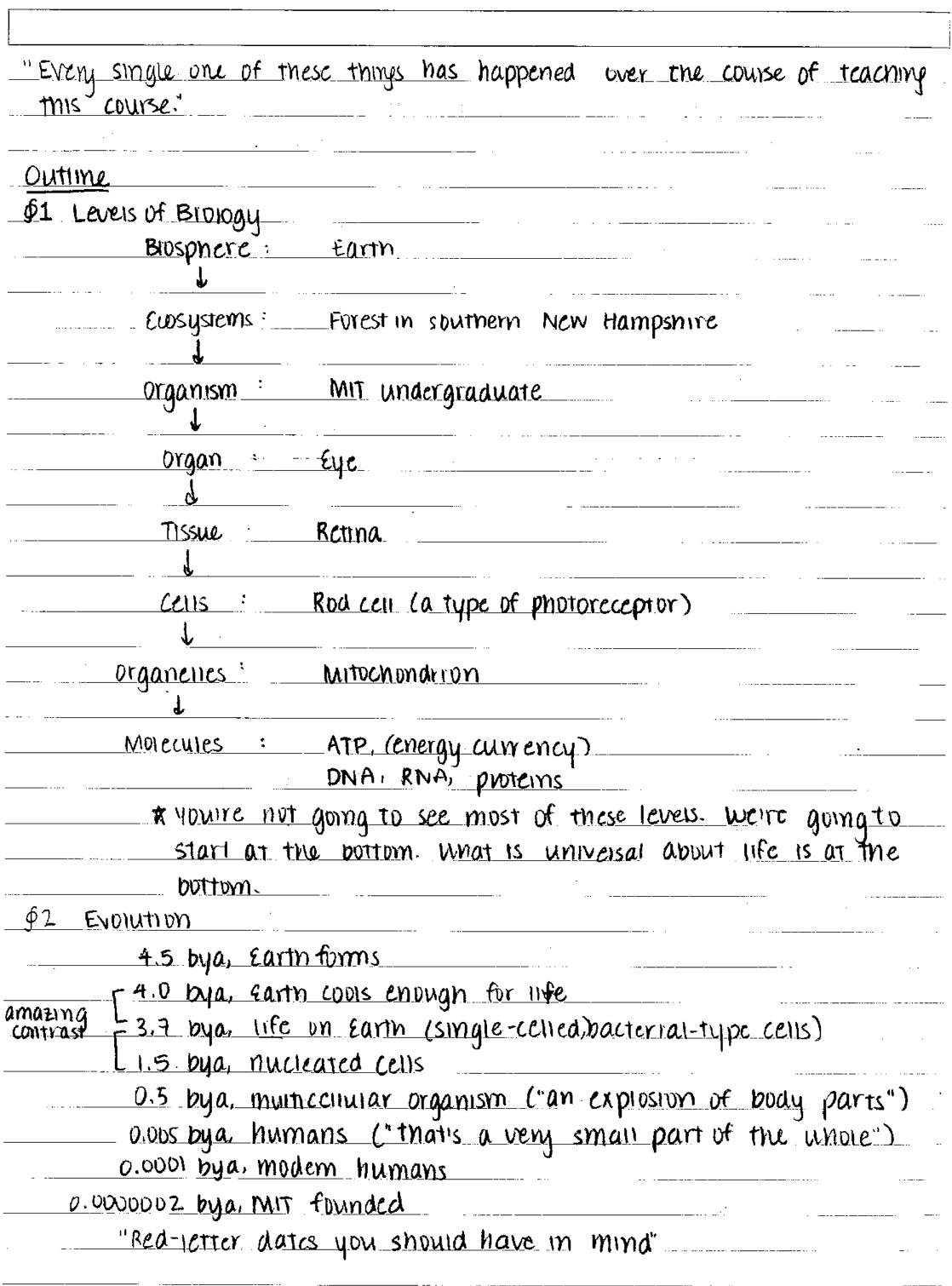 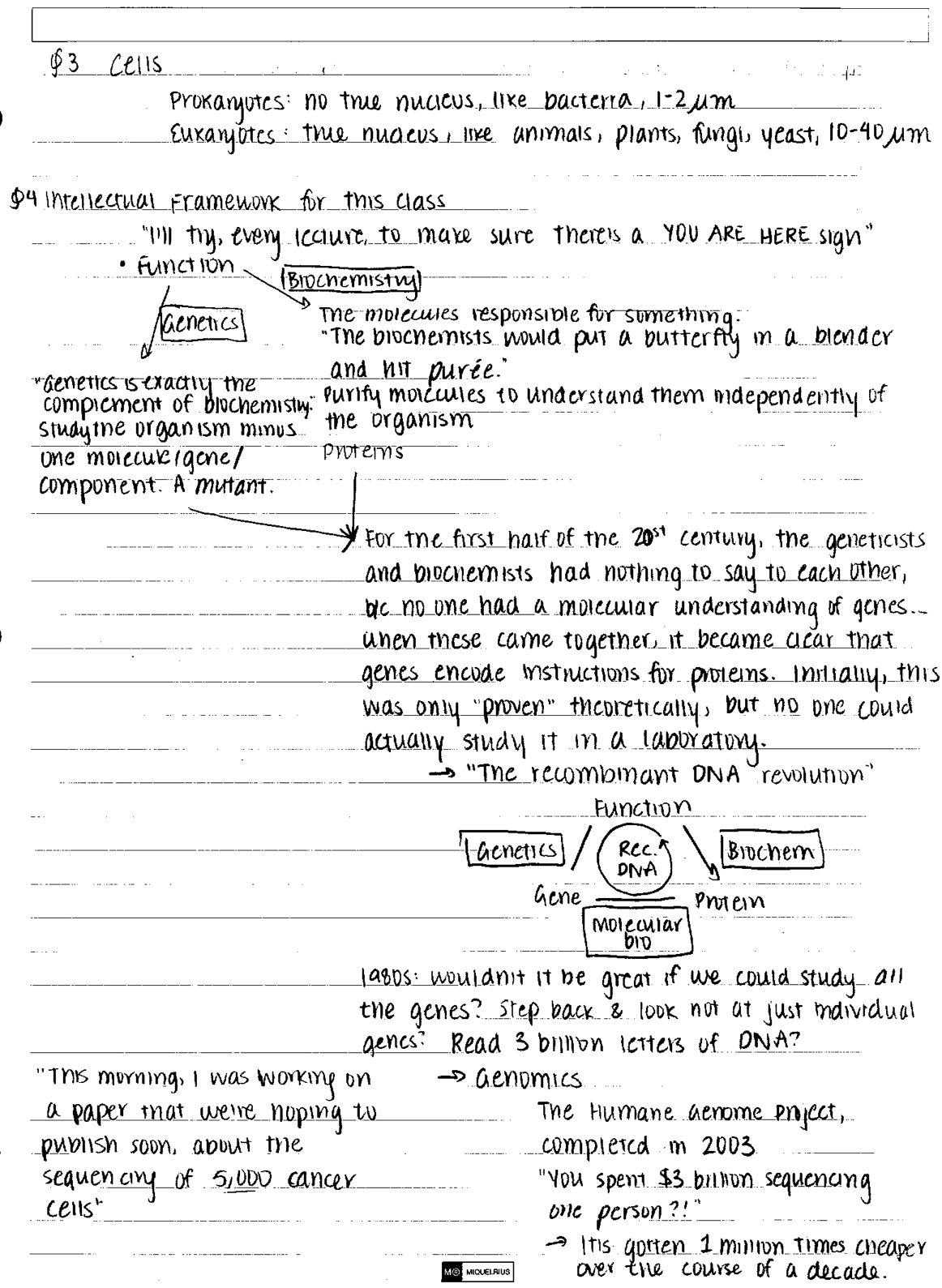 And then, what I thought was a bizarrely anticlimactic finale to Day 1 of Eric Lander’s legendary 7.012 course:

Before I show you the notes, it’s worth mentioning that I’ve had Peter Fisher as a professor twice now: first for 8.022, then for 8.223. He’s a character. 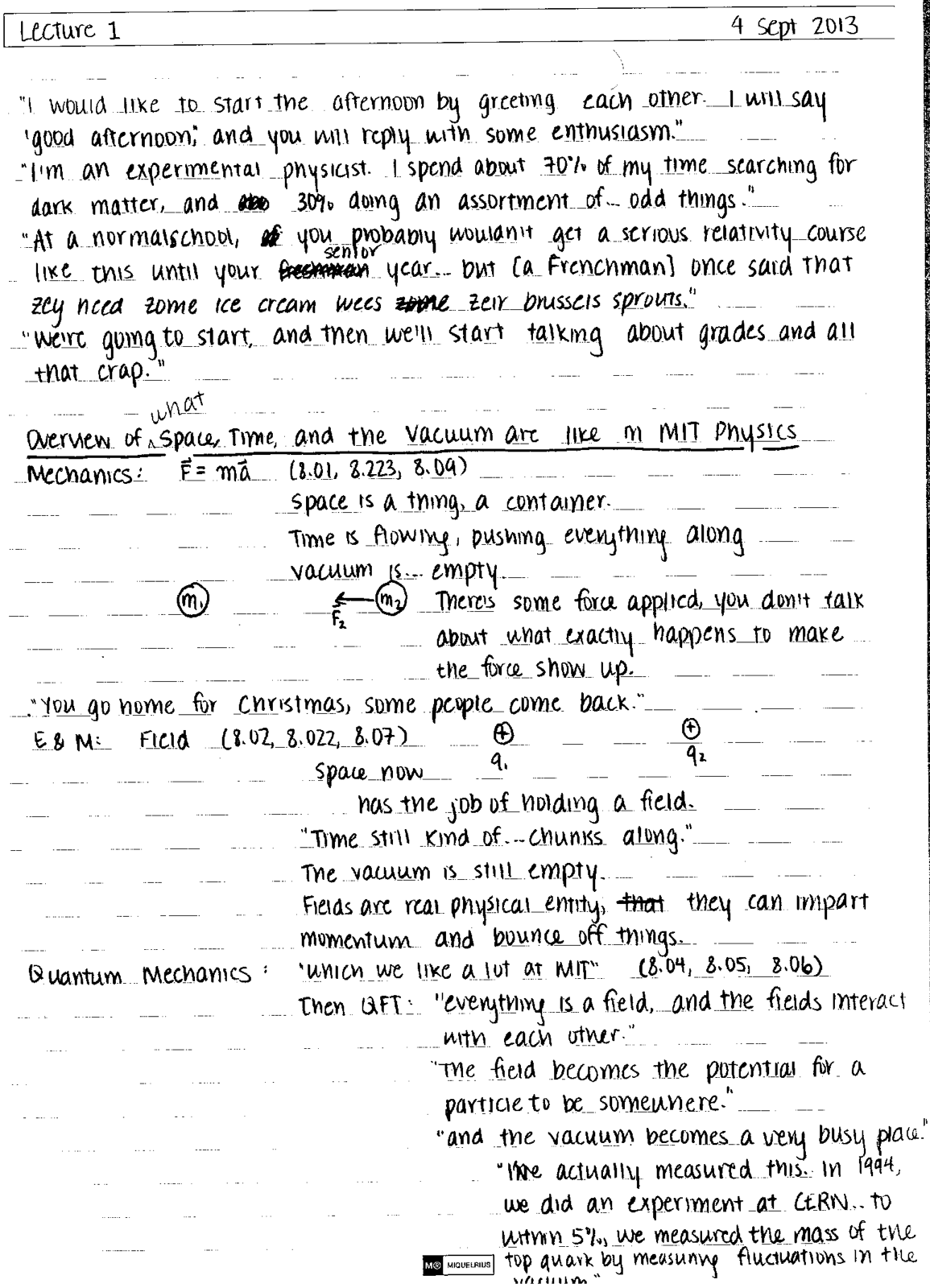 // that’s supposed to say vacuum at the bottom 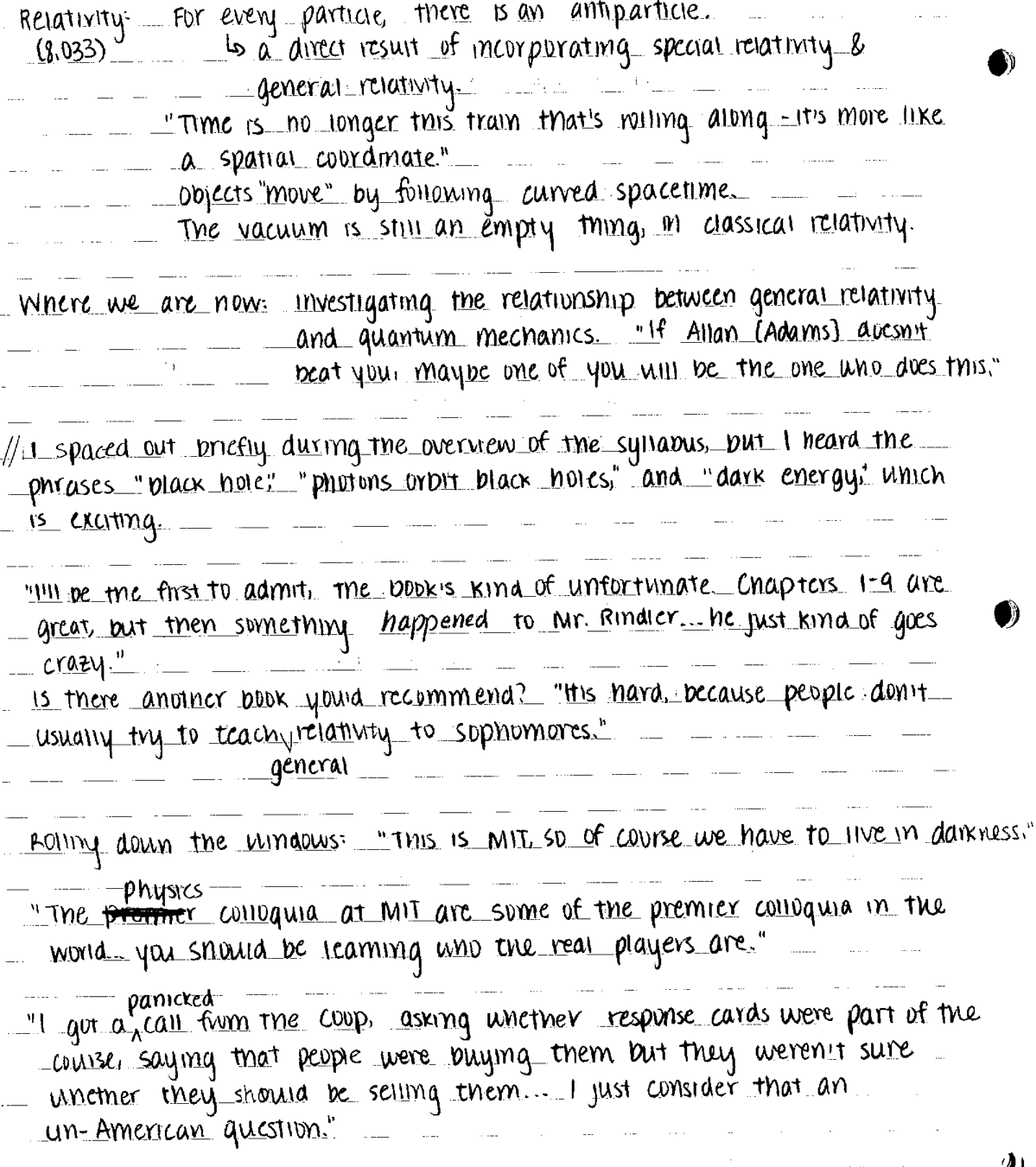 // Allan Adams is a string theorist at MIT, glider pilot, legendary lecturer for 8.04, and a recitation instructor for this relativity class. More on him later in this post.

// “response cards” are these little remote control things that we use to answer questions interactively during lecture. The lecturer is then able to see what percentage of people keyed in what response.

// the Coop is the MIT bookstore.

// I didn’t realize how much jargon was in these notes until I posted them.

Now, big lecture hall classes at MIT are broken up into recitation sections. A few times a week, we meet as a whole class for lecture, and the main lecturer gets up and talks at us for 1-1.5 hours. On the days we don’t have lecture, we have recitation instead: a class of 15-20 people, to discuss problems in more detail and resolve whatever confusions we have. Recitations are conducted by TAs: in the physics department (MIT PHYSICS <3) recitations are always conducted by a professor. This is not the case in any other department, as far as I’m aware.

I have the great fortune of having Allan Adams is my recitation instructor. Notes from Day 1: 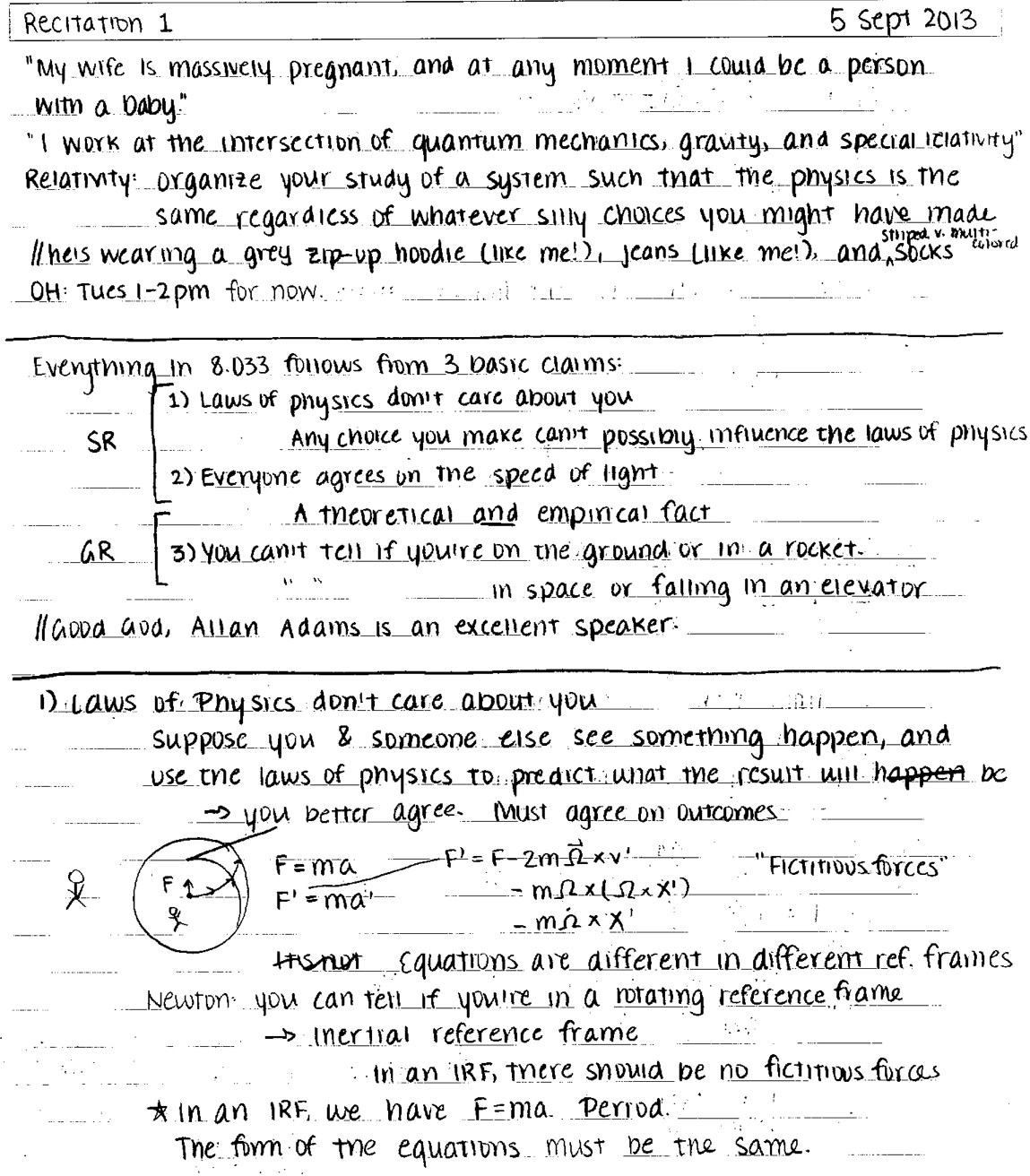 // These notes are outdated: Allan Adams is, in fact, now a person with an adorable baby named Arthur :)