note: This is a personal account on my experience with anxiety and is not a substitute for professional advice.

I know I usually post more lighthearted content, but this is a topic that means a lot to me to talk about and has affected me for a while.

My mental health took a bad hit at the start of January. The anxiety that made 2021 a hellish year for me got buried under the structure and responsibilities of the fall semester, only to be unearthed again over IAP.⁠01 Independent Activities Period, which runs throughout the month of January

This isn’t the occasional anxiety you receive from normal events, like an important exam or a first date. It’s this persistent worry that something is going to go wrong, no matter how unlikely or disproportionate to the situation it is, no matter what you do to circumvent it.

It’s a combination of many things.

I first started a draft back in September about my anxiety problems. I was trying to think of them in a positive light, which reflected in the list of jokes and metaphors I created to help explain what it feels like to me. There’s the whole “Anxiety is actually a good thing because it helped your caveman ancestors avoid threats and survive!” narrative that I was obsessed with for at least five drafts. This is now my fifteenth draft.

It took a near emotional meltdown in front of Logan International Airport to get me to realize that, by trying to mold my anxiety into this lighthearted thing, I was avoiding the harm it was dealing on both my mental and physical wellbeing. So I scrapped all of the memes and jokes I made about my anxiety because the situation wasn’t funny anymore.

I’ve started to acknowledge the similarities between my anxiety now and my depression back from seventh to tenth grade. I was reluctant to admit them. I was too proud about healing from my depression to accept that I’m mentally ill again, but reflecting on these similarities has helped me pinpoint some attributes that I’m struggling with.

Notably, the fear of the future is all too familiar. The fear feels different this time though: I don’t think of the future as this place devoid of good things, but now I feel like there’s too much stuff in the future, all of which can hurt me. In this distorted vision, the future is this place where we have zero control over what can happen to us, and all of its inevitable pain is hurtling towards us at frightening speed.

It’s possible that my anxiety is the product of being at a transitional stage between high school and college, all while in the midst of a world still dealing with COVID. Either way, it fundamentally boils down to the same conclusion I made back then, which is that the future seems like a miserable place that I won’t thrive in. 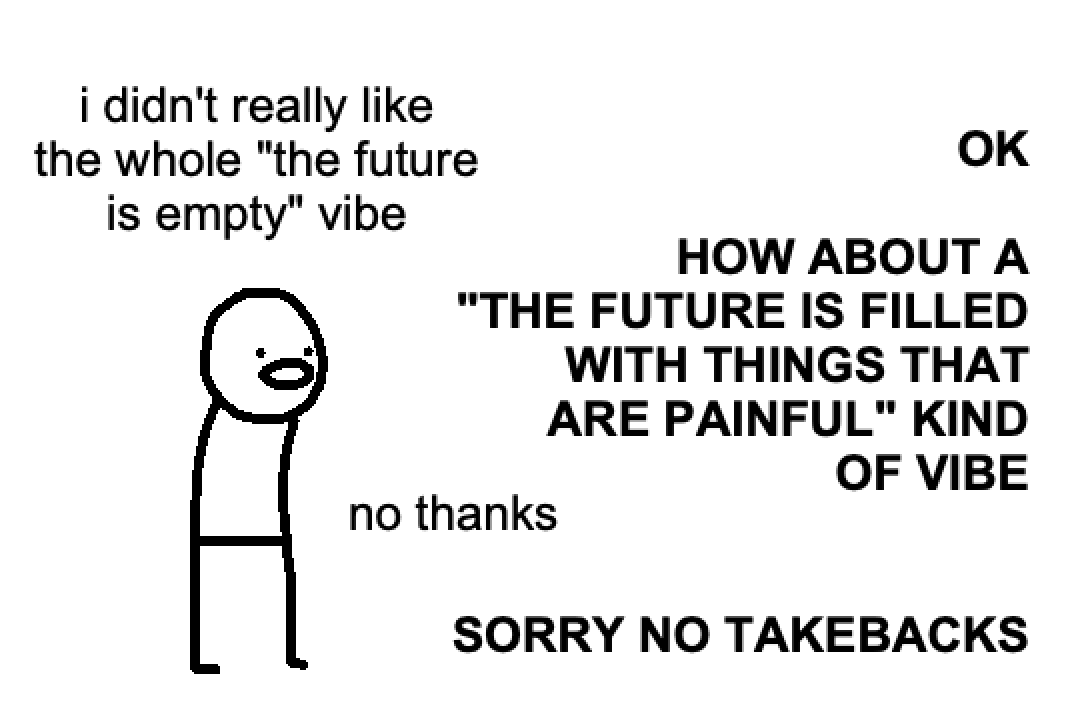 I logically know what I need to do to not feel anxious. I know that there’s no perceivable threat, and really the best I can do is to just take things one by one and not worry about the outcome.

But it’s the visceral sensations of anxiety—and the inability to control the fight-or-flight response despite knowing that it’s all irrational—that make it all the more terrifying. The lack of control. It’s like there’s a severed connection between the rational mind and the instinctual signals of the body that prevents both parties from behaving appropriately to the situation at hand. This dissonance creates problems, both mentally and physically, and it warps my perception of the future into a terrifying one.

So I try to pick apart what is going on with me, but I’ve very recently started to implement forgiveness towards myself in this process. Sometimes I forget to forgive myself. It sucks, but it happens.

When I forget, I feel ashamed to be anxious, because it makes me feel like I’m not trying hard enough to make myself better. But why should I feel apologetic? When I broke my arm in seventh grade after trying to ride a skateboard, I wasn’t angry at myself for not healing faster. Nobody thought that I was messed up and irreparable. Something happened that led to me breaking my arm, I sought the right professional care, I was patient with the healing process, and then my arm got better. I shouldn’t really see therapy any differently.

Besides, the sensations I felt for the first three weeks of IAP were very much real. The doctor at my urgent care visit told me that anxiety can produce the knot-in-stomach feelings I get when it gets bad in response to these imaginary threats my brain conceives. It’s called the gut-brain connection. It also explains why I’ve been too restless to get enough sleep, or the shaky feelings and heart palpitations that disappear as soon as I distract myself.

I learned that managing anxiety isn’t as simple as turning off a switch in the mind because it can manifest itself outside of the brain into other physical sensations. As I said, the lack of control over myself is what makes this terrifying for me.

I’ve had experiences where I was so tense that I couldn’t help but to admit to people that I felt scared for no solid reason. I wouldn’t know how to respond when they asked me why, so I’d say something along the lines of, “I don’t know” or “It’s nothing.” You don’t just tell people that there’s this weight of unexplainable dread that appears throughout the day. 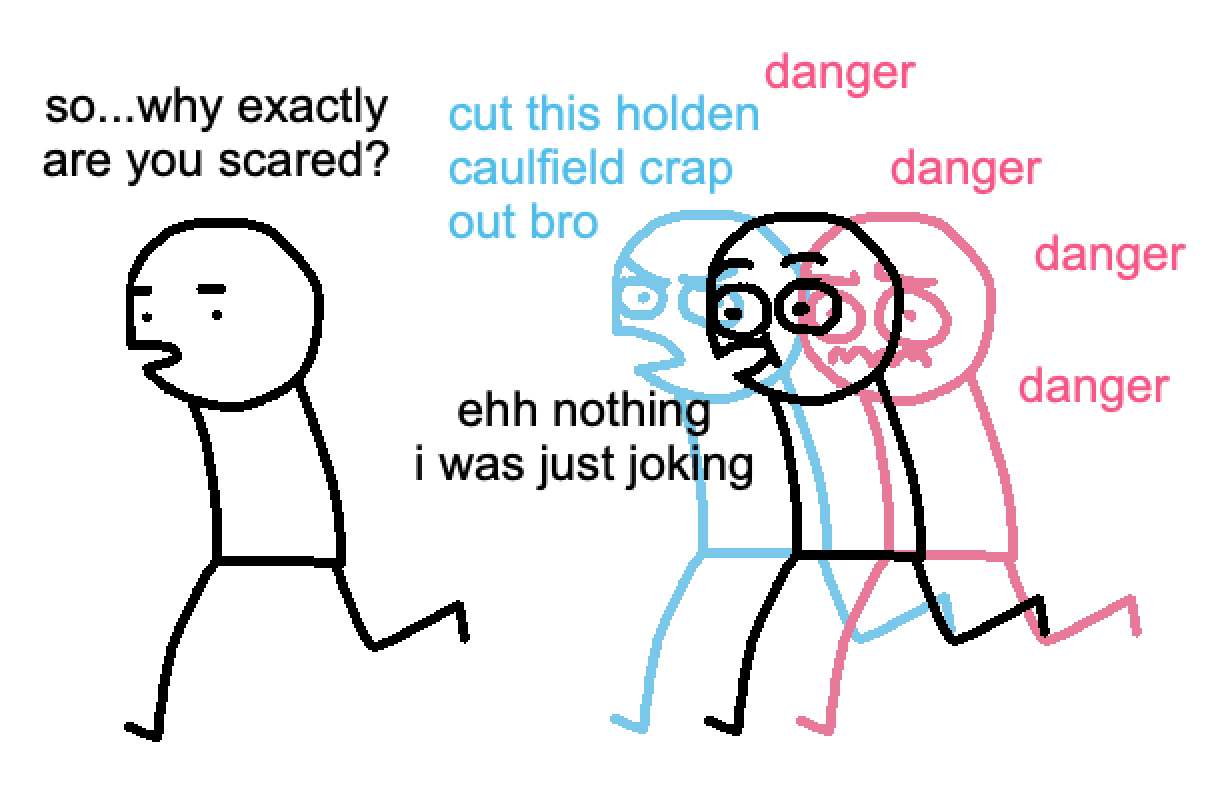 But if I’m scared of nothing like I say I am, why does the fear make it hard to breathe? Why does it feel like someone is squeezing my stomach in their fist? Why can’t I get out of bed in the morning or go to sleep at night without twisting and turning around enough? I want to say that the future scares me. But how can I be scared of something that doesn’t exist yet, or something that will never exist?

When I sink into another panic attack, I feel like I’m going insane. It’s dehumanizing, even. When the mind and body are no longer in sync with each other, and when I realize that the future isn’t the answer and never will be the answer I need to these frightening questions, I can’t help but to hate being trapped in this body. I forget to forgive myself and allow myself to move on, and that makes it worse.

Two people that helped me feel more comfortable about my anxiety (as comfortable as you can get with it, at least) were my therapist and the doctor I met at urgent care.

I realized that the kind of thoughts that don’t really help me are things like, “Don’t panic. You have no reason to panic. Neither do dismissive thoughts like, “Just be happy! It’s easy!” which I think people often misattribute as positive thoughts. Positive thinking can help reinforce and remind ourselves of what’s worth appreciating. Dismissive thinking doesn’t. 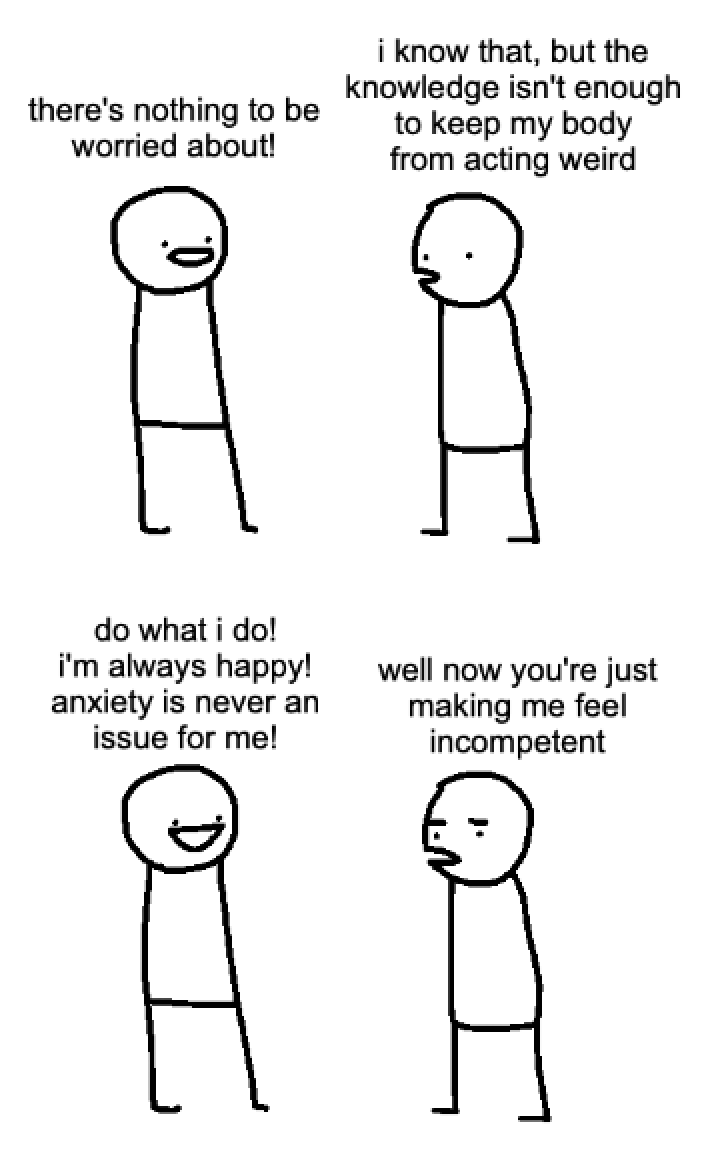 Like what my therapist tells me, I remind myself to breathe. Sometimes I get a meditation video out to help me accept the negative thoughts and gently release them, rather than aggressively forcing them down. I try to remind myself that I don’t need to rush myself through these anxious phases because they’ll eventually pass. All I need to prioritize in that moment is to look after myself.

It’s so much easier saying this out loud than actually doing them, though. Progress is hard. It’s hard to even tell if you’re making progress because, at the micro-level, it’s a series of successes and setbacks. It’s not a consistent trend up.

After being holed up in my room for the majority of IAP, I got myself to walk around again last week. It wasn’t perfect, but it wasn’t completely bad. It even had its good moments.

Did I get rid of my anxiety? Not necessarily. But the most noticeable change is that I expanded my threshold from my room all the way to the Cambridge Public Library. That’s still progress. It’s not constant progress, but at least I found pockets of time where things seemed bearable after all.

And I was fortunate enough to find a therapist who worked out. Therapy isn’t a cure to my anxiety, but it’s given me a toolbox of tips and strategies for how to deal with it. Sometimes I don’t know how to use a tool, or I’ll even forget that I have a toolbox in the first place. Part of the process I think is becoming well-equipped and not beating myself up over it for not knowing how to utilize these tools from the start.

I can’t always be in control, but I can find what I can control and find solace in them. 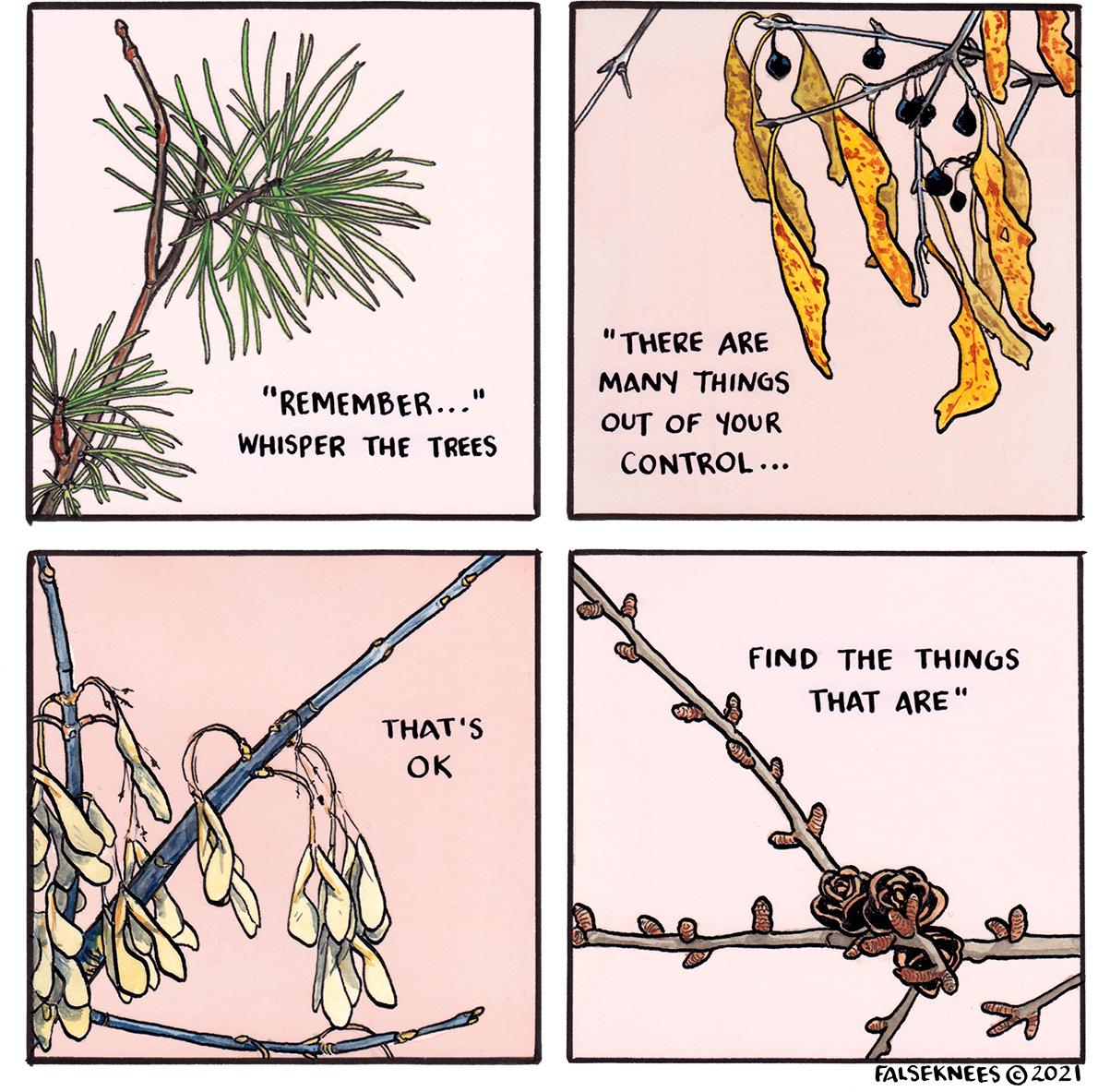