The most beautiful class schedule by Michelle G. '18

I feel sooo motivated today. You know that feeling when you’re just starting out your semester or school year or whatever and you keep telling yourself that you’re positive this is the semester where you’re going to focus, work hard, and do amazingly well? But then maybe you feel compelled to access your rational, “outside view” shoulder-devil to remember the times you’ve lost your optimism as the semester has unfolded.. to try and predict that those late nights you’ll be up doing work till 4 a.m. will likely demoralize you until your stash of motivation is entirely depleted and you fall asleep in your chair, or at least get pretty sad and decide “never mind” on the whole “do amazingly well” thing. And then you ask, is this semester any different? Or is there any good reason it might be?

Last semester it was “no” for me, but this semester it’s “yes, I am totally positive.” When I registered for classes in the fall (last) semester, I was actually told that the subjects I was taking were known for being particularly dry and boring and was advised to read Econ-related material on the side in order to “not lose interest in economics.” Personally I like to read, so this was okay. I like reading about Economics beyond the “dry” introductory classes I was taking last semester, and I also like reading about various political philosophies. In the past I’ve been a junkie for the kinds of dusty old works of revolutionary politics that continue to organize small modern factions of alternative thought, not necessarily because I subscribe to the beliefs, but because I think they’re interesting and fun and worth thinking about. I like psychology stuff, specifically as it relates to the meaning of “subjective wellbeing” and what kinds of ways it’s plausible to organize people in. The book “Governing the Commons” made me think about institutions, and “Why Nations Fail” made me think about the nature of them. I ended up reading like 20 books last semester, and I think I’ve learned a solid amount from that, including how much I don’t know and what I really, really want to learn.

So then, I guess the reason I am so motivated for this semester is because many of those demoralizing sleepless nights from last semester were a result of me procrastinating by better defining my *actual* interests, which I will really pursue academically starting now. If you asked me at this moment about what my aspiration is in life, I would tell you (broadly) that I think I want to engineer and implement institutions to provide people within them the mechanisms and incentives to maximize their utilitarian benefit or subjective wellbeing. I imagine (based on my present understanding of “subjective wellbeing”) that this type of institution would combine pro-social elements with individual incentives towards achievement and productivity. In particular, I’m interested in the idea that firms – at least in certain industries – can be reimagined or improved to this end, though I feel I don’t yet have the knowledge or conceptual tools I would need to do it in a satisfying way..

..which is okay! Because, fortuitously, all of the four elective classes I registered for this semester are in some way relevant to institutional design, as well as just being generally super interesting. There are six classes in total, but the load isn’t very intense or technical, so I am pretty confident I can stick with all of them. They are:

“Uses the tools of macroeconomics to investigate various macroeconomic issues in depth. Topics range from economic growth and inequality in the long run to economic stability and financial crises in the short run. Surveys many economic models used today. Requires a substantial research paper on the economics of long-run economic growth.”

“Analyzes the behavior and performance of firms in markets, with a particular focus on strategic interactions. Topics include monopoly power, behavior of firms in oligopoly markets, static and dynamic measurement of market performance, pricing and product choice decisions, advertising, research and development, and theory of the firm. Requires attendance and team participation in a Competitive Strategy Game.”

“Political Economy I explores the major social science paradigms for analyzing relations among state, economy, and society. Through readings, lectures and discussion of original texts in political liberalism and individualism, neo-classical economics, Marxism, sociological and cultural theories, and neo-institutionalism, the seminar examines the fundamental assumptions on which our understanding of the social world and our research are based. All participants in the seminar are required to do the weekly readings before class meetings, and all are expected to participate actively in discussions. The course also requires two 12-15 page essays on assigned topics. The seminar is open to graduate students in all departments and also to undergraduates with prior course work in economics or political science and with permission of the instructors.”

I had my first session of this class today, and in describing what we could expect from the course, the professor explained to us that each week she would cover a different theory of political economy and present their most compelling arguments as if she were trying to convince us that each theory were true. Essentially, we would have to decide for ourselves which one(s) we thought made the most sense, without any bias from the course itself as to which ones were superior to others. The first lecture, as sort of an introduction, went on to describe how social behaviors and arbitrary patterns of communication have shaped the progression of scientific thought, which I thought was very cool. :’)

“Surveys social psychology and organization theory as interpreted in the context of the managerial environment. Covers a number of diverse topics, including motivation and reward systems, social influence, groups and teams, leadership, power, organizational design and culture, and networks and communication patterns.”

And on the syllabus:

“Virtually all of you will work in organizations, large and small, after you graduate from MIT or after additional schooling. There are many versions of what success will mean in these jobs and (thankfully) not everyone wants the same thing. But regardless of what you want from work, it will be very important that you understand how organizations function and how people behave in them. This course will expose you to a range of questions regarding attitudes and behaviors inside of organizations. We will also examine organizations from a broader societal perspective. The material in this course will better enable you to think about your behavior at work, your environment, your co-workers, and some larger questions about all of this. We will also help you develop research, writing and presentation skills that will hold you in good stead over the years ahead.”

“This course explores the ideal of social justice. What we want to know is what makes a society just. Must a society protect individual liberties in order to be just? Which ones? Must a society ensure equality in order to be just? What kind? Can a society ensure both liberty and equality? We will approach these questions by studying three opposing theories of justice – utilitarianism, libertarianism, and egalitarian liberalism – each foundational to contemporary political thought and discourse.”

Also – my actual schedule. It forces me to get up in the mornings, but I think (with dedication) I can adjust to that. 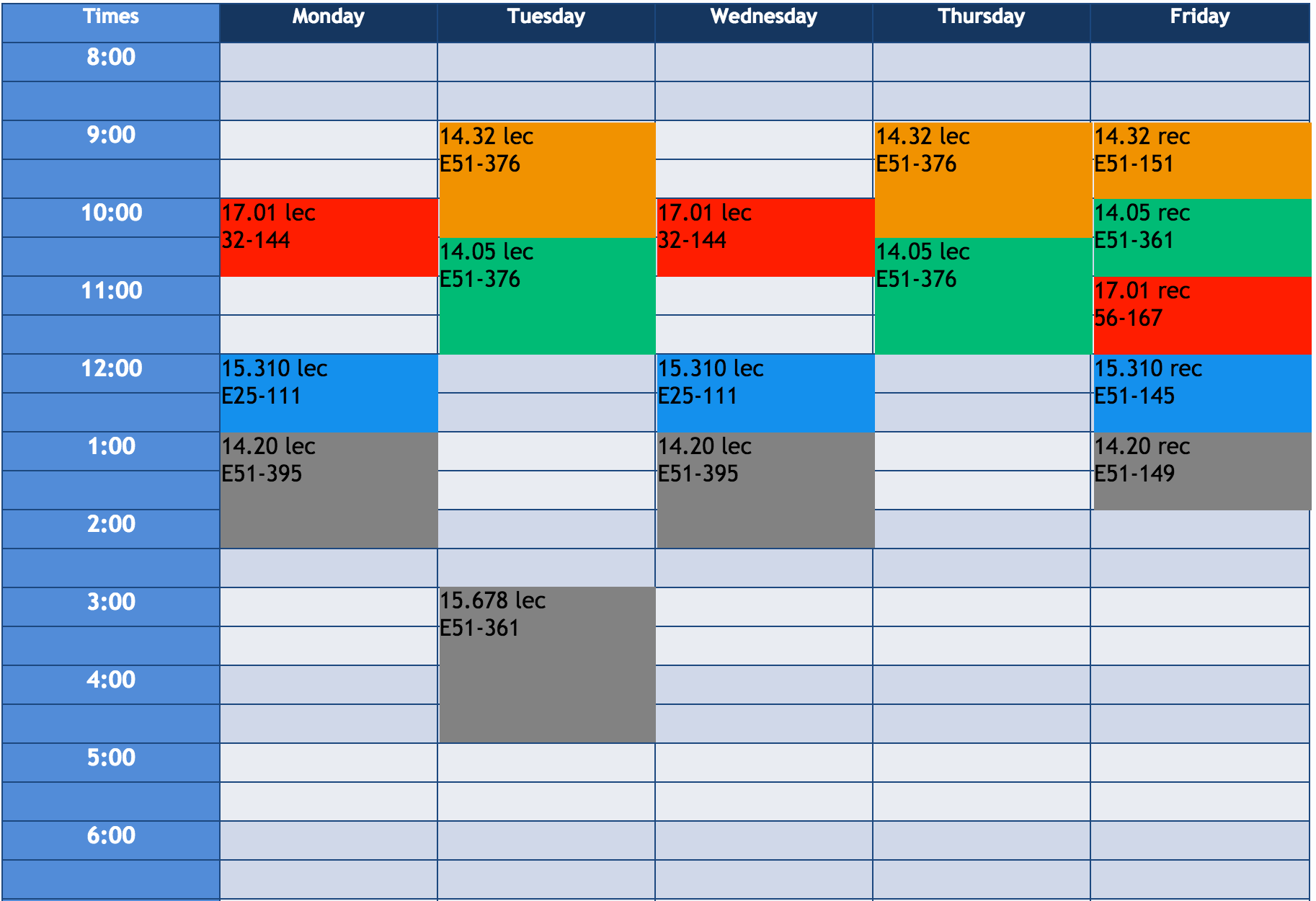