Do you ever feel like you can’t do just one thing at a time? These days, I can’t watch TV (a real TV) without internet on my lap. I can’t read or sometimes even sleep without doing “errands around the web” every once in a while. OK I may be an Internet addict, but I am not alone.

According to a recent New York Times blog titled “The Rise of the Toilet Texter“, 91 percent of people between 28-35 have used their mobile devices while on the toilet. Blame it on all those apps for everything you can think of.

As our Internet culture continues to mature, words such as “social media fatigue” are becoming legitimate concerns.

I wasn’t fully aware of this problem in my life until our trip to Seoul in my last week of IAP in Korea.

South Korea may be the Starcraft capital in the world (with its own serious Internet addiction problem to tackle), but it is also a country with such distinct and concentrated culture that upon exposure, inspires many thoughts about the differences in the ways we live our lives. One such distinction is the 찜질방 (jimjilbang), which refers to a Korean bathhouse. And it is my encounter with the jimjilbang that showed me…it might be time to pencil in some downtime.

Although the first public bath house opened in Korea in the 1920s, the Korean bathhouse has a history dating back to the 15th century. The most traditional element in these jimjilbangs are the hut-shaped charcoal kilns with varying temperatures. (I remember going into one that was 50 degrees Celsius or 122 degrees Fahrenheit, which isn’t even high in sauna standards; but I was nevertheless taken aback by the number.)

The New York Times ran an article last summer on jimjilbangs, and for visual reference, here’s a photo from that story. 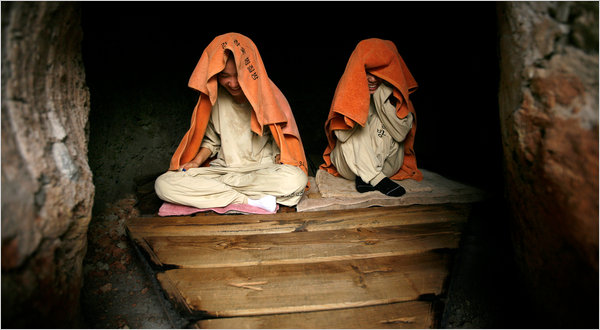 While today’s bathhouses boast restaurants, spa services, arcades, Internet cafes, movie rooms, etc., the focal point of the jimjilbangs are still the heated kilns that allow hardworking Korean men and women, young and old, to escape the fast-paced demands of modern life. That night in Seoul, our group of MIT students were among the many locals who retreated to the jimjilbang, happy to be sheltered from the brutal winds of winter at the very least.

Admission was just 10,000 won, which is a little less than 10 dollars. The entrance fee also came with a set of cotton t-shirt, shorts, and two towels.

The bathhouse is open all 24 hours of the day, but signs specify that you can only stay for 12 continuous hours each visit. That’s still pretty darn long. We wondered if and how the Korean bathhouses filter out the homeless population. I wondered if and how similar jimjilbangs can work into American culture. It’s also interesting that while many Americans pride on going to the gym regularly, the Koreans go to the bathhouse just as often to relax and sweat toxins out. Americans are notorious workaholics – we get 10 vacation days with an additional 10-15 days for full-time employees, which is still almost 10 days fewer than the 34 that South Koreans get. And it’s not like the American economy is performing extra stellar.

We had arrived at 10:30 PM, and there were still families trickling in. Grandmothers, mothers, granddaughters. Young men. Old working men. Another foreigner looking for an authentic Korean experience.

We laid inside the kilns, napping, chatting about economic theories (I was just a listener to that conversation), eating hard-boiled eggs, comparing our temporary dwelling to summertime in Las Vegas. We moved from kiln to kiln that escalated in temperature until it was too much to handle. I also clumsily tripped a little on the way out and brushed my forearm against the inner surface of the kiln. Of course a mark appeared soon enough; it would be my souvenir of the night.

During the whole experience, I felt like a baked pig. I’ve never paid to go somewhere to relax, sweat, and frankly, do nothing.

Paying to relax and get pampered may be on the calendar for the affluent or grown-ups working in the real world, but for a student like me, this seemed nonsense. We should be on the go! All the time! Multi-tasking! Weaving in and out of the constantly refreshing feed of life. I closed my eyes and tried to adjust to this mode of doing nothing.

Soon I found myself thinking…

Dear jimjilbang, I respect you for being a time-honored cultural tradition that not only sustains an impact on an entire nation, but also challenges the frenetic way of life we’re accustomed to today.

6 responses to “The Way We Live”