There's also no "Tennis" or "Senior Day", but that won't stop me from writing about them

In just four short weeks, my time as a MIT freshman will draw to a close. Boxes will be packed, old psets that I will probably never look at again will be thrown away, and students will be scattering across the world for the three months we call summer break. I’ve had the opportunity to try so many new and wildly amazing experiences here, some of which I’ve recorded in the semi-permanent realm of the blogosphere (who are we kidding, the internet is forever), and I look forward to the ones I’ll have in the future. Finals week will mark the end of an era and slowly, one by one, people will leave for internships, MISTI, vacations, or whatever else piques their interest. But it’s not really goodbye. After all, we have the consolation of knowing that come fall semester, we will all be returning to the familiar rhythm of psets, friends, and free food.

Of course, the nature of college renders that last statement faulty in one regard: not all of us will be returning. The new semester marks not only the exciting arrival of the class of 2018, but also the bittersweet departure of the class of 2014. On one hand, we are proud of their accomplishments and wish them only the best in whatever future lies before them. On the other hand, there will always be a whatever-shape-awesome-people-are shaped hole in all of our hearts.

Friday was the varsity tennis team’s last home game of the year and, consequently, Senior Day, a day to celebrate the seniors and all that they’ve accomplished. This year we had two graduating seniors, Lauren and Julia, and we were determined to make it one of the greatest senior days ever.

Here is a recipe that I have recorded for posterity:

Prepare the ingredients in the secrecy of someone’s dorm room, preferably in the company of your fellow teammates. Secretly eat some of the Oreos before they get baked. Begin senior day with heartfelt speeches and gifts from the coaches, followed by a presentation of the team gifts. Ensure that everyone is wearing their goofy glasses and end the mini ceremony with an impeccable (coughcough) group rendition of Treasure, complete with (questionable) choreography and rhythmic mumbling when the revised lyrics are forgotten. Win the match and celebrate the final home game of the season.

I started playing tennis when I was 8 years old at my local community park, the majority of my time on the court spent running around in circles and laughing with my friends. At the time, the mechanics of the sport were second in importance to the excitement of the games and youthful camaraderie. As I got older, practices became focused and I began to compete in individual tournaments. I made some amazing friends while travelling to national tournaments around the country, but tennis became more and more of an individual sport and the hours spent running around in circles with friends turned into hours of drills, conditioning, and matches. I loved playing tennis though, so I never really noticed the solitude of an individual sport until high school when I joined the tennis team and rediscovered the same camaraderie that I had had when I was 8.

At MIT, as a part of the varsity tennis team, I’m happy to say that I’ve found the same thing here: a second family. Everyone brings something unique and amazing to the team and I can’t imagine it being any other way. Of course, this solidarity is partly an inevitable byproduct of the amount of time that we spend together each week on and off the court. 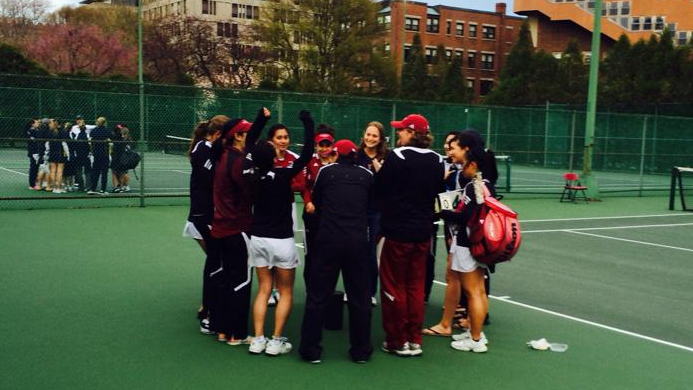 The team huddles together to celebrate the last home match of the season. I think there might also be a sandwich on the ground. I’m not sure.

Like many other fall sports, we started pre-season practice a week before classes started, breaking in new tennis balls while freshman orientation was in full swing. Practice is a daily affair from 5:15-7pm and we have matches virtually every weekend, some at home and a rare few a couple of hours away by bus. Only weeks ago, during our spring season, we played a match at Vassar College in New York and spent the four hour bus ride back playing road trip games and trying not to lose our sanity (though we did discover an appalling lack of desserts that start with the letter E). There is certainly a substantial time commitment that comes with being a student-athlete, one that becomes particularly noticeable when you find yourself staring at the fascinating patterns on the back of the bus seats instead of attending one of the countless events that usually take place on a fine Saturday night. But thankfully, my professors and TAs have been very understanding whenever I have had to skip class for tennis so the only problem I face is finding the time to catch up on the material I have missed.

Being a part of the team has solidified my belief that while some things can be done alone, it doesn’t mean they have to be; having your friends and team mates around to support you makes things infinitely better. It’s like the difference between eating a piece of bread and eating a piece of bread with peanut butter, Nutella, and bananas cheering you on. Unless you’re allergic to peanut butter, in which case that was probably a really bad analogy.

Our season wraps up with NCAA regionals next weekend and while Friday was the last home match, next weekend could be our last match of the school year. We’ll be saying goodbye to daily practices, to bumpy bus rides, and to blurry pictures of my friend’s lecture notes from the classes I’ve missed. Most importantly, we’ll be saying goodbye to the seniors. I know I’ve only gotten to know them for a year, but it’s been such a year of unforgettable moments.

Next year I’ll be a sophomore and the cycle will begin again: new faces, new friends, new family, and the fond memory of all the seniors that have come before. Thankfully, underneath all this change, the joy of the sport and the friendships formed will always be constant. I’ve been playing tennis for eleven years now and I don’t plan on stopping any time soon. In the future, if you ever see an eighty year old lady running around in circles on a tennis court and laughing with other similarly aged yet surprisingly spry senior citizens, it’s probably me, rediscovering the same happiness that I had when I was 8 and that I have right now.