Concerning the half I spent at home

My last final ended at 12pm on a particularly ominous Wednesday. I say ominous because I had just slogged my way through three other finals in the past two days (6.0001, 20.110, and 5.13) and the looming cloud of the 7.03 final was fraying my nerves. I’m sure the actual weather was probably quite lovely, but my stomach was too tightly knotted for me to notice much else. Thankfully, just a few hours after putting my pencil down and saying goodbye to genetics, at least for the time being, I was on a plane headed back to sunny southern California. My parents and my sister met me at the Los Angeles airport and before long, I was settled into the comfort of a familiar bed (cuddling cat named Stoopy included).

Even though winter break itself ended on the 4th of January, I remained at home for two more weeks, not returning to Cambridge until this past Friday. IAP is an amazing opportunity to take different classes either for credit or for fun, travel to exotic locales, gain experience at fascinating externships, or participate in an assortment of competitions. Last year I took advantage of IAP to take the MIT EMT training course so I could become a member of MIT-EMS.

I think there is some pressure to always be doing something, to always be busy, to always be improving yourself in some way. And while this is surely an admirable outlook on life, I think it’s also important to say that there is absolutely nothing wrong with just taking a break. I found this last semester to be far more stressful than freshman year had been and after taking my last final, I could recognize how my chronic worrying and distress were beginning to wear on me. While other students began returning to campus, I stayed at home and took some much needed rest.

Go home. Be with your family. Have some fun. It’s not the end of the world and besides, spring semester is just around the corner during which it will be back to the hard grind of work, work, and more work.

I didn’t spend these first two weeks of IAP doing absolutely nothing though. As you may or may not know, though I am majoring in biological engineering, I am also a pre-med student with aspirations of becoming a physician one day. Knowing that I wanted to spend at least some part of IAP at home, I turned to Infinite Connections which is MIT’s alumni association website, via which students can get in contact with alumni, among other things. 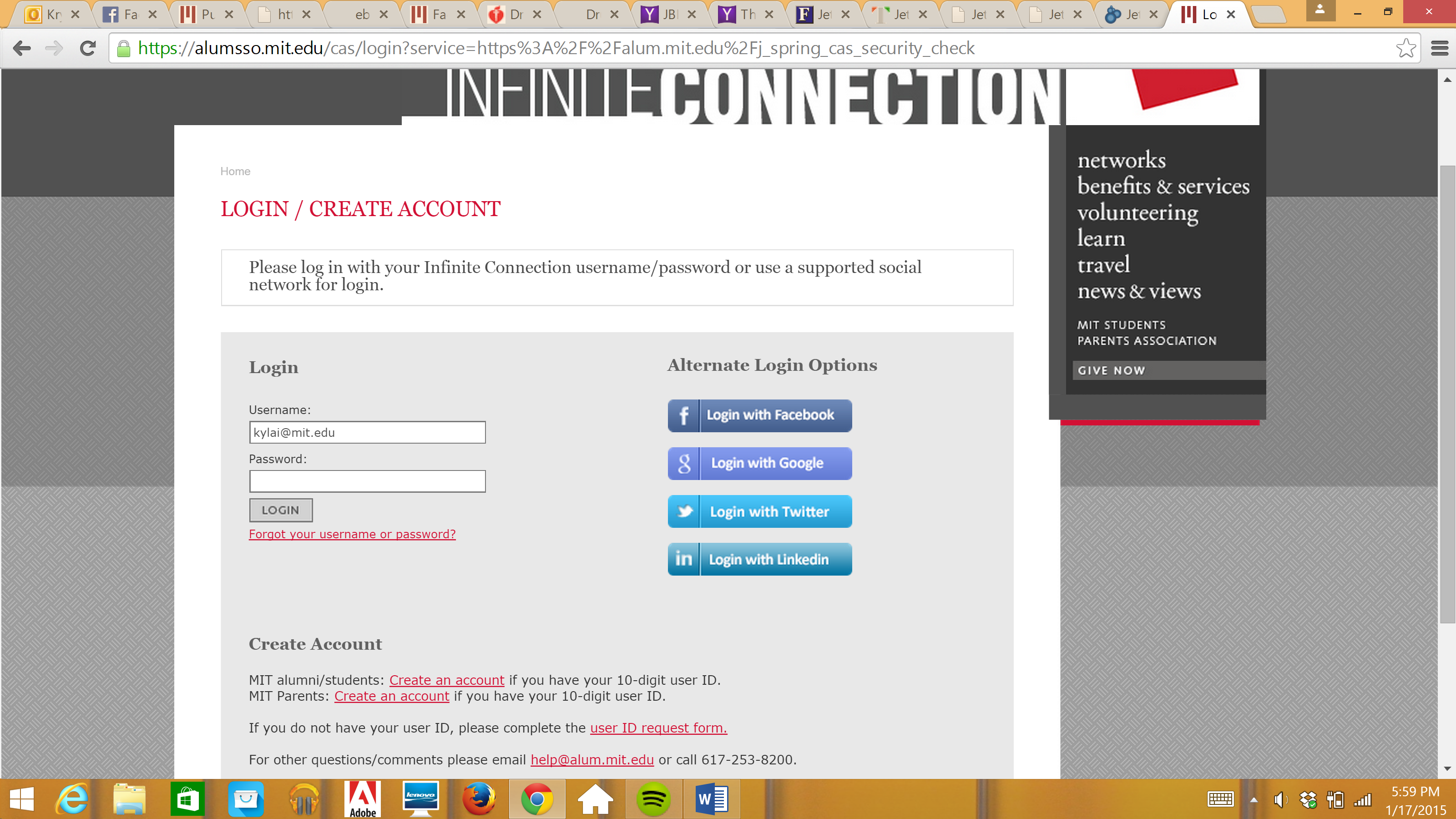 You can sort through the directory using the different categories on the left. Since I was going to be in Southern California, I narrowed the list down to Californians in a healthcare occupation. 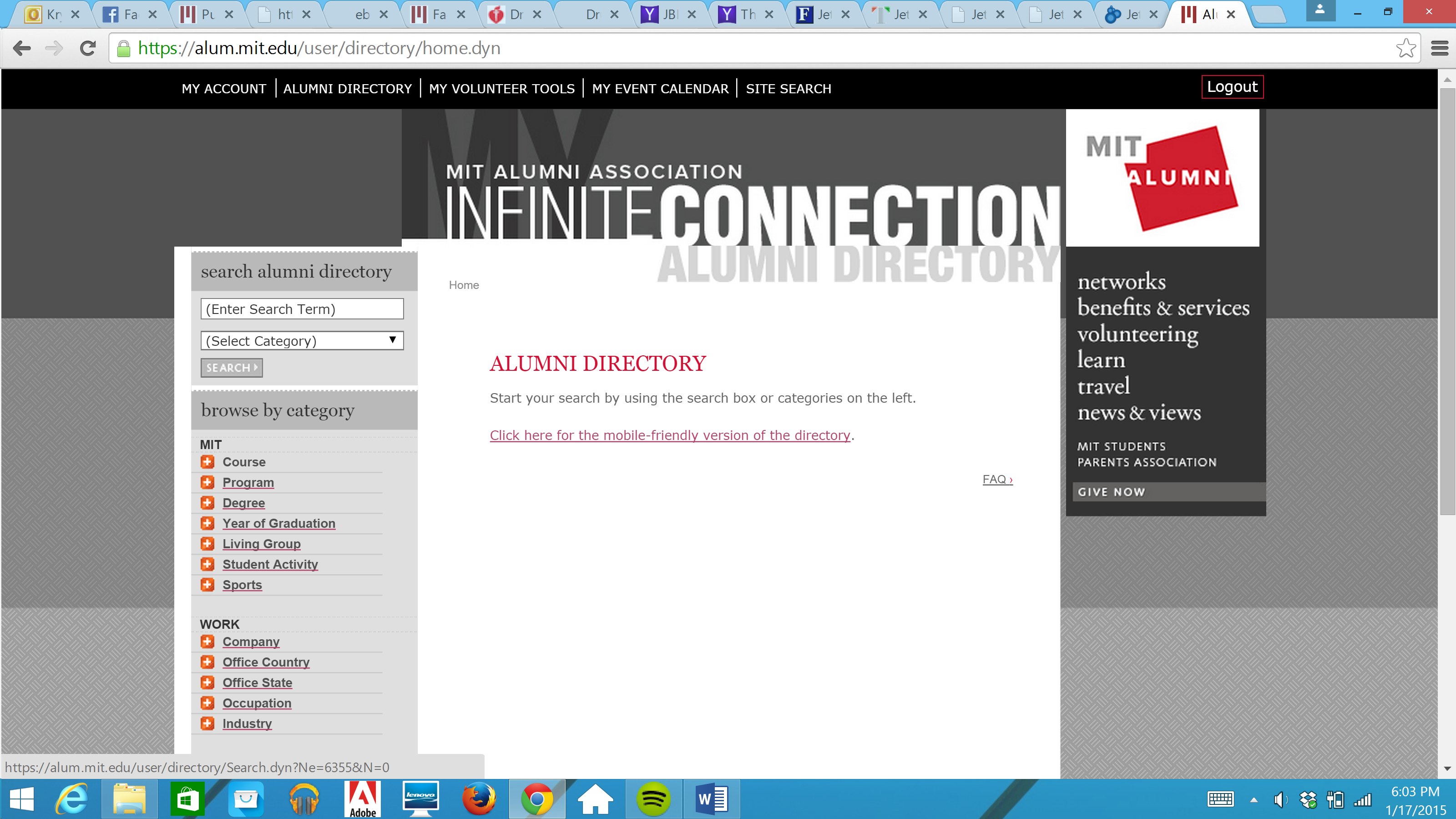 Using those filters, I was able to look through a rather long list of names, degrees, and job titles, looking for practicing physicians in my area to email. The response rate, however, was not very high considering how many initial emails I sent, but I’m grateful for the few that did.

I was lucky enough to shadow three different doctors in three different fields – neuroradiology, cardiology, and critical care/pulmonology – and during my time at their hospitals and offices, I got to see not only the commonly discussed sides of medicine, like patient interactions, but also the less talked about details, like paper work and filing insurance claims. Each physician was kind enough to take some time out of their day to teach me, a measly little sophomore, about their work and explain things that I was unfamiliar with.

IAP is a great time to shadow because you aren’t as limited by classes or other extracurricular activities when it comes to scheduling and you can stick around for an entire day (if their schedule allows it) to see their whole spectrum of work.

3. Be indecisive about what classes to take in the spring

I still have no idea what my finalized spring schedule will look like. I know for sure that I will be taking 20.310 Molecular, Cell, and Tissue Biomechanics, 7.05 General Biochemistry, and 20.109 Laboratory Fundamentals in Biological Engineering because they are all requirements for Course 20. But after that, it’s all up in the air.

I spent a lot of time on https://picker.mit.edu/ rearranging my schedule and looking up classes that would fit in nicely between already scheduled slots while also fulfilling either some deep-seated curiosity within me, or at the very least a graduation requirement. Another website that people use for course planning is https://planner.mit.edu, but I personally find the former to have a better user interface (for my tastes at least) and the function to choose a particular time slot from those available as opposed to having it automatically arrange your classes. Although I certainly do see the appeal of the latter. It’s all personal preference really.

How many classes should I take? Do I want to take a humanities class? An art class? Will I have time to take five classes if I also want to get a UROP for the spring? Should I take another technical class? Blarg. I am overwhelmed with choices. 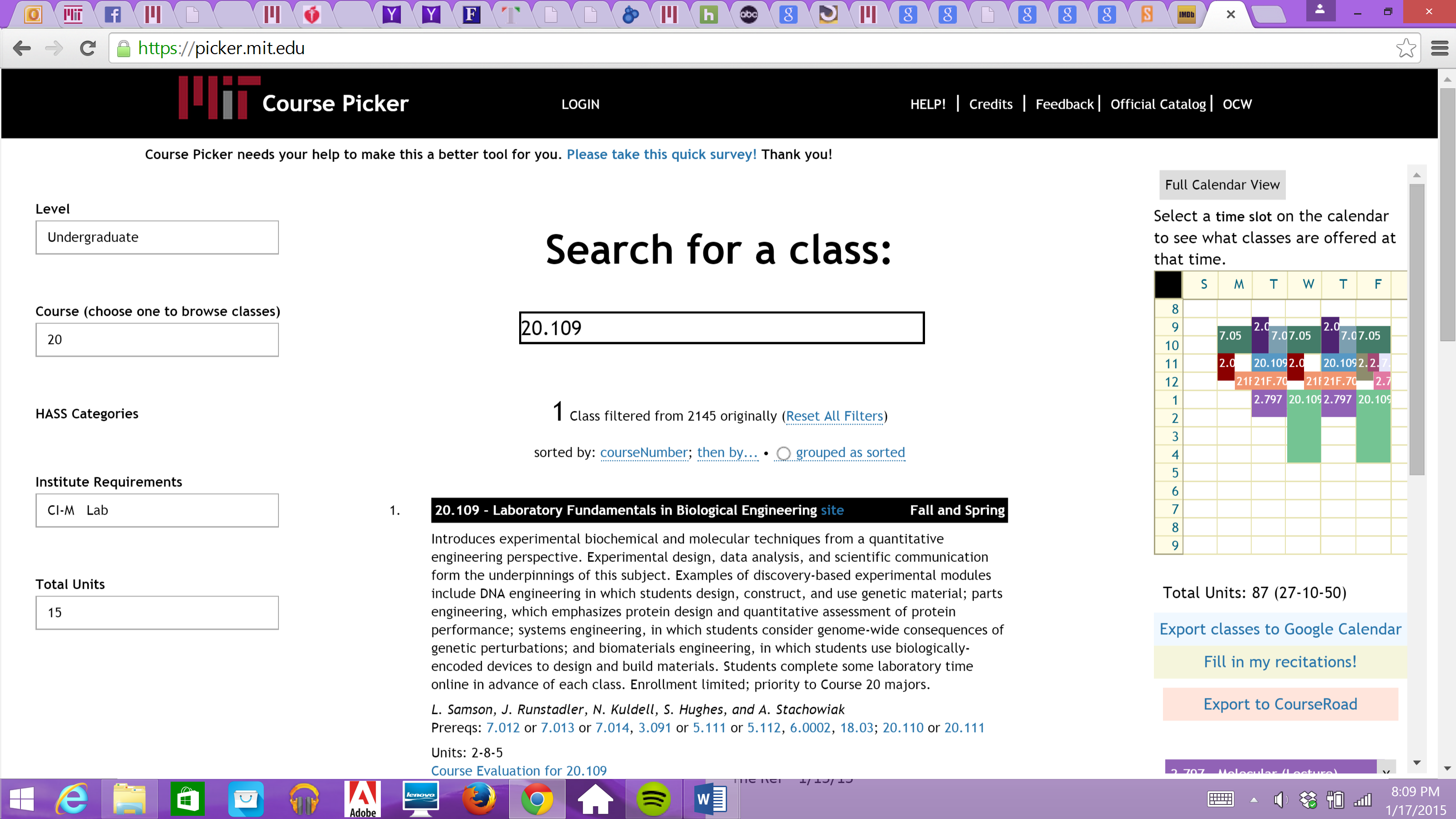 Official registration day isn’t until February 2nd though, the day before classes start, so I still have time to agonize over my life decisions.

4. Become intimately acquainted with the sofa (or an equivalently squishy lounging object)

While I wasn’t shadowing physicians or spending quality time with my family, I admit that I spent a lot of time lying on the sofa either watching a movie or reading a book. Whenever my back started aching from too much sofa-sitting, I’d simply switch over to my bed or the carpeted floor. Have I mentioned my love for lying on the floor? Well now it’s out there.

Floor-people unite. (Apparently there is a Facebook group called “Sometimes i just like to lie on the floor and pretend i’m a carrot”. Make of it what you will.)

Though I spent a lot of time lounging around the house, I also went to the gym to stay active and played tennis a couple times with some old friends. Being lazy can be oddly draining in an unexpected way so I always try and exercise consistently throughout the year to keep the blood flowing and my tennis arm loose.

IAP is also prime time to catch up on some much needed movie watching. I figure if I get all of my movie and TV watching out of my system over IAP, I’ll be able to focus more on school work once the spring semester really gets started. So far I’ve made it through 11 movies:

The Prestige – despite having accidentally read part of the spoilers for this movie, I still somehow ended up surprised at the end

Man of Steel – not a quality movie

Primer – my second attempt at this movie. The first time I watched it I don’t think I could have summarized any part of the plot for you, but I guess the more times I watch it the more I’ll understand

The Game – twists and turns galore

The Ref – Kevin Spacey in a comedy, plus quotes like “suck on a grape!” (although I am perfectly aware that this quote has been taken out of context, it’s still one of my favorite things to say right now)

I’m a huge fan of movies with unexpected twists at the end so if you have any recommendations, I’d love to hear them!

My sister and I are always looking for new and exciting things to try. Instead of standard gift giving over the holidays, we’ve begun to veer towards having something of a “sister day”, during which we spend quality time together and basically get into shenanigans. Last year we ate Brazilian barbeque and watched Frozen together. This year, we took a painting class. I have never painted before and my sister hadn’t since her younger years (she’s an old lady now), so the paintings we did of a massive pine tree were interesting to say the least. I don’t have a picture of our masterpieces, but the point is we had a lot of fun making a huge mess and getting paint all over the place.

(Go watch this clip from Courage the Cowardly Dog (at 10:16) and tell me it dosn’t sound like Bane trapped in an ice cube: https://www.youtube.com/watch?v=YnyjpX72JME)

Whenever I go home, I also try and cook as much as I can because I know that upon returning to campus, my access to acceptable cooking appliances becomes severely limited. Maseeh has one kitchen in the basement about the size of my room for all residents to share. There are functional burners, two refrigerators, and a dwindling assortment of pots and pans but the last time we tried to bake pies in the ovens we found out that they failed to retain heat.

I got to cook a special dinner for my whole family one night (though I think I left a trail of destruction in the kitchen) and over the course of early January, my sister and I attempted to bake bread using wild yeast in the air. We called our sourdough starter our “yeast baby” and took care of it by feeding it twice a day with a little bit of flour and water. Here’s the recipe we followed if you’re interested:

Anyway, the takeaway here is that IAP is a great time to try new things and have fun. I know there are quite a few different opportunities to learn new things both on and near campus and even though I wasn’t on campus, I still tried to take advantage of my time off and do a little dabbling here and there.

Notes from the author:

I recently flew back to campus and though this is only my first day back, I’ve already attended one meeting and taken a five hour shift for MIT-EMS. Things are going swimmingly and I look forward to the next two weeks of IAP during which I hope to watch more movies, finalize my spring schedule, and maybe spend a little less time in bed and on a sofa.