A couple weeks back, Winnie reminded me that the Dragon Boat Festival existed⁠01 At some point in my childhood my mom definitely made me read up on traditional holidays, but at some other point in my childhood, I started remembering holidays by the food…oops and asked if we were going to make “those rice tamale things,” ⁠02 Because Winnie speaks Taishanese (a variant of Cantonese) and I picked up impressively little Cantonese growing up, our ability to communicate in Chinese is Pretty Limited. Granted, we only attempt to do so with food items — and I can kind of dredge up some memory of what my dad might’ve called this food — but even so, the only words I definitely know are “shrimp dumplings” and “trash” and I end up using a pinyin keyboard and Google Images to help me out half the time. which, to be fair to her, is probably a better English description of zongzi than I could’ve come up with.

Since it’s celebrated on the fifth day of the fifth month of the lunar calendar ⁠03 this corresponds to sometime in May or June — it’s not consistently the same day in the Gregorian calendar. , it’s also sometimes known as the Double Fifth Holiday. The fifth month is considered unlucky, so it’s now mostly a day for getting rid of disease and bad luck. There’s a couple competing theories as to what the holiday originally celebrated, but a key theme among them is a) boats and b) rice balls. Some stories say that a poet drowned in a river and people raced out in boats to find him and tossed in rice balls when they couldn’t find him; some other stories say that a different guy was tossed into a river (and people raced out in boats and tossed in rice balls when they couldn’t find him); another story says that no poets were involved and the day originally was to worship dragons (and toss rice balls into a river, probably.) Either way, it’s now a public holiday in mainland China, Hong Kong, Macau, and Taiwan. People usually go dragon boat racing while eating zongzi, but since Winnie and I are tired college students with a distinct lack of dragon boats hidden in our rooms, we decide that zongzi alone will suffice.

It turns out that trying to make not-well-known-Chinese-food in Boston is remarkably harder than it is back at home. At home, we probably had half the supplies from the prior year — or I could probably go ask a neighbor for some if we really hadn’t any on hand — and the local Asian/Hispanic grocery definitely had whatever perishables we’d need in relatively reasonable quantities.

Here, I go to H-Mart hoping to hunt down some bamboo leaves and sticky rice, the former of which they did not have, which I only discovered after trying to talk to multiple employees in English and Spanish before defaulting to my usual “pinyin and Google Images” tactic. I give up on H-Mart and walk three miles to Chinatown, where I do find bamboo leaves…and pork belly, in massive quantities. I ask the nice man at the meat counter for a pound of it. I walk away with five pounds of it. He also offers to sell me no less than three pounds of tiny dried shrimp, at which point I think about my overflowing fridge, my hatred for seafood, and Winnie’s shrimp allergy, and I leave having decided that authenticity is overrated. At some point, I also manage to rope Dylan⁠04 Dylan, thankfully, does speak Mandarin, but I think I’m going to live by my pinyin and Google Images strategy from now on. into this debacle; on my way home, I pass by at least three bakeries — all selling pre-made zongzi! — and regret all my life choices.

There are several ways to make zongzi. There is a proper way — the kind seen in every youtube tutorial of this online — where you take a single leaf and somehow fashion it into a tiny little pyramid of rice-containing goodness with origami magic. There’s also the way I’ve made zongzi more or less every year as a kid, where my mom is an electrical engineer and lived by the idea that structural integrity was the only important aspect of zongzi beyond taste, and so I’d never actually learned how to make them beyond “haphazardly surround rice using 2-3 (maybe 4?? depends on bad you are at this) leaves and a metric ton of string and pray (to any and all deities out there) that they stay intact.”

Winnie, a course 2, likes this reasoning. Winnie also pulls up a tutorial on how to do it properly, unlike Dylan and I (who are determined to do this IKEA-furniture-style), but gives up on aesthetics and goes back to making extremely-structually-sound zongzi pretty quickly. 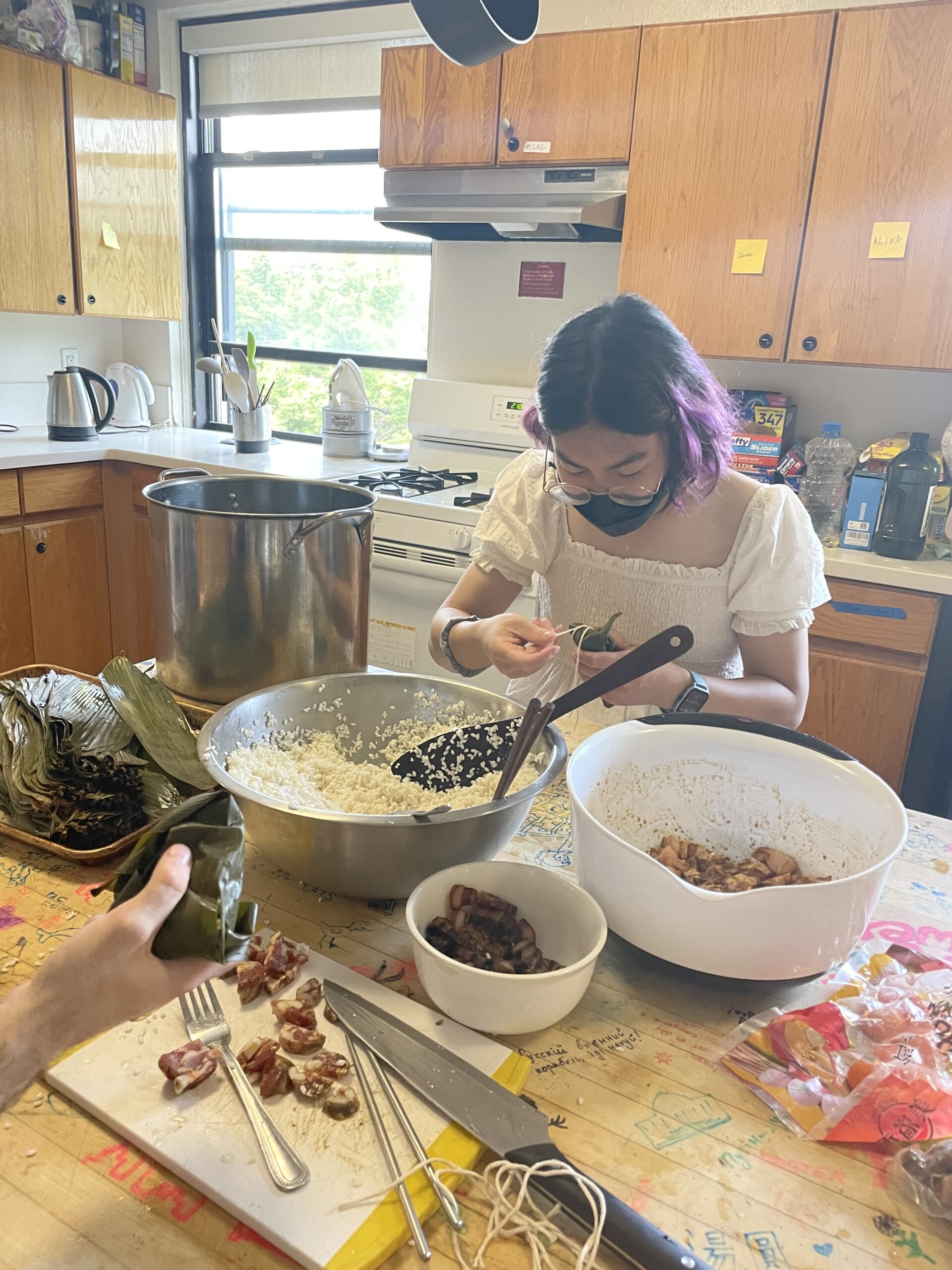 Dylan’s predictably a little more concerned about topology, given that he just took a class on topology. Unfortunately, being theoretically good at topology doesn’t really translate to executing it in the kitchen: 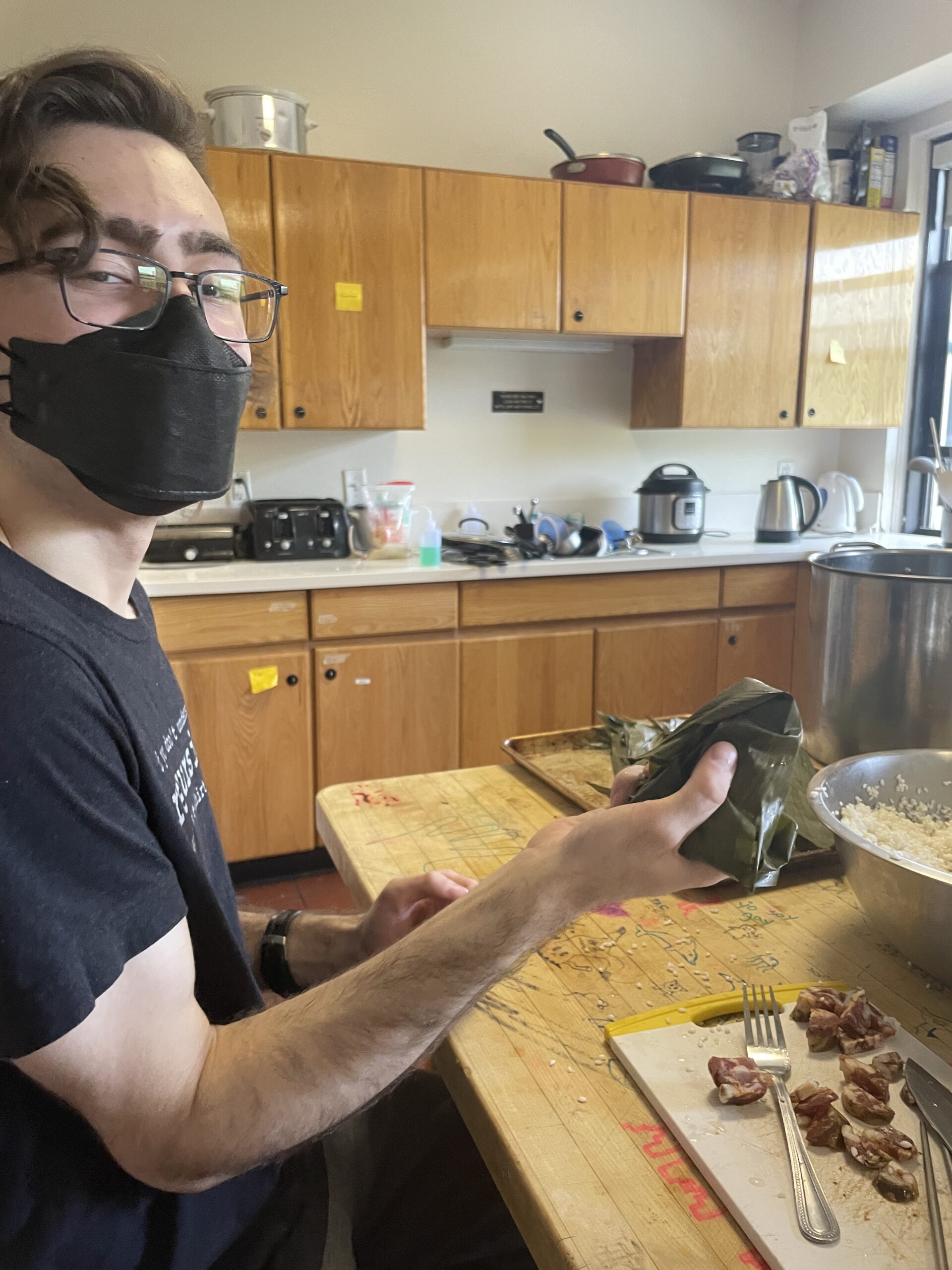 To his credit, he’s the first one out of all of us to make anything even vaguely resembling a pyramid. It’s a pretty good pyramid, too. Unfortunately, Dylan also can’t reproduce it.⁠05 “at least I tried,” says Dylan, “and that’s more than can be said for a lot of papers out there.” 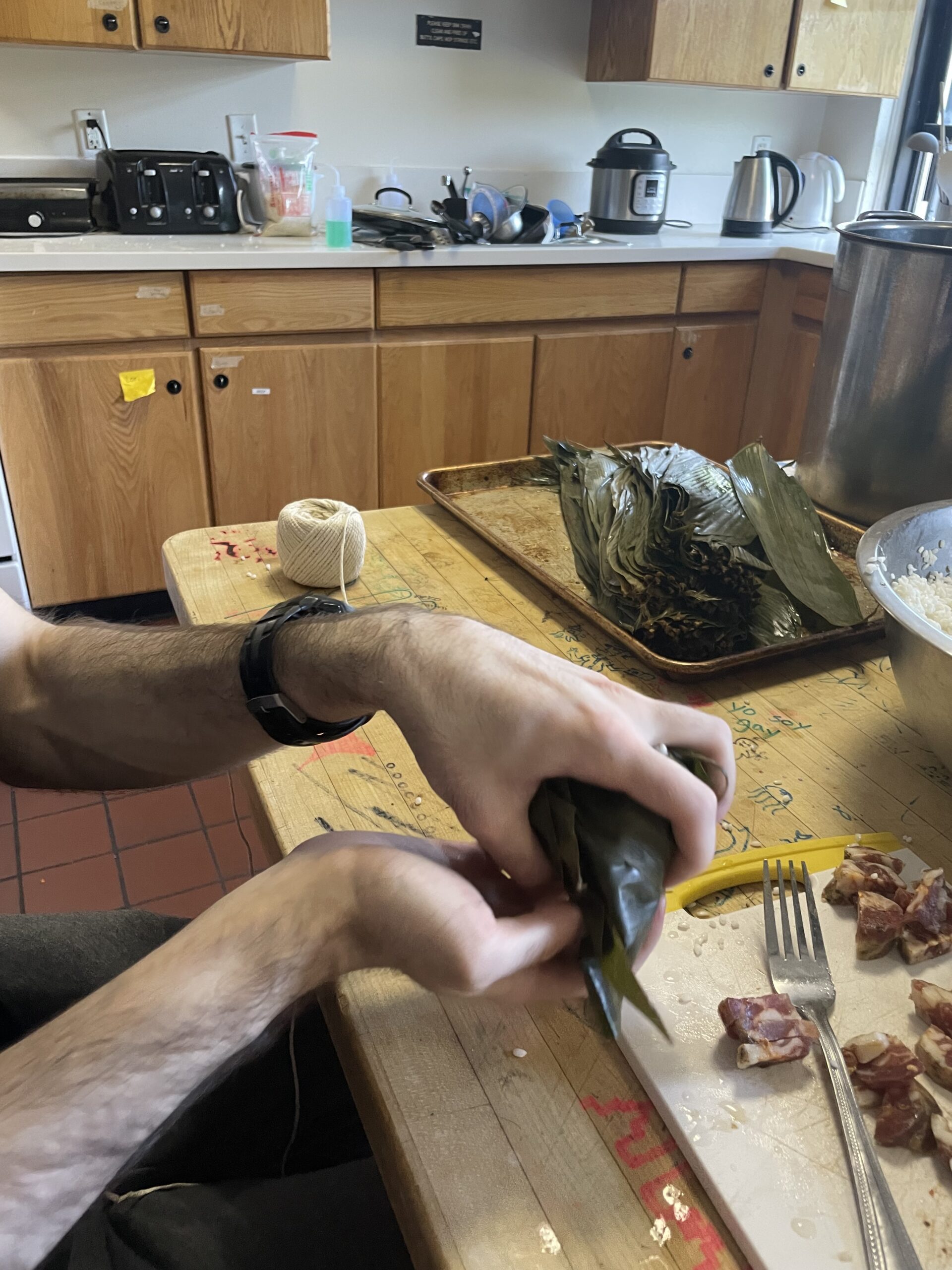 At some point, Dylan asks me what major-specific trope my zongzi should fill, given that I’ve already laughed at his topological troubles and Winnie’s “screw-this-they’re-structurally-sound” approach. I tell him they’re not alive and therefore my classes are not applicable, but this turns out to also not be true. I just make really consistently mediocre lumps. Eventually, I figure out the pyramid thing, and then they become consistently mediocre pyramids. Maybe my only superpower is consistency, gained from pipetting one too many 96-well-plates. 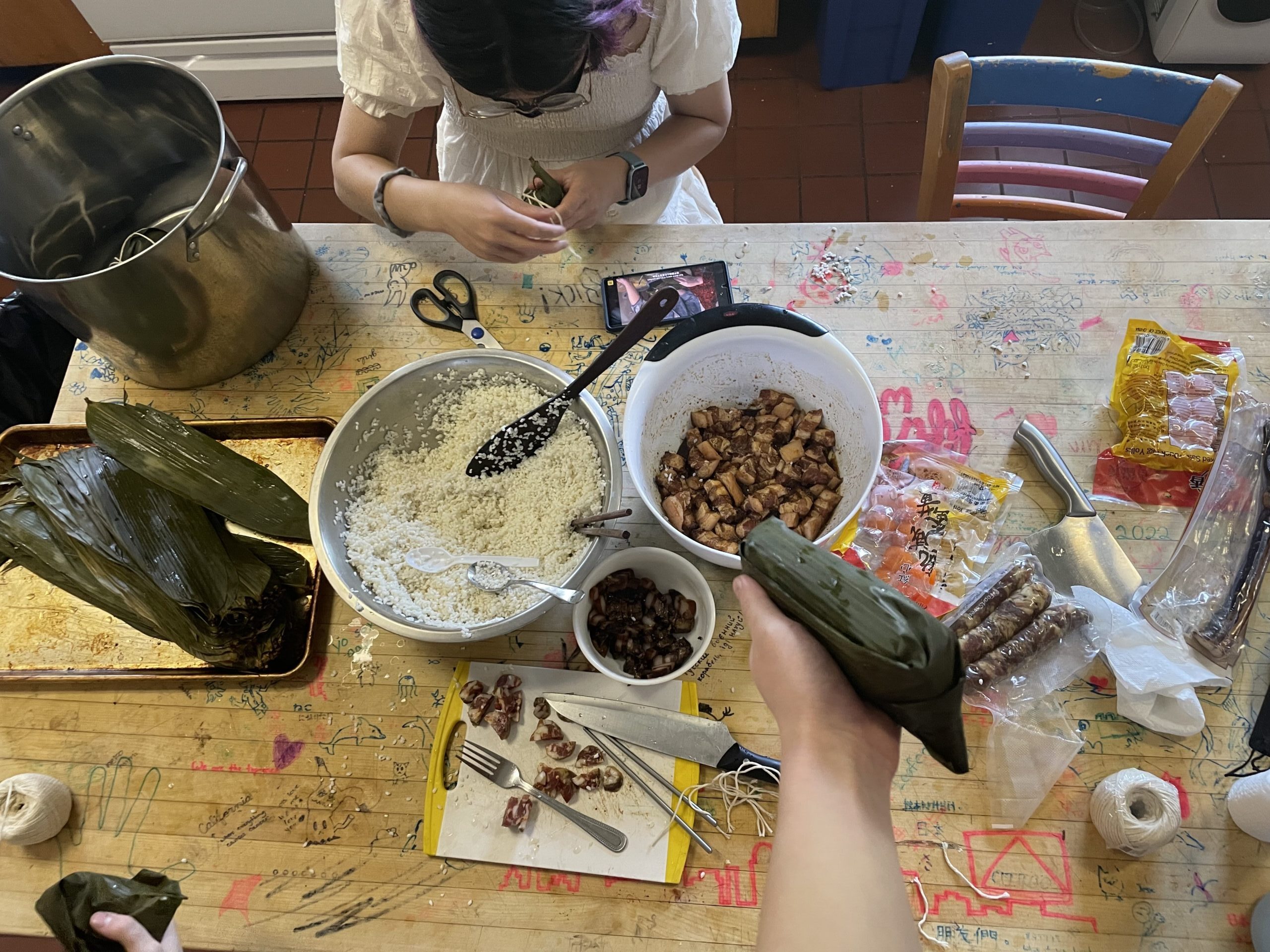 These days, the idea of home brings up a lot of complicated feelings for me. I haven’t been back in almost two years, and most days I like it that way. Still, sometimes I crave the ability to Go Home and be off campus and pretend that MIT-stress will never reappear in my life. Sometimes I miss the ritual of making too many well-tied zongzi and eating them out of the fridge for the next six months. 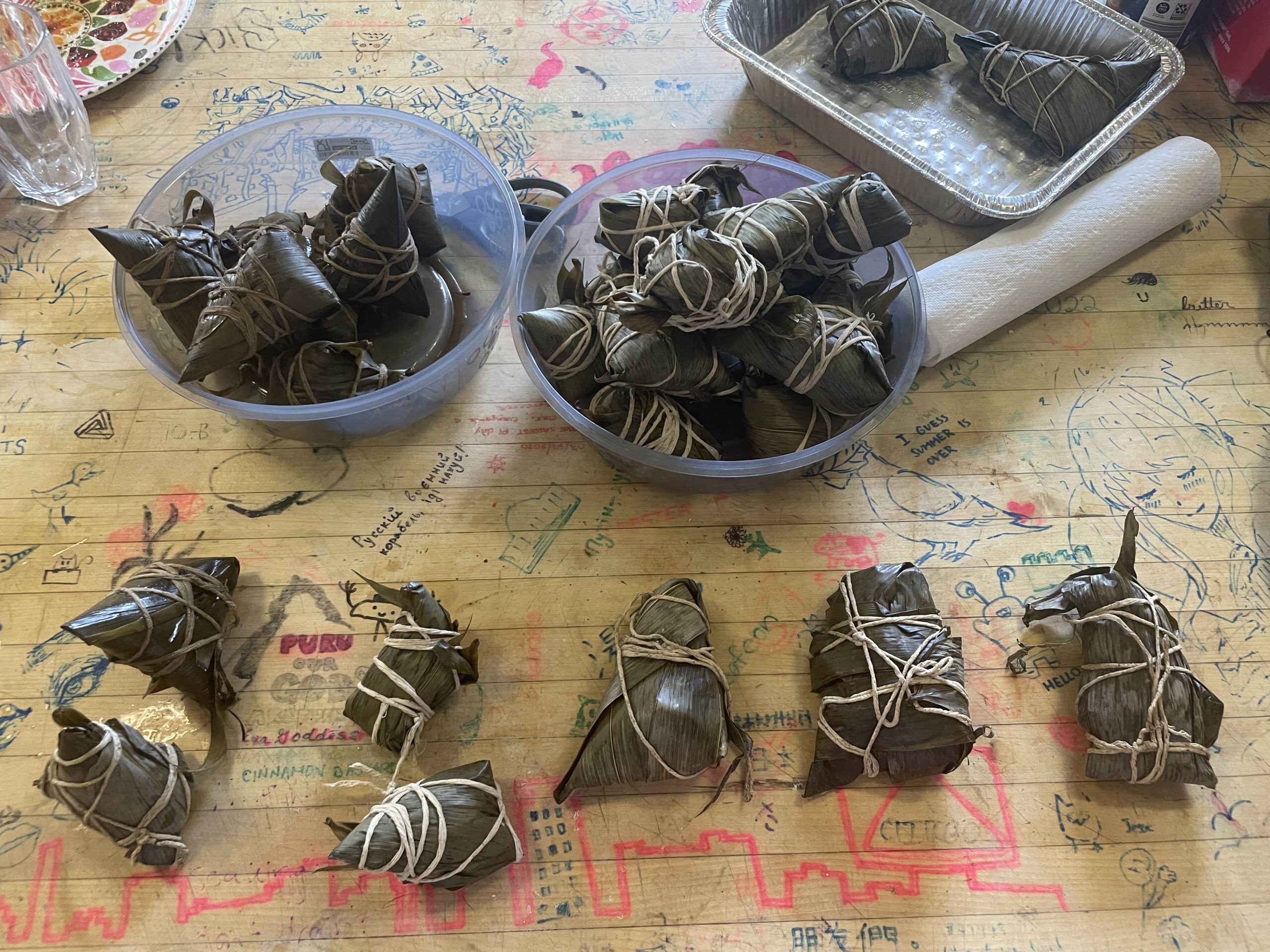 We make some weird shapes. We eat some weird exploded shapes, courtesy of Dylan’s topologically-correct-but-structurally-unstable construction. We stuff the rest into an already-overfull fridge, and it feels oddly like I’m home and away from home all at once in the best way possible.