Trick or Treating by Krystal L. '17

I can’t remember the last time I dressed up for Halloween. Last year I celebrated by popping into Spooky Skate and skating (read: falling on my butt) around the ice rink a couple of times, sans costume. But that was as close to a celebration as I had come in quite a few years.

A few days ago, I was aimlessly scrolling through some old photos on my phone when I discovered a picture of 6 or 7 year old me dressed up as a crab. Since I’m smiling in the picture, I can only presume that I was highly amused by my get-up and probably hopped up on the mere anticipation of sugar. I was reminded of the days when Halloween meant spooky decorations, exciting costumes, and yes, the all-important trick-or-treating.

The day started off like most Fridays, with 20.110 at 10am, followed by a 5.13 at 11am. As we entered the 5.13 lecture hall, our costumed TA’s were holding large plastic bags of candy from which we each took a couple of pieces. One of the TA’s was even dressed as R.B. Woodward, MIT genius extraordinaire (http://en.wikipedia.org/wiki/Robert_Burns_Woodward). Seriously, every time one of the course 5 professors mentions R.B. Woodward, I can’t help but be impressed all over again.

This is the sight that greeted us at the front of the lecture hall: 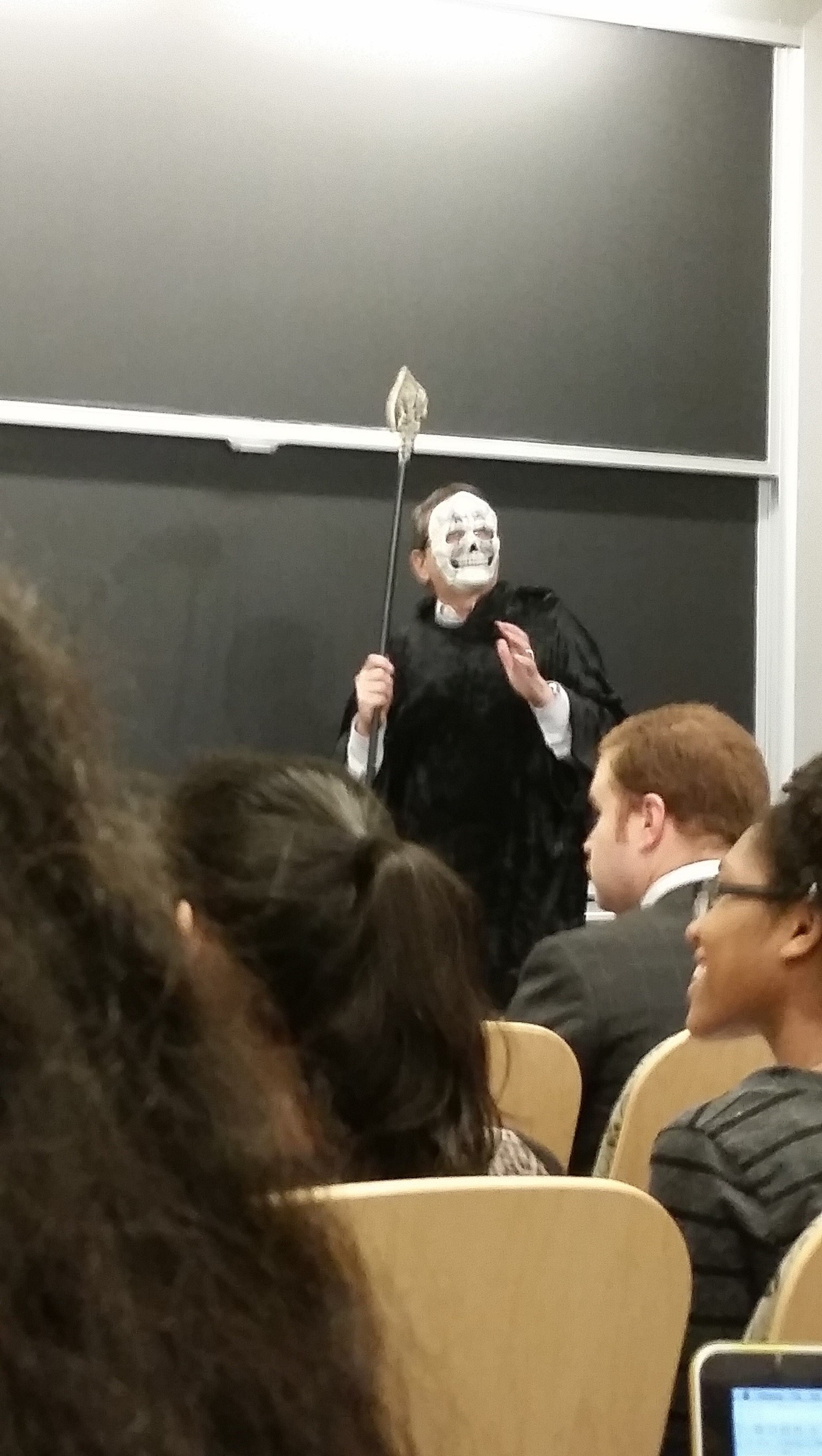 Professor Buchwald dressed as some incarnation of death (?). I have no idea. But hooray for costumes in class!

After class ended around 4pm (6.0002 recitation), I headed back to my room to bum around for a few hours before 6pm, which was when the tennis team had planned to meet to go trick-or-treating. To be honest, I had had no intention of going anywhere on Halloween, but the trick-or-treating in the Beacon Hill neighborhood was rumored to be top-notch. Plus, hanging out with friends for a few hours seemed infinitely more interesting than psetting in my room.

At 5:57pm, I had no costume, having resolved to just tag along in the back while the others grabbed handfuls of candy. Rena ’18, however, who had gone shopping at the Garment District for her wonderful Minnie Mouse costume, was adamant that I dress appropriately for the holiday. A 15 minute delay in the meeting time allowed for some scrambling on our part to put together something passable. After asking around for last-minute costume ideas, we settled on one of the easiest costumes to pull off: ninja.

Krystal’s Guide to Being a Ninja in 10 Minutes or Less: 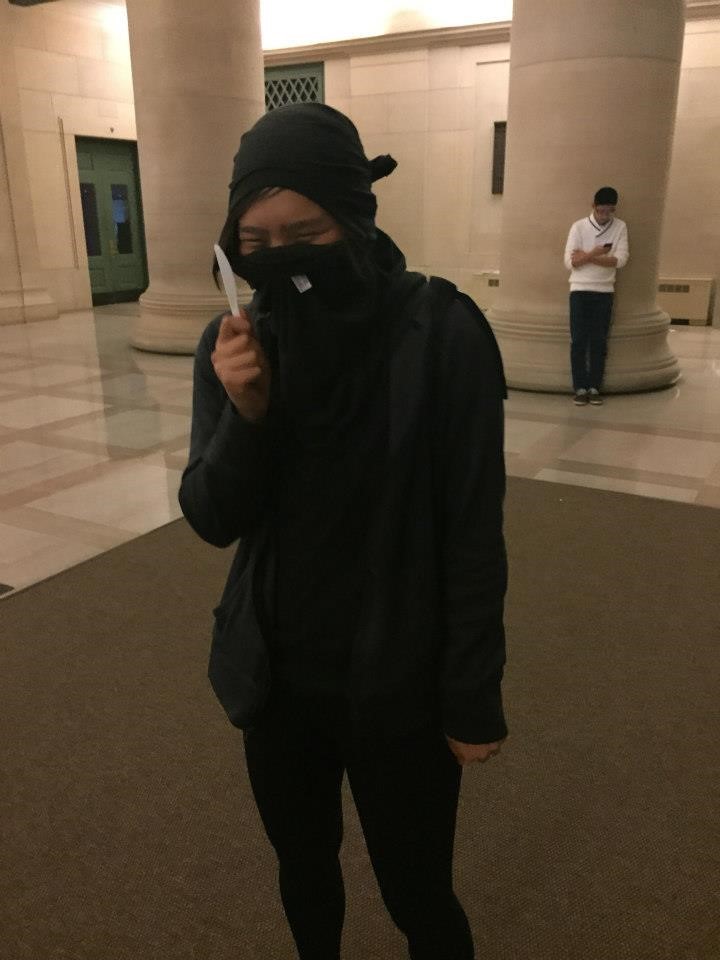 Me as a ninja! Plus a random guy texting casually in the background.

We took some photos in Lobby 7 to commemorate the moment, making sure to take a few in front of the MIT seal, a hot spot for tourists and visitors. I’m pretty sure a group of tourists walking by were taking pictures of us being silly. Now I exist as a digital copy in some stranger’s pocket. I can’t tell if this is a good thing or a bad thing, but I’m going to count this as a win for now.

Here are some pictures of our costumes: 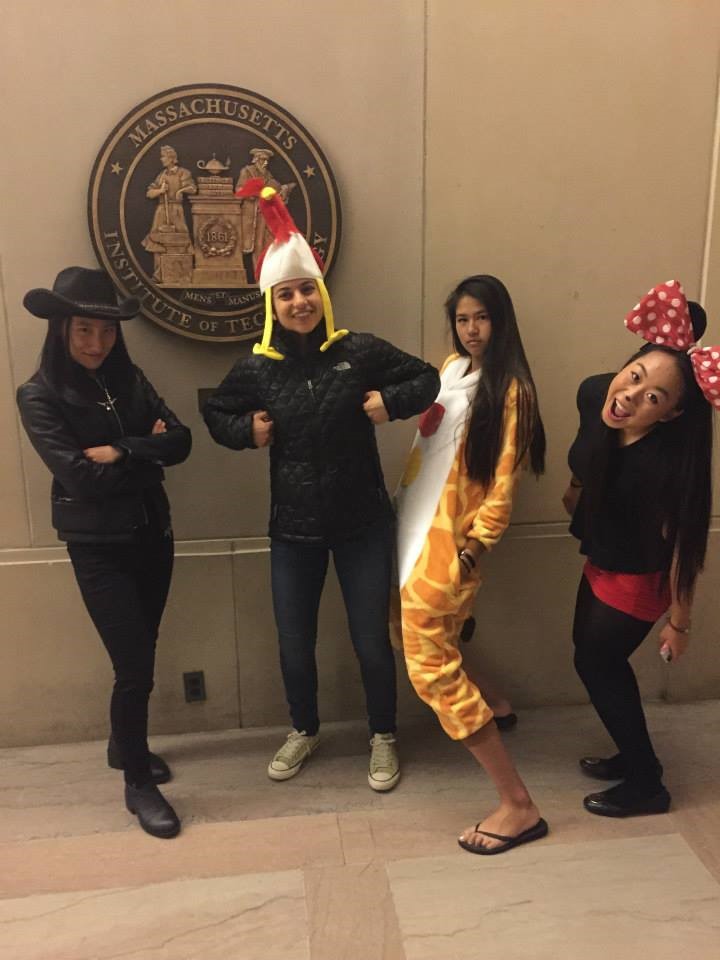 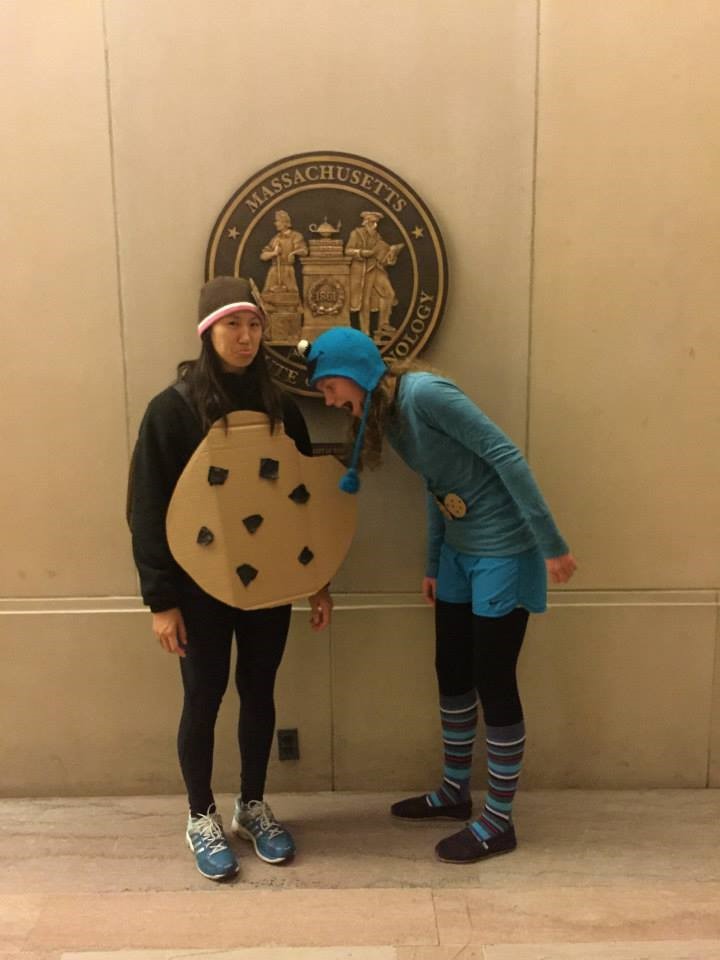 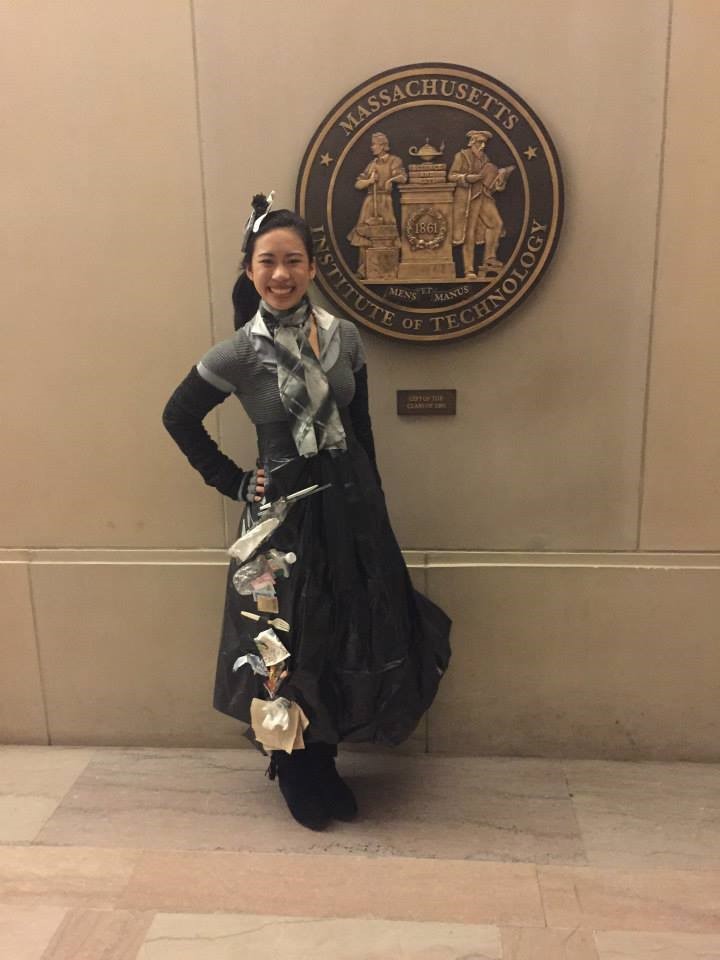 *** As Trash. Or, for the more environmentally inclined, Recycling.

After taking the red line to MGH, we walked a few blocks into Beacon Hill where some streets had been blocked off by the police so children and trick-or-treaters could run amok between the houses. Instead of the usual business of walking up long driveways and knocking on doors, residents in the cordoned off area were sitting on their front steps with enormous bowls of candy, ready to greet costumed individuals and pass out the goods.

The cobbled pathways, which theoretically sound very quaint, were actually a nightmare to walk on in flip-flops, but in the moments where I wasn’t tripping over my feet, I was admiring the festive decorations and the adorable costumed individuals who were our candy-seeking brethren. There were jack-o-lanterns grinning wickedly from front stoops, glowing lights crisscrossing the narrower alleyways, and the usual, spiders, ghosts, and ghouls dangling from ledges, fences, and low-hanging branches. 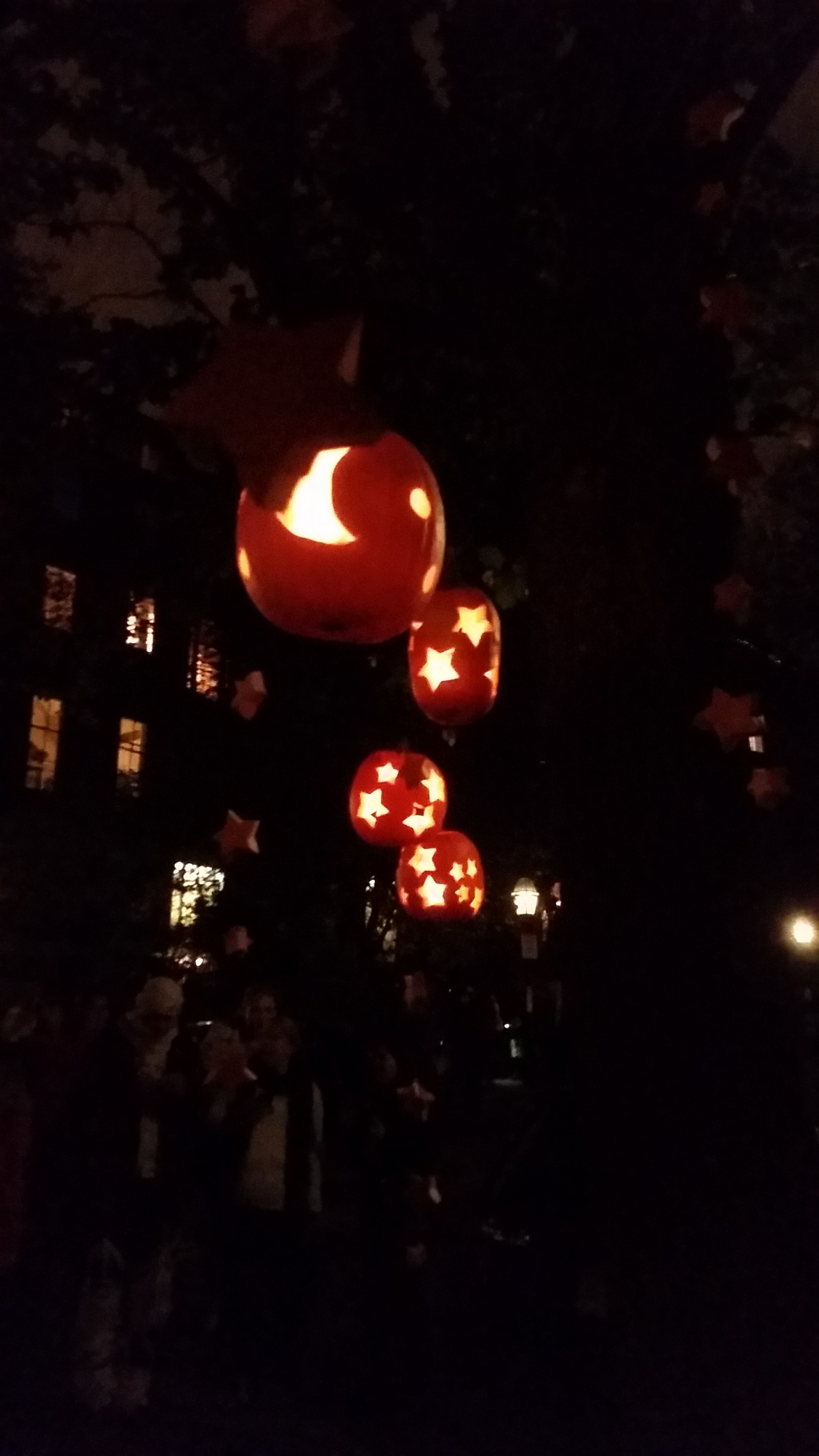 Here are some sketchy pictures I took with my phone. It was getting pretty dark though so some of these are a little hard to see. 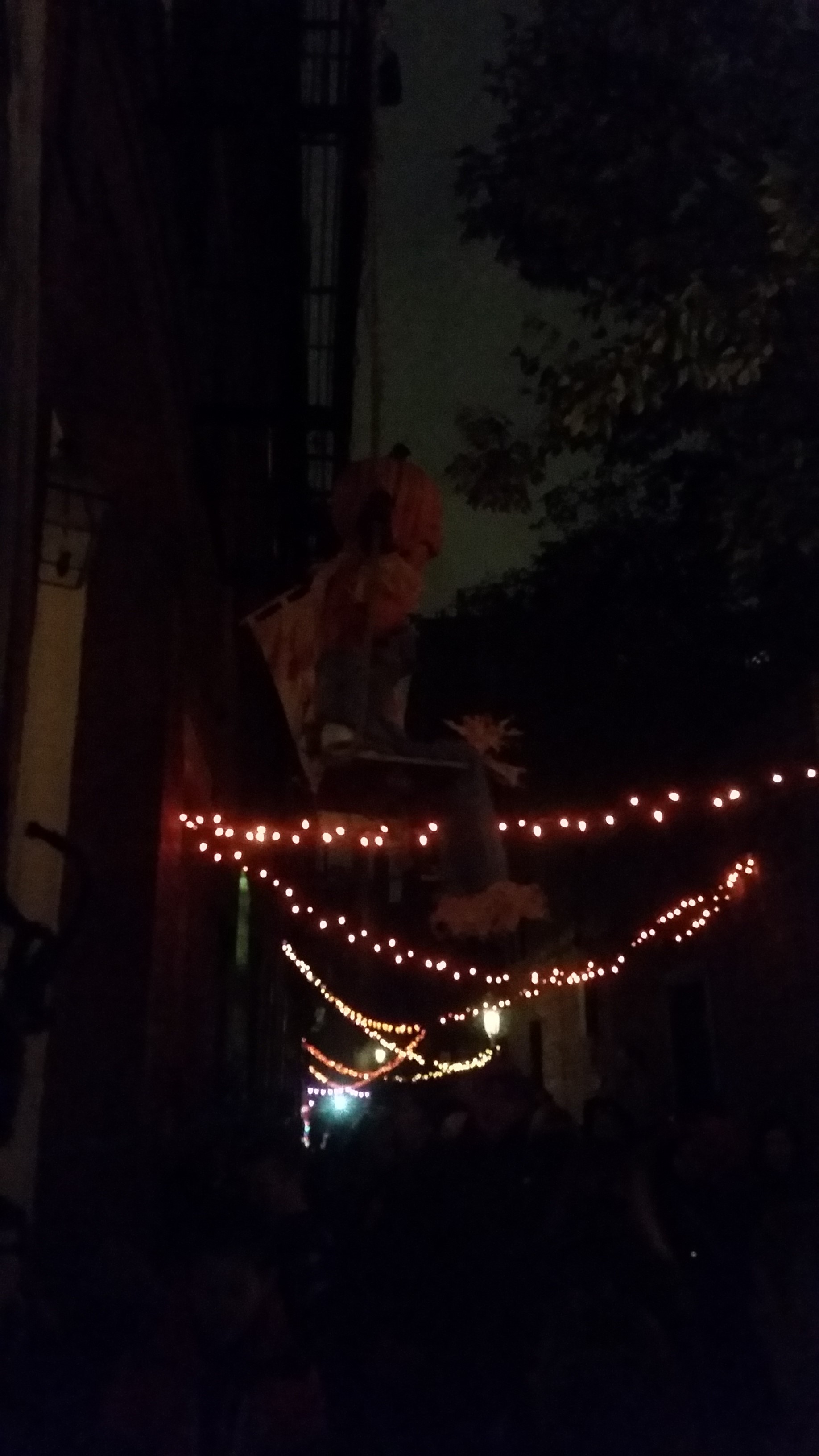 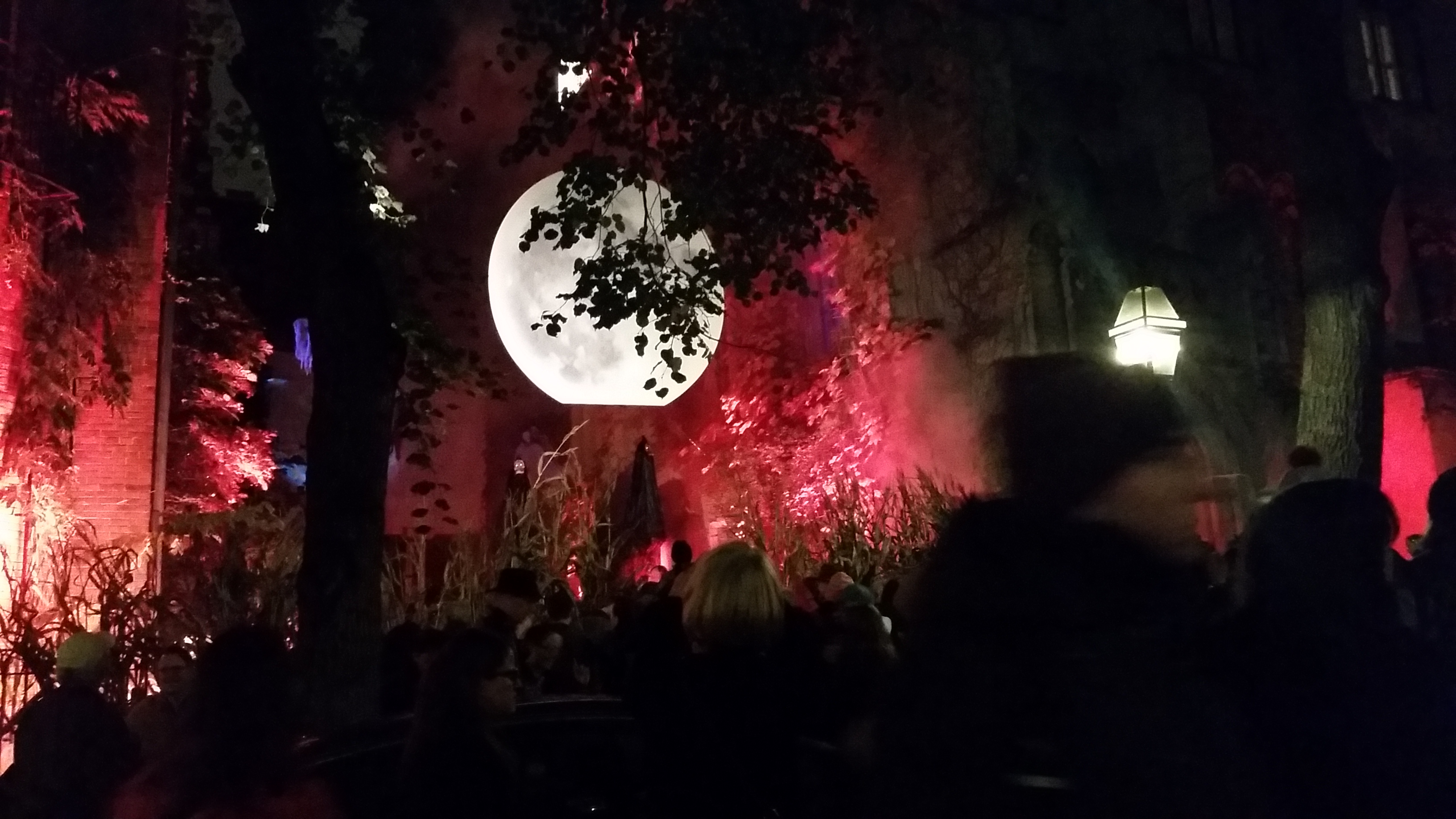 As we approached one particular stoop, we noticed a small hooded statue-like decoration in front of the door. Being the paranoid individuals that we are, we spent a minute or so discussing whether or not we thought it was a person or a decoration. Having decided that it was, indeed, simply an amazing prop, we approached the door for our handful of candy. As Ava asked the stoop-owners whether or not the figure was just a decoration (one can never be too safe), it leapt to life and shouted, startling us and eliciting a scream from Victoria. It was hilarious.

I wasn’t expecting much when I left campus, but to my surprise, the holiday spirit had been infectious. It was nice to feel like a kid again. I had been concerned that we would be too old to be gallivanting through the streets and asking for candy, but there were other college students trick-or-treating just like us. From babies in strollers disguised as giant spiders, to adults dressed in full-sized Big Bird suits, everyone was having a ball, and I was thankful that I was a part of it.

After trick-or-treating, we swung by Chipotle to take advantage of their Halloween $3 deal for costumed individuals, and ate a quick dinner at Cosi, laughing about the night’s shenanigans. Stuffing my face with bread from Cosi was a good way to end the holiday festivities so we headed back to campus soon after.

Sitting in my room now, my sugar intake so far has consisted of four Swedish fish, one peanut m&m, one gummy bear, a fun-sized snickers bar and two dumdums (mystery and strawberry flavored). I’m already sick of candy. Maybe that’s another reason why I’m not a huge fan of Halloween: the sugary currency of my childhood, often the source of intense bartering and trading after a night of trick-or-treating, is no longer of much value to me.

Regardless of how my sweet-tooth has evolved over the years, I had a lot of fun reliving childhood memories and making new ones that I will inevitably look upon fondly in the future and into my elderly years.

Hope you all had a happy Halloween!