Trumpeting for Assassins by Anna H. '14

I get to watch each presidential assassination. Live. Over and over again.

In fifth grade, everyone at my school had to pick an instrument to play in either band or orchestra. We had “tryouts”: we took a shot at playing every instrument in turn, and the teachers would rate us from 1 to 10 (not a clue what they were rating, exactly…how awesome we looked holding that particular instrument?) After the orchestra teacher suggested that “you better be in the band, dear”, and I found that I really don’t like feeling a vibrating reed on my tongue, I shuffled into the band room and picked up a trumpet.

And got a 10. I assume it was for managing to make a sound, since I definitely don’t look awesome when I play the trumpet (take a look in the mirror while blowing up a balloon, and you’ll see what I mean).

Nine years later (NINE YEARS? I’M SO OLD) I signed up to play in the pit orchestra for Assassins, a show performed by MIT’s Musical Theater Guild. The music and lyrics were written by Stephen Sondheim, who also wrote the lyrics for West Side Story. It’s been a year since I last played the trumpet (I brought it to campus with me, but barely touched it freshman year) and I’ve been experiencing a nice, emotional, occasionally painful (my lips hurt!) reconnection with my lovely set of brass tubes.

I’ve also had to play a flugelhorn for the first time. 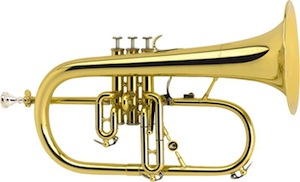 In case you’re unfamiliar with the difference between a flugelhorn and a trumpet, here’s a picture of a trumpet:

They’re about the same length, but a flugelhorn is fatter. It’s like what would happen to a trumpet, if a trumpet ate every day like I ate last night (I had the most ridiculously gigantic plate of fish + sweet potato fries + calamari EVER) .

Brass instruments are fun. I once got a call from our apartment’s porter in London; he said that a neighbor had been phoning in to complain about my trumpet-playing.

Fortunately, no one has complained about my playing here (yet). Most dorms have a music room (as far as I’m aware), which is a little room equipped with a piano and music stands, so I troop downstairs once a day to practice, trumpet in one hand and flugelhorn in the other – and a backpack full of mutes.

Trumpet mutes are some of the funkiest-looking objects ever created. Here are two examples: 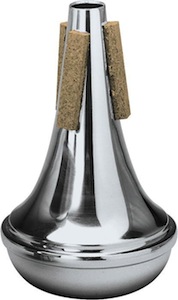 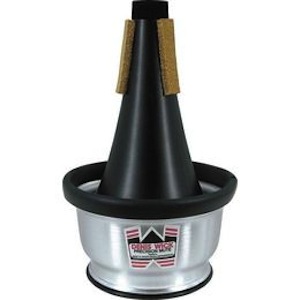 The first is a straight mute, and the second is a cup mute. The brown cork-y part goes into the bell of the trumpet, and mutes the sound in different ways. I was familiar with these two before Assassins, but had never come across one of these before: 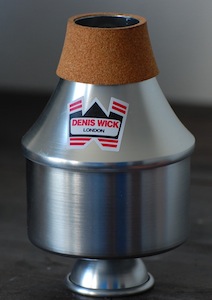 This is a harmon mute, so-named because it puts you in harmony with your neighbors, who can no longer hear your squawking tones*. The little thing sticking out of the bottom (opposite the cork part) is a “stem”. It can be pulled all the way out of the mute body, and music will specify whether you should take the stem out, push it all the way in, or pull it most of the way out.

I puchased the mutes, and borrowed the flugelhorn (from fellow MTG trumpeter Matt P.) the day of our first rehearsal with the cast (the singers) – so I didn’t get a chance to practice before then.

My first act was to place the flugelhorn on a stand that Matt lent me, which looked something like this:

So far so good. When it was time to switch instruments, I dropped the trumpet on my lap, swung the flugelhorn to my lips, blew – and no sound came out. I was silent for the rest of the piece. Finally, I tapped Matt on the shoulder.

Me: MATT! THE FLUGELHORN WON’T MAKE ANY NOISE!

Matt stared at me. He stared at the flugelhorn. He reached his hand into the flugelhorn’s bell and pulled out the stand. He then set up the stand properly, which made it look something more like this: 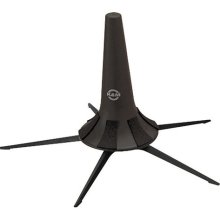 Um…right. I knew that. Thanks Matt.

It was still a bit of a challenge to get any noise out of the instrument, since the amount of air required for a note is different than on a trumpet. Pulling the giant black wedge out of the bell was a good start, though.

The next disastrous incident came during a particularly fast piece, in which I have to switch between mutes (STRAIGHT, CUP, NO MUTE, CUP, HARMON WITH NO STEM, HARMON WITH STEM, STRAIGHT, NO MUTE) at speeds rivalling those of Hurricane Irene.

Like Hurricane Irene, I left chaos in my wake. At one point, I flung a straight mute through the air and nearly hit the guy two seats down. It rolled out a big arc on the floor, and all eyes followed. My trumpet fell over a couple of times. In my frenzy, I smacked the mouthpiece into my upper teeth and threw a pencil onto the floor.

I had been nervous before about playing in front of strangers, and all this flustering didn’t help my situation. Fortunately, my fellow players were patient, and encouraging; Matt kept pressing me to “play out”, and “play with confidence” – and finally, three or four songs in, I did.

Don’t judge MIT’s performing arts scene on my klutziness! You’ll be surprised (and, if you’re like me, a little overwhelmed) to learn that that we have, here on campus, over a dozen dance groups, a couple of literary societies, and a zillion musical and theater ensembles.

The MTG singers are fantastic. The rest of the pit orchestra is fantastic. The show will be fantastic. Performances begin on September 2nd and run for a couple of weekends, so you should check out the schedule and come see MIT’s performing arts in action! Freshmen, as a helpful commenter pointed out, tickets are only $3 for you, so take advantage of your discount :)

I promise that my mute-flinging days are over, so don’t worry: your face has nothing to fear.

6 responses to “Trumpeting for Assassins”