An ode to the MIT tunnels

Full disclosure: Regarding the tagline: I have no idea how to write an ode. To be totally honest, I’m not even really sure what an ode is. I googled “how to write an ode” but then got distracted by one of my 39 tabs open in Chrome (which is apparently the threshold at which the symbols on the tabs disappear and you have no idea where you are clicking anymore), so now in an effort to get this post up, I’m just going to wing it. Sorry guys. Hope you didn’t have your heart set on a real, live, poetic ode.

As a freshman, I would, on occasion, hear people talking about the MIT Tunnels. Back then, it was tunnels with a capital “T” because to my uninformed self, they seemed foreign and special and important. I was under the impression that they were tunnels in the most adventurous sense of the word: cavernous cement cylinders wreathed in shadows and coated in a moldy film of dampness, perfect for piercing flashlight beams and a spirit of discovery. Or maybe one of those side-of-the-mountain tunnels with walls of dirt, a carpet of moss, rocks, and spiders the size of your face.

What I was not expecting was a carbon copy of the infinite, just one floor down. 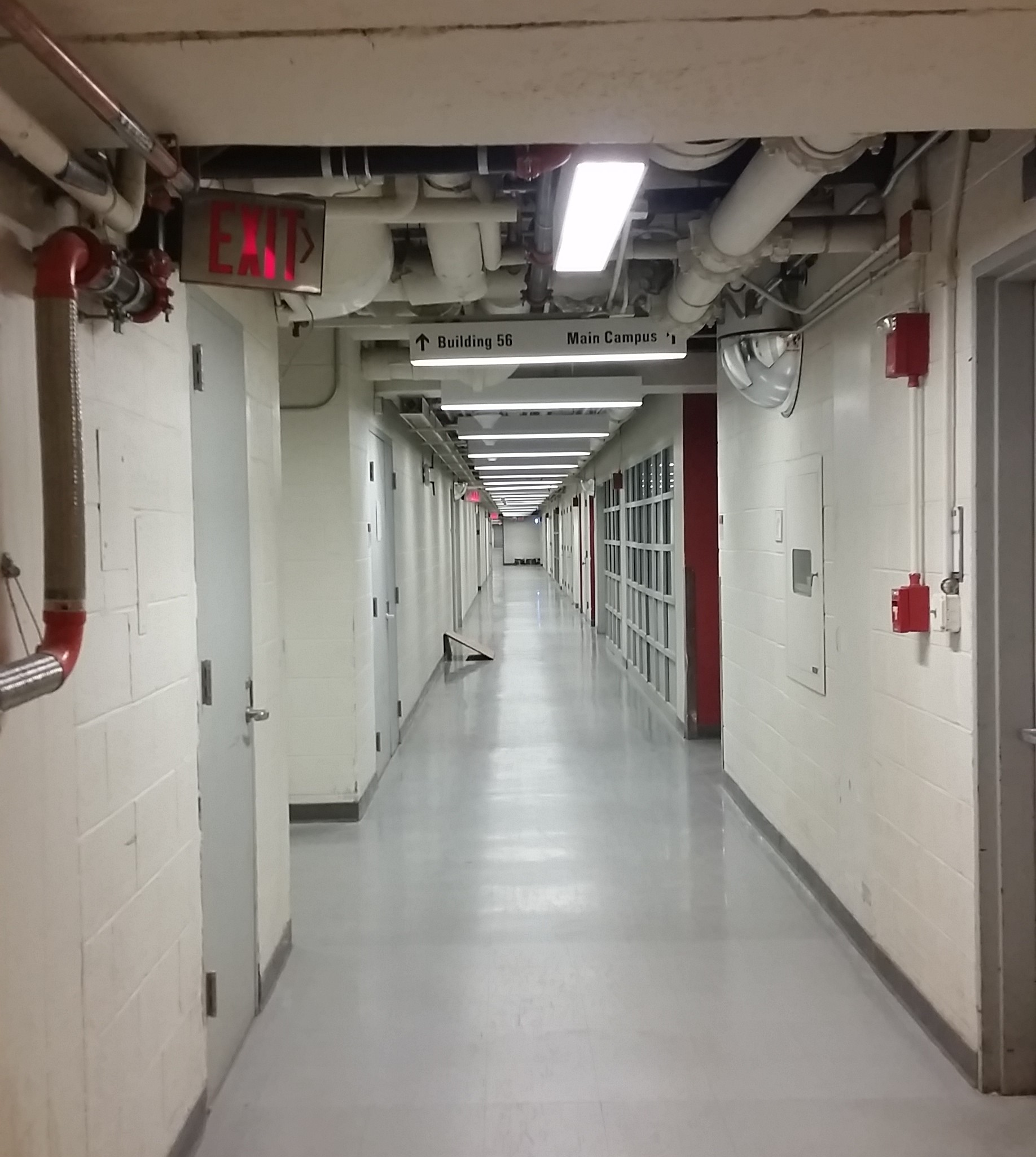 The tunnels being totally and uninterestingly benign. No face-sized spiders in sight.

Most of the staircases in the infinite (if not all, I’m not sure) lead to the tunnels. It’s the same tile, the same white walls, the same door-shaped doors. It wasn’t even as excitingly labyrinthine as I thought it would be. There are convenient signs above the hallways at every crucial junction or fork in the road, plus tiny maps at the intersection of buildings with helpful “you are here” symbols. 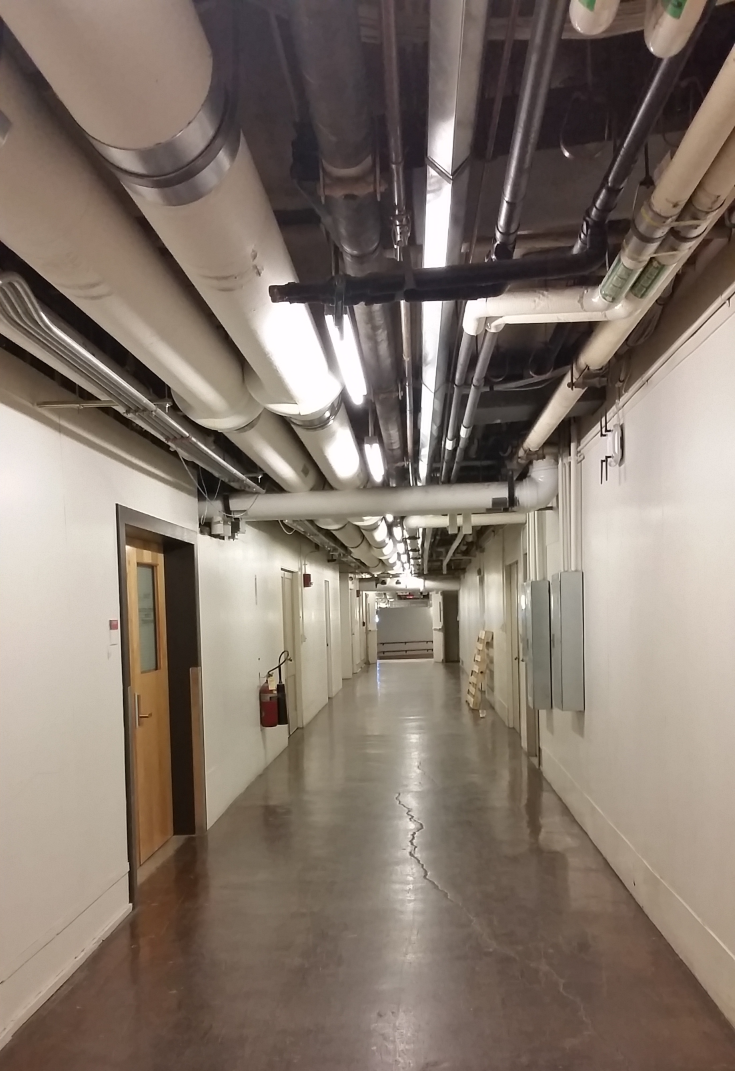 At least there are cool pipes on the ceiling.

I’m not complaining or anything. Just putting my own initial disillusionment out there for the sake of all you adventure-y dreamers out there. Unless you plan on going hacking, the tunnels are wholly normal.

On the otherhand, disillusions aside, the tunnels are amazing from a practical standpoint. Here’s why:

1. Protection from the elements

If you remember my last blog post (https://mitadmissions.org/blogs/entry/thirteen-things-to-do-over-iap-1-5), I spent the first half of IAP in sunny California where 50 degrees is “freezing cold” and we break out our winter coats. Unfortunately, despite being amazingly prepared to bask in the sunshine of the West Coast, I was rather less prepared for the return trip. I flew back in jeans, a T-shirt, my trusty sweatshirt, and a pair of Converse sneakers. The woman sitting next to me looked rather alarmed as I was preparing to deplane and inquired as to whether or not I had a winter coat to go over the rest of my wardrobe. I said no. We exchanged sad and knowing smiles. Then we parted ways.

After taking the Silver and Red Line back to Kendall/MIT station, I noticed the ground covered in a blanket of soft, powdery snow. At first, I balked at the idea of walking all the way back to Maseeh with no snow boots, no coat, and no protection from the biting wind chill. But thankfully, I remembered the glory of the MIT tunnels and only had to run across the street and down half a block into building E25 which is right next to MIT Medical. From there, I descended into the tunnels and resurfaced in front of 77 Mass Ave at the other end of the infinite.

It’s especially nice during the winter/blizzardy seasons to be able to walk indoors from dorm row to the Kendall T stop or any of the buildings on that side of campus. I’ve used the tunnels quite a few times to avoid snowy weather, mostly because I still have yet to purchase water-proof boots, gloves, or generally appropriate winter clothing. I love, love, love the cold, but even I know it’s not healthy to dig snow tunnels or make snow angels with wet jeans, wet socks, and exposed extremities.

2. There’s stuff down there

The tunnels are not just tunnels, in the strict transportation sense. Perhaps most useful is CopyTech, MIT’s student printing and copying service hub. I have come down here to get larger, color posters printed for event publicity and I’ve been told that you can also use CopyTech to get papers bound such as for making a notebook, or maybe consolidating class notes. Upon further investigation (-cough- google), I have discovered that you can also go to CopyTech for design consultations, MIT business cards, and advertising in the infinite. Also, Costco membership cards on loan. +1 for free samples.

Underneath the biological engineering building, there is also a store room in the basement that sells reagents, equipment, and other laboratory needs for the convenience of all the labs in the vicinity. It’s where I got my very first laboratory notebook (it was forest green and oh so beautiful) so it holds a very special place in my heart.

Furthermore, there are a lot of offices underground, as well as some labs and workspaces, including the room in which students can learn glassblowing over IAP. I’ve also passed by the MIT biomimetic robotics lab that works on “cheetah-inspired quadrupeds” which I thought was pretty neat.

Even in non-wintery situations, the tunnels can be useful as an alternative path. Sometimes the infinite can get clogged with tourists or even with students during the five minutes right before the next round of classes starts. I have not personally used the tunnels for this purpose, but I imagine if there is ever a day where I don’t have the patience to weave around little kids and camera flashes, I’ll remember my good friend, the MIT tunnels.

Taking strolls through underground tunnels is always buckets of fun. There’s even a special part of the tunnels underneath building E18 that smells suspiciously of mice habitats. Hooray.

But the best part of all?

And so, to the MIT tunnels:

Don’t let the fact that I’ve demoted you to lower-case status change our wonderful, blossoming relationship.