Recently on @mitadmissions I asked what kind of blogs people wanted to see and one of them suggested that I talk about how I personally destress! Also, this is actually just an excuse for me to talk about the Gamer Men I simp for. 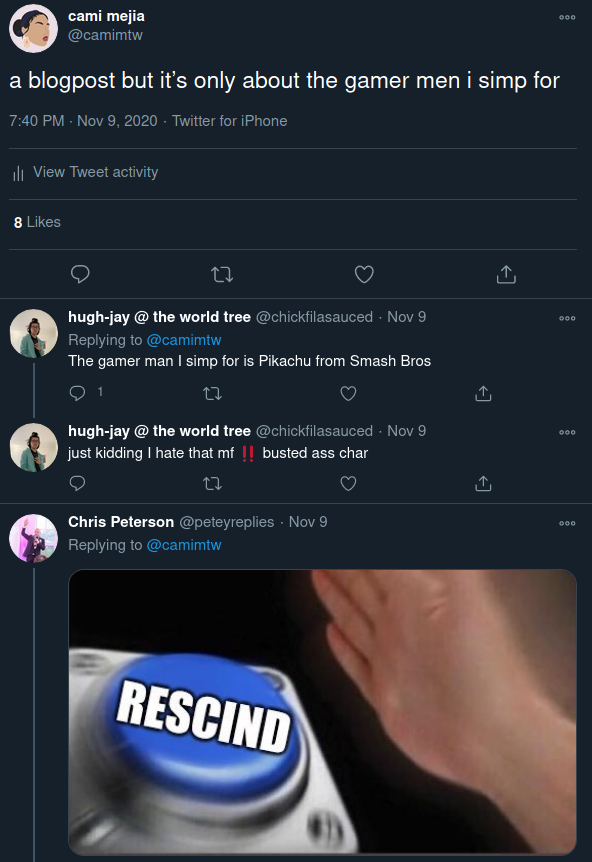 In middle school and a little bit of high school, I was an avid YouTube and Twitch enthusiast. I found my little niches in the realms of the vlogging world, enjoying the likes of Dan and Phil and other creators within the British Youtube sphere, alongside enjoying Minecraft YouTube. This was the first coming of Minecraft YouTube, with names like CaptainSparklez, SkyDoesMinecraft, JeromeASF, and really, all of TeamCrafted dominating the YouTube charts. Then, Minecraft died and so did TeamCrafted and the genre really struggled. As Minecraft was dying, I leeched on to other creators, mainly going to the indie gaming community. I took a particular liking to rogue-likes, playing and consuming hours and hours of games like Binding of Isaac, Spelunky, Shovel Knight, and more.

And then this phase died as I entered my Tumblr stage and joined the ranks of bandom and One Direction stan Tumblr. But as many of us are experiencing, the pandemic and quarantine has made me revert back to my middle school days and I find myself crawling back to YouTube and Twitch like the gremlin I am. So here’s a comprehensive list of all the content I’ve been consuming. I really enjoy doing these media dumps, and I hope you like reading them, too!

So, I’m a bit late to the OfflineTV train. OfflineTV is a group of content creators (mainly gaming content, save for the exception of Michael Reeves) who have been on the YouTube and Twitch train for quite a bit. You might recognize names like Scarra, a retired pro-League player now turned TFT and Genshin streamer, or DisguisedToast, originally reaching fame through Hearthstone but now really known for his Among Us 400IQ moments. I’ve found a lot of comfort in OTV content. Being so absorbed into social media for so long, you start realizing the patterns in how mapped out and scripted every big moment is. Every celebrity encounter or tweet sounds a little too formatted and you start to realize that overall these big celebrities are a brand. But, while OTV is very much a brand, they’ve offered some temporary relief from this harrowing realization in that their online personas and interactions with each other feel very genuine. I might be being naive by saying this, but it’s just very refreshing to have a group of content creators that are actually genuinely friends.

I have this crazy dream of inviting OTV to give a talk at MIT because I think it would be really interesting to hear about their experiences, but obviously I have no good reason to actually make this happen. But this idea lives rent-free in my head.

I also consume a lot of the “OTV-adjacent” creators like Sykkuno, xChocobars, fuslie, Masayoshi, Ryan Higa, Sydeon, and more. I think it’s so cool to have so much Asian representation in the gaming and streaming industry, a field where you don’t really see that all too much.

I also really enjoy the creators I’ve discovered from the Among Us lobbies. CORPSE is by far one of my favorite streamers and I think he just deserves his own line and recognition in this blog post.

I’ve found that it’s really hard for me to work without a stream on in the background, where the chatter and video game noises and music serve as good extra noise to help me concentrate.

I was absolutely enthralled to see this second coming of Minecraft. Originally stemming from Pewdiepie’s Minecraft series, the Minecraft renaissance and revival has given us such. Good. Content. I’ve recently gone down the Dream Team rabbithole, where the Dream Team consists of Dream, famous for his Minecraft Manhunts and Speedruns, GeorgeNotFound, and Sapnap. This ragtag friend group then made way for the Dream Survival Multiplayer Server (Dream SMP), where they invited other close friends in the Minecraft community to play on a server with them. My particular favorites are Tubbo, TommyInnit, and WilburSoot.

But what makes the Dream SMP stand out to me is the strange, weird worldbuilding and roleplaying that happened seemingly out of nowhere.

While the history of the server is kind of lengthy, the members of the Dream SMP have made some kind of lore and storyline for the server and often get together to get into their “roles.” It involves a lot of stealing of land, destroying of lands, overthrowing of kings, betrayal, murder, plotting, etc. It’s actually…really fun. While it’s kind of janky to see a bunch of Minecraft men standing around a circle and shooting each other with arrows to reclaim their stolen land, the fandom actually worked to create realistic animatics to recap all of these stories.

I love, love, love, LOVE these animatics. More than you know. They made me so invested into this stupid roleplaying and I know the storyline of the server by heart and I am just in love with the dramatics of it all and the world they’ve built.

These animatics have genuinely..made me want to get back into writing and reading again. Which sounds absolutely crazy but I am legitimately inspired by this nonsense and fun and world they’ve created and I just have an itching to write and create. It’s strange because I really didn’t expect myself to become so attached to Minecraft YouTube again, but honestly watching their content has reminded me of why the game is so popular in the first place, the magic of being reintroduced to it, and the genuine fun that can result from it.

Now this. This encompasses the Minecraft Renaissance perfectly. This is a monthly competition hosted by content creator Smajor and the Noxite crew where they invite popular Minecraft YouTubers, place them on teams of 4, and have them compete in events for the title of Minecraft Champions for the month.

I was a bit skeptical when I first heard of this, but their execution is amazing. It’s incredible watching teams strategize and even practice days or weeks before the competition. Some people have specializations in their favorite events, whether it be PvP, Parkour, Survival, or Building. Others serve as jack of all trades and score decently in all areas. It’s so fun watching teams mix and match, seeing the chemistry between different YouTubers/streamers you didn’t think you’d ever see interact. It’s one of my favorite Saturday activities: bundling up in my bed, turning on the TV to put on a streamer I feel like watching, and cheering on my favorite teams for the next five hours.

Taking a shift to television, here are some of the TV shows I’ve been watching. Raymond was really into chess for a bit (you can check out his chess website here) and so I suggested we watch The Queen’s Gambit since it’s a chess centered drama, which seems totally up his alley.

Our roommate Emma has been really obsessed with Love Island, so she insisted we all had to watch it, so we’re steadily making our way through it. For those of you who don’t know, Love Island is a British dating show where a group of people live at a villa for the duration of the season and couple up in an effort to be the last couple standing and win the prize money and, most importantly, ~find love~.

The entire show is really hilarious, albeit frustrating at times, but it’s definitely just a fun mindless source of stress relief for all of us.

I’m a bit slow to hop on the Lost train, but Raymond said I would really like the show so we’re making our way through it. I’m only on Season 2, but honestly this show makes my blood pressure increase so much and it actually might cause more stress than it relieves. But it’s an intriguing storyline (for now, I hear it goes to shit later on).

Raymond and I are both pretty into roguelikes. We recently picked up Hades, a Greek mythology centered roguelike best played on a controller. The game is a rogue-like dungeon crawler where you are the prince of Hell and son of Hades, Zagreus, trying to escape and reach the surface to uncover the mystery of what happened to your real mother.

Along the way, the Olympians provide you with support in the form of Boones, upgrades you earn at the end of defeating a room that modify or boost your Dash, Special Attacks, and Regular Attacks. The game is incredibly addicting, and also has really fun character designs and personalities within it. There’s a feature in the game where you can unlock more things by building your relationship with the characters, so you can gift Nectar to Gods or your friends in the Underworld.

I’m horrendous at the game, but I’ve been trying to watch a lot of streamers play Hades so I can try and pick up a few things here and there about them. This was originally how I got so good at Isaac, where I would just watch streamers hours and hours on end. I find myself actually going back to the same streamers I watched back then, like Bananasaurus_Rex, CobaltStreak, Bisnap, and McLaffyTaffy to watch their gameplay and here their explanations for the choices they make.

In an effort to find a nonstressful co-op game (Raymond and I tried to play Overcooked 2 and…whew.) we bought Enter the Gungeon, a bullet hell rogue-like dungeon crawler that gives me strong Binding of Isaac vibes. It’s a twin-stick shooter, which may be why it emanates such vibes.

The game is full of quirky fun items, cute characters, NPCS, and enemies, and wonky hidden extras that make the game incredibly addicting. I don’t have much to say since we only purchased it a couple of days ago, but the game is really charming. Since Ray and I play co-op, I often play the second player, and if I try to interact with the main storyline, I’m often told to fuck off by the NPCs because I’m “not the protagonist.” There’s a lot of other chuckle-inducing moments like this that make the game so lovely and I’m just really excited to improve at it. I’m struggling a bit with it since I’m very much a keyboard player, and we bought Gungeon for the switch and use the pro controller with it, so it’s a hard adjustment. But overall, really happy with the purchase.

Our apartment gym recently reopened and I’m really excited to get back into it. I turned into an avid gymgoer upon coming to MIT, where I took MIT’s Intro the Weightlifting for Women PE class that was really helpful for getting me into it. I then built upon what I learned by asking for my friends’ help, people like Aidan, Aiden, and Raymond. And soon enough, I was popping by the Z six times a week to lift.

With the closing of gyms, I then sought out other ways to exercise, mainly turning to bodyweight exercises through influencers like Chloe Ting and Pamela Reif, although I prefer the latter a lot more for her weekly schedules.

But now that the gym is open, I’m starting to get back a bit into lifting heavy metal again, trying to build back up to where I once was, and it’s been so, so fun! I’m sore all over, which shows how weak I am now, but I’m hoping that over the next couple of weeks I’ll be okay.