Walking alone ’cause the night is dead.
Crossed my mind when I crossed the bridge.

Yet whenever I cross the river
On its bridge with wooden piers,
Like the odor of brine from the ocean
Comes the thought of other years.

Henry Wadsworth Longfellow, “The Bridge”⁠02 trivia: the Longfellow Bridge, which carries Red Line trains from Kendall/MIT to Charles/MGH, is named as such because of this poem.

This IAP⁠03 the <em>Independent Activities Period</em>, where MIT people can do <a href="https://mitadmissions.org/blogs/entry/a-salty-iap-post/">"whatever they want."</a> has been fantastic in a lot of different ways. I’m back in Cambridge, I did a micro-internship⁠04 this is a program run by CAPD which has, in the past, been called the "externship" program. i did an externship last IAP, and you can actually find me in a photo in <a href="https://mitadmissions.org/blogs/entry/independent-activities-period-part-2/">this post</a>! at a digital publication working on real, creative stuff, and since my micro-internship was only 25 hours a week, I found myself with a bunch of extra time to do essentially whatever I wanted, which is sometimes hard to find at MIT. I’ve kept up with people and even found time to do some additional fun things, like Mystery Hunt.⁠05 there will be many blogs about this soon!

But to say that everything has been sunshine and roses would be lying. I’ve never been very good at identifying when I’m feeling worse than usual, especially if that feeling develops over a longer period of time. Instead, I tend to lean on a series of tells. If I’m listening to music more than I’m listening to podcasts, it might be because I’m too overwhelmed to process new information. If I’m struggling to maintain a sleep schedule, it might be because I don’t have the requisite spoons at the end of the day to force myself to go to sleep. If I’m constantly trying to reach out to friends just to talk, it might be because I’m feeling alone, in spite of my general introversion.

Every single one of those alarm bells has gone off this IAP.

As an engineer, my first instinct is to try and problem-solve. Usually, this works—I’ll figure out what the source of the stress is, and correspondingly eliminate or mitigate it. This time, however, it’s not clear to me what the source is. I try to stare into the void occasionally, introspecting and trying to determine what’s wrong, but the problem always seems to slip around the corner, unwilling to give up its secrets. Frustrated by the lack of cooperation from the void, I’ve started going on walks—occasionally, with people,⁠06 and by people, I mean CJ. but usually alone. Sometimes I call or text⁠07 i am very good at texting and walking. one of my friends disagrees with this claim and keeps telling me that i will eventually walk into a pole. people—my parents, my friends, a Discord channel—but usually I just listen to my trusty Spotify playlist.⁠08 this playlist has actually has a lot of lore behind it, which i'll omit for now.

The walks have been nice. On weekdays, I usually finish working around 4:30 or 5 PM, so I catch the sunset on my way out. Some of the sunsets have been pretty spectacular:

I always have a destination or objective in mind for my walks, chosen to be walkable within the timeframe that I have. During the week, this is usually two hours or so, to make sure that I can get back to Next in time to eat dinner. Here are some examples of objectives:⁠09 in some cases, i took the MBTA home, and in some cases, i walked back. the latter are denoted with 'roundtrip'. the distances here do not include walking from Kendall/MIT back to Next when necessary, which is an additional mile or so.

The moments in my walks I’ve enjoyed the most, however, are rarely the destinations. Instead, they’ve been the moments in-between, where the music blends with the sounds of the city around me, and I can look around and say, “Wow. I am here. Isn’t that nice?” And, although, sometimes, as the introductory song and poem suggest, I use the time to think, most of the times, my mind is simply empty.⁠10 head empty, no thoughts.

As a sort of culmination of this, I walked 15 miles last weekend, from Next House to Bedford, along this bike path known as the Minuteman Commuter Bikeway. It was cold, and it was windy, and I had brought the wrong jacket for the circumstances. The first four miles of the trip stayed within Cambridge; in fact, I had walked the path just a few days before. 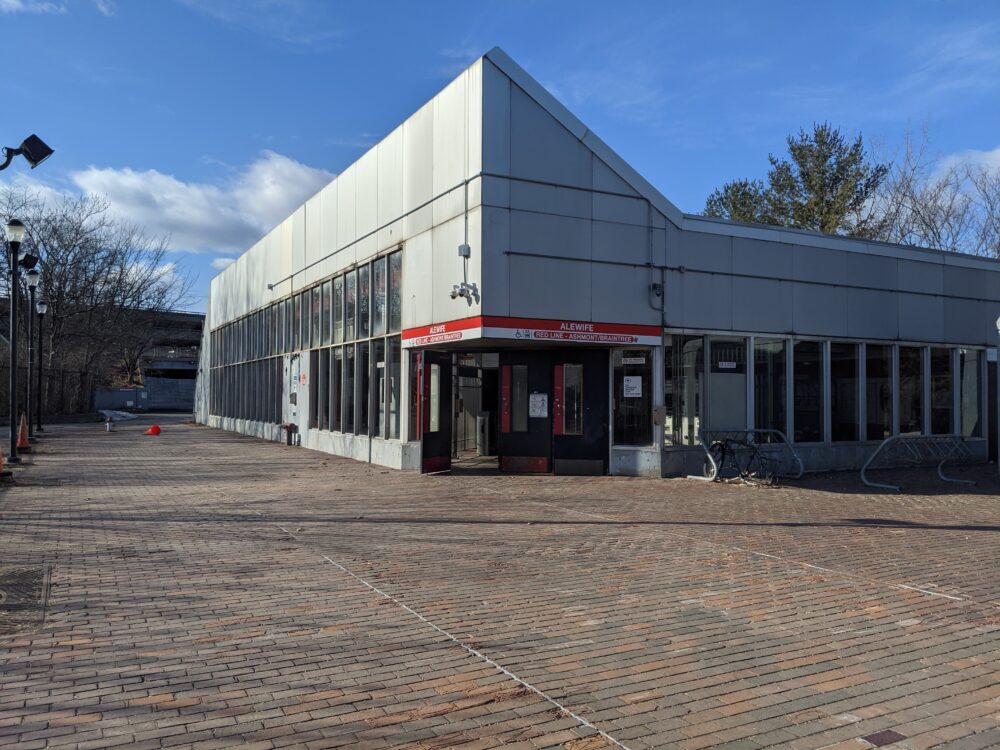 I got to Alewife within an hour or so. I considered stopping there—I had already done a good amount of walking, and my hands were freezing. It would have been easy to tap into the station right then and there, and to take the Red Line train back to MIT; back to safety, back to comfort. But I also knew that if I did that, I would be back in that perpetual state of general malaise.

So I kept walking. I passed through Arlington first, and then Lexington. On my way, I thought about the IAP before this one; about going to work in Kendall everyday, and making food with friends every other evening. And, briefly, I missed it. But just as walking forwards along a path changes the sights, so does moving forwards through time, and so I continued on, buoyed by joy of the memories, but not restrained by their loss.

I took in the sights along my path, and I pushed myself forwards, half-mile by half-mile, hour-by-hour. After another three long hours, during which the sun had slowly descended to the horizon, I finally—finally!—reached Bedford. 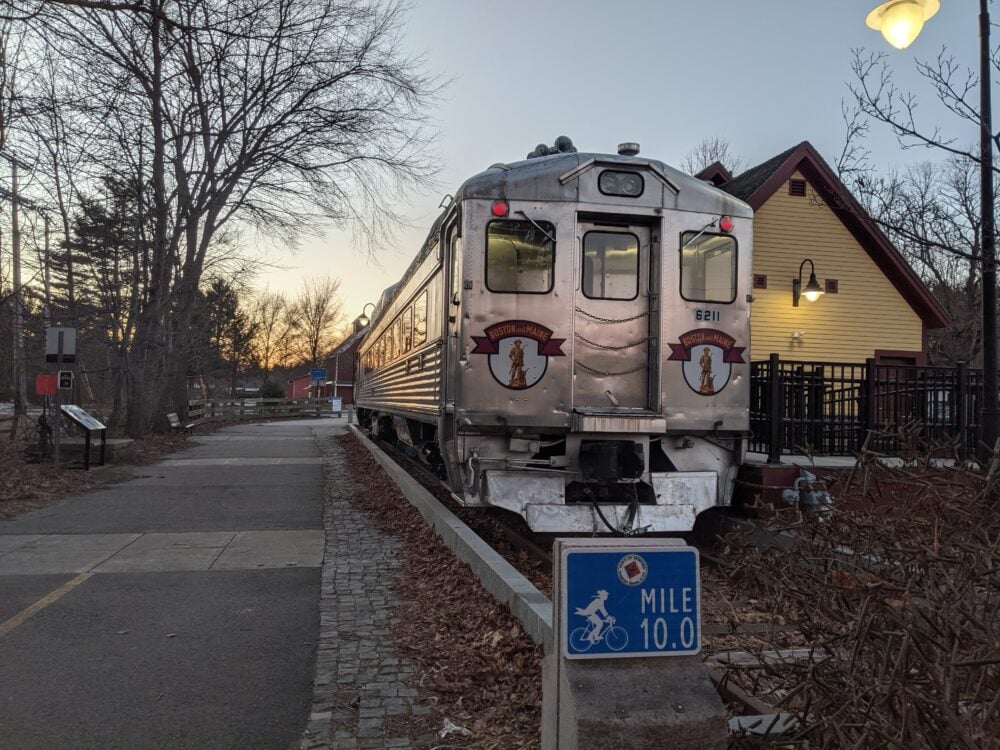 There wasn’t much to see in Bedford, except for this old train and a 10 mile marker. I quickly found my way to the bus stop shelter, and waited for the hourly 62/76 bus to take me back to Alewife. At Alewife, I transferred to the Red Line, and then I hobbled my way through campus from Kendall/MIT back to Next House.

Reaching the end of the trail didn’t feel like a particularly exciting achievement after hours of walking in the cold. And I can’t say that I came up with anything insightful⁠11 or, to be honest, if there's anything insightful or valuable inside this post apart from the pictures. during my walk to Bedford. But, at the very least, I had been at peace for those four hours, listening to music, beating on against the winter wind. 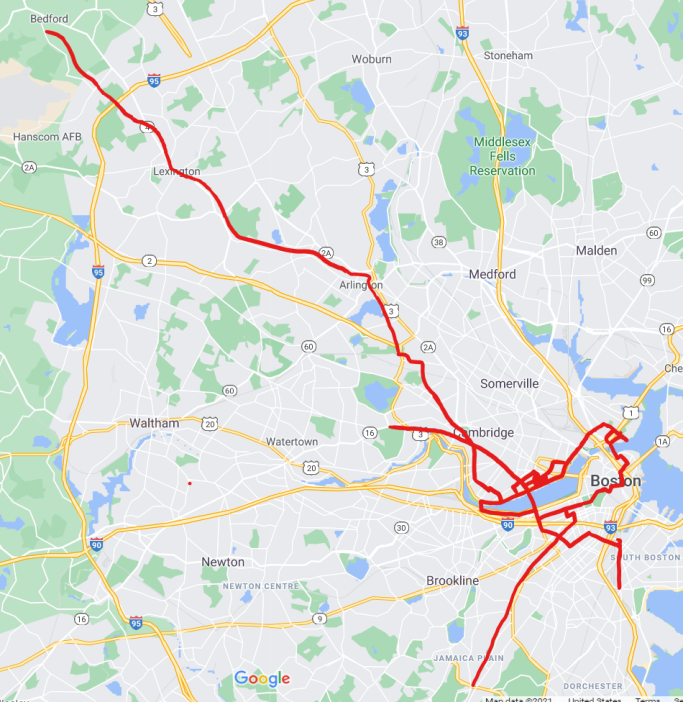 My micro-internship just wrapped up, but there are still two weeks before school starts up again. In the meantime, however, as long as the weather holds out,⁠12 my tolerance for cold weather is pretty good, but probably not sub-20° F good, especially with wind. I’ll be going on more walks.