And getting into summer programs.

I woke up Thursday morning, realized it was March 1, dove off my bed, and flung my laptop open. Gmail couldn’t load fast enough. There it was: The E-mail I’d Been Waiting For.

“I am pleased to offer you an appointment to The NRAO Summer Student Research Assistantship Program at the NRAO site in Charlottesville, Virginia. Your research topic will be “Pulsars”…Please confirm acceptance of this offer by 5:00 PM (ET) on Thursday, March 8, 2012.”

I confirmed acceptance a lot sooner than that, and spent all of Thursday grinning like a crazy person.

The NRAO is the National Radio Astronomy Observatory; they have a student internship program that I’ve been dying to do since forever. I applied last year, but didn’t get in – which makes this doubly sweet. I’ll be there for 10-12 weeks, hanging out with astronomers and scientists and studying pulsars. PULSARS!!! I can’t wait.

Twisted as this sounds, the reason I haven’t posted in forever is because I have TOO MUCH TO POST ABOUT. The musical came and went, I registered for The Most Awesome Classes Ever, I started a UROP, I shadowed clinicians, I joined the Burchard Scholars and Arts Scholars programs, I’m taking a drawing class through the Student Art Association, my wisdom teeth rebelled against me and I spent four days in pure agony before seeing a dentist and finding out that I need to get all four of them removed…

And so on. Each could take an entire blog post (except maybe the whole tooth thing, since, let’s be real – who wants to read about my wisdom teeth?) While they’ve been piling up (the post topics, not the teeth) I’ve been fretting about picking one to write about; while I fret, more pile up, and the Cycle Of Silence continues.

I’ve finally picked a story, though. This is about how to look at things.

A couple of weeks ago, my dear friend Davie – who is a super expert birdwatcher – invited me to go on a “birding” trip with him. Basically: we were going to go look at birds, through binoculars and “scopes” (Davie told me that if I made the mistake of calling it a “telescope”, the other birders would judge me.)
Now, I’ll be straight with you. I knew nothing about birds. Nothing. Prior to the trip, all creatures with wings were divided into five categories:
(1) Birds that have pooped on me (I’m looking at you, demon pigeons)
(2) Birds at the zoo or the Harry Potter set (owls are SO CUTE. Also, penguins. And flamingos. And miscellaneous birds of prey.)
(3) Birds that steal my food (seagulls, geese, and swans)
(4) Birds I eat (chickens, turkeys, ducks)
(5) Birds that make movies and tourist attractions spookier (ravens, crows)
Note that this is not a particularly scientific classification system. I was excited to learn, though slightly less excited when my alarm rang at 5:55am on Sunday: one must rise early to catch the early birds (literally. sorry, couldn’t resist.) While Davie and I were packing our lunches, we realized that we were running late for our 7am pickup. We SPRINTED down the river (which is NOT pleasantly warm at 6:50, let me tell you) and made it just in time. Our driver was Linda, the trip leader: she has been birding for decades, and has recorded sightings of over eight hundred species of birds.
Over eight hundred species of birds.
How does one accomplish such a thing? By learning to see. All the exotic habitats in the world wouldn’t do you any good, if you didn’t know how to look at birds. Linda’s 800 bird count only takes into account those that she’s seen in North America – this isn’t even counting those that she’s seen in the Galapagos. This knowledge of how to look was, I realized during the trip, what distinguished the experienced birdwatchers from me.
For example: our first stop was the fishing pier in Gloucester, MA. 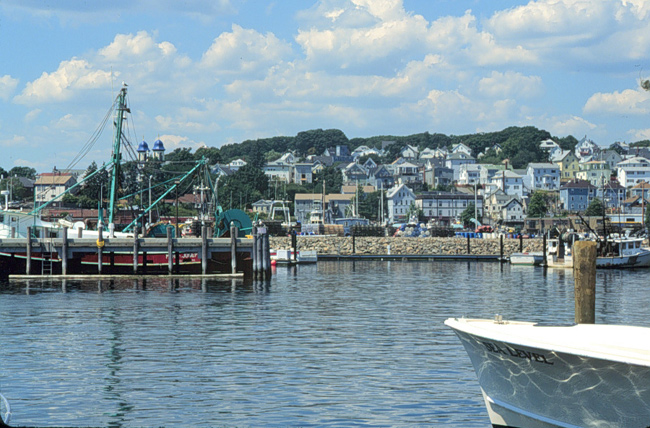 [Image stolen from the Internet. I’m an idiot and didn’t bring my camera.]
We piled out of the car and into freezing salty wind. Noses running, we set up the scopes and I brought a pair of binoculars to my eyes. Linda gave instructions to “start scanning”, which I took to mean “point your binoculars to the ocean and speak up if you see something interesting.” I scanned and saw: ducks. Davie and Linda scanned and saw: Mallards, American Black Ducks, Gadwalls, Ring-necked Ducks, Common Eider, Greater Scaup, Harlequin Ducks, Long-Tailed Ducks, White-Winged Scoters, Surf Scoters, Black Scoters, Red-Breated Mergansers, Common Goldeneye, and Buffleheads.
Compare the Red-breasted Merganser, the Harlequin Duck, the Surf Scoter, and the Common Eider: 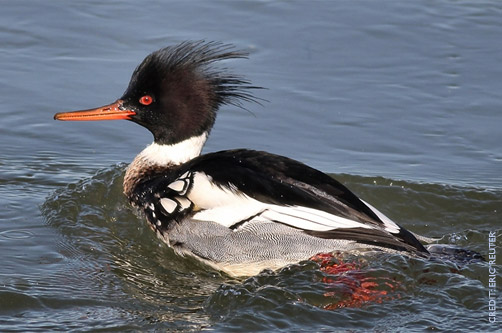 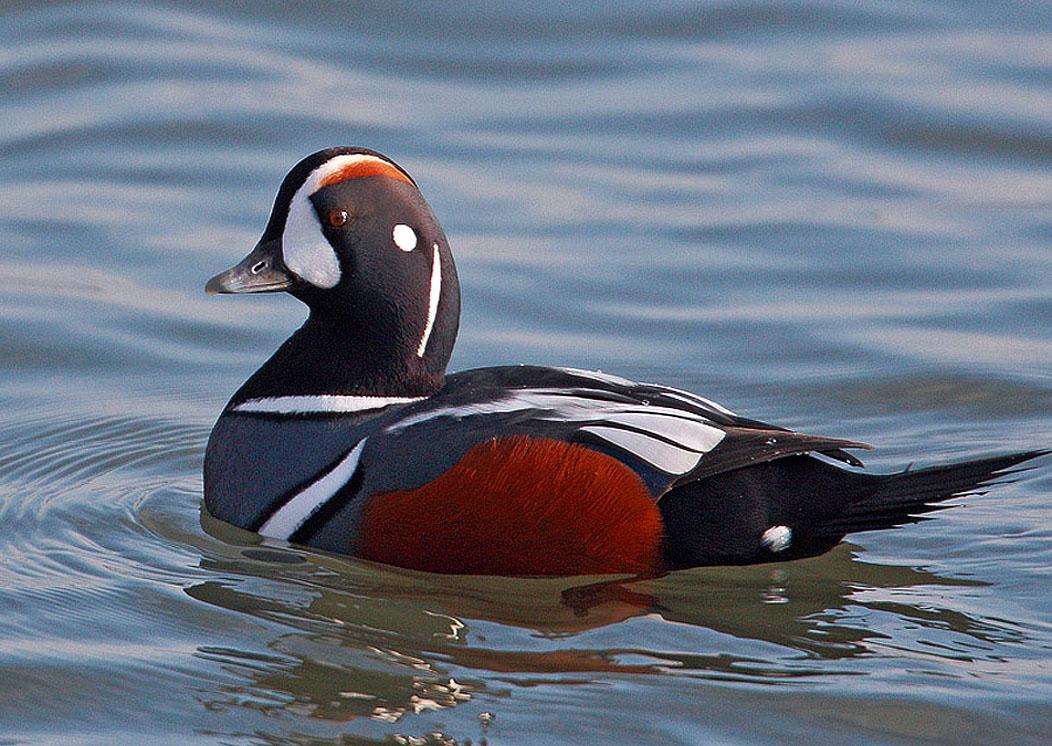 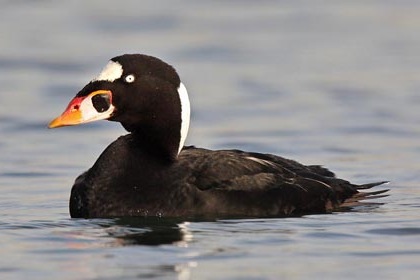 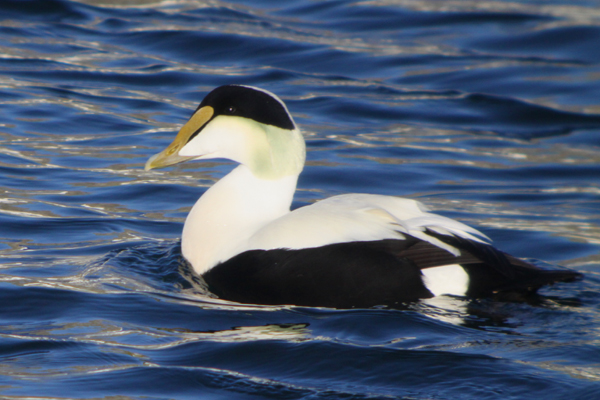 With all this miraculous diversity laid out before me, I saw: “ducks.” Isn’t that sad? It’s hard to see something you don’t know exists.
After the rest of the birding group (~8 other people) arrived, we moved on to a second spot by the pier, and set up again. I saw: seagulls. The rest of the group saw: Herring Gulls, Glaucous Gulls, Iceland Gulls, Black-backed Gulls, and Bonaparte’s Gulls. I learned that Iceland Gulls and Herring Gulls are about the same size, but Iceland Gulls are all white. Glaucous Gulls are huge. Black-backed Gulls have, well, black backs, and Bonaparte’s Gulls are tiny with black spots on their faces.
You get the idea. Wikipedia lists 55 species of seagull, and to be perfectly, brutally honest with you, I did not know that there was more than one kind of seagull. Because I didn’t know there was more than one kind of seagull, I could only see one kind of seagull. After the other birders described the differences to me, an incredible change came over my visual system: the distinctions in color and beak shape and size became obvious. Later in the day, we were trying to determine whether a bird was a Bonaparte’s Gull or a Little Gull; Linda showed me a picture of each, so that I could help judge. I actually laughed out loud, thinking she must be joking around. The birds looked exactly the same – until Linda pointed out that one had a black stripe on the top of its head, and a differently shaped beak. Beak shape! It hadn’t even occurred to me to look at beak shape. I didn’t know there were different beak shapes. After that, it was obvious that the bird was a Bonaparte’s Gull, and we came to a consensus.
Being an expert birdwatcher isn’t just about making distinctions – it’s about being excited about those distinctions. So excited that one is willing to make them in conditions that, to quote Davie, “change your understanding of what it means to be cold.” It was really cold out there, but the birdwatchers still eagerly called out their observations, through runny noses. It was beautiful: the birdwatchers peered into lenses, scopes pointed out to a glittering blue Atlantic Ocean, while little birds bobbed up and down on the waves. Every now and then, someone would yell something like “GREATER SCAUP! ANYONE WANT TO SEE THE GREATER SCAUP?” and we’d all rush over to get a share of the view. One couldn’t help but feel excited, too. I loved to watch the birdwatchers, for the same reason that I love watching concerts more than listening to the music on my computer or my iPod. There’s something special about watching a human being doing something he or she loves. When I watch people singing, for example I always feel like they’re higher: like they’ve lifted up into the air, and have taken me with them. Whenever a birdwatcher announced an exciting discovery, it felt like an exciting discovery for all of humanity, as exaggerated as that may sound.
In the afternoon, we parked on a quiet residential street to do some land birding. More specifically, we were looking for a relatively uncommon bird, called the Spotted Towhee. As we climbed out of the car, I noticed a bright red bird sitting on top of a fence, which looked something like this: 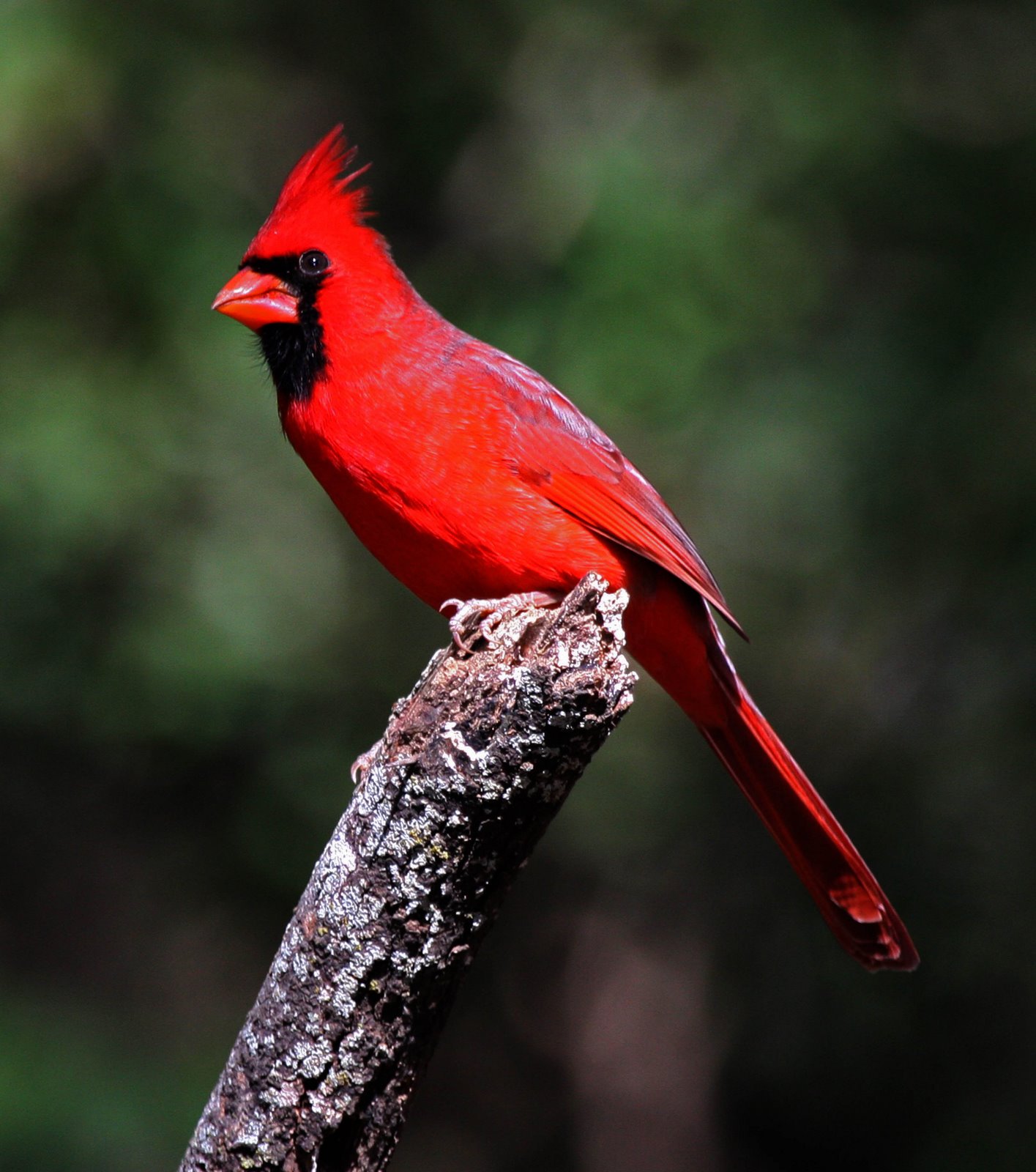 [Image stolen from the Internet]
Me: WOAH! OVER THERE! OH MY GOSH! WHAT THE HECK IS THAT?
The woman next to me looked concerned for my well-being.
Woman: ??
Me: THAT RED BIRD
Woman: Oh! [She looked relieved.] The cardinal?
Me: …yes. The what?
Woman: It’s a cardinal.
She then gave me the same look one would give a four-year-old who has just learned to add, or to read. That “aw, how sweet. a new chapter in your life has begun” look.
Woman: They’re very common.
My mind was blown. How could something that stunning be so common? Answer: birds are stunning. Nature is stunning. Every time I saw a cardinal for the rest of the day, my heart fluttered a bit, and it felt like I was seeing it for the first time.
At the end of the day, we returned to the pier, to the place we had begun. It was my favorite time of day: when the sun is just about to set, and everything has this golden glow, including the ocean and the grass and the trees. We took one last look for birds, and this time, I saw species.
In total, we saw 53 species of birds. Each species had its own special name, and each one looked different. It made me realize that there’s enormous diversity that I’m absolutely blind to: in trees, for example, or plants or cars. I remember how proud I was after taking an Art History class in High School; I could walk around and really see buildings. I could place them in an approximate date range, rationalize why they had been designed that way and who for – appreciate the range of architectural styles around my home and through the ages. Architecture, birds, trees, people: It’s a lovely way to see the world.