I guess for most people, it’s not such a hard question. This place certainly has no shortage of learned-calculus-by-second-grade math majors, kids who’ve competed in national olympiads, freshmen and sophomores already taking grad classes. Friends who spend their leisure time reading biology or neuroscience research. More generally, people who know exactly what they’re doing.

I entered MIT with the vague notion that I would study computer science. Maybe I would even double major, if I was successful enough at the former. I would get a UROP at the Media Lab, help build some software to make people’s lives better, and feel just peachy about my life choices. Several months later, I definitely still want to help people, but I’m not finding it all quite as simple.

I signed up for 6.01 in my first semester and went to a few lectures and labs. I didn’t think the material seemed personally appealing, but I hadn’t heard entirely positive reviews about that class anyway, so I figured I would suck it up and power through for the purpose of a prospective 6-3 diploma. My initial attitude was something like, you got this, Michelle. You were Good at Things in high school, remember? You won stuff? Got straight As? Weren’t intimidated by the apparently superior 6.01 abilities of everyone around you? …Yeah?

After taking what I felt was a lot more time than I should to complete the first Python psets, I sheepishly asked permission from my advisor to drop the class and take 18.02 instead. I started having thoughts to the effect of “everyone else is already so ahead of me, so maybe I should just study something different.” I’ve since been informed that that’s a misguided conclusion to make, and I like to think that I have a much better attitude now. Regardless, I had opened Pandora’s box of indecisive musings… of “wait a second, there are actually so many majors that I could be more suited for and so many I haven’t considered and I could be any of them and oh my god what the everloving egg am I going to study (!!!?!?!?).” After several months of reading/musing on the topic, I’ve gotten a bit closer to an answer, but the same sort of sentiment still stands. 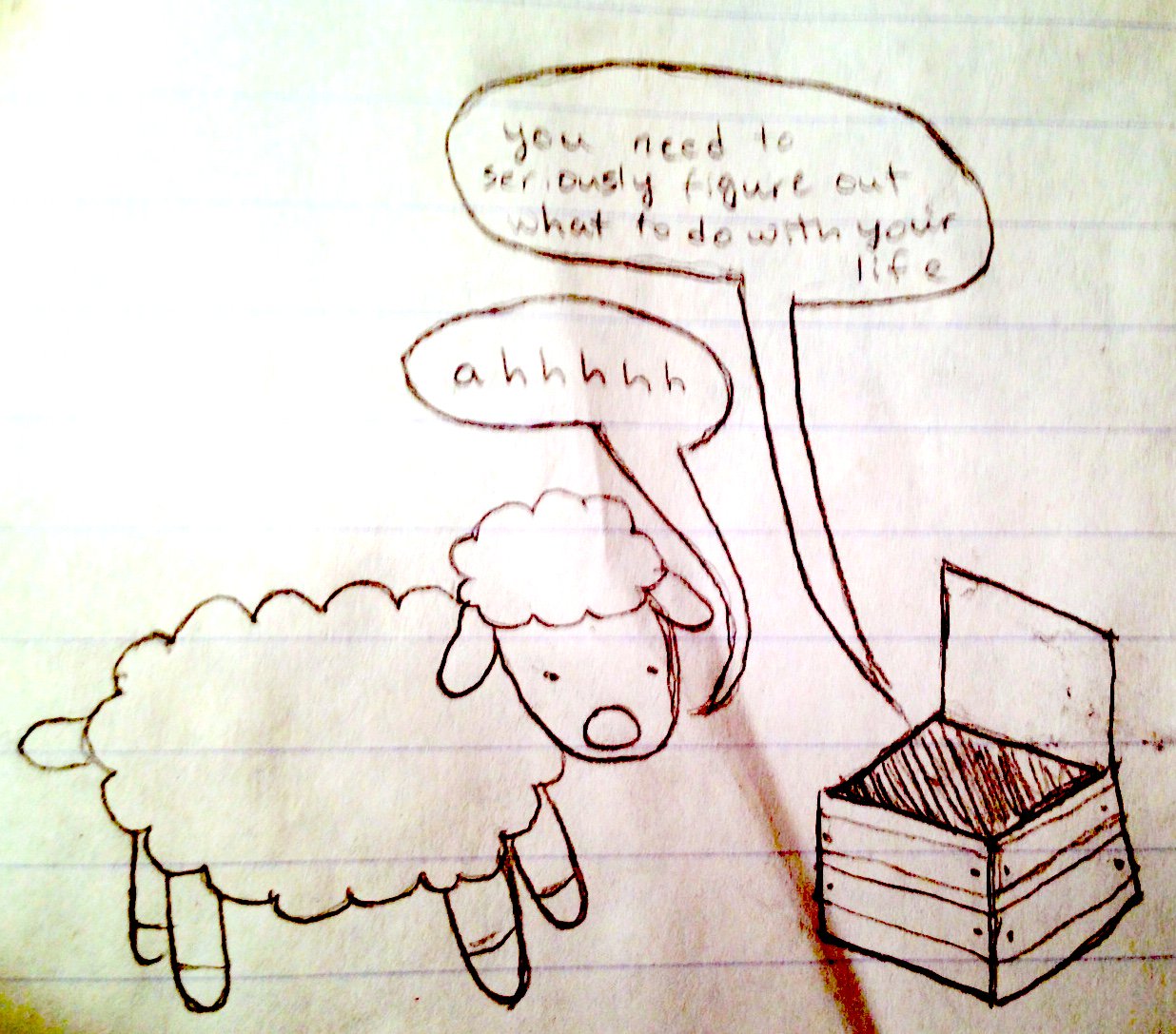 A photo of me from sometime in the Fall.

Ever heard of CourseRoad? It’s this beautiful little web site (actually started by blogger Danny B.D.!) that lets you lay out your class schedule years in advance and feed any obsession you might have with your lack of a decided major. My first courseroad wasn’t very creative: 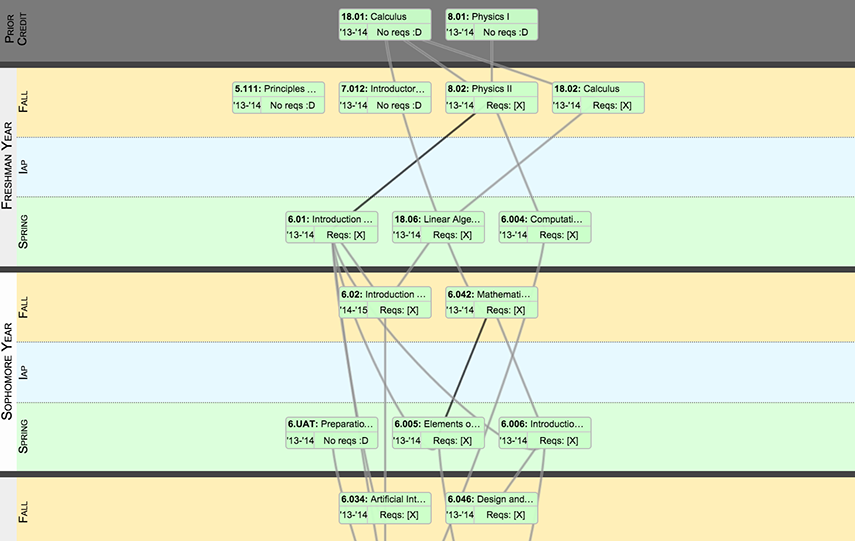 My second was a little bit more so: 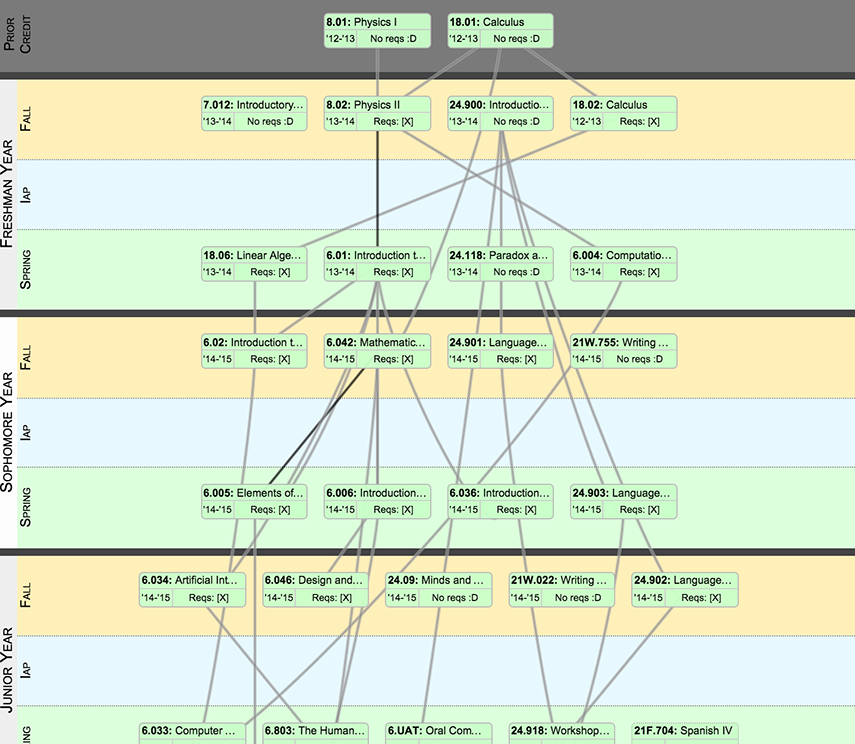 And the 15 or 20 that followed took me all sorts of random places, all of which I seriously considered for at least the time I was making them. It was kind of like I was “trying on” all these different life paths to get a more solid picture of where each of them could take me. A cool artsy Course 4, perhaps? Not really up for all-nighters in studio. Linguistics major? Other research areas excited me more. I had this 21W phase in which I would become an esteemed science journalist and convert disinterested laypeople into STEM enthusiasts, but I figured I write way too slowly and informally to seriously pursue that idea. Chemical Engineering was too rigid and technical, while CMS wasn’t technical enough. At least I’d narrowed it down.

Although I still haven’t reached any kind of conclusion about my major, I think I’ve since developed a better idea of my overarching goals. Like I mentioned, I want to help people, and the gist of what I would optimally do is to convert the privilege of a premiere education into the benefit of those less fortunate. What I mean by this “privilege,” more specifically, is that an MIT education affords me opportunities to affect my surroundings in ways I otherwise would have no power to do. That’s what engineers do, right? They fix perceived problems in the world, and I’ve been granted the authority to say “well, this is a problem that deserves attention” and tap into bountiful resources to find a solution. Then “those less fortunate,” loosely, means anyone whose problems don’t seem to be important enough to others to merit that kind of attention. In a moment of grave seriousness, I’ll say it has everything to do with economic inequalities and social hierarchies. It’s a lot of “make the lives of the wealthy more comfortable, since they have money to give in exchange.” It’s dehumanizing subsets of people to the point where you can’t empathize with the difficulties they face, and I think it’s very not okay.

I’m trying to be open-minded about courses of study that could potentially fall in line with this philosophy. I’m naturally not very interested in making a fortune with startups, but I’m not necessarily looking to work on third-world water purification, either. I initially thought about joining the Media Lab to help people live with Autism Spectrum Disorders – an idea which is still being tossed around. I like stuff involving education for kids, public policy, and using media to effectively propagate ideas. But I’m also more recently considering options to look at these kinds of problems on a larger, more grandiose scale that could lead to grad school and research. Hence 18/18C, 17, 14, and possibly even 8 (Math, Political Science, Economics, and Physics for you guys not hip with the language).

I’m getting interested in studying how social organizations and hierarchies arise in the first place, in potentially a technical way. The common existence of hierarchies across every world society suggests that there are principles to govern their propagation, but the fact that some societies have become more “progressive” than others suggests that there are principles to facilitate their dissolution. At the same time, I’ve been trying to acquaint myself with techniques that computer scientists use to model interconnected systems, specifically in computational social or political science. And the personal appeal of mathematics – well, I’m not about to lock myself in a hut in the woods and derive theorems for the beauty of it, but I recognize math as a tool to be used in describing quite literally everything, depending on your personal philosophy about the nature of the universe and all that.

I’m considering Econ because of the specific flavor of problems that arise from free-enough markets, and for the prospect of figuring out how to solve these without causing even more problems than before. Physics (unfocused option) because – although a bit tangential – I feel like it’s the most core perspective on how systems can behave under sets of natural laws, and could give valuable insights on how to go forth and study a range of different subjects. Plus, you know, I really like what I know of physics. I’d want to know more, if I can handle it.

Then there are the random engineering disciplines for which it’s pretty obvious why they can benefit the world (of which Materials Science is the one I’ve most heavily considered). A lot of these engineers are saving lives on the daily or are otherwise doing amazing things. While I tend to doubt that the process of designing and building is what I’m good at, I would be a very happy person if I were able to make that kind of positive difference.

So what am I going to end up actually declaring? The answer is that I currently have no idea, and that you should ask me that again in a few weeks when I have to declare, and then again in a year, because the two answers might well be different. The thing I find most comforting through all of this is that in talking to a range of people, almost everyone seems to have something generally positive to say about their major. Faces light up when you ask about UROPs, and if you’re lucky, you might get the passionate ramblings that end with “sorry, I’m rambling, I’m just really excited about so-and-so.” Don’t be sorry! It’s adorable. And your enthusiasm is great. 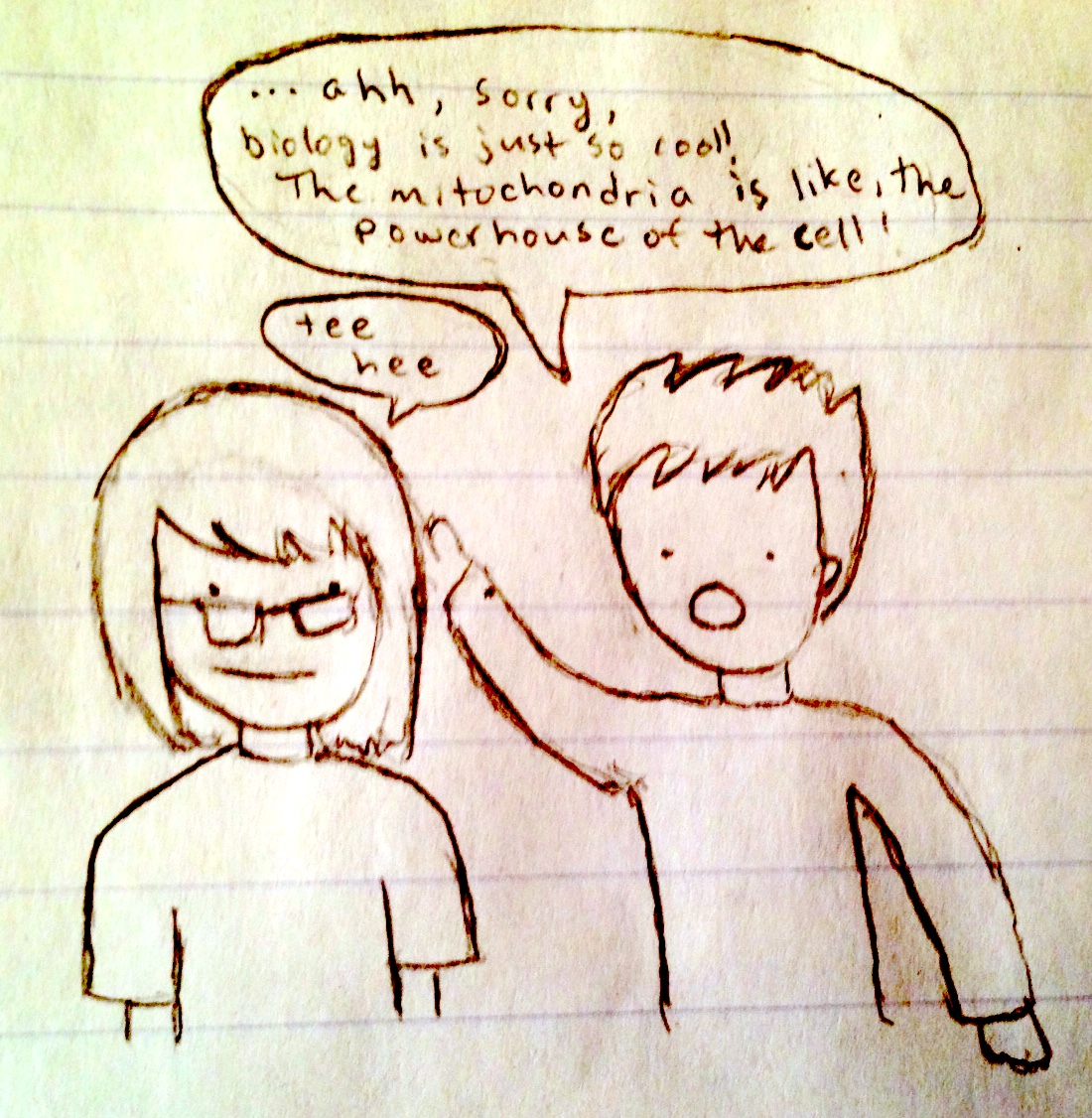 P.S. – I wanted to clarify that I don’t mean to say it’s an objectively superior ideal to study something that overtly benefits others. Why? Because “altruism” is, in my opinion, just the result of people doing things that make themselves feel better, and therefore would logically be no more “noble” than a person studying something that makes them equally satisfied. Fulfilling my goals would make me nothing more than personally happy – just why anyone does anything, right? The point of all of this. Hopefully, I might learn a thing or two in the process.