What is an Incomplete Grade? by Anastassia B. '16

ABCDF....I? How to use MIT's grading system in dire situations

ABCDF….I? How to use MIT’s grading system in dire situations

You may be wondering how, with all students being varying shades of brilliant, MIT handles grades.

Never fear! It’s similar to what a lot of us used in high school, namely, the ABCDF system, except with a few additions. Below is a screenshot of how your MIT grade report looks like online.

Note: Your grade report is slightly different from your transcript. The grade report is for internal advising use only, and may have +/- modifiers, dropped/listener subjects, academic warnings that do not show up in the transcript you send externally. 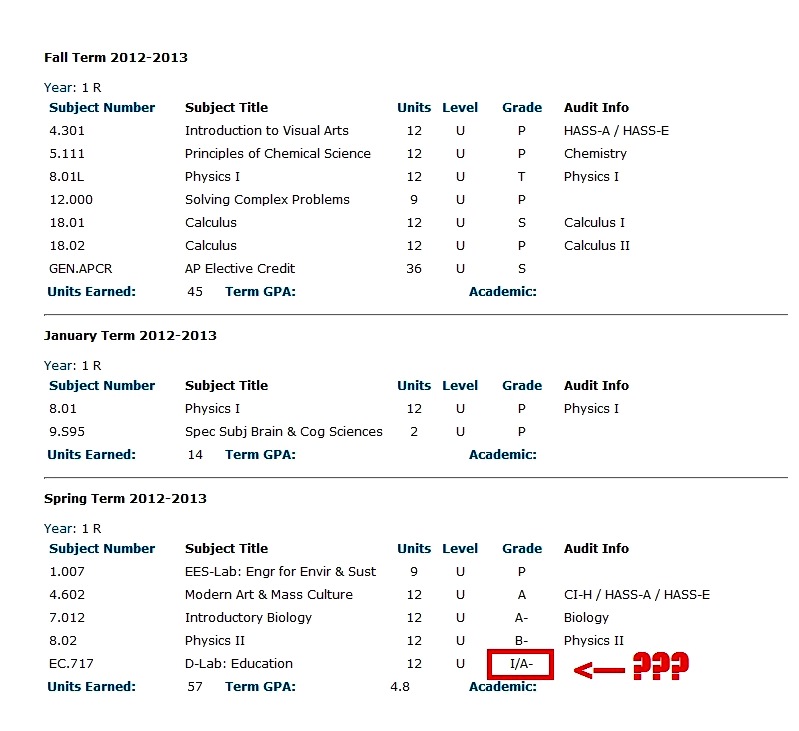 (Here is a list of all the letters/symbols that may appear on an internal grade report.)

You’ll notice the usage of STP freshman fall. Rather than standing for Standard Temperature and Pressure, S refers to transfer credits, T is a temporary placeholder for a class still in transit, and P means pass. These do not weigh into your GPA.

Spring semester was a little bit different. Unless you gain ‘sophomore standing’, there is a credit limit of 57 units. I used that opportunity to explore Course 1 in a Pass/Fail 9-unit Civil and Environmental Engineering Lab. 9 units is an overestimate of the time commitment of this class, which had a weekly 1 hour lecture and a 2 hour lab, basic readings and homework, and really awesome field trips to places like a wind turbine blade testing facility, Cape Cod, and even the ever-exotic Charles River. Although interesting, this class helped me realize that Course 1 wasn’t my destiny.

An Incomplete grade is an option in certain situations where a student was unable to complete a course by the end of the semester. An I is stamped onto the report, and the student is given the opportunity to turn in late work by an assigned date. Upon completion of the course, the grade changes to I/X, where X is the official grade which weighs into your GPA.

D-Lab is one of MIT’s most amazing ways to get involved with international development.

Last semester was the first time that D-Lab: Education was being offered, and I signed up right away, having been interested in educational reform since high school. It was my first project-oriented class, and I was really excited. Little did I know the depth I was getting into.

Me and my teammate, Beibei (Wellesely ’16), were introduced to our partners:

The more we learned about each partner, the closer and more understanding our project became. We started the design process with introductions, a lot of questioning, and very thorough needs finding for the Avani school. Meanwhile, we were learning from and teaching lessons to our local classroom. 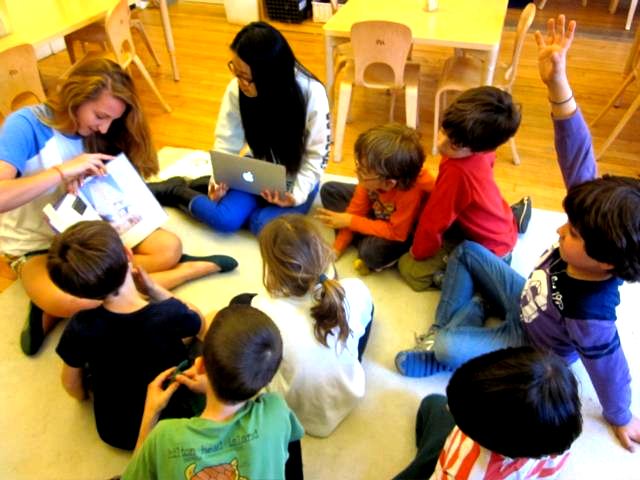 I was visiting the Advent classroom every Tuesday and becoming really close to the students, whether I was teaching about global geology through soil painting, or letting them design and build foreign architectures from recycled materials. Simultaneously, through many emails and Skype sessions, I was starting to understand the Avani community and its needs. We began the prototyping process for our project. 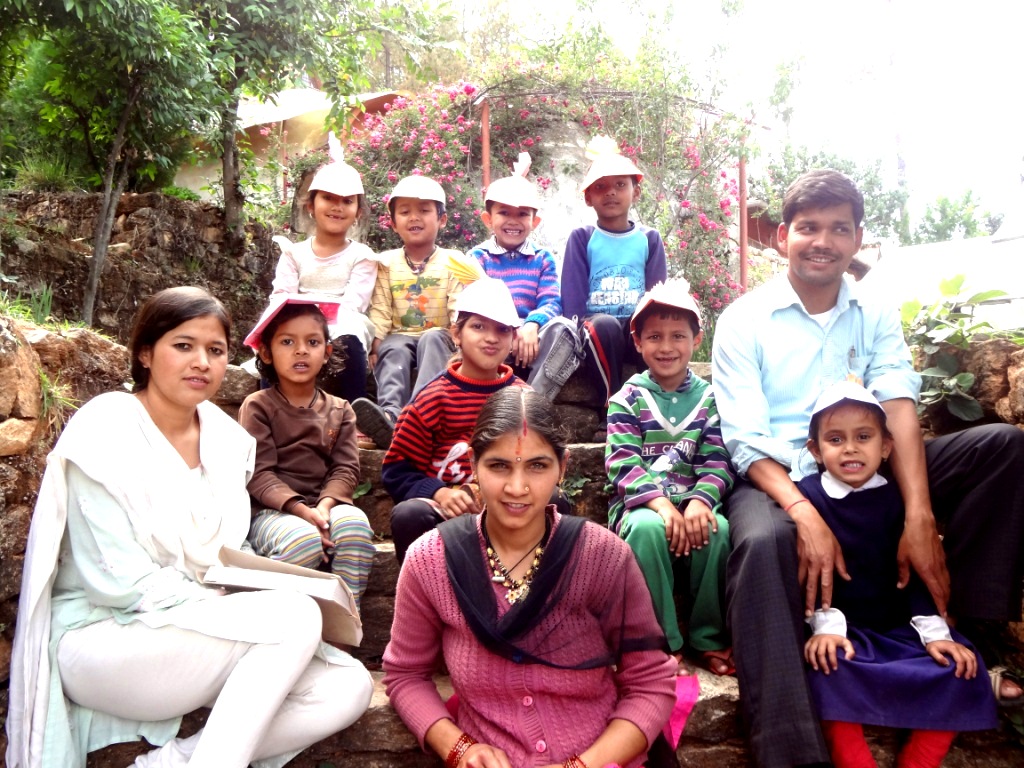 Everything was going really well… except for time.

Since this was the first time this course was taught, the instructors were open to its direction and very facilitative with deadlines and expectations. Although our project was complete and we had presented it at the MIT Museum along with all other D-Lab classes, there was a deadline for the Final Project Report and separate Final Reflection which was already pushed for us to be right before finals. You can imagine that this can be a stressful time. My partner had started to help with the report, but the Wellesley term finished and she had to fly to China. When I realized the high quality (polished.pdf) and length (30 pages?!) of the other reports turned in, it was much more than I could produce, alone, in the hours I had. I discussed the situation with my instructors and was faced with the choice of either trying to do it all (these two reports alone were about 25% of my entire grade) and get a final grade based on that, or choose to get an Incomplete and submit everything within two weeks (but after finals).

I had put a lot of time and effort into D-Lab throughout the semester and wanted to put my all into the remaining portion. I chose the latter option. Had I not, I would have been disappointed in the final outcome of something that had grown quite important to me.

And so my summer break began with nonstop-motivated-work. After a few days I had written the most outstanding* papers I’d ever accomplished.

*in both senses: very great and very late