The thing that happened, why the thing is upsetting, and what can hopefully be done

The thing that happened

My phone was buzzing all day Friday with emails regarding the same Thing, the same event, the same new information. As Sabrina described vividly, even the initial subject line seemed ominous – “Important news for the Senior House community” – which then was followed with immediate mention of “troubling data” and “important decisions we have made.” Emphasis mine, because “we” was in no part the “Senior House community,” and I felt that discrepancy did well to set the tone for the body of the announcement.

Here’s a screencap of the message: 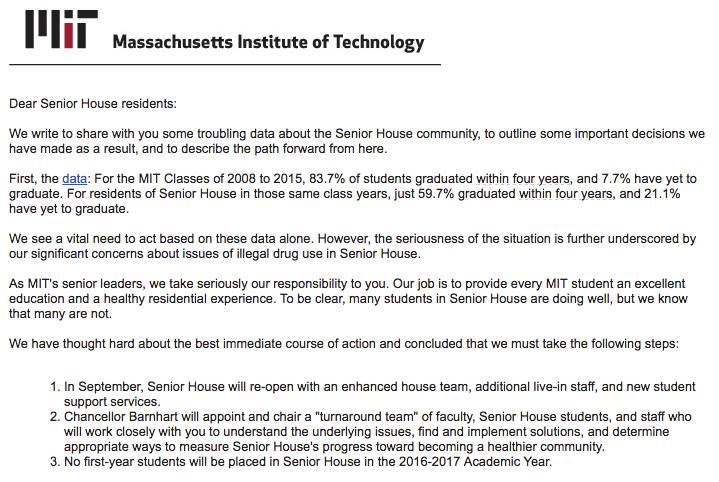 There is a good chance you’ve heard about this already, since a lot of people are talking about it. There is an article in The Tech regarding its announcement in general, and then another in which Dr. Cynthia Barnhart discusses the plan more depth. As I mentioned, there is an enormous amount of talk about this in public channels by residents, alumni, friends of the Haus, and others who are concerned. Even my mom texted me about it saying they e-mailed her too, as they did to every parent of a Senior House resident. I have definitely read more open-letters-per-time-unit since the release of this announcement than in any other equivalent length of time in life on this earth, which I think serves to illustrate that this has provoked some sort of controversy.

“Whether your hair is mousy brown or electric blue, whether you listen to classical concertos or cutting edge undiscovered bands, whether you like sushi or greasy diner food, trashy novels or great lit in dead languages, you’ll find those who share your tastes at Senior House. And if you can’t peg yourself on this either/or list, we’ll love you all the more. Senior House residents are happy to sometimes march off the beat of any drummer. And long after you’ve left MIT, you’ll always want to come home again.”

The number cited in the e-mail looks drastic. Sixty percent 4-year graduation? This is pretty low, and it suggests there has to be something that is different about Senior House to explain this alarming statistic.

If our aim is really to use proper statistical methods to diagnose a problem, we will first want to control for things not held equal. We might first look at demographic factors, as it is well-documented that students of certain demographic backgrounds are significantly more likely to take longer than four years to graduate. For instance, Senior House is one of the most inexpensive dorms to live in and has a disproportionately high share of low-income students, and in fact, the most expensive dorms – McCormick, Maseeh, and Baker – have the three highest graduation rates, whereas the cheapest dorms (East Campus, Random Hall, Senior House) have the lowest. On top of this, the House houses a disproportionately high share of underrepresented minority students, and according to the Chancellor’s office, 40% of its residents are LGBT. To the extent that the difficulties associated with these factors can explain the graduation rates, action targeted at the dorm itself is worthless, especially the problems faced by poor and minority students could be addressed directly with respect to their experiences. In addition to this, a number of people have pointed out that the openness of Senior House culture is likely to select for those who suffer from mental health difficulties, yet were it not for the tight-knit community they had had here, it would have been much worse for them. To ban freshmen is here not only bad science, but a disservice.

Points like these are not my own, and they are just a fraction of those being voiced in response to this decision. Holly ’18 eloquently summarizes these and a number of other objections that the community has expressed in an open letter to the Chancellor, which I suggest you read for a more comprehensive account of why people are generally upset. We are alarmed at the complete lack of collaboration with residents in the process of this decision. We are disturbed that a predictably controversial decision was announced after most students had left campus for the summer, which comes across as a strategic effort to minimize protest. In general, it should be expected that policy very drastically affecting the situation of a large number of people should be drafted with their input, or at the very least with their knowledge. I’ve never much liked surprises.

And then, it was also a surprise that they survey data apparently being used to corroborate the “drug use” allegation was not as anonymous as it purported to be. (Still, the aggregate data has not been publicly released, so it is impossible for us to know what it actually says.) Others worry that this measure constitutes an existential threat to the community as we know it, with ominous references to Bexley, a dorm culturally similar to Senior House which was recently closed and torn down.

I will also point out the fact that the cultures of dorms are built from different people with different values, which should easily affect graduation rates. The atmosphere at Senior House is anything but conventional, and many stray off the four-year path as a result of their personal uniqueness. I can name a number of fellow students who have taken time for startups, students who take semesters off to travel around the world, and students who punt the Protestant ethic and instead enjoy their lives here, at the cost of taking more time. The most creative people I know have felt trapped by the rinsing and repeating of the deadlines and the grind because their minds are somewhere else besides the five point oh and the six figures and the severe importance of demonstrating their worth to the rest of the world quantitatively. And personally, I love being at MIT! but I’m not about to drink Kool-aid from the firehose that tells me a failure to follow a cookie-cutter ideal is indicative of a personal shortcoming. I think this aspect of the culture was what drew me in, though it’s possible my time here has further “corrupted” me with a more confident sense of irreverence. The administration aims to protect the freshmen from this corruption; I don’t think that this is right.

But you know, we could instead ignore all of this and come to the conclusion that those 20% of Senior House residents are junkies who drop out of school cause of Drugs (I hope I phrased this in a way that is obviously sarcastic, since I feel like this not far from what they actually would have you think). In seriousness, I don’t think that there’s anything wrong with making sure students are healthy, and looking to design policies to help them. We welcome the mental health trained faculty, and are passing around ideas and initiating dialogue about things we think we could improve upon as a community both socially and academically. But I do think that this interpretation of data on graduation to justify depriving freshmen of Senior House (and depriving Senior House of freshmen) is absolutely not acceptable, and I think this is the general consensus.

People now are looking to negotiate. They’re trying to bring back the freshmen, and to modify the remainder of the plan in a way that is tailored to what students feel will best help them succeed, academically and/or personally. A group of residents already met with and spoke to Chancellor Barnhart on Friday.

Robby ’18 was one of these people. What he said to me, after meeting with her in person, was something like: “I honestly think she wants to do good.” The immediate dilemma I then found myself in was whether to dismiss him in cynicism or in sarcasm; but see, Robby has an intuition that I really really trust, and he’s up in the front line in Cambridge, and I’m not. A lot of people are very upset and passionate and distrustful of the administration – as was my own instinct – but in the back of my mind I do keep considering the possibility that this solution will be successfully re-negotiated, because someone who genuinely wants to do good should listen to a resounding chorus saying “the ban on freshmen will actually do much more harm than good” and then accept an invitation that goes “let’s work together to figure out what will help.” It’s a belief in the mutual exclusivity of a genuine desire to craft policies that end up for the best, and the implementation of the policy as it currently stands. I suspect only one of these can end up being true, and if Robby is right, then I have hope.

The Chancellor also admitted that not working with students and staff from Senior House to develop this plan was, in her words, a “mistake.” This recognition on her part is also very significant. Any rational person will agree that an enormous and fateful decision should not be implemented if the decision was made in a way that they believe was flawed. It’s like, imagine you declare the next president of a nation and the people collectively say, “what the hell?” Because apparently you had intended to run an election, but forgot, and you say, “whoops, that was totally a mistake.”

…“But it seems like the winner was already announced on TV, so it’s too late to run the election now, yeah, sorry” ?
or would it be,
…“So let’s take a step back and fix this.”

Like I said, my current hopes about the future of these negotiations involve a healthy dose of faith in the parties involved, and an underlying sense of amazement at the dedication of the community through all of it so far. There is something profound in the fact that people care so much, that they’re taking time out of their busy schedules to devote their attention to preserving something they value and ensuring that future generations can come to share in it too. It says there’s something worth keeping alive here. And it says there’s a lot at stake.

In the mean time, here’s a nice petition, and an email address for Dr. Barnhart. I will try to keep you updated.