and arousing the suspicions of a snarky Nobel laureate

A niche on the third floor of MIT’s Building 8 leads to two glass doors. MIT CENTER FOR THEORETICAL PHYSICS is printed on each in small, neutral red letters.

Immediately inside, the left-hand wall displays a grid of portraits of the 67 individual resident physicists. Each poses in front of a chalkboard, with a drawing of his or her choice. A spectacled Dirac Medallist smiles awkwardly in front of an innocuous upside-down triangle. Alan Guth, father of a theory describing the early universe and my advisor, stands in front of a blank board; he is grinning, hunched over, and brandishes of papers with his right hand. A string theorist named Allan Adams poses with his chalk drawing of a cup of coffee; he “holds” the imaginary cup and peers contemplatively off to his left. John Negele, who studies the structure of elementary particles like protons and electrons, is holding a real cup of coffee. Sho Yaida is beaming as he holds a crying baby girl at arm’s length, so that the symbol he drew on the board sits between their heads: a ~ sign, which means “is approximately equal to.”

The first office beyond the grid of portraits belongs to Frank Wilczek, who won the Nobel Prize for Physics in 2004. Outside his door hangs a red sign with black letters: ‘Having Abandoned My Search For Truth…I Am Now Looking For A Good Fantasy.”

I stood in that entrance hall for a solid twenty minutes, taking notes on all the portraits and the carpet and the ambiance and the kinds of people I saw wandering around (you can recognize the theoretical physicists by the chalk handprints on their slacks.) At some point, I felt a presence, and looked up to find Frank Wilczek standing a foot away, grinning at me.

Frank Wilczek was grinning at me. I glanced at his hands and wondered if Nobel Prize medals leave residue.

“You casing the joint?” he asked, grinning even wider.

1) I don’t know what casing the joint means
2) FRANK WILCZEK IS TALKING TO ME
3) AHHHHHHH IT’S FRANK WILCZEK!!!

I freaked, babbled about science and journalism and assignments (I think hope) for about 20 seconds, before he laughed and said “ahh, I see” as though he didn’t believe me. Recovering my composure, I pointed to the “Faculty Interests” bulletin, and said “I like your description of your interests.”

Wilczek’s reads: “theoretical physics.” Most of the others have paragraphs, or at least a few sentences. I got a little bolder. “Your interests are very broad.”

He laughed. “It’s accurate, maybe not broad.” And with that, he disappeared (I actually have no memory of him walking away; one second he was there, the next he wasn’t. This guy has serious magical powers. I’m not kidding.)

So, I got my dose of strange-encounter-with-a-Nobel-Prize-winner. I texted a friend, who explained the “casing the joint” means “looking around for things to steal.”

Anyway, I spent about an hour more taking notes in the rest of the center, before heading home to type it all up. Another fun fact about the CTP (Center for Theoretical Physics), in case you’re curious: there are 24 large photographs of caterpillars lining the walls in the main hallway. They have titles like “Wild Lettuce” and “Grapevine Calligraphy”. It’s an exhibit of New England insects called “The Art of Survival” by “artist-naturalist” Samuel Jaffe.

Interesting. ANYWAY, I got home, typed it all up, and submitted a rough 500 words to my professor. The final paper (due Thursday) is meant to be 2000 words; the idea was to make sure we were on track.

In class, my professor read every submission out loud, and made corrections live, with the rest of the class watching. It was…a little intimidating. I had the joy of hearing mine read first*, and made the disclaimer that my 500 words were sort of all over the place.

*The life of having a name that begins with A…

I had a nice passage about one topic, another nice passage about another topic, and was struggling to string it all together to make one coherent narrative. That said, I guess the writing itself was fine, because after reading it out loud my professor said that it reminded him of John McPhee’s. When the class responded with a blank stare, he groaned and slapped his face on the table in despair.

“DON’T tell me,” said, slightly muffled by the whole table-in-his-face thing, “that you haven’t heard of John McPhee.”

I obliged by saying nothing at all, unzipping my pencilcase, and writing “READ JOHN MCPHEE” in red pen on the back of my notebook.

Apparently John McPhee has won a bunch of Pulitzer prizes, so that was encouraging – although it didn’t solve my incoherent-narrative problem. I had a few dozen different segments of an essay that I needed to stitch together. I described the problem, and my professor looked interested.

“You know,” he continued, “when McPhee had to write essays, he would string clothes line all over his office…” Apparently, the writer would write out chunks of the essay, pin them to the clothes line, and construct his essay by physically lining them up.  “Of course, you won’t be able to do that, because it would take too much time…but something to consider.”

I considered it for about five seconds, reasoned that I didn’t have

a) clothes line
b) clothespins, or
c) time,

and decided against trying that method out, although it was intriguing.

That said, I also didn’t have an essay, and the whole “no time” thing was increasingly stressful.

Very quickly, it was Tuesday night, I had well over 2000 words written, and still no coherent essay. It was incredibly frustrating – organization in essays usually happens organically for me, and I couldn’t figure out why I was struggling.

At around midnight, I snapped, walked downstairs, printed out what I had so far, and subjected it to a pair of scissors. I took all the notes and rubber bands and pictures off my corkboards, and stuffed my pockets with thumb tacks. I borrowed another box of thumb tacks from a neighbor…

…and turned the wall outside my door into an essay. 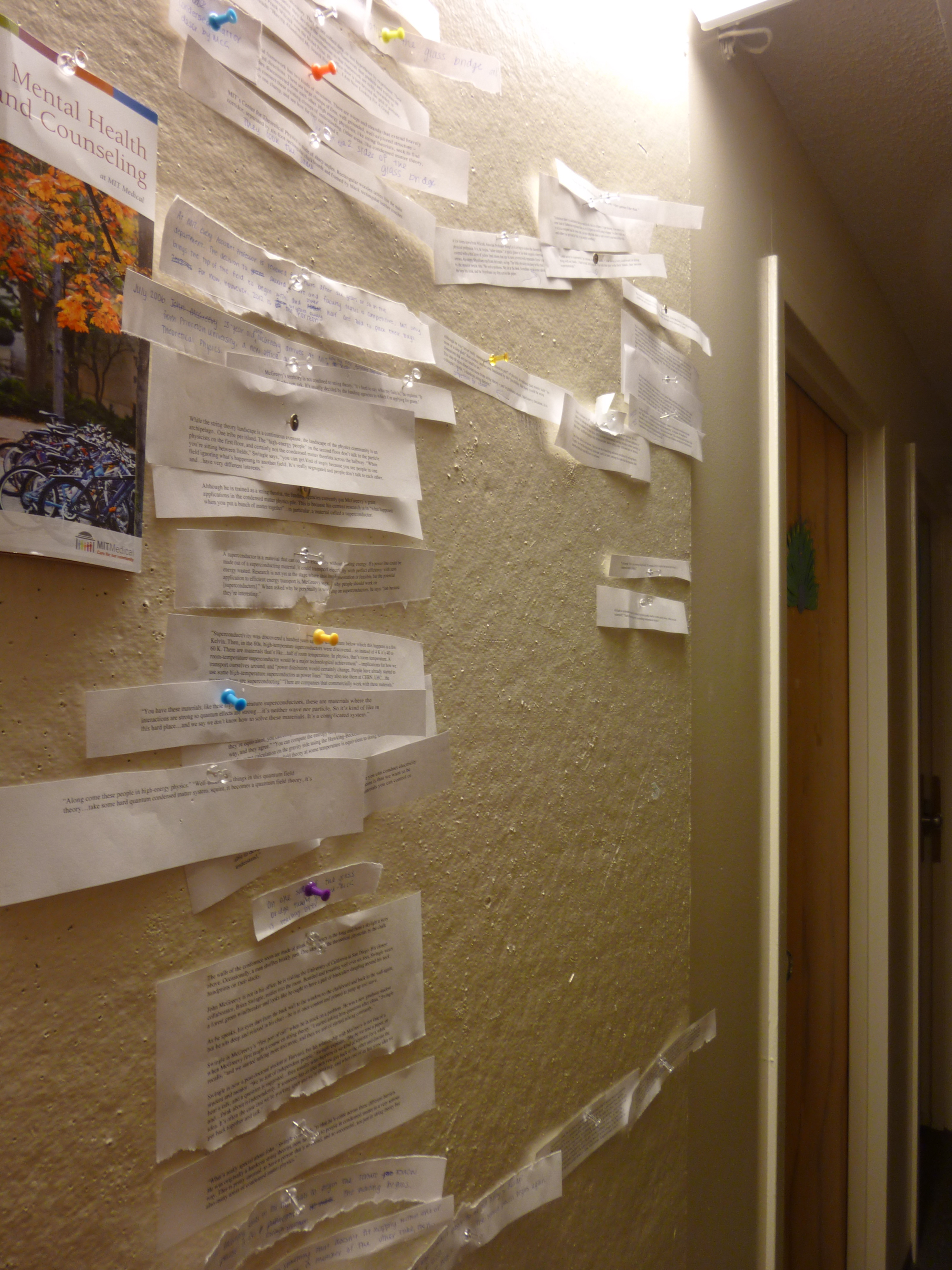 It was INCREDIBLE how quickly my essay came together after I put all the chunks up there like that. I would look at a sentence, search for one that seemed to match, tack them together…glance around for another one, or shift one down to the bottom because I realized it wasn’t quite related. Occasionally, I noticed a gap in material, so had a pen and spare paper handy. I drew some arrows. Some chunks never made it on there – this method made it obvious what did or did not contribute to the overall flow.

Another variation on this method is to write all the chunks on notecards, shuffle them up, put them in the order that makes the most sense to read, and literally transcribe them onto your computer. I preferred the thumb tacks, because I like visual flowcharts, but whatever floats your boat.

But seriously. I was stunned at how well this worked. So, if you ever find yourself stuck on, say, a college essay – maybe it’s time to invest in some thumb tacks and a cork board.