time is an illusion that helps things make sense

I recently finished watching Adventure Time, a fantasy cartoon written by Pendleton Ward that follows Finn the Human and Jake the Dog and their adventures through Ooo, a fictional land with crazy creatures and monsters.

I don’t really have the words to describe what this show means to me. I started watching it with my high school boyfriend in junior year, where he swore it was one of his favorite shows ever and insisted I watch it.

I didn’t watch Adventure Time growing up because I thought it out to be too childish for my tastes, as the show is riddled with moments of immaturity like farting and pooping jokes. But as I watched, I saw a deeper story unravel before me, where there was so much more than silly bits and gags. (Not that these weren’t enjoyable, I think the immaturity is necessary to understand the show fully.)

I took a long break from watching the show after breaking up with my boyfriend, with the show reminding me a bit too much of our relationship. I only then started to pick up the show again after falling into a deep depression during the beginnings of the pandemic. My current boyfriend watched episodes with me, both of us never having seen the show before. It brought me a lot of comfort.

I loved how colorful it was. I loved how it seemed to subvert expectations, where characters would show up that I would think to be evil or troublemakers or some problem-causers ended up being pivotal to the show and some of the most lovable characters. I realized how hastily I would make judgments, and how the show seemed to tut at me for it, showing me that perhaps every character, big and small, strange and weird, has some good in them.

I took another break from the show, stopping around the middle of season 6, due to just life happening. School was starting up back in person again and so I didn’t continue watching it again until, well, three days ago.

I sat in bed and bingewatched seasons 6 through 10, leading us to here. To now!

In those ten seasons, the show matures, where you can see the direct growth of all of its characters. Finn, evolving from a flighty, crush-having, immature 12 year old boy, to in the final season a 17 year old “man” (as he deems himself in the episode).

As the show came to an end and my screen dimmed, I couldn’t help but think of the evolutions I have made throughout the 4 years I’ve been watching the show, how I, too, changed and grew alongside these characters. Where I went from thinking that the show was childish and simple to understanding the complexities and meaningfulness of it. To opening my heart just a teenie bit more to appreciate the childlike wonder that is Adventure Time.

One of the things that resonated most with me was how the show handled relationships. In the show, Finn holds a complicated relationship with his father. His father, being an ex-con-man, has difficulty wringing himself free from his conniving ways. Finn is a hero that embodies goodness and honesty, a seemingly direct opposite to his dad. Time and time again, Finn encounters his father on his journeys, only to be let down by his father’s self-preserving nature. We watch Finn deal with complicated feelings, trying to navigate the disappointment and anger he feels regarding his father.

Finally, in “On the Lam”, Finn realizes that no matter how much he confronts his dad about changing, about giving him answers, about feeling any sort of closure to the situation, he will never get that. His father summarizes it best as he tells Finn, “No answer I give you will be satisfying” before disappearing by the whim of a magical cataclysmic comet.

As someone who constantly chases closure, constantly pursues finding answers and meaning, this episode hit hard, as Finn sits back and understands that sometimes people cannot change into what we need them to be. Sometimes people are just, as Finn puts it, “crummy dudes.” 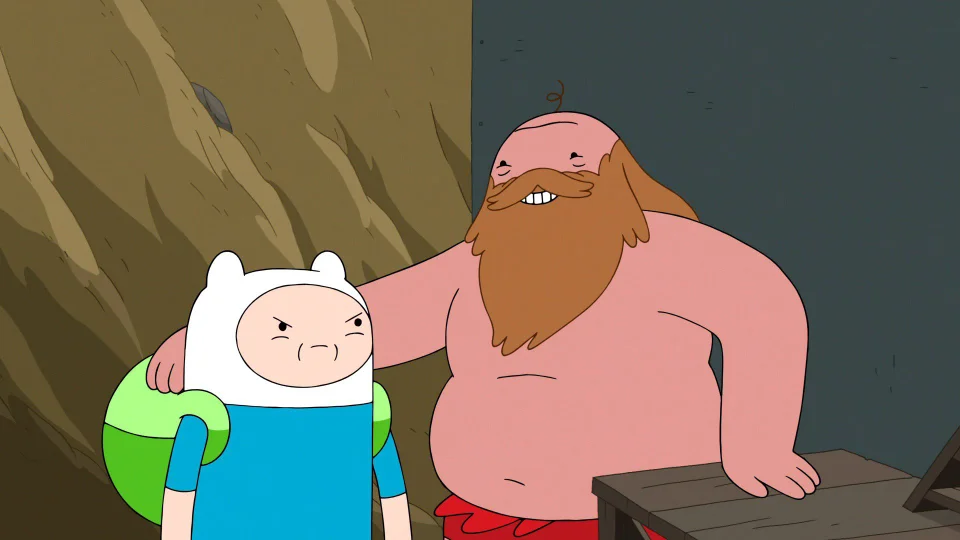 finn and his dad

What I appreciate in this falling out is that the show never forces Finn and Flame Princess to get back together again. Instead, Flame Princess says that she’s open to Finn and her being friends in the future again, once they both grow. Eventually, Finn apologizes to her and realizes how awful his actions were.

But more than this, I appreciate how the show demonstrates Finn’s humanity, that someone we laud in the show to be the embodiment of goodness and honesty and heroism, is someone who is flawed and can partake in toxic activities. That no one is free from fault. But Finn’s goodness allows him to grow from the mistakes of the past. 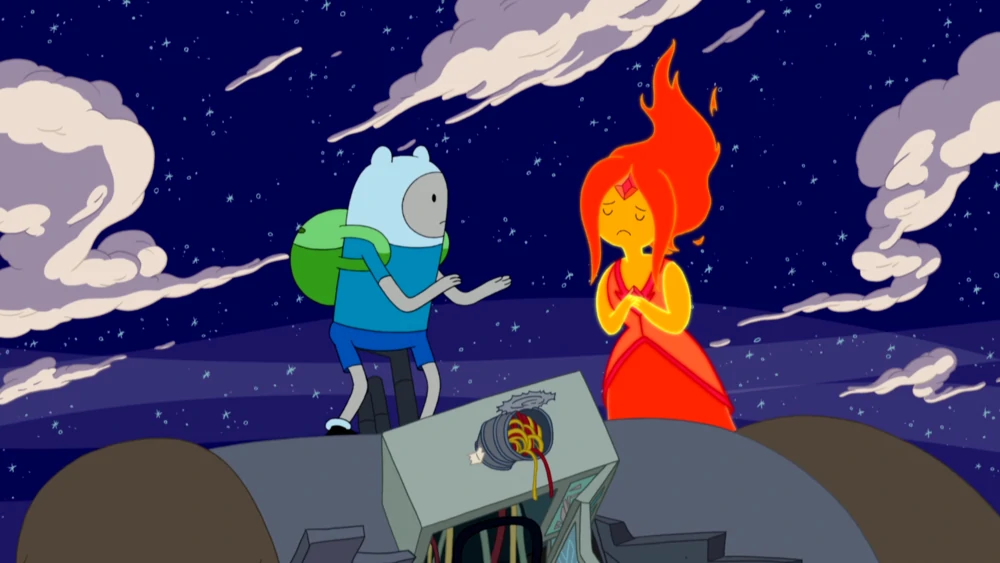 This show is all about growth, about aging and learning and letting go of the past and moving forward.

Being back home, I’ve watched as my room has shed parts of itself to age and mature alongside me. As stuffed animals get packed away and guitar cases open and shut, my home has changed just as I have. My parents have changed. My grandparents, too. Everything around me has been trekking in a path and it’s scary. Change is scary. I watch as my grandparents slowly forget more and more by the day, or as my mother grows more and more tired, as my family members become less and less of my idols and more human in my eyes. That they are good people with faults, faults that are growing clearer to me by the day.

It terrifies me, watching people age and watching my perceptions of these people change as time continues onward. And while I wish I could do something to stop it, to pause myself in the good times, I cannot.

And there we are again and again

‘Cause you and I will always be back then

You and I will always be back then

“If I change, will they still love me? Will I still love them? Does growing up just change your body, or also your soul? Maybe I could just stay the same forever.”

It’s been hard, very hard, being back home. But through shows like Adventure Time, I’m learning how to deal with change in healthy ways: writing, singing songs, talking it out, and rolling with the flow of things.

Nothing lasts forever, and nothing stays the same. It’s one of the scariest truths of this world. But what we can do is appreciate the past, the “back then” and the “happened”, and grow to create the best “will happen” in the “happening.”