Yes, those are actual lyrics from the musical I was just in

I thought I would be okay a whole three weeks out, but even during FINALS the symptoms are presenting themselves clearly:

The diagnosis is clear: I have a solid case of post-show depression :(

If you’ve poured your life into some sort of seasonal activity, you know the feeling. About a month ago, MIT’s Musical Theater Guild (MTG) put on its last performance of “A Chorus Line”. I was exhausted at the end of it. I’d spent the last two weeks either rehearsing for six hours a day, performing, working on the set, or being extremely ill. TBH, I was relieved that the show was finally over. I could have my life back! I could heal, start some personal projects, catch up on my (late) homework. You know, being a real person and that sort of thing. But as the weeks have passed and I’ve gotten over the stomach flu, I’ve realized something.

I have NO clue what to do with all of this time. I lack purpose. I lack motivation. I lack a creative outlet. Even though it’s left me sick and over-tired and behind academically, I miss the show.

When I got admitted to MIT, my number one concern was not having a space to pursue my love for the arts. I NEVER thought I would go to a STEM-heavy school because I loved to paint, to write, to perform; I’ve always prided myself on my dual identities as both a critical thinker and a creative-type. On the surface, a place like MIT didn’t seem compatible with my passions, which scared the hell out of me when I didn’t get admitted to other schools that advertised more well-rounded curriculums.

But I was wrong! When I came for CPW, I quickly realized that MIT is really different than what most people make it out to be. Almost everyone here has an interest that isn’t STEM. People love the humanities, the arts, business, athletics, and just about anything you can think of; when those passions mesh with MIT’s hands-on, let’s-get-shit-done attitude, you get all kinds of wonderfully vibrant communities. MIT students are so much more multi-dimensional than most media gives us credit for. It makes me sad to think how many high schoolers don’t consider MIT because of that.

I knew I would audition for some kind of show the second I got onto campus, and I eventually chose to hang my hat on MTG. Was it scary to audition as a freshman? Of course. I was so terrified that I almost didn’t show up. My voice was completely shot (thanks freshman plague), but the production staff was still incredibly kind to me. I sang my audition song, did a range test, danced, and did a few cold readings. Callbacks were a grueling six hours long, but it was all worth when I was offered the role of Bobby! I was so hyped that I would play one of THE characters in THE chorus line. It was a bonus that the part was male because I low-key love playing roles with different genders.

Rehearsals were 7:00 PM to 10:00 PM Sunday through Thursday nights. For the first month I was usually called only once or twice a week, but the schedule ramped up as time went on. I won’t lie, I wasn’t always super thrilled about the rigor. There were times when we’d been in Ten Chimneys for two and a half hours, I had a pset due the next day, I couldn’t get a section of the tap dance for THE LIFE OF ME, and I wanted to just walk out. When you’re stressed and busy it can be hard to remember why you love something. But the days when we would nail our harmonies, or I saw myself smiling in the mirror during the jazz combo, or I would share a good laugh with my cast members: those moments made my heart do a little leap.

The week leading up to opening night was brutal. We ran the show every single day, squeezing out a slightly smoother production each time. I would get back to the dorm at midnight and collapse on someone’s bed (not my own often enough. I need to be better about going to bed on time), often rambling about how exhausted/stressed I was. My caffeine intake was definitely approaching excessive. My sleep deprivation was at critical levels.

But then opening night arrived. The rush of performing is like nothing else I’ve experienced. Every laugh, every applause, and every reaction brought my character to life, even when I was ridiculously sick. The feeling of entertaining an audience made all of the hard work worth it. It always does. And as I packed on the stage makeup before each show, I realized how comfortable and happy I felt with the people around me. We’d been brought together by a hatred for tap dancing, by setting up a hundred chair at 12:30 AM after a full dress rehearsal, and by a shared passion for the stage. I was in bad shape, but I wouldn’t want to be in bad shape with any other group of people or doing anything else.

We stayed up until about 4 AM the Sunday morning after the last show to strike the set. Not going to lie, it was sad to see it all go down. At the very end we all gathered in Talbot lounge at East Campus for strike party, an MTG tradition. We ate chicken nuggets, told classic MTG stories, and signed each other’s posters. And just like that, it was over.

I don’t know if I’ll have the time to do another show until the summer, but I’m going to try to stay involved in other ways. If I’m still lost in post-show depression now, I can’t imagine going without the theater for much longer. We’ll just have to see how IAP/next semester plays out. If you’re thinking about applying to MIT (or maybe you just got admitted :D), know that your artsy side has a home here. For me, MTG filled that part of my soul, but you can check out all kinds of cool things happening at arts.mit.edu! 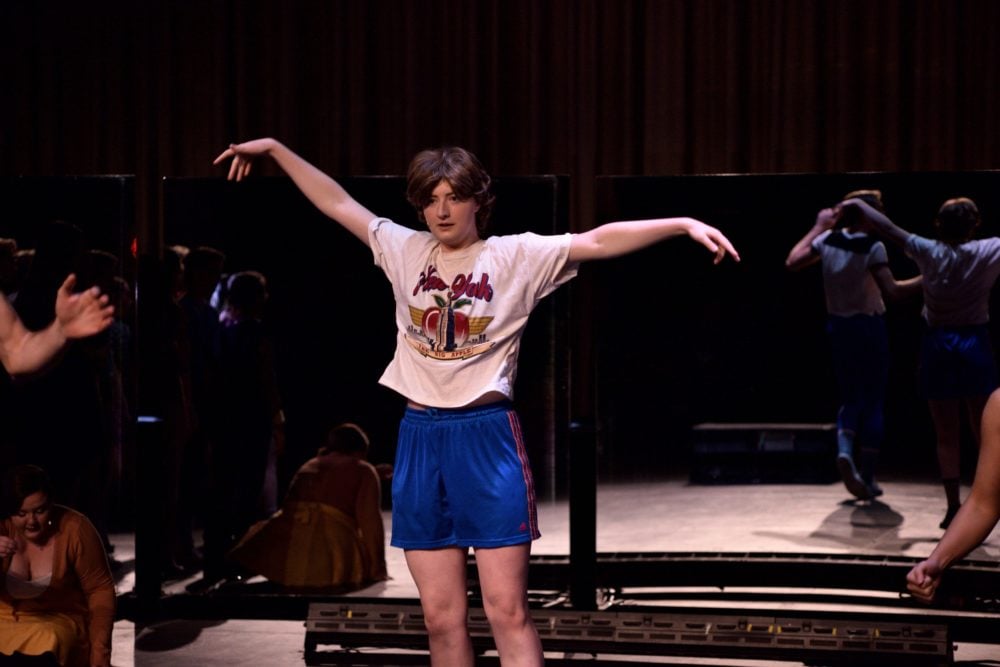 This is me as Bobby! As you can see, he was truly a majestic creature. 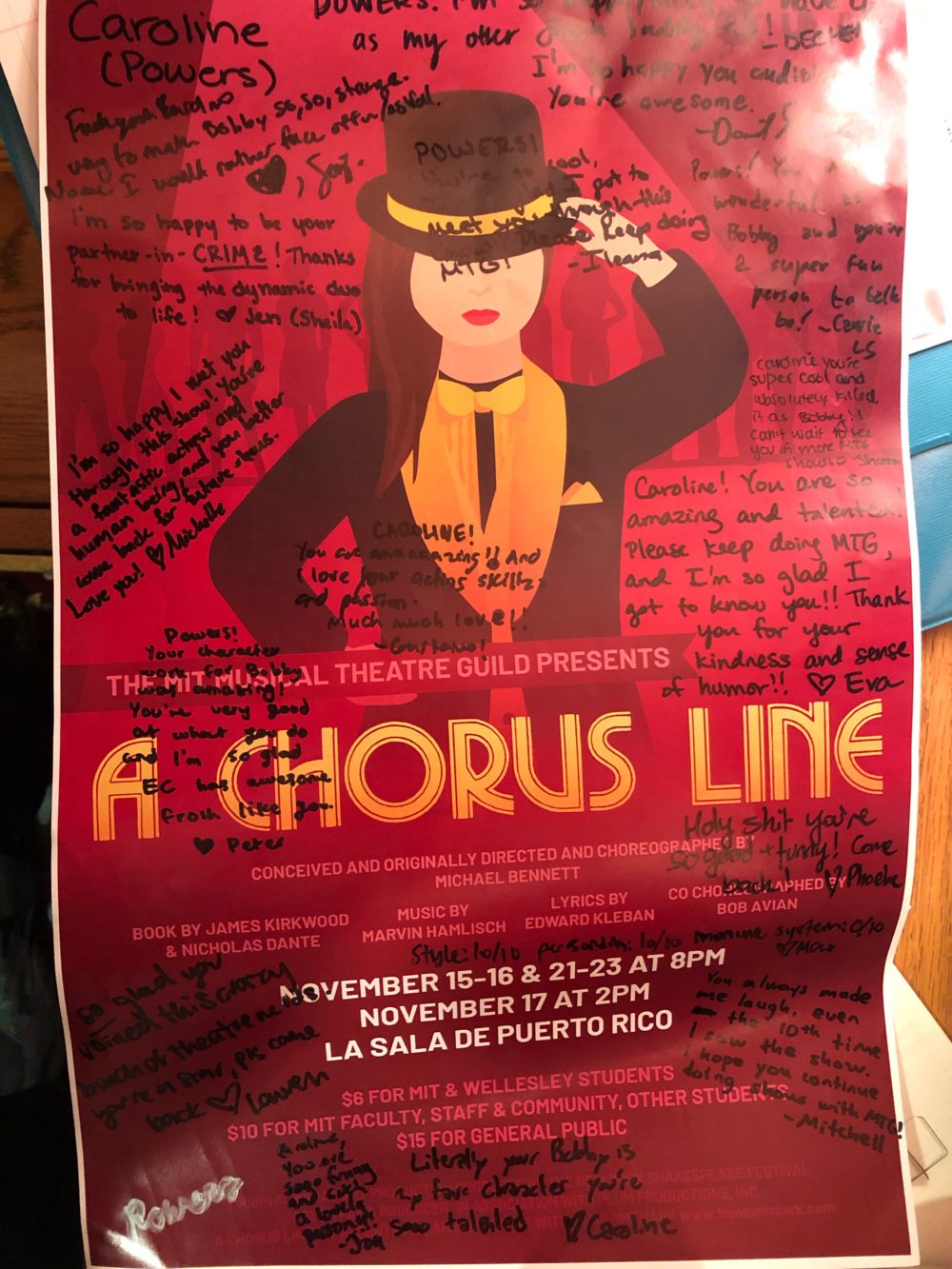 We all write cute little notes for each other when we sign everyone’s poster. Having this around makes me feel all warm and fuzzy :)