This past summer, Hasan Minhaj FINALLY made his way to my hometown on his homecoming tour. Keep in mind, this is a person I’ve been wanting to see in person since basically forever ago. Hasan Minhaj? In MY town. Blessing us with 72 minutes of geniously scripted & reflective comedy? How could I miss something as paramount as that? (Turns out I could. Two words: SOLD OUT). When I casually scrolled upon his face on an MIT Facebook event, I went hysterical to say the least. Yall! Second chances actually do exist! They’re out there! For you and you and you…

As the sun set above the MIT campus last Saturday, I excitedly made my way to Kresge. Three whole hours before the event began. Front row seats were necessary, even if it meant psetting out in the cold. I’ll have you know, I was the fifth person in line (pretty good for an amateur like myself, right?).

When Hasan finally made his way onto the stage, his face glowing with the auditorium lights, my excitement and energy was not alone. The night was spent with great laughter, deep questions and a good amount of serious reflection. After a thirty minute act geared around refugee and immigration conversations, the Q&A session gave us the opportunity to interact with Hasan as his unscripted and genuine self. We discovered that Hasan is worth ten goats, really likes chicken seekh kabobs, did Kumon till freshman year of high school, uses coconut oil (ayy, Parachute) to keep his hair on fleek and gives great hugs. And yes, I asked for you.

Me: “If Hasan were a unit of measure, what would it measure?”

Hasan: “Man you MIT kids ask the hardest questions. I don’t know, what do you think?”

Me: “Umm, I don’t know… inspiration? Yes, I would say inspiration for sure!”

Random person in the crowd: Kabobs! He would measure Kabobs!

I’ll leave it up to you as to which answer is the better one, but I definitely applaud said random person in the crowd.

The most memorable moment of the night, however, was when a student asked the following: “If you could ask an MIT student any question, what would it be?” To which Hasan replied these incredibly powerful, meaningful, heart-warming and unforgettable words (for best effect, picture him saying this with a contagious smile and big eyes):

“ What does it feel like to know you’ve made it? It must feel so dope.” 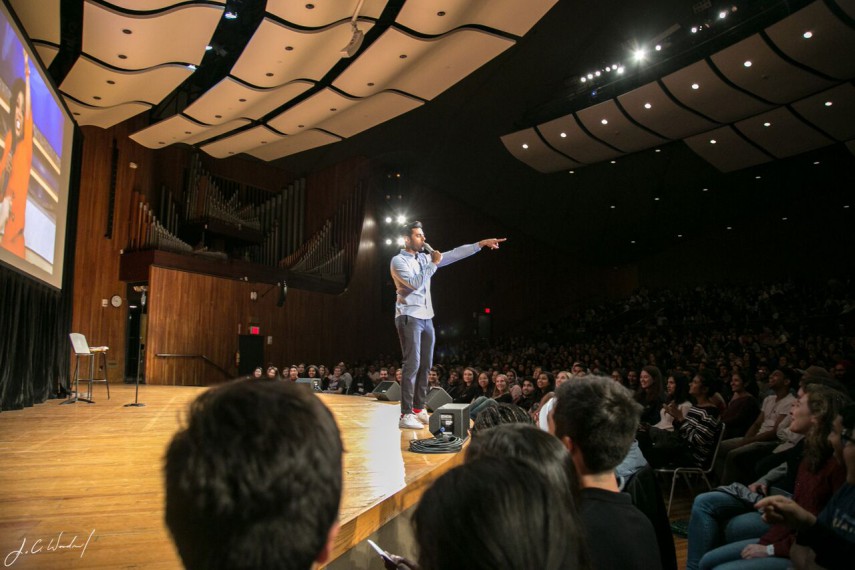 In that moment, I took a turn in my seat and looked at all the people around me. I looked at the faces bursting with pride, faces that have become familiar. And I thought to myself, you’re right Hasan. It is pretty dope. Not for the obvious reasons though. It’s the people here and their hearts that make it dope. It’s being able to have a heart-to-heart with anyone and everyone. It’s being able to stand up for what’s right without fear or second thought. It’s acknowledging the issues that scar our world. It’s working together to make it better. It’s working hard and playing hard. It’s giving support and taking support. It’s achieving the American dream. It’s sitting in an auditorium and celebrating a man that is the American dream. You’re right Hasan Minhaj, it is pretty dope. 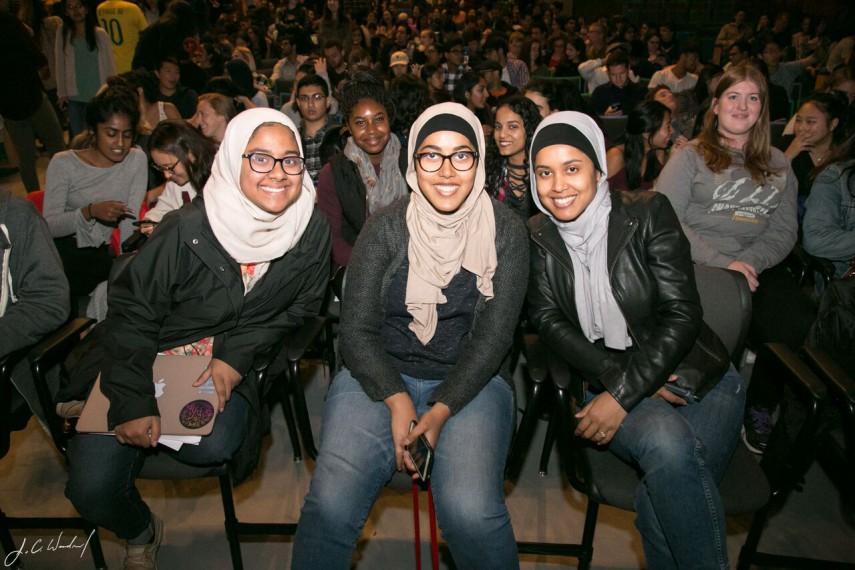 Me (left) with some cool friends. Image by Joshua Charles Woodward

With that, I think it would only be appropriate to leave you with some beautiful words from the man himself ( I hope you find in them the same magic I do):

“But if [the refugees] are willing to wait in line for 2 and a half years, then we owe it to them to look over their application because at some point someone looked over ours too.”