As I realized my mistake and erased the year, I realized that 2008 was three years ago. People born on 18 August 2008 are walking and talking all over the globe.

It was a terrifying moment.

Feeling old got me thinking about the impending school year; the end of August is coming up soon (how is this possible? Did July even happen?) and that will mark the end of my 19th summer.

Feeling old also got me reflecting on those 19 Junes, Julys, and Augusts*. I figure that you might be curious about how I spent my summers (particularly those in high school, since there’s an entire section on the MIT admissions site about it) so here’s a breakdown. If you aren’t interested in my pre- high school days, skip down to Summer 13 (the numbers correspond to my age at the time).

*It took me forever to write this sentence. Ideas on how to pluralize things like “June” and “July”? I had to stop myself from typing “Julies”.

Summer 0: I cried, and ate. And pooped and peed. Basically, not much has changed since then, except that I now do these things less frequently and with more consideration for other people.

The fact that I made faces like this is further evidence that not much has changed: 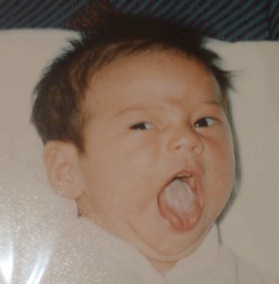 How I express disapproval to this day.

Summers 1 & 2: Daycare. I remember absolutely nothing about this.

Summer 3: Montessori school. I remember nothing, but apparently “Montessori school” means that I went around to a bunch of different stations (math, language, reading, etc) at my own pace.

In the fall, I started kindergarten.

Summers 4 & 5: Summer camp run by my school. The usual little kid stuff: arts and crafts, games, singing, dancing, running around. I received my first report card, and decorated it with a drawing that I labeled “bath cat”. I haven’t the slightest clue what that means, so if you do, please enlighten me.

Summers 6-8: Mandarin summer camp, also run by my school. I poured tea, cooked spring rolls and dumplings, sang songs in Chinese, and dressed up as a Chinese opera singer. At some point, I probably learned some Mandarin, too.

Summer 9: My family moved to London, and I started Middle School in the fall.

Summers 9-11: Sports camp, run by my school (oh, to be young and athletic once more…) I remember fencing (foil), archery, football (“soccer”), tennis, capture-the-flag, and missing the bus to the golfing range; I was super upset, because I had to spend the day playing with the little kids, and we all know that being 9 years old means being above that.

Summers 12: Basketball camp. Not a clue why I decided to do this.

It’ll be difficult to do justice to this in a few sentences, but I’ll try. This is an academic summer program: you take one or two three-week long college-level classes, some of which you can get credit for (I didn’t do any of those.) There are six-ish hours of lecture during the day, and a bunch of different activity options in the late afternoon (“cloud-watching” is there pretty regularly, as are “acting improv”, “competitive number counting”, and “fun with duct tape”). There are campuses all over the US, although everyone knows that Lancaster (PA) is the best site*. The classes I took were (in order): Archaeology (which I signed up for in order to study dinosaurs – whoops), Astronomy, Cryptology, and Game Theory.

*Really. Ask anyone. And by “anyone” I mean “me and the people I went to camp there with.”

I loved CTY. I loved the classes, but more than anything I loved the people – and I’m still friends with a number of them today. Occasionally, I bump into a couple of my fellow Lancaster-ians on MIT campus.

I spent lived with a host family in Antibes that didn’t speak a word of English – and my conversational French improved more in those two weeks than in years of classes at school. You can’t compare an in-the-classroom learning environment with actually going to the country and being forced to speak the language in order to communicate.

There were 36 of us on the New Mexico campus, out in Socorro (more commonly known as “The Middle Of Nowhere”). During the day, we had lectures on topics in physics, astronomy, calculus, and programming (Python). We were divided into teams of three, and each team picked a near-earth asteroid (2002 KL6 – I LOVE YOU! And miss taking pictures of you!). Over the six weeks, we collected observations of our asteroid (the 1-3am observatory session made for great team bonding experiences) and used our newly-acquired physics/astronomy/calculus/programming skills to calculate its orbit. That last night, most of us pulled all-nighters putting our final orbit determination report together – but man, was that sunrise beautiful. Another SSP alum is our very own Chris S. ’11 :)

We hosted guest speakers, ranging from a CIA case officer to a guy doing research on parisitic infections at the University of Washington. We (well, some of us) played Settlers of Catan at 2am, and stayed up all night psetting (a good preview of MIT life). Like CTY, I made friends here who I’m close to even now – and I see my old room-mate around MIT :) (hi Demetra!)

Also, this summer marked the first time I saw the Milky Way – or any dark night sky, for that matter. I cried (don’t judge – IT WAS BEAUTIFUL, OKAY?).

For more information, here’s the website. There’s also a nice summary on the MIT Admissions site.

I spent a summer back in New Mexico (can’t get enough of that place) working in the Cognitive Science department of Sandia National Laboraties. I was the research assistant to the niece of my old Robotics mentor (woo team 1884!) – he heard of the job posting, remembered that I was interested in neuroscience (I spent half my time with him babbling about how brains are awesome), and encouraged me to apply. I lived with a stranger for seven weeks, went to work with strangers – and had such an adventure that it took TWO BLOG POSTS to describe (here and here).

…which brings us to now! I’m working with a grad student to analyze huge datasets of genes from people with various stages of colorectal cancer: we use statistical tests and biology software to try and identify pathways that might be associated with the disease. Right now, most of my time is spent learning, and coding in, Perl, which has been, well – let’s just say that I think I scream more while coding in Perl than while riding a rollercoaster or watching a scary movie. And that’s saying something.

So, those are the 19. All have zipped by – soon, it’ll be time to start thinking about Summer 20, which is hard to believe.

I hope you’re having a great summer!