A few dozen children stand fidgeting in lines before us, their eyes squinting in the glare of the merciless sun. There’s a myriad of expressions on their different faces that I’m trying to decipher. Most children are excited, smiling shyly. Some have an expectant look (maybe they’ve caught a glimpse of the soccer balls). Some are simply curious. And then there are the blank stares – the heavy gazes of large eyes that have tasted a life beyond what my sheltered palate can even imagine. The solemn looks that you can’t prepare for. The looks that instinctively stop you in your tracks because it doesn’t make sense for that emptiness to be emanating from such a small human being. 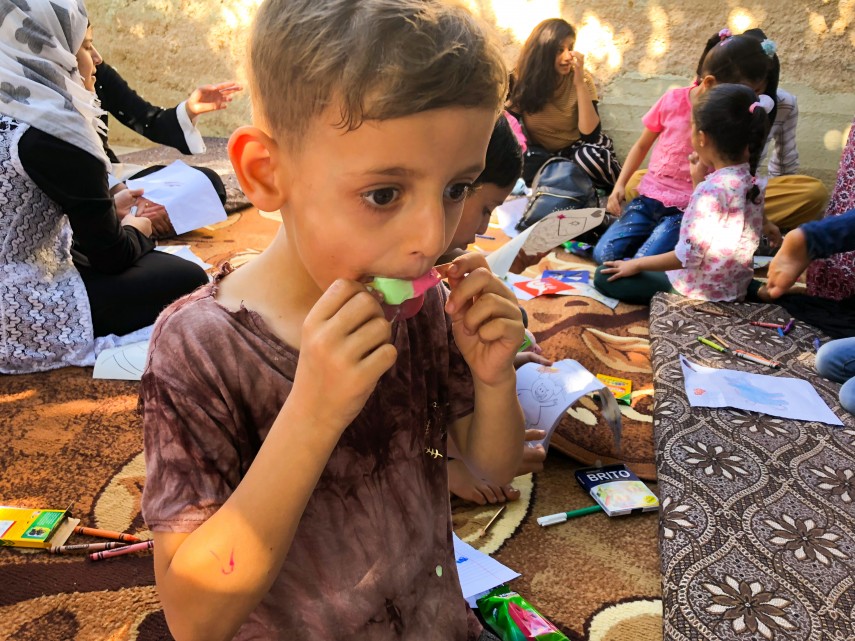 We had just stepped out of the bus that had brought us from our hotel in Amman. As our shoes fell upon a dusty ground surrounding the orphanage for Syrian refugees, the children sang a welcoming song in Arabic for us. The head of our group began to use the translator to address them. He had been coming to this orphanage, giving donations, and implementing new programs for multiple years now. Before getting off of the bus he had reminded us; these children had just lost their parents, their homes, and their country. I thought it would be only reasonable for them to lose their hope too.

However, when we were outside he asked “Who is happy here?” Milliseconds after the translated version was relayed, the children broke out in a cheer and their hands shot up.

“What makes you happy?” Some children climbed over each other and raised their hands in the classic “Pick me! Pick me!” way.

A little boy was chosen. He had flaxen hair but skin tanned by the sun. He also wore a wide, toothy smile. He said to the translator, “I’m happy because I’m learning to memorize the Qur’an.” He then recited a part of it to us with a voice uniquely both delicate and strong.

His delight in something so simple. His unbroken faith despite everything. I was shocked.

I knew then and there that while I might be giving out supplies, building bathrooms, and helping to treat people on this volunteering trip, I would also be gaining something substantial. This was hour 1 of day 1 of a week that was somehow as beautiful, inspiring, and reassuring as it was heart-wrenching, heavy, and concerning.

Standing in front of those children, with my clothes being flicked around by a familiar feverish wind and bright, photo-bleached blotches covering my view when I closed my eyes, I knew I was back in Jordan (and I honestly say this with an affection that startles me). I guess I should backtrack a little. Last summer, I did MISTI Jordan, working at a pharmaceutical company. That summer was, in short, an amazing epilogue to freshman year, an adventure featuring the expected moments (floating in the dead sea), the treasured moments (sprawled on the pitch black sand in Wadi Rum, gazing at shooting stars for the first time with a friend who is no longer with us), and the wild moments (like being stranded at a border and having a meeting with an ambassador coincidentally right before an attempted stabbing). An array of experiences indeed, but there was something missing from my 9-to-5 that I couldn’t quite put a finger on until my first day volunteering.

This year, I returned to the area that I grew so fond of with a different purpose. I came as a volunteer with an organization called Rahbar Trust, a charity co-founded by Dr. Usman Mustafa, an interventional cardiologist, under the belief that helping those who need help is not an option; it is an obligation. For years, Rahbar Trust has been doing extremely valuable humanitarian work, such as sourcing small interest-free loans, holding eye surgery clinics, and organizing major relief trips in the U.S., Jordan, and Pakistan for refugees and those living in poverty. This year, for one week, we serviced Syrian refugee camps and orphanages across Jordan, from south of the Dead Sea to the doorstep of the Syrian border.

On that first day in the orphanages, after taking in the state of everything for a little bit and visiting the tiny classrooms, we sat down and colored with some children. Most of them quickly crowded all the new supplies, but there were a few who solemnly and silently watched at first. My broken and extremely formal Arabic (thanks Harvard) limited our communication partially, however I still had some grammatically atrocious but meaningful conversations with the kids. The hardest part was leaving, but it was good to know that they had enough supplies now to last them a while and that they would probably be visited again next year.

Still naïve, I didn’t think that the refugee camps that we would be going to could be a lot worse than the orphanages we visited on day 1, but day 2 proved me very incorrect. We went to a camp in the middle of the desert that was not officially recognized by the Jordanian government. Under the sweltering sun, it lacked any shade except inside a few large crate containers that served as classrooms to the children. Besides that, there was a monochromatic view as far as the eye could see of beige sky and sand, dotted with little tents made of various plastic sheets and bags that comprised their homes. 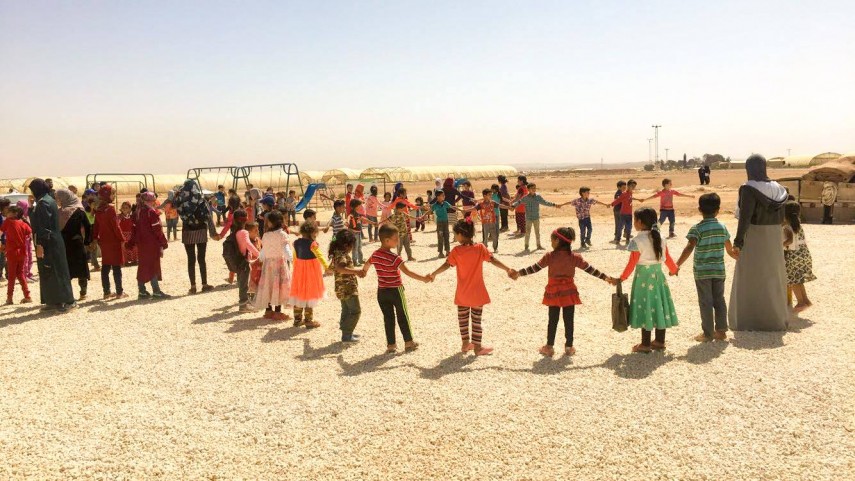 I started to play soccer with the kids, but within seconds I was severely parched. The toll that their circumstances were taking on the kids was evident in the way they acted and dressed so differently from the children we had seen earlier. A girl came up to me and asked me for my water. I knew that if I gave mine to her that I wouldn’t be able to drink it after, but I figured she needed it more than me. A few seconds later she instead asked me to come with her and brought me to a much younger girl, who was sitting down, panting. She only drank after her sister had enough. I saw this type of scene multiple times, with kids who were feeding and caring for infants. When we handed out sanitary packets to the tents, a lot of the families invited us to come inside the plastic bag drape into their little homes. It was crazy thinking that some of these families in Syria were either well-off or doing okay but now had nothing but a few pairs of clothes, these tents made of plastic tarp, and those left of their families.

The rest of the week was full of more simultaneously heartbreaking and heartwarming instances like these as my role shifted more towards clinical volunteering. There’s so much I want to say about the state of medical care there and the many cases I saw that could’ve been easy fixes if there wasn’t such a huge disparity of medicines and equipment. But in writing this (and trying my best to keep it short I’m sorry!), I guess I wanted to focus more on the observations I had those first few days – when I, like my shoes which had just begun to be spray-painted with the rust-colored dirt and sand, started changing.

As I write this, it’s 3 AM (MIT prime writing time, I know) and I’m sitting in the waiting room outside an Intensive Care Unit because a person I love is unfortunately not doing well. And no, I didn’t take it well at all at first. But in reflecting on our lives a bit there’s a sense of peace that has come over me. A feeling not dissimilar to moments of hardship that I’ve faced at MIT, when everything seems to be working against you, and you try to pull a Dory and “just keep swimming.” But after this experience I take a deep breath and I’m inspired by how much faith those parents and kids had. How even children who at first had blank stares eventually started coloring and opening up. I think about the blessings and privileges I’ve had to even be at this point. To even get to be in the shoes to say that one day I hope to become a doctor and treat people exactly like them, who are forgotten and lack access due to forces entirely out of their control. Because the toughest situations, for me, have been tough because I’ve been blessed in some way beforehand, whether its dealing with a crazy workload here at MIT or being able to have my loved ones treated in places that have all the equipment necessary. This summer is not ending up like the one I planned, but that’s life. And the most important thing that MIT has done for me has not been academic; MIT has helped me find the experiences and people I need to figure out what I want to do and to grow a resiliency and adaptability that any curveball better watch out for.

One last thought: MIT gets crazy busy sometimes. Believe me I know. But if there’s two things that I hope we all try and remember this summer: take care of your health and take care of others, however you can. 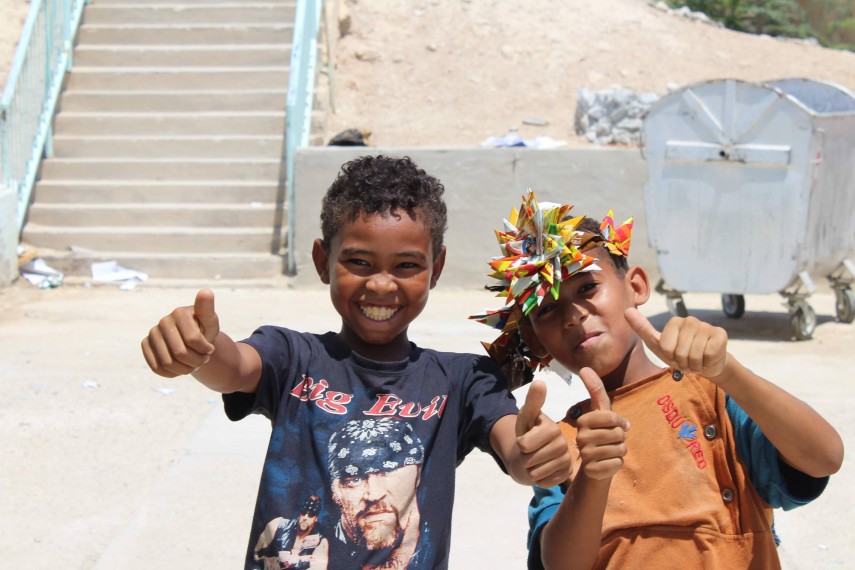