It’s been four days since the beginning of sophomore year. That means a few different things in my already congested brain. One, things are about to get incredibly busy again (and after three months of relative relaxation and down activity, I’m not entirely sure I’m ready for that). And two, summer is officially over. And with that, it is time to bid the 8,726,400 Seconds of Summer guest series adieu (not going to lie, it’s a bittersweet feeling).

Approximately three months ago, I stepped out of a six hour safety training session. As I sat, wheeling my chair back and forth, my mind had ran thought marathons of all kind. It was in that auditorium-style hall that the idea for 8,726,400 SOS first sparked. Since then, seeing it coming into fruition has been an enlightening journey.

When I look back at the blogger I was at the beginning of freshman year and the blogger I was at the end, I notice a huge difference. While I had started off with the goal of piecing together my life at MIT into words, I had slowly become someone who wrote with reception in mind. Whenever I published a blog post, I would check it every single day. I would read the post over and over again until I convinced myself that I was content with it. I constantly monitored the comments. How many people were reading my posts? How were they responding to it? Was the post successful?

I became slightly obsessed with the way my writing was being received, to the point where it began to interfere with the pieces I produced. To the point where I wasn’t every fully content with what I was writing. Since then, I’ve spent a lot of time trying to figure out what the key to satisfaction is. The answer I’ve found for myself has to do with intention. You can’t ever control how others respond and feel about the things you produce, but you can control the reason for production in the first place. So as long as I can identify an intention for myself and be a 100% sure of it, interpretation becomes secondary.

That realization seeped into the early beginnings of 8,726, 400 SOS. I’ve always loved the blogs for being a personable platform. A platform that brought together people from all walks of life to peep into the constantly changing cosmos that is MIT. I knew early on that I wanted to be able to expand this platform beyond just my own stories to include the stories of the people that synergistically make this cosmos what it is. The intention behind 8,726,400 SOS naturally lined up with that. Summer is a time for MIT students to spend three months in whatever way life directs them to. Some students rejuvenate themselves at home, some struggle through the mediocre, some find themselves at dream internships and others discover something new in the unfamiliar. Regardless of where it is that they were and what it is that they were doing, their experiences are all equally unique and transformative. And that is enough reason to say that their experiences belonged on the blogs.

Call it a lack of self-confidence, but I’ve always been the type of person who pitches my ideas out loud to others before pursuing it. So I naturally gave my 8,726,400 SOS spiel to anyone that listened. It came down to my parents, close friends and the bloggers. The idea of bringing together different stories was an attractive one, but my conversations with others underscored many aspects I had not considered. How do I make the opportunity of sharing on the blogs as open as possible to MIT students without it getting chaotic? How do I make sure that there is variety to the content that is submitted? Would the series gain momentum?

As I often do when left with an unsolvable pset question, I sat down with a fresh new sheet of paper. I wrote down all the different aspects I needed to address. As I worked on tackling one point after another, I reached out to others for suggestions and guidance. In assembling it all together, I reached a plan for 8,726,400 SOS that wasn’t perfect but as good as it seemed to get.

I was initially a little hesitant to use Google Forms as my means of collecting submissions. I really wanted to make sure that every submission would make it to the blogs. I wanted to be able to follow along every story until it was ready to be published. I very quickly associated Google Forms with chaos. I envisioned that I would get a huge collection of submissions, more than I could logically put on the blogs. But sometimes, you have to take a leap of faith on an option because, well, no better option clearly exists. And that’s what I did. I took a leap of faith on Google Forms telling myself that I would deal with the inflow of submissions as it came. I reasoned that the people submitting blog posts would self select themselves. So by nature, the platform for submission would be open, but controlled.

When it came to tackling the question of content variation, the solution seemed so obvious coming out of my friend’s mouth: break the summer down chronologically in a series of themes and have students submit to that theme. And so I pieced together the a timeline of different summer themes for content control.

The final iteration of the Google Form looked like this: 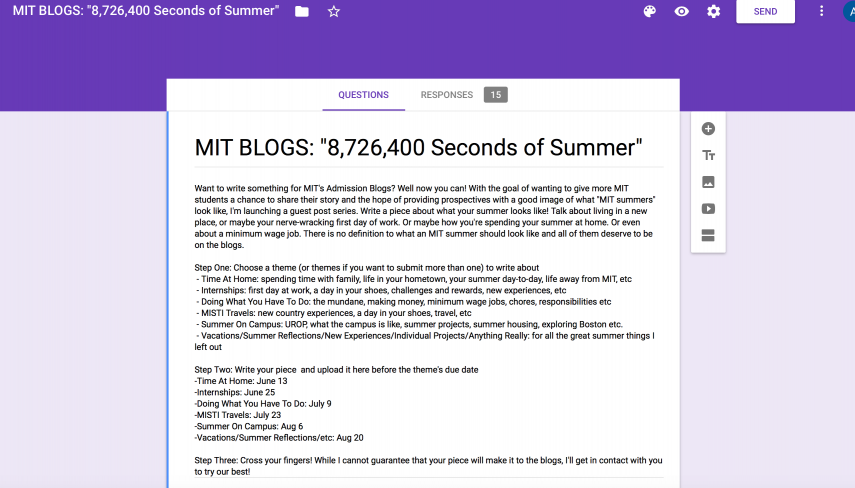 Once the Google Form was ready to go, it was a matter of getting the opportunity out to as many MIT students as possible. There was really only one obvious way to go about that: dormspam! Essentially each MIT dorm has a mailing list of all of their students. So if I send out an email to all of the dorm mailing lists, I (in theory) should reach all of the MIT undergrads. I was a little hesitant with this at first. I had never dormspammed before, but have been on the receiving end a countless amount of times. I was worried the email would be disregarded or considered annoying. But I dormspammed anyways, because I trusted the students’ love and connection with the blogs.

Since then, running 8,726,400 SOS has been incredibly enjoyable. From routinely checking for new submissions to reading all of the pieces to reaching out to the students that wrote them, it’s been refreshing. Writing for the blogs had become something that I subconsciously had taken for granted. And seeing all of the students genuine anxiety and excitement to write something for the blogs was humbling.

Taking A Look Back

In all of the stories that have been collected through 8,726,400 SOS something really beautiful is seen. We often have certain expectations of life. We expect certain things to happen at certain time frames. But what we see in the stories of these students is that summertime is different for everyone. And regardless of where life has taken them, it forces them to make sense of the world both within and beyond. And in sharing their reflections, thoughts, and experiences a point is made: that summertime (like life) has a steering wheel of its own. All we can do is roll down the windows and enjoy the ride:

Self-Discovery Within An Internship
A Summer With Tulip Interfaces, Inc
Massachusetts To Michigan
Killing Time…Not Really
It’s Coming Home (By It, I Mean Me)
A Smile Worth 1,550 Words
When in South Africa
Got Solar
The Conscious Subconscious
What Do Those ROTC Kids Do During The Summer…?

Every Story is a Story That Ought To Be Shared

As much as I wanted to get every single submission up individually on the blogs, it proved to be more difficult than I thought. But as I’ve said before, every story is a story worth sharing. Every submission is a submission that deserves to be on the blogs. That said, I’ve got a last few beautiful summer stories to share with you. I hope that you find in them the heart and soul that I do (posts embedded via Google PDF viewer, if it doesn’t pop up you can also access the posts here).

I can’t thank all of the people that have helped with 8,726,400 SOS enough. From my parents who supported my initial light bulb moment to my friends who patiently helped me crank out the details to the bloggers that helped me bring it all to reality. To all of the students that took time this summer to put together the blog posts, you guys are absolutely amazing and the sole reason this guest post series came to be what it was. And lastly to the readers who have spent parts of their own summers reading these posts and reaching out with words of encouragement and constructive criticism. I am forever grateful.

With that, 8,726,400 SOS says it’s goodbyes. At least for now. In the meantime, I’m always eager to receive feedback on the series. What worked? What didn’t? What was your favorite post? Any ideas for making the series better? What else would you like to see? As always, love a conversation in the comments below.