We did it! Over the past three weeks, the MIT Solar Electric Vehicle Team competed at the 2018 American Solar Challenge (ASC). Our newest vehicle, Flux was tested, scrutinized, and pushed to its limits and after many stressful nights and over 1,700 miles on the Oregon trail, the finish line was crossed! 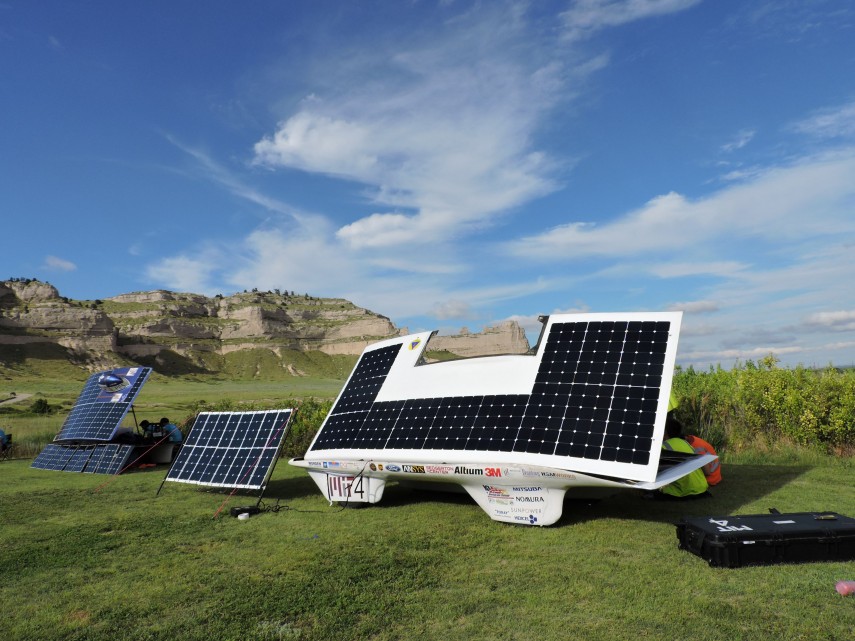 On the afternoon of July 3rd, the team members frantically packed up every tool and potentially useful item we had in our shop at the Edgerton Center- no matter how heavy or dirty it seemed, and we began the long drive to Hastings, Nebraska, with Flux securely loaded into our trailer. Several gas station lunches and toll plazas later, we finally arrived at our destination, where we met more team members who flew in for the competition. After a few team discussions and a long night of last minute inspections of the car, we were ready to begin. The American Solar Challenge is a biennial solar car endurance Tour which takes teams across more than a thousand miles of open road. This event, however is preceded by a track-based qualifying event, the Formula Sun Grand Prix. The first segment of the competition Scrutineering portion of the Formula Sun Grand Prix (FSGP) began at the Hastings Motorsports Park on July 6th. During this section of the event, we had to demonstrate and explain how our designs for Flux complied with the regulations for the competition as well as pass dynamic tests such as hard brake tests, the slalom test and figure 8 tests. The event started out with a lot of confidence as we got ‘Greens’ for most of the required sections, however, it quickly turned to panic. What started out as a small manufacturing problem in our composites cascaded into problem after problem with our mechanical system. After three long (and I mean sleep in shifts kind of long) days, we were able to confidently pass the tests with greens across the board and a much nicer car than the one we arrived with. There is no better way to learn engineering than a better engineer tearing your work apart! Special thank you to the system inspectors with ASC for teaching us not only good engineering practices, but some life lessons along the way. 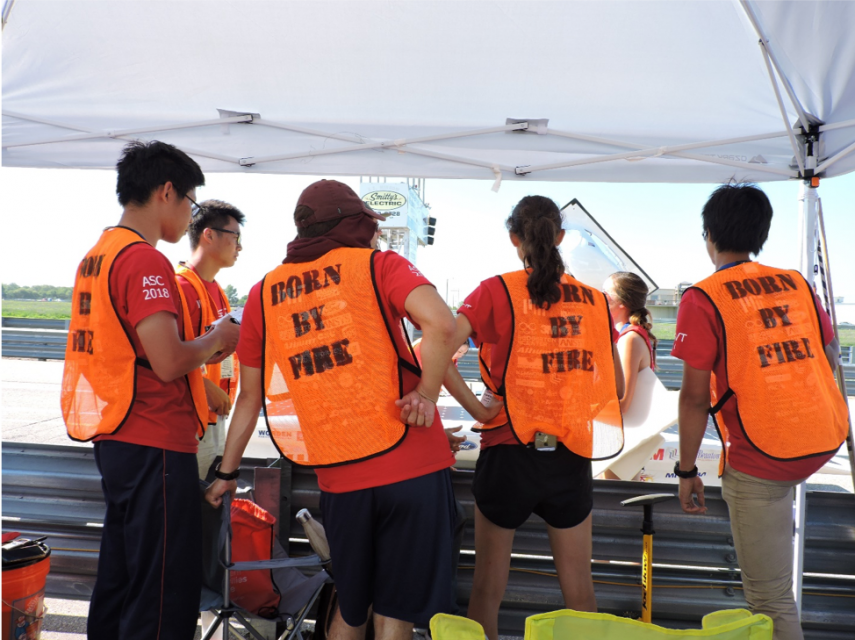 Nothing says Solar Car like the fire of deadlines. PC Ashisha Persad

After the scrutineering portion of the event was completed, we moved on to the three day Track event, where we needed to complete either 96 laps in one day or 143 laps in two consecutive days to qualify for the American Solar challenge race. On Day 1, it took less than 20 laps for us to realize our first problem. After a spinout (everyone is okay don’t worry) and a lot of tires consumed, we decided to stop for the day and problem solve. That was when we realized in all of our modifications, we introduced a bump steer of scary proportions. After many hours of brainstorming and some clever insight from one of the inspectors, we were ready for the track again the next morning! Where the previous tires lasted a whopping four miles, after our fixes, we never had to change tires again during the race (and proceeded to run them 1700+ miles during ASC). By Day 2 of FSGP, we had racked up enough laps to qualify for ASC and despite all the problems we encountered during scrutineering and FSGP, we placed 4th in the Single Occupant Vehicle Class! 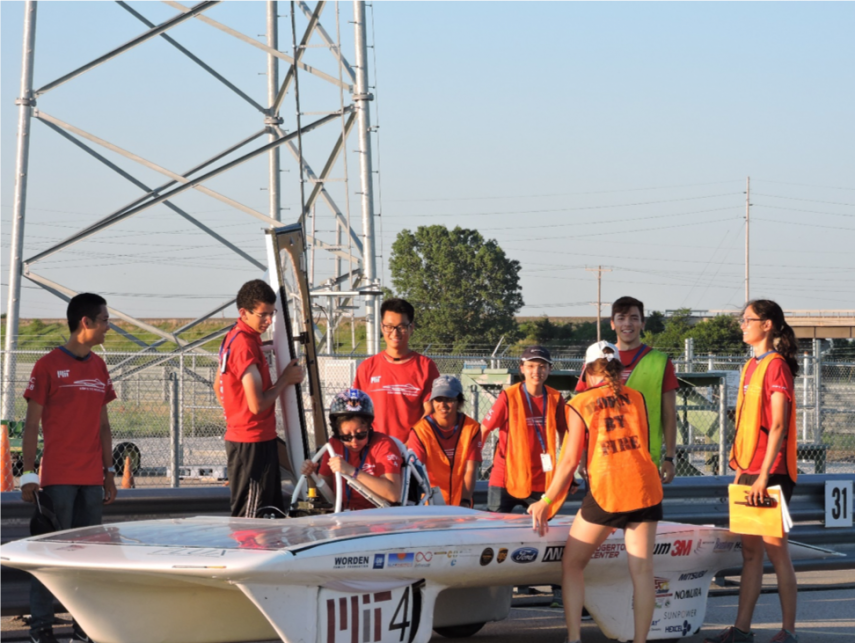 The moment we qualified for FSGP

On July 13th, we finally had a rest day where we got to display our vehicle to the public and talk to other teams. We made good use of the day, doing some long overdue laundry and preparing for the race ahead. On July 14th, the race portion of the American Solar Challenge began, in Omaha, Nebraska. For the 9 day long tour, you can begin with a fully charged battery pack, but after that you are only allowed to charge the pack from the solar array. The race day begins with a two hour charging period in the morning from 7 am to 9 am, then you are allowed to drive until 6pm, followed by a charging period from 6 pm to 8pm and then the battery pack is impounded by the observer that travels with the team. The starting order of each team is determined by the total number of laps acquired during the FSGP track event, and all the teams who qualified for the race begin from the same location and are released one minute apart. Each team races in a configuration with a lead vehicle then the solar car, followed by a chase vehicle. The lead vehicle is usually in charge of navigation and calling any important features they see ahead, such as speed limit signs – though this is a race, we still have to comply with the traffic laws, while the chase vehicle is able to see the solar car and the members inside do strategy, calling target speeds. At all times all three vehicles are in radio contact and there is also a common ASC channel that other teams can use to contact each other, to be used if they need to coordinate when passing another team.

During the event, there are either checkpoints or stage stops which are locations that the teams must get to by a certain time. However, other than that teams can choose to stop wherever they desire. As the competition began, we hoped that the stressful period was over and it would be smooth sailing, but while the car ran like a dream, the weather was far from ideal. The first few days of the race brought clouds, rain, and storms to the streets. After leaving Casper WY, we had to pull over to the side of the road and wait for the lightning of an oncoming storm to calm. Luckily we did so, for moments later, hail (in July!) began pelting the tarped car as we sheltered from the wind in the lead and chase vehicles. Fortunately, Flux survived the storm with minor scratches and the sun carried us through the second half of the race in full force. 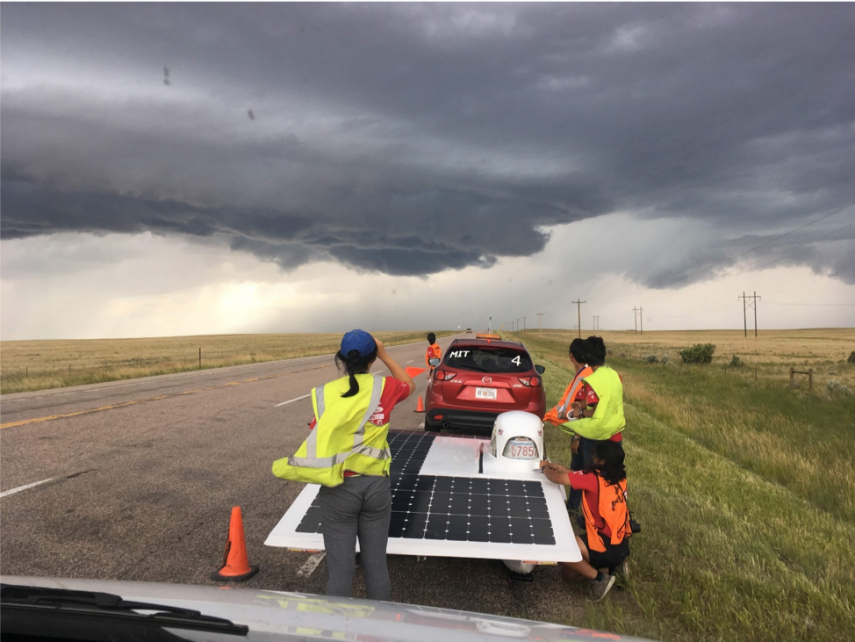 Right before the hail struck

All in all, the race was an incredible experience for everyone on the team and an inspiration for the future of MIT SEVT. We found ourselves faced with some of the most beautiful, and bizarre, scenery Mother Nature has to offer along the route and were honoured to be a part of such a wonderful race. We ended it all in Bend, Oregon, in 5th place and couldn’t be more proud. 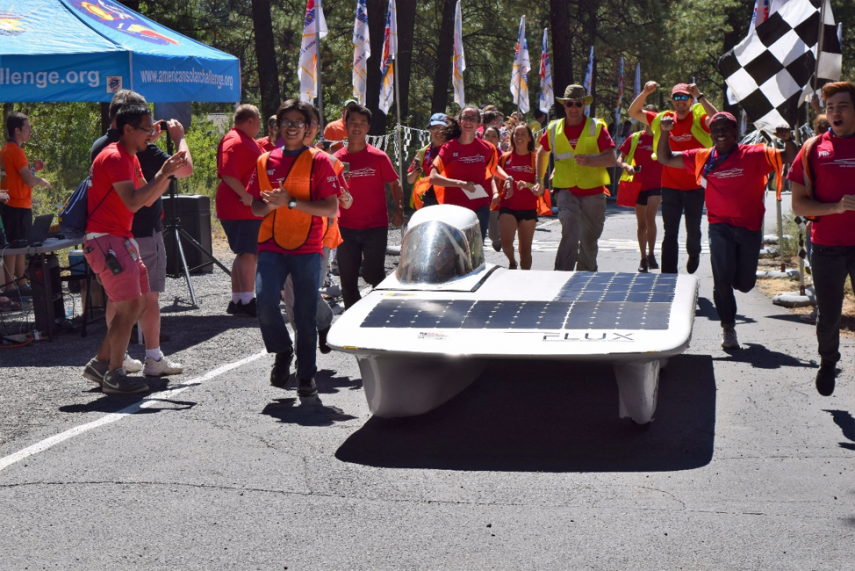 At the finish line in Bend, Oregon

Finally, we cannot express our gratitude to our generous sponsors and to everyone who made this happen. We are a small team of undergrads would never have reached this point without your help. Additionally, thank you to ASC volunteers and all of the teams who participated in the race. We learned more than we could have imagined and will never forget the support and encouragement you provided. 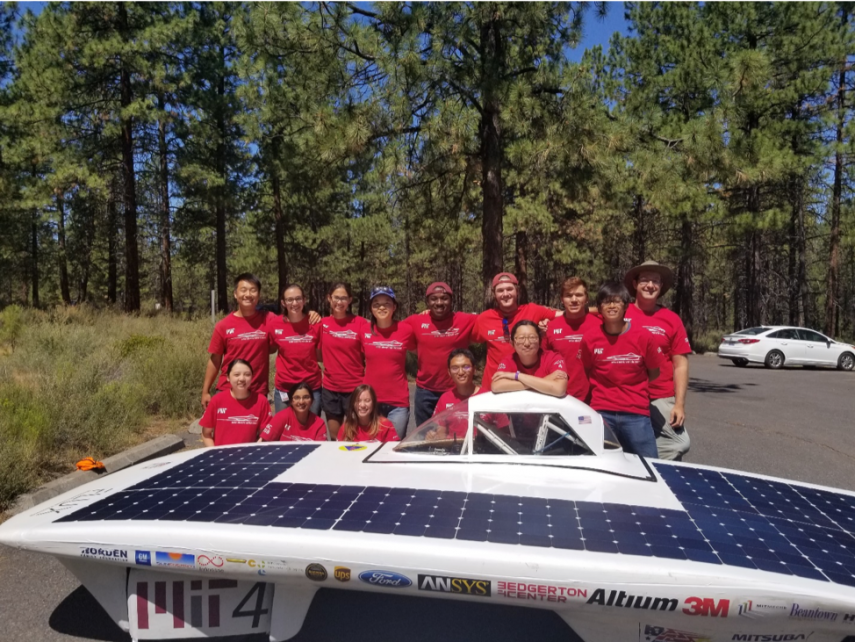 Some of the team members at the finish line