For most of the semester, I’ve lived and breathed in the ever-growing and never-shrinking universe that is Organic Chemistry. Time and time again, I would spend hours locked away in a corner of the library staring at my laptop screen, scrolling through pages and pages of Janice Smith, constantly drawing and re-drawing mechanisms of all kind. Remember Afeefah, the arrow goes from the nucleophile to the electrophile. Enantiomers can’t be overlaid. And hydroboration oxidation is Anti-Markovnikov. I really have been living in a universe of Organic Chemistry. To the point where Orgo and real-life appear to be well, not that different.

The last question of an Orgo exam is always predictable: the infamous synthesis question. The task is eerily simple. Make the following molecule with the given starting materials. You have a whole toolbox of reactions to use. If you’re able to pull out the pertinent reactions from your memory, congratulations, you’ve been blessed. Can’t remember the reagents for the reaction you have in mind? Better luck next time. Eerily simple. Because you either get it or you don’t.

Recently, I’m dealing with a new kind of synthesis problem. To label it “the synthesis of life” or even “the synthesis of my future” is unfavorable for a few reasons: 1) it’s as cringe as it is cheesy,  2) it’s terribly frightening and 3) it makes me sound like a try hard. But in the process of dropping a class (Jeremy thinks I should call it “The Class That Shall Not Be Named”), and somewhat restructuring my coursework for the semesters to follow, I can’t help but look at the path ahead as one big, incredibly complicated synthesis question. A chain of reactions that build of one another in order to move towards the desired product. One big difference? Often times you don’t know what the starting materials are. You simply let life carry you from one reaction to the next, hoping for the best.

So what’s the final product for my super complicated synthesis question? I’m not entirely sure. We might be looking at three weeks from now, when finals will be over and I’ll be eating my grandmother’s home cooked food in India. Or maybe we’re looking at three decades from now. But to keep it simple, we’re going to leave the final product more or less ambiguous. Just an Afeefah that’s further along the timeline. Still a disappointing 5’2″. Slightly older: 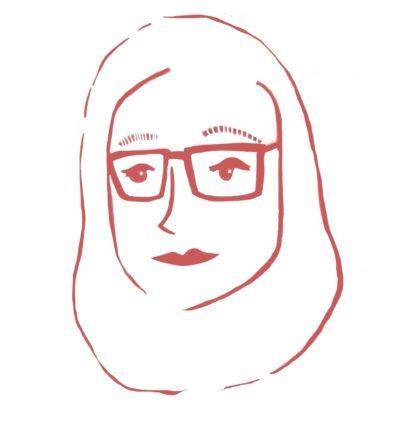 Now, our toolbox consists of just one “reaction”: decision-making. One decision creates a product that calls for yet another decision to be made. And that also seems a bit frightening. But again, we leave the decisions ambiguous. Maybe it’s simply whether I should go to bed at a decent time or squeeze in another episode of Gossip Girl. Or maybe it’s figuring out whether or not I should drop a class. Decisions, regardless of density and volume:

Now, for the strategy. There’s only ever really one way to successfully solve a synthesis question, with the retro synthesis arrow. Rather than solving the synthesis question in the forward direction (essentially starting from the starting material and moving towards the final product), you go the other way. You start at the end, and trail your way back to the beginning. It makes the solution significantly less complicated to get to.

There’s More Than One Answer

Now putting it all together, you get something that looks like this: an interconnected web of decisions that lead to more decisions that ultimately lead to your final product. 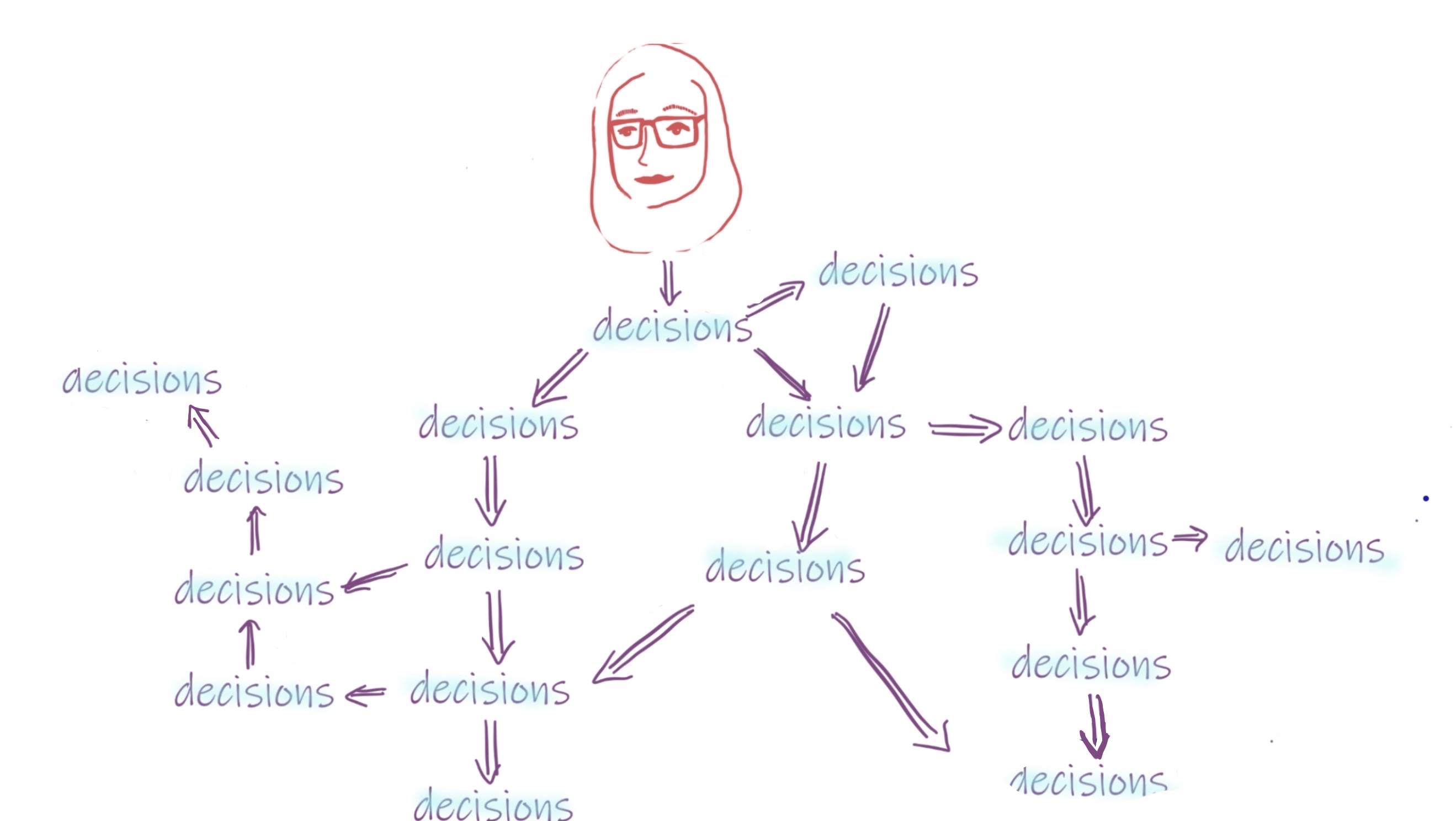 There is one big thing to notice here. With the arrows going in all directions, we can start at one decision (or another) and still somehow make it back to our final product. And that, my friend, is the beauty of the synthesis questions. THERE IS ALWAYS MORE THAN ONE ANSWER. More than one way to produce the final product.

In the midst of making the biggest decision of the semester, I needed a reminder of that.

Even though I’m almost two years into life at the Institute (wait what Afeefah? it’s really been two years? same. same.), every day still brings with it an opportunity to learn a little bit more about myself. This semester, it’s been about exploring my upper boundaries. Exploring just how much I can add to my system before overheating. I quickly discovered that taking four classes, two seminars and UROPing 15 hours a week resulted in very v e r y l o n g d a y s.

And while leaving my dorm at 8:30 every single morning and coming back to sleep at 2:00 am was doable for the first month or so, I eventually developed what I like to call “brain blur.” You can’t expect your brain to constantly be working at optimal performance if it’s not getting enough sleep and not being fed enough glucose. I was making it through all of my classes, churning out all of my psets, but something was fundamentally wrong. I didn’t have time to really sit down and enjoy a meal. I let go of my workout routine to make more time to study. I barely saw my friends anymore. Phone calls home became shorter and less frequent.

There’s no point in being dishonest. I really truly believed that it would all be worth it. You’re saying no to going out to dinner with friends? It’s ok Afeefah! You have a midterm coming up, you need to focus. And so I reasoned with myself over and over again, until eventually midterm grades started coming back and something just didn’t seem to make sense. Why was I barely passing my classes when school is all I was focusing on? But the next round will be better, right? And so I kept going on, convinced that just a little bit more effort would change things around. This is when raw exhaustion replaced the “brain blur”. I was tired. Tired of making so-called sacrifices. Tired of running around all day. Tired of not seeing the results I wanted to see. But I was an optimist. I refused to believe that things looked as bad as they really were. I cried out my exhaustion, wiped away my tears and moved along.

Things changed when my tutor suggested that I drop a class. I was very much aware that that was a possibility, just not a possibility for me. Naive Afeefah believed she would never have to fill out a drop form, because things would always go as expected. That is, until they don’t. The more I let the idea marinate, the more it just seemed to make sense. I scheduled a time to meet with my TAs, met up with my advisor and made many phone calls home. Drop date was quickly coming up, and making a decision made me anxious. For many nights, I chose to simply go to bed or goof around with friends. Because I couldn’t pull myself together to make a decision.

People told me a lot of things. About how I need to take care of myself before my academics. About how even if I drop the class, I’ve learned so much. About how the class will be significantly easier the second time around. About how realistically speaking, a bad grade could interfere with my ability to get into grad school. About how I could totally recover from this and graduate on time. I listened to it all.

I plan to take the class again next semester. And I plan on CRUSHING it. Because, this semester hasn’t been a waste at all. Aside from being exposed to all of the material, I’ve learned a lot about who I am as a student. About how I can’t put other things to the side to focus on my academics, because everything is interwoven and connected. I need to be able to sit down with a friend and catch up to be able to do a pset. I need to blow off some steam by weight training to take a test. I need to eat a full meal to be able to write an essay. Success isn’t sacrificing a part of yourself to elevate another part. It’s making sure that you can balance and recognize every single part of who you are. It’s being able to really understand and listen to yourself.

And in the midst of all of this, it’s nice to know that life moves forward in different directions. That there’s more than one synthesis solution. That a “set-back” might not be a set-back at all, but just a different (possibly even more efficient) forward reaction.

Since dropping “The Class That Shall Not Be Named,” I’ve found a lot of time for myself again. I’m getting eight hours of sleep. I have an hour to spare in the dining hall every night. I’m able to step away from campus libraries and into city cafes to get work done. My grades have started an upwards climb. Things seem to be falling back into place again.

And perhaps that’s the true beauty of a synthesis question. If you start with the starting materials, it’s strenuous and difficult to get to the final product. But if you begin at the final product and take a look back, the chain of reactions are easily seen.

In the moment of making a decision, the future looks really uncertain. But looking back at the decisions we’ve made and the people we’ve become because of it, it all just seems to make sense. Because, my friends, we don’t make the right decisions. We make the decision right. So whether life takes me through the planned synthesis or not, we’ll be ok. Because waiting, just around the corner will be an entirely new one: 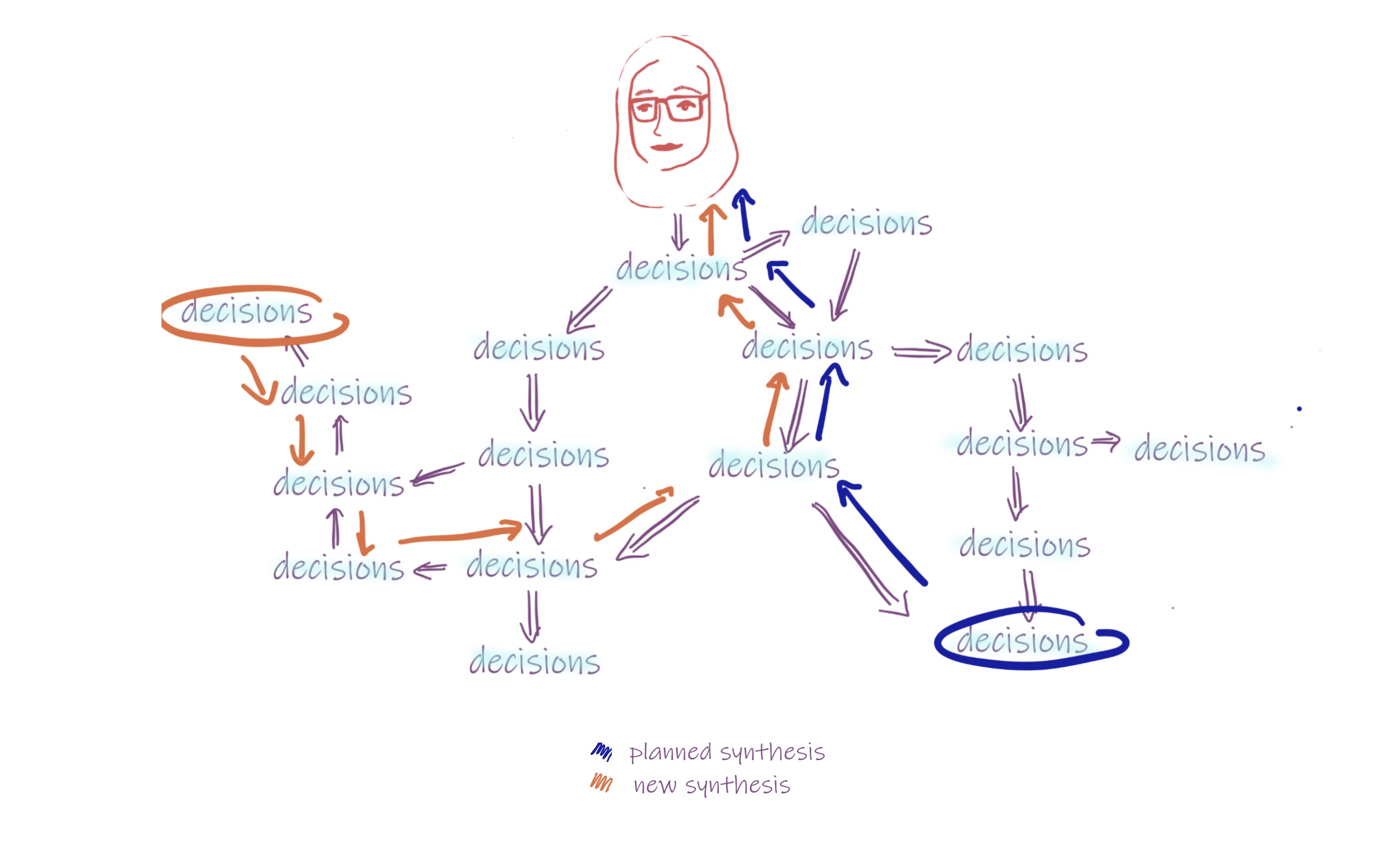