In the middle of an already-packed IAP, I received an email: I’d gotten off the waitlist for blacksmithing!

I was in a phase of trying to remember that I am a writer. I seem to enter this phase every time an important task in my life, such as a semester, ends, and I am adrift, searching the empty cavities of my skull for words.

I was busy and not sleeping much, however, so few words appeared. Hitting metal with a hammer seemed like a solid second bet. Besides, I’m out here to gather new skills and experiences to weave into stories later on. Blacksmithing, as a meche and a fantasy writer, seemed like a perfect thing to pick up.

So I came into the forge, in the basement behind the glass, the place I’d eyed without knowing it since my first tour of MIT. There are displays of glasswork, and wrought iron candlestick holders which remind me of my Baba’s shabbos candles. The door handle is a beaver cast in bronze.

forge tools, mostly punches
the forge itself!
in the back you can see the power hammer

The forge itself is full of tools, many of which were forged down here and never left. There are many sizes of tongs and hammers, punches of all shapes; everything you need, and lots of things you don’t know how to use. The place smells like coal dust and smoke, and during open forge you can hear the ringing of hammers and the thunk-thunk-thunk of the power hammer.⁠01 I am learning some names of things while writing this blog. I’m not sure if this stems from being a visual learner, such that names people tell me don’t stick, or just from having insufficient regard for the proper names of things. Kvothe would weep. Anyway I just googled 'big automatic scary hammer.'

The IAP class lasts three days, during which you make a hook and one other project. In the exemplar they show you, making a hook takes about twenty minutes; when they set us loose to do it, we each took about one hundred twenty minutes.

After you’re certified in the IAP class, you can show up for open forge whenever you like. Open forge takes place once a week, usually on Mondays or Wednesdays, for two hours.

My first class, I made a hook. I thought I would just explain it but then realized I already did so in my IAP blog because I really liked the process, so uh

First you forge a taper (or point) into the end of the bar, then bend it over the anvil, hammer it in towards yourself to make a curve. Then you do that again, in larger scale, to make a hook. Repeat that on the other side, so you have two hooks. Then heat the middle, clamp one hook in a vise, and twist.

Forging feels old. So much thought goes into the process of any project: where to hammer to create a certain bend, how to heat just the part you wish to bend, what order to work in so that you have space to hammer where you need to. It’s a skill you have to develop through practice, trial and error.

There’s also a deeply physical aspect to forging. We have a power hammer, but it’s mostly used for hitting things very hard in one direction. Everything else you have to hammer by hand. Iron bends more easily when it’s molten hot, but you’ve still got to strike true.

The second day of classes, I was massaging my forearm and an instructor asked, “Getting tired?”

“Oh, I have carpal tunnel.” I was real proud of my delivery: perfectly neutral, not stressed, even though I was. Good job, kid. Say it like that every time.

“Oh,” the instructor said. He might have then reminded me to take breaks, then left me to it.

The forge is surprisingly a good place to manage carpal tunnel, though, because it’s so individual. There are a lot of people in the forge, but not a great deal of conversation; it’s hard to hear each other over the clash of hammers. Generally once we’re taught safety basics — don’t grab things that might be hot, etc — we’re left to our own devices. I really appreciate this. Negotiating with pain, I can get caught in my head; I like the freedom to pause and breathe if I need. I take breaks while the iron heats in the forge, rest my hands and stretch my muscles, so that I can focus on hitting the iron hard and effectively while it’s hot.

Also, showing up in cotton shirts printed with skulls and steadily developing muscle in my hammer arm is an excellent vibe. 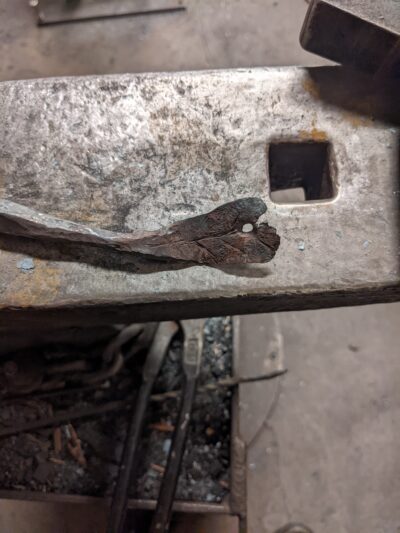 The open forge is a great set-up for pursuing personal projects. You can come in and make hooks and leaves ad infinitum, if you wish. Or you can come up with wild ideas, and if you don’t know how to bring them to fruition, the instructors probably do. One person forged an axe head, another a hummingbird. It was so cool watching other people’s craft and process.

With each project, I’d watch a few YouTube videos of similar projects and try to note the techniques: where to hammer on a curve to get a certain bend, how much to let the metal cool before returning it to the flame. Then I’d try to develop my own process, and ask for help only after I’d failed enough times on my own. I felt like I was able to develop not just my forging skills, but also my approach to learning any new skill.

I went to open forge almost every week, and here are some of my projects at the end of the year: 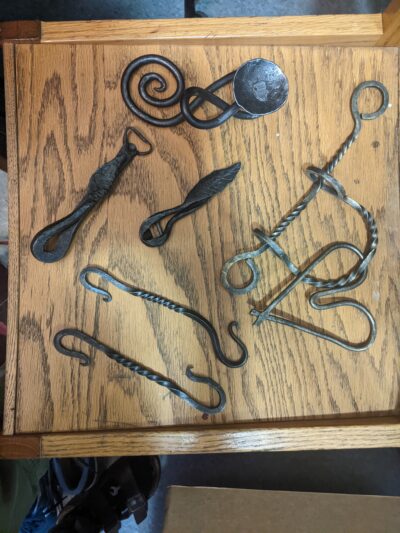 I think leaves are real cool.

Midway through the semester, I met Sulli Y. ‘22 at a writing conference. She told me how she apprenticed with a pottery artist during her gap year. Over the course of her apprenticeship, she made 100 mugs and 100 faces. That seemed like a fantastic way to develop a skill. I said, gleefully, I’ll forge 100 leaves!

Leaves take a while, so thus far I’ve forged, like, six, but the sixth is distinctly better than the first.

my first leaf!
final leaf in the final bottle opener

I will likely not forge 100 bottle openers, but I plan to forge a few more. My second was totally better than my first, although the design I made didn’t fully work as planned, and I had to weld on a back piece so that it could properly open bottles.

There are a few exemplars in the forge, mostly knives and swirls. And this wicked cool puzzle! 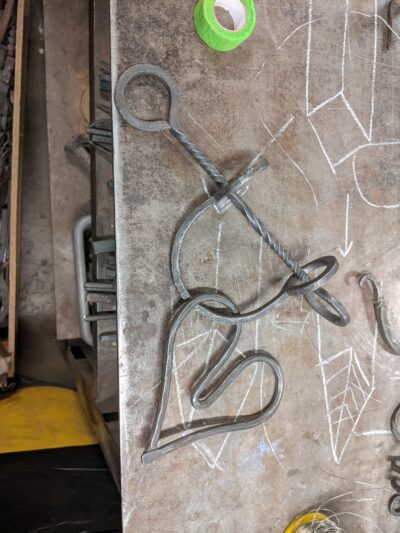 The goal is to remove the heart from the other two pieces. On the first day of the IAP class, I stared at it and clanked it around for five minutes. Then someone who knew the trick tried to solve it, and forgot the trick, but seeing them move the heart in a certain way helped me understand how the puzzle worked. I took it back and fiddled some more, and then suddenly the heart was free!

I put it back and took it out, thoroughly impressed.

Here’s how it works — if you want to solve the puzzle for yourself, pause before 00:30.

At the end of the year, I decided I wanted to make a tavern heart puzzle myself.

I like the craftsmanship of this piece. The center of the heart has to be long enough to poke through, and the circles have to be wide enough to let it. Everything needs to be sized precisely for the heart to be able to escape, but the other two pieces to remain locked together.

I studied the pieces and thought about how to forge them. The bent loop came first. Then, I made the straight loop around it, since the two can’t be taken apart or put together once they’re finished. 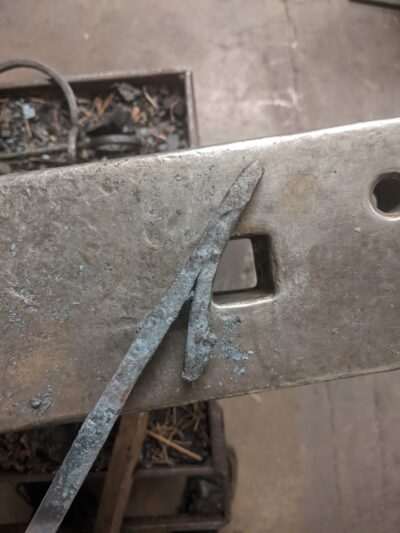 Next came the heart, which could be forged separate from the other pieces. I spent one half-day just learning to forge weld, so that I could bind the ends of the heart together. It’s an interesting process, very different from MIG, TIG, or stick welding. 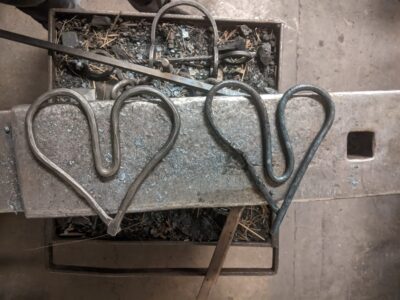 My first heart attempt went awry; it was hard to keep all the bends and curves the way I wanted. My second attempt, I planned the order of operations more systematically, and the heart came out more or less as planned. I kept checking sizes against the original, and you can place the original heart and my copy on top of each other almost exactly.

This was my last project of spring semester, and I finished an hour or so before the end of the final open forge. I quickly⁠02 actually this process takes ages, you gotta clean up every surface of the metal. 'Quickly' is maybe an hour? ran it through the grinder, re-heated the metal, and applied a golden polish. 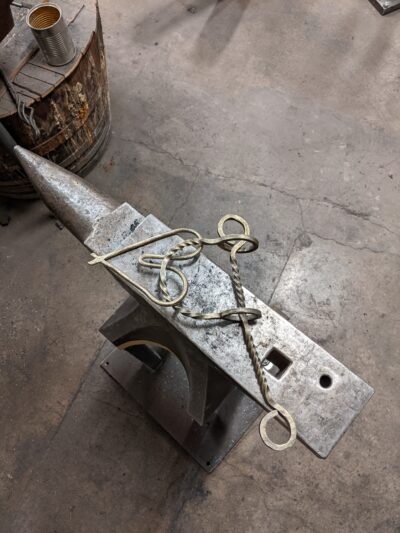 I enjoy showing this puzzle to people with the intro “You don’t have to solve this, but look what I made!” and then watching them sigh, like, “Amber, it is 12 am. And now I do have to solve it.”

Then I sit there for several minutes while they clank the heart around. I offer to show them tricks, since I myself never solved the puzzle without tricks; they refuse. Do they at least want a hint? No.

Having bent all the pieces into shape, I’m not entirely convinced they’re solid, cold metal now; I keep thinking that a hard yank could just break the heart free.

Eventually, I’ll hear “Aha!” and the person I’ve saddled with this puzzle will pull the heart out, eyes alight.