6.046 (Design and Analysis of Algorithms) and I have an interesting relationship this semester, one that’s partly tortured, and partly beautifully soul-consuming. Still, on October 10 at 6pm, I can feel my brain starting to unspool from the rest of my body. I need a break, and luckily, I can get one.

I put on a light jacket, text a friend who wants to meet at the midpoint between Random Hall and the Student Center, and then I head to the gas station to grab a few drinks. Fifteen seconds outside, and I’m already aware of my miscalculation. I need at least three similar jackets atop the one I’m wearing to feel any warmth. It doesn’t matter; I won’t be outside very long.

Done with the gas station, I head toward my intended midpoint, and see my friend Kamoya approaching me, in a significantly more reasonable-looking jacket. We take refuge from the wind in a nearby bakery, Flour, while we talk about our pset-heavy weeks and order an UberPool.

Kamoya is Nigerian like me. He lived in Lagos for several years before moving to the United States. As such, we find ourselves inserting bits of Nigerian jargon into our speech, much like we do in our texts. “See wahala”, and “chai” and “sef”. He’s a course 6 junior, and I start to wax philosophical about feeling like a senior, old and almost out of the Institute, tucked tightly into an unlit cannon about to launch me into the oft-called “real world”. Except it’s less weird when I express this fear to him. He always assures me I’ll be fine.

The UberPool arrives, and a dollar and fifty cents worth of travel later (that ends up being seven minutes, quite surprisingly), we are in a different part of Cambridge, quieter and more suburban, dominated less by restaurants and bars and small-business stores, and more by nice, similar-looking apartments. We knock on what we think is the door; a woman surfaces and tells us we have the wrong place. We try a different route, and I get my phone out to call Philip when Kamoya locates a promising side-door and directs us there. It’s dark and a little cold, although a little is gradually making way for a lot, but when we knock on the door, and it opens, the light that spills outward invites warmth with it. Kamoya and I head in, closing the door behind us.

Philip’s place is amazing, even without the dominating context of my tiny dorm room to provide mental contrast. An expansive living room blends into a kitchen, and a flight of stairs winds up to the left. I hug Philip. It’s been forever. Like Kamoya and I, he’s Nigerian. Course 6. He graduated a few months ago and now works at Akamai, a nearby tech company owned by an MIT Professor. We catch up in straight-up pidgin English, as I take in the apartment. I wish him a happy birthday, because it’s his birthday. We’re introduced to housemates, to other fellow MIT students who arrived before us. Some of them I already know; some of them I have no more than the distant familiarity of “hey, I saw you at the Infinite Corridor like five times this semester”.

Over the next several minutes, more guests filter in. But the main cavalry hasn’t arrived yet. We’ll know when they do.

Already, I’m aware of how ensconced in my bubble I’ve been this semester. Lots of new faces. I talk to many of them, though invariably end up finding Kamoya and catching up in greater detail.

Then the main cavalry arrives. Hassan Kane and Kayode Ezike and a dozen other members of the African Students Association. They come bearing delights, rice and plantain and chicken and several variations of stew, soda and juice and Malta (I squeal in delight at this, I haven’t had Malta in forever). In a matter of seconds, the atmosphere transforms from lively but subdued to absolutely electric. Someone puts on some African music, and it fills the room, boosted by powerful speakers. Over the sounds of P-Square and D-Banj, everyone talks. I talk to even more new people, which never fails to feel at least slightly terrifying for reasons I’m still trying to decipher, but I notice I’m more comfortable than I usually would be. Themes emerge; many of us came from far away to be here; many of us are buried in problem sets and research work and job-hunting prospects (it’s only been a few weeks since career fair ended). Many of us can’t wait to dig in on the food.

Hassan momentarily stills the friendly chaos so that we can all wish Philip a happy birthday. We make Philip give a speech, because of course we will. He tells us that we’re welcome to his place anytime, and he’s happy to host more ASA events there. And then it’s time to eat.

We help ourselves to the dizzying array of food (nearly all prepared by ASA volunteers, fellow MIT students), and I’m reminded of home, in home-sickness pangs. It’s a strange feeling to have, after months of…not distance. A kind of aloofness maybe. But it’s a welcome feeling, this nostalgic undercurrent. 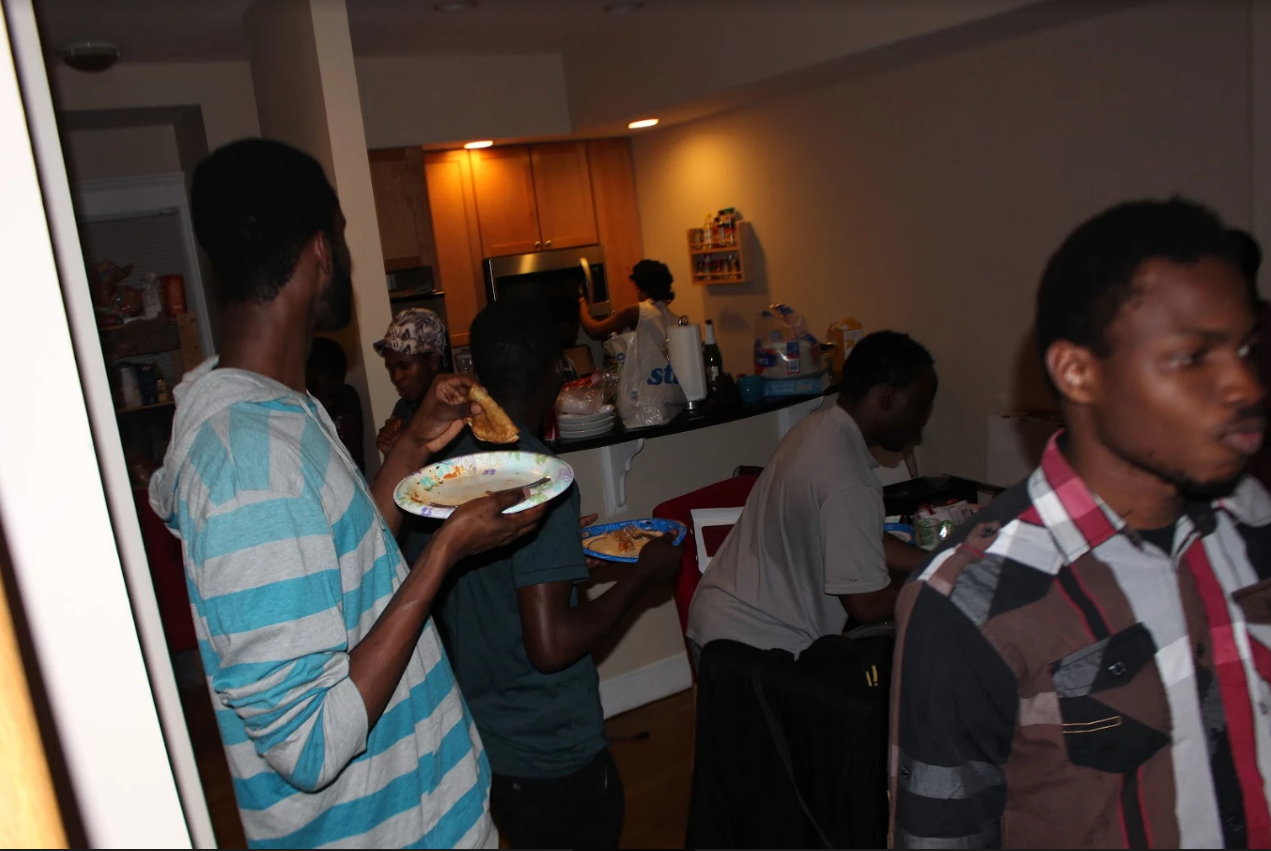 Rachel Adenekan walks in a short while later. She’s one of the earliest friends I made, back when I was a pre-frosh. Gosh, those memories. “Who are you?” she asks playfully. “I have no idea who you are.” It’s been a while. I end up playing along. “I’m Vincent; it’s nice to meet you.”

A while later, Kamoya and I start talking about Nigerian culture when the music intensifies, and the dance party starts. The moves on display are cross-cultural, a tangle of African pop and African-American hip-hop. Lots of dabbing. And azonto. And waist-whining moves I can never do justice with words. Countries are represented–Ghana and Nigeria and South Africa and Rwanda and Jamaica. I don’t represent Nigeria, because my “bunny dance” is far too removed from the dexterity on display here today, but I cheer and scream hard when Kamoya and Kayode represent us. 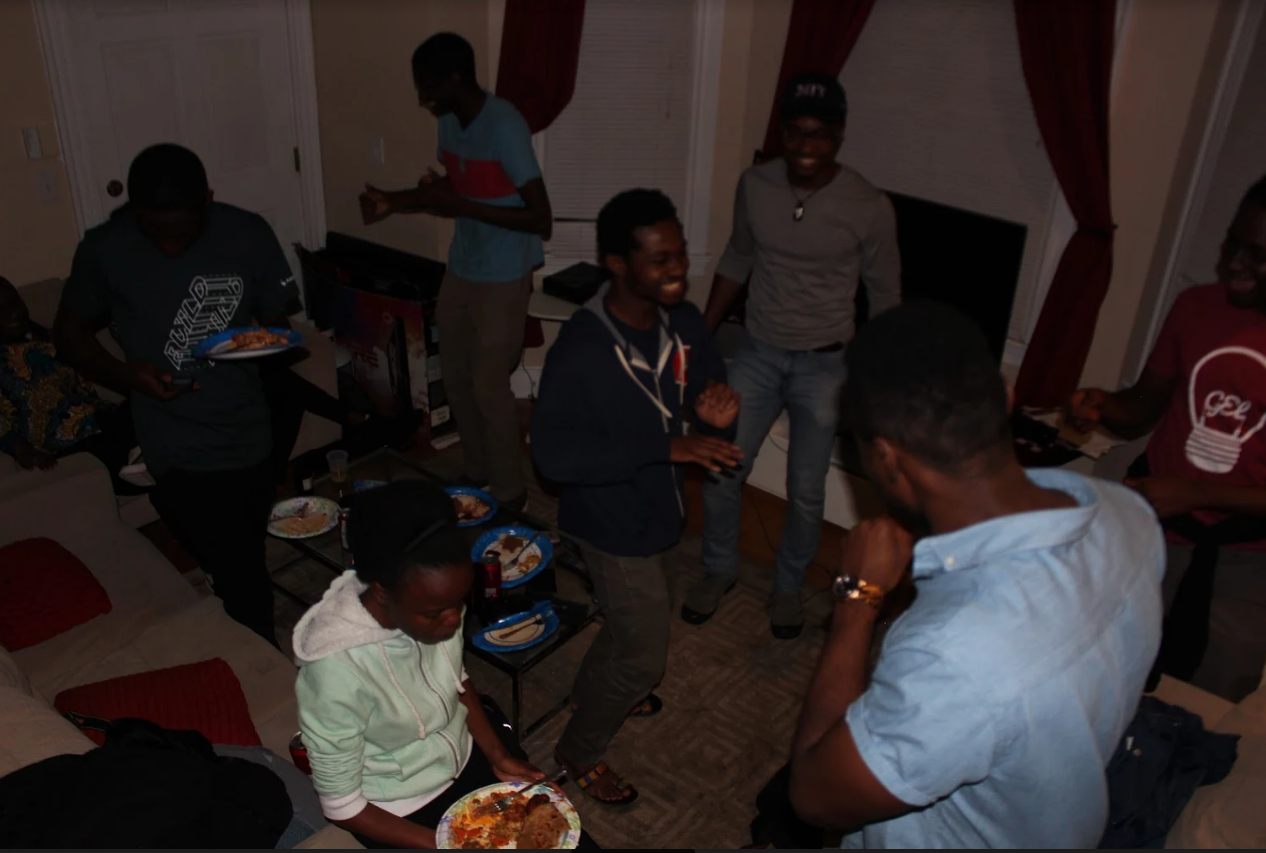 It’s such an intensely familiar world, even in its novelty (these are after all new faces in a place I was setting foot into for the first time). But the songs evoke a time before America, powerfully enough to thrust me back in full grasp of those memories. And the dance, the playful banter, the loose jargon, makes me feel like I’ve teleported, left MIT and America for a bit, election animosity, problem sets, crazy weather and all, yet there’s still some grounding in the current time and place. We are after all MIT students and I spend some time talking with Isaac about his interests in machine learning and the gaming industry.

The dancing continues for a bit. Kayode takes lots of pictures.

Soon, the event starts winding down and people start leaving (hint: most of the food has been vanquished). 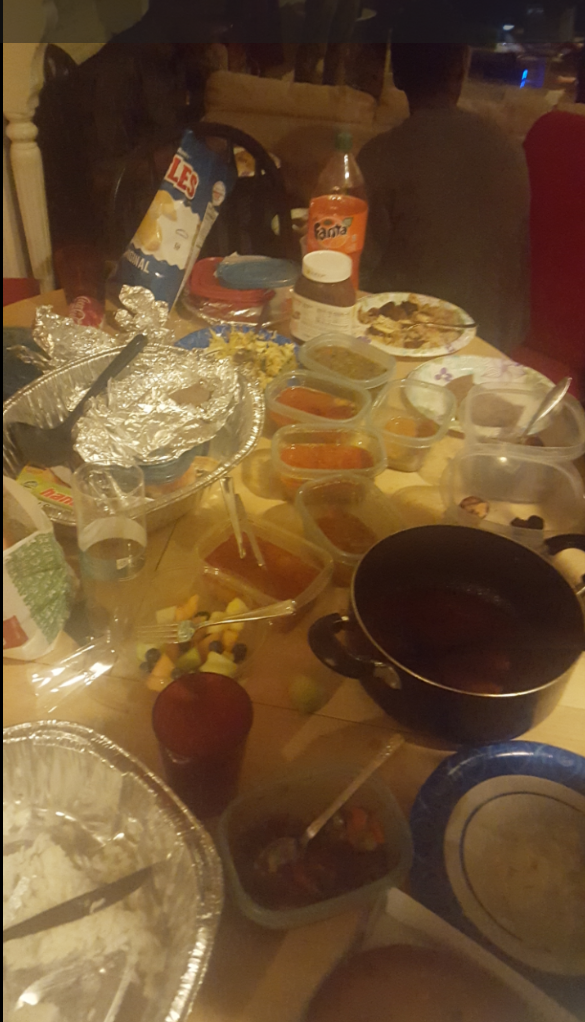 I give Philip one last hug before heading out. He looks incredibly happy, content, and that single expression becomes one of my ultimate goals for post-graduation. Whatever unpredictable circumstances abound, I want to use words like “ensconced” next to words like “content”. Not to say that I’m not content now, because I very much am. After a fairly rough last semester, this semester’s looking up, very challenging without being constantly draining. I’m achieving something of a balance, and I’m learning that part of it comes from integration–integrating my current culture with my African heritage, and more generally, integrating all parts of myself–the writer, the computer scientist, the African, the little kid, the growing 20-year-old adult. It’s much easier to say, and much harder to live.

Kamoya and I and two others walk home, of which there are clearly multiple kinds. I’m mostly quiet, while they talk–argue passionately in fact–about South African music. Then the topic switches to Nigerian writers. Then we’re back in MIT. I bid Kamoya and co farewell, and head into my dorm, where an unfinished 6.046 pset waits for me. Naturally, I check Facebook instead, where a group chat with members of the ASA is underway; we’re discussing which country won tonight’s danceoff. I rewatch one of the videos I recorded, the one below.